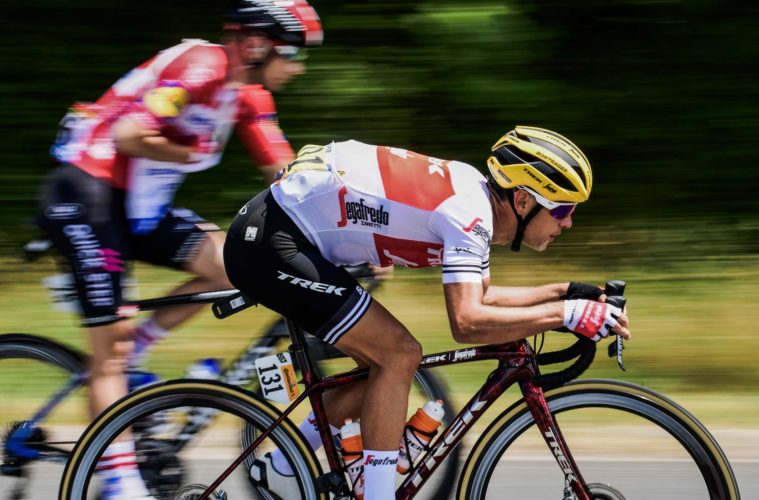 Watch out for the wind, it can create havoc! That’s the lesson for a host of GC specialists from stage 10. There is a long list of winners and losers on the eve of the rest day. Here’s a summary of a frantic race over the hills – and in the wind – of the Tarn department.

The top 10 of the 10th stage suggests it was “one of the sprinters” but the big story of the day comes from a split in the peloton that began to open up with around 40km to go.

The irony of it all is that the team that started the echelon action, EF Education First, would become one of the big casualties.

One moment, the peloton seemed to be in cruise control. Within the blink of an eye, there was a mass of pink up front.

“We tried to take the front at around kilometre 174,” said EF’s Mike Woods, with considerable precision, suggesting that the move was entirely premeditated. “We figured that would be a good spot to go.

The Canadian had already lost considerable time after his accident in stage eight but he offered an overview of how the echelon formed… and how his team lost out because of an initiative it instigated.

“Unfortunately,” he continued, “I think it was just a touch too early as we got swarmed. And then, in the chaos of things, [we all] ended up in the second group.”

When the split formed quickly, the yellow jersey, Julian Alaphilippe, was still in the front group. He was surrounded by Deceuninck-Quickstep team-mates and suddenly there was a genuine sense of urgency.

As we’ve come to expect in a scenario like this – when wind and aggressive racing claims a few scalps – Luke Rowe then took over the pacesetting. A strong surge opened the gap further and almost as soon as the break began, pink turned to burgundy.

Seize the day, they seemed to say.

Another surge ensued, this time it was the yellow and black of Jumbo-Visma who, despite knowing that its Kiwi in fourth overall at the start of the stage, George Bennett, had been spat out the back. “I’m 100 percent here for Steven Kruijswijk,” insisted Bennett at the end of the first week. And the Dutchman is one of several beneficiaries.

After that initial surge, the difference between the two main pelotons had grown to just over 30 seconds.

There seemed to be a minor reprieve, with Bennett the main casualty… but other GC riders who were caught off guard were almost within sight of the front bunch. Their chase, however, was futile. In the closing kilometres, they were in damage control but it wouldn’t be enough for some to maintain their fighting spirit. 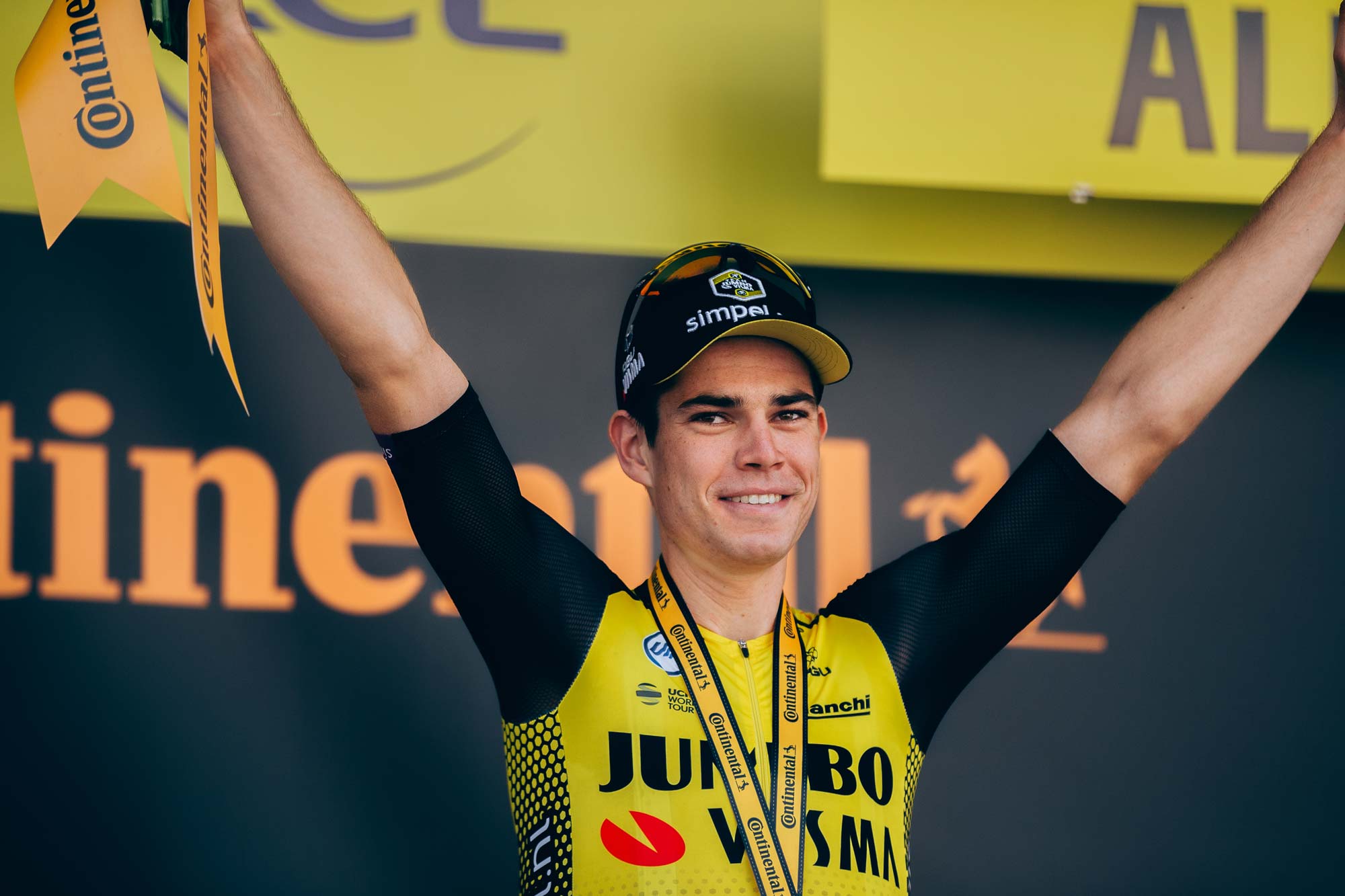 Wout van Aert (above), a late addition to the Jumbo-Visma team and already a winner in stages 2 and 10…

The French darling of stage eight, Thibaut Pinot – third overnight – was fuming at the finish. He realises the consequences of a brief moment of inattention. He was amongst the group of 10 that finished 1:40 behind stage winner, Belgian sensation Wout van Aert.

Pinot, a favourite before the Tour, drops from third overall (at 53 seconds) to 11th. He is now 2:33 behind Alaphilippe. The Frenchman retained his yellow jersey by finishing 11th in the stage (nestled in amongst some sprinters in a bunch of 28 that finished with the same time in Albi.

For Belgian fans, the maiden individual victory in the Tour by van Aert is a major talking point of this tough 167km stage raced over the undulating terrain that the Tarn is famous for. Just about everyone else will be talking about the losses (or gains) of key GC specialists on the second Monday of the 106th Tour de France.

EF Education First will be wondering what went wrong. But Mike Woods was quick to state the obvious: “It’s not what we wanted today,” he said shortly after the finish.

“Quickstep did an amazing job of driving it and so did Team Ineos and we ended up getting caught off-guard. Then it was full panic stations trying to bring that group back.

“We got it down to about 10 seconds but that’s when I blew up and that was the last I saw of what happened.”

In a span of 21 minutes, the tone of the team’s Twitter feed changed significantly. It started with pride:

“Plenty of #PinkArgyle on the front just inside the final 40-kilometers. @SimoClarke is leading the charge to try to force a fracture in the peloton in the wind. No splits yet but the peloton is very stretched out in Clarkey’s wake. #TDF2019”

A little while later, it was a case of licking the wounds and searching for solace.

“That final hour of racing certainly did not go as planned. @UranRigoberto arrived to Albi, 1’39 down on the reduced bunch. The splits in the crosswinds have provided a general classification shake-up…”

Uran was far from the only loser in Albi. The list of those who took a beating in the wind, includes: Pinot, Trek-Segafredo’s Richie Porte and his Dutch lieutenant Bauke Mollema, Astana’s Jakob Fuglsang and Alexey Lutsenko, Movistar’s Mikel Landa…

The loss of some men translates to a win for others. Of those who were in the top 10 of the general classification before stage 10, only Alaphilippe, Thomas, Bernal, Kruijswijk, Emanuel Buchmann and former race leader Giulio Ciccone remain in the top order.

“It’s disappointing but the race goes on,” said Richie Porte. He only dropped from 18th to 20th. Those numbers would suggest the damage isn’t too severe but the time differences tell a bigger story: 2:19 behind Alaphilippe at the start of the day, he’s now at 3:59.

He admitted his flaws and didn’t try to make excuses. “It was just a power thing to be honest.

“When they put it in the gutter on the left-hand side, it was just a different race – and I just wasn’t up to it today.”

He tries to see a silver-lining on a day his ambitions for another high GC result took a beating, and the gist of it is the very fact that he wasn’t alone amongst other pre-race favourites who faltered.

“There were quite a lot of other GC guys in my boat as well, so now we have to do something but there’s still a lot of hard racing to come.”

The wind and undulations in the Tarn took a toll but Woods concludes our overview of the ramifications to GC of an exciting stage to Albi. His team-mate, the runner-up from two years ago Rigoberto Uran holds down 13th place, 3:18 behind Alaphilippe.

Like others, it’s a loss he could well do without but Woods remains optimistic that the mountains that lie on the horizon after the rest day will even things out nicely

“This isn’t going to be a race decided by seconds,” said the Canadian.

“When you look at those last three days before Paris, it’s going to be a race decided by minutes.”