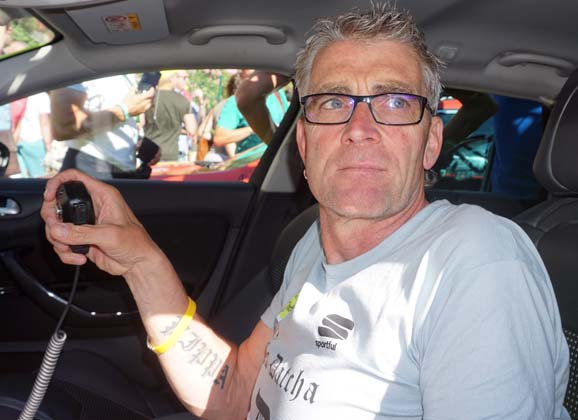 Yates on Sagan vs Froome: “A violent attack!”

Sean Yates understands the strengths of many in the peloton. He’s worked with some of the biggest names in cycling and in Montpellier after stage 11, the directeur sportif explained how he was impressed by a stage that was won by Peter Sagan. 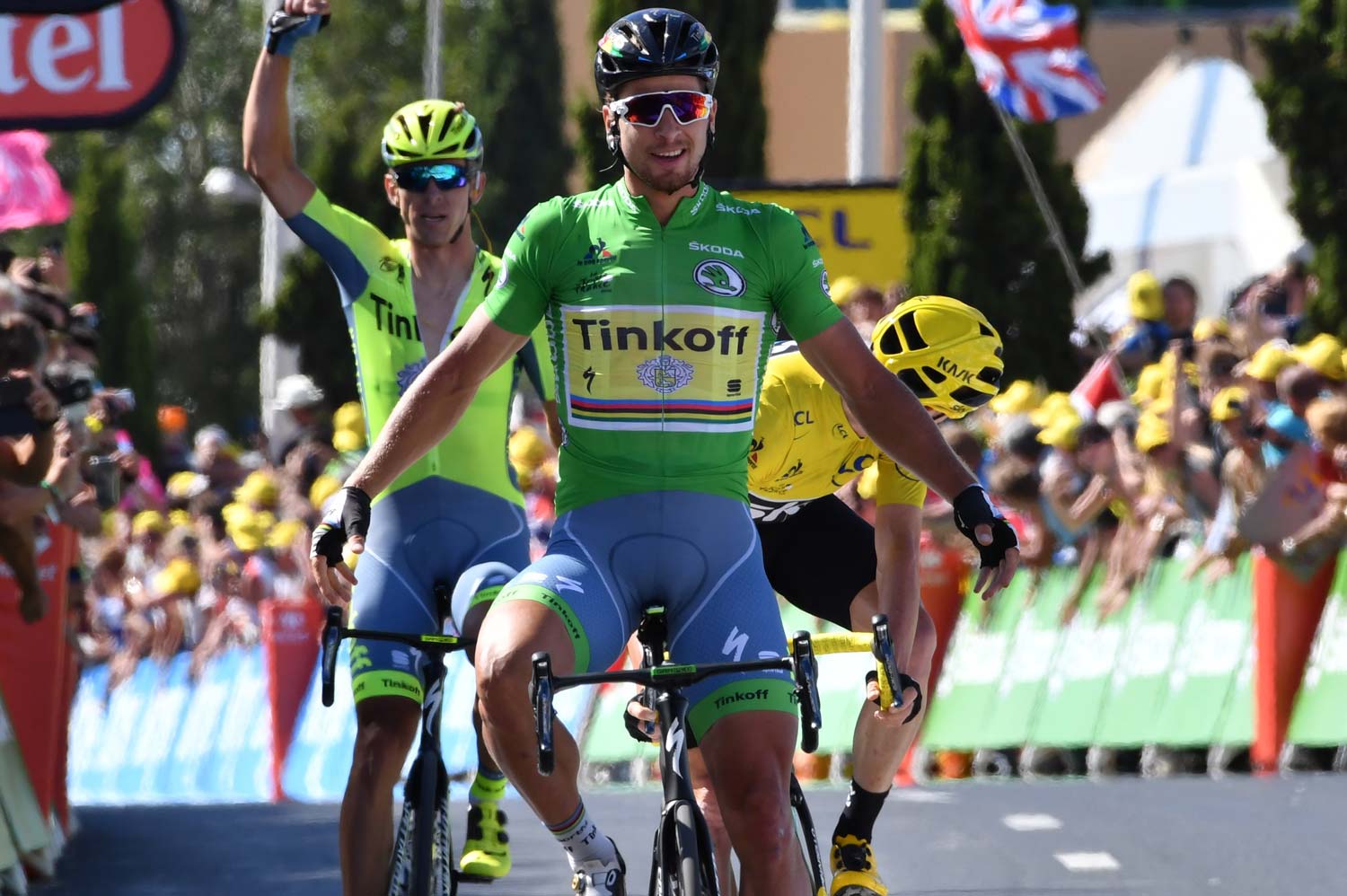 The green jersey ahead of the yellow jersey… Sagan and Froome at the finish of stage 11 in Montpellier.
Photo: Graham Watson

With a strong wind blowing this was never going to be an ordinary stage. Never mind the prospect of climbing Mont Ventoux on Thursday, the GC men and sprinters alike needed to be attentive in stage 11. It was a flat profile and a site where bunch finishes have been common in recent years but it turned out to be quite an exceptional race.

“Today was just something you cannot plan,” said the winner. Peter Sagan finished ahead of Chris Froome. They were six seconds ahead of the peloton. “It’s something special: a green jersey and the yellow jersey in the top two.”

And the very thought of what had just happened made him smirk, then giggle, then laugh. It was indeed special.

The winning split, Sagan explained, came 12 kilometres from the finish. But there had been tension all day as the ‘Tramontane’ blew the riders from Carcassonne to Montpellier.

RIDE caught up with Sagan’s directeur sportif, Sean Yates, moments after the stage to get his thoughts on what is a most memorable day of racing on the Tour de France. 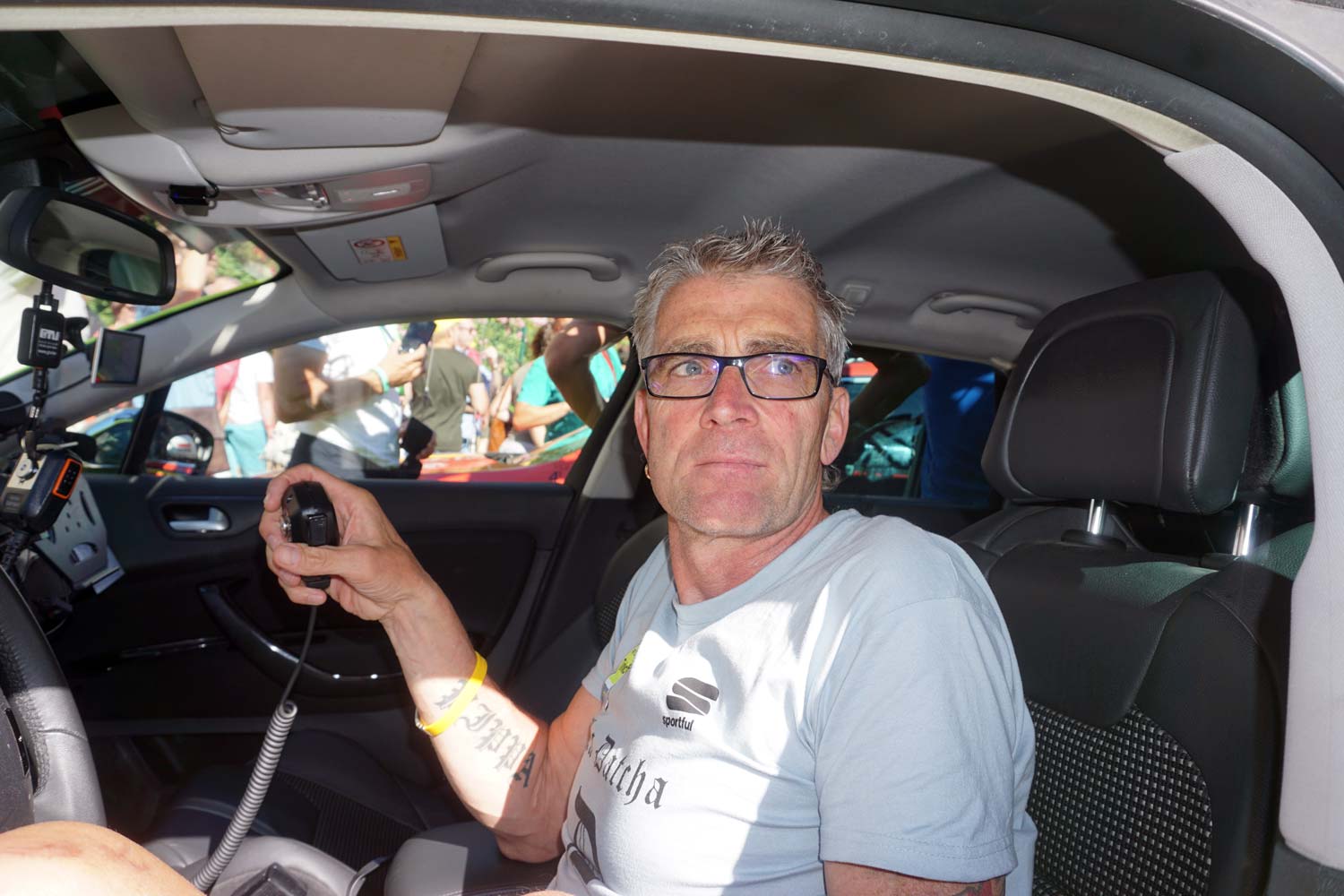 Sean Yates at the wheel of the Tinkoff team car in Montpellier after stage 11.
Photo: Rob Arnold

RIDE: That was something else. It was quite a show. Your team has won the stage an to have it done in that way is quite spectacular isn’t it?

Sean Yates: “Obviously it was always going to be a tense day and for a long, long time it looked like nothing really was going to happen until we kind of lined it out. Then Peter switched on the after-burner, from what I can understand, and when he does that – like yesterday – it’s like a 1,000cc [motor] against a 600. And that was it.

“Froome was right there, as he was all day along with ‘G’ who is the man for those occasions and Maciej Bodnar who is a beast as well.

“Obviously the shit hit the fan and it wasn’t for the want of chasing that they weren’t pulled back. But everyone in front had a big interest to stay away. And they are pretty much the four biggest engines of the whole Tour – they showed that and behind, obviously, the sprinters weren’t going to ride.

“The sprinter teams were depleted by various incidents and fatigue and that was it – totally insane really.” 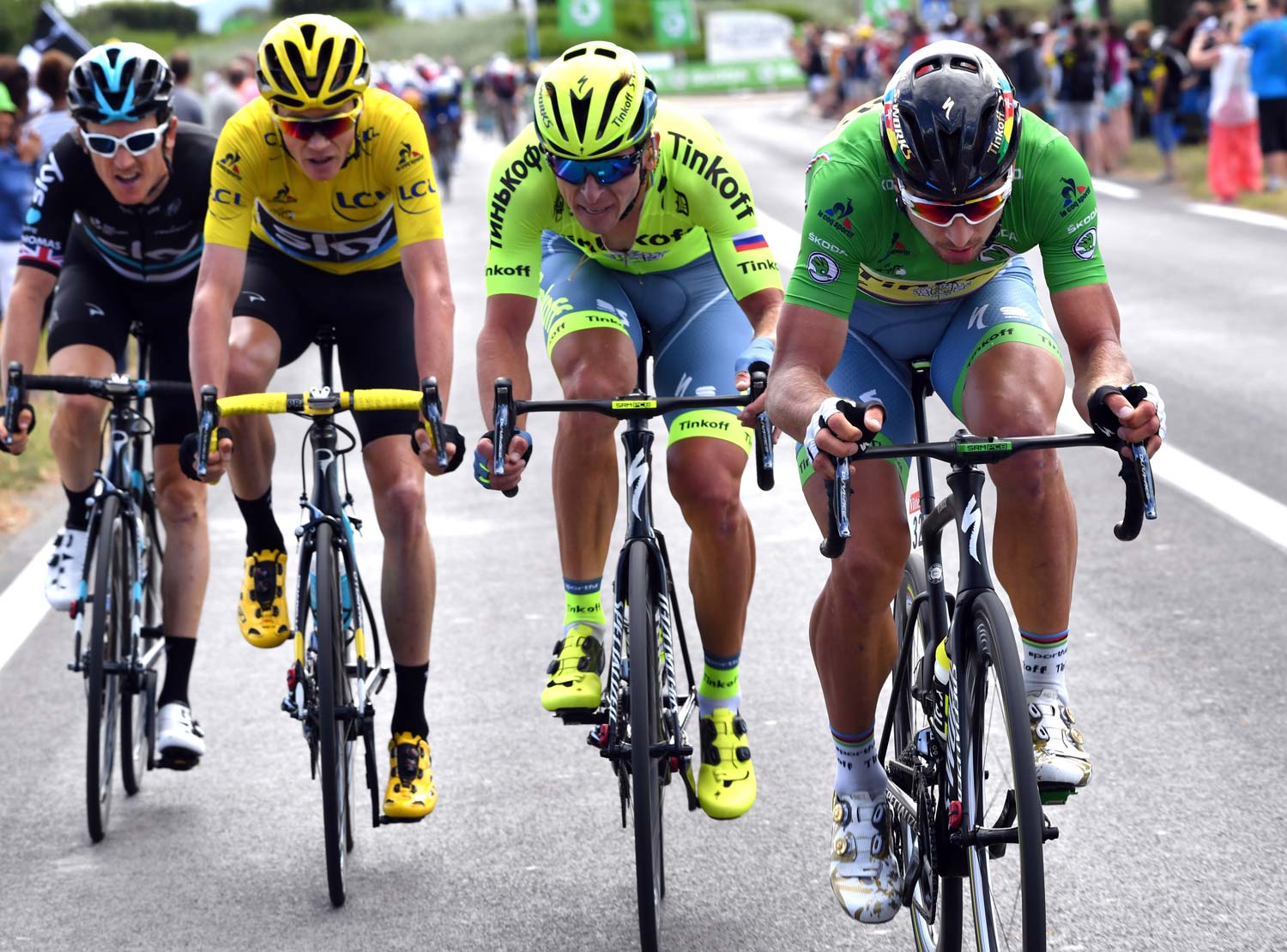 You’ve worked with all four in the break. I know we’re talking about Peter winning a stage which was exceptional but, really, Froome sprinting for second place is also quite an amazing feat. What do you make of that?

“We were in the car laughing. Obviously Froome took off on the downhill the other day. And we know he can climb with the best – and drop the best. And we know he ride in the crosswinds now. And I was saying, ‘Well, please don’t let him win this sprint! That would just be too much.’ Obviously that wasn’t to be.

“So, yeah, Froome is obviously in tip-top shape. He’s alert. He’s where he needs to be at all times and he’s got the team to put him in those places.

“At the moment, he’s extended his lead over his main contenders further so one can only say chapeau to him. Obviously he’s got fantastic legs and he’s got the ideal lieutenant in ‘G’ who is just an assassin in these situations, with those four guys.

From a GC director’s stand-point is it risky [for Chris] to chase those time bonuses when [he] knows the Ventoux is coming tomorrow?

“From behind it wasn’t as though Quintana was sitting pretty in the wheels. It was every man for himself pretty much.

“Like the other day when he did that effort on the downhill, we know all other guys behind had to do the same kind of effort and he gained another… whatever.

“Every second counts and now he’s getting on to [have a lead of] a minute so he’s just sitting pretty.” 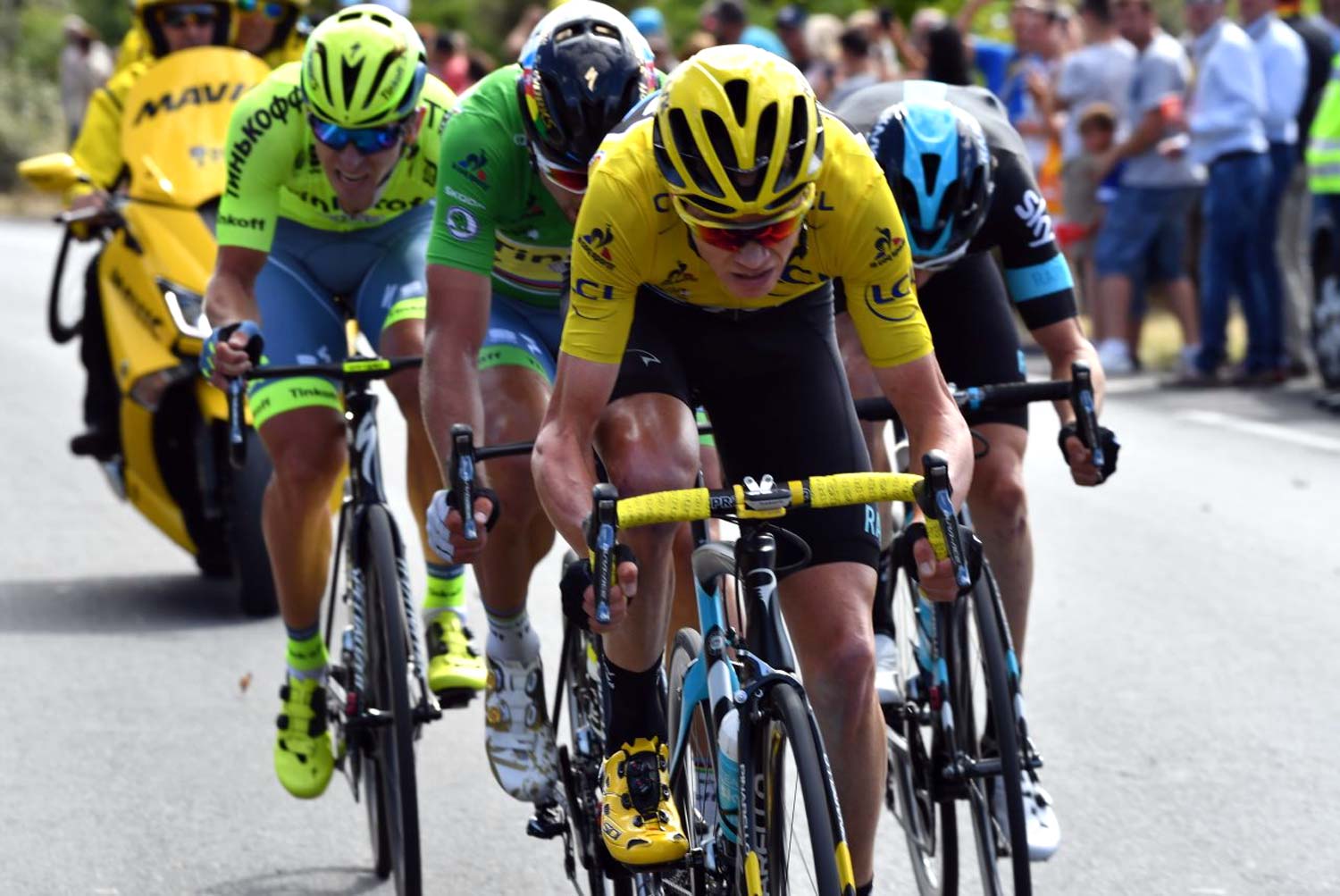 Thanks for talking about Chris when you’re the director of a stage winner. Anything else you want to add about today? It was quite an exceptional ‘transitional’ day.

“Obviously we looked at the forecast, the wind prediction and the direction, and we were thinking, ‘Okay, Montpellier – normally there are crosswinds and this, that and the other…’ all of the teams are aware of this situation and certain teams are strong in this situation. So there was a bit of shadow boxing for a long time. Suddenly it only takes one team to really, really commit and then it kicks off.

“From a long way out it’s always risky but as the finish was so close, then obviously there’s less risk involved and there’s more commitment from the people who go for it.

“It’s a question of waiting for the right time and, as I said, when you’ve got an engine like Peter…

“There are already guys getting spat left, right and centre and he just switched it up a gear and it’s a ‘violent attack’. What can you say? It’s just insane!”