Have bike, will travel. Have new bike, will explore more… because it’s a gravel bike. This is a quick intro to my second ride on the Canyon Grail CF SL.

– A blog and videos by Rob Arnold

There is going to be a fair whack of content posted about the Canyon Grail bike that I have on loan – for review purposes – for around a month. First of all, because it has given me a good introduction to gravel riding; and secondly, because there are a few funky features that are interesting to look at and surprisingly good to use. And, I believe, they deserve further explanation just in case you think – like I did – that they were little more than a gimmick when launched in 2021.

The handlebars, for example, are a stand-out: a double-decker arrangement with a thin strip of carbon-fibre at the top and a sturdy, stabilising strut down below. I’ve been calling them ‘double-decker’ because, until now, I’ve resisted reading anything about them at all… or even what Canyon has called this configuration. But, for the purpose of this article, I’ve looked at the site and discovered that they are dubbed … oh, they’re called ‘Double Decker’ – ie. they are what I’ve been calling them all along. (Honestly, I didn’t know. And I’ll explain why…)

I didn’t want to have any preconceptions about what the handlebars are all about. When I first saw them, I laughed (maybe even out loud). What now!? Oh, has it come to that? I thought, ‘Do we really need to reinvent something that’s been tried and tested for over 100 years?’ 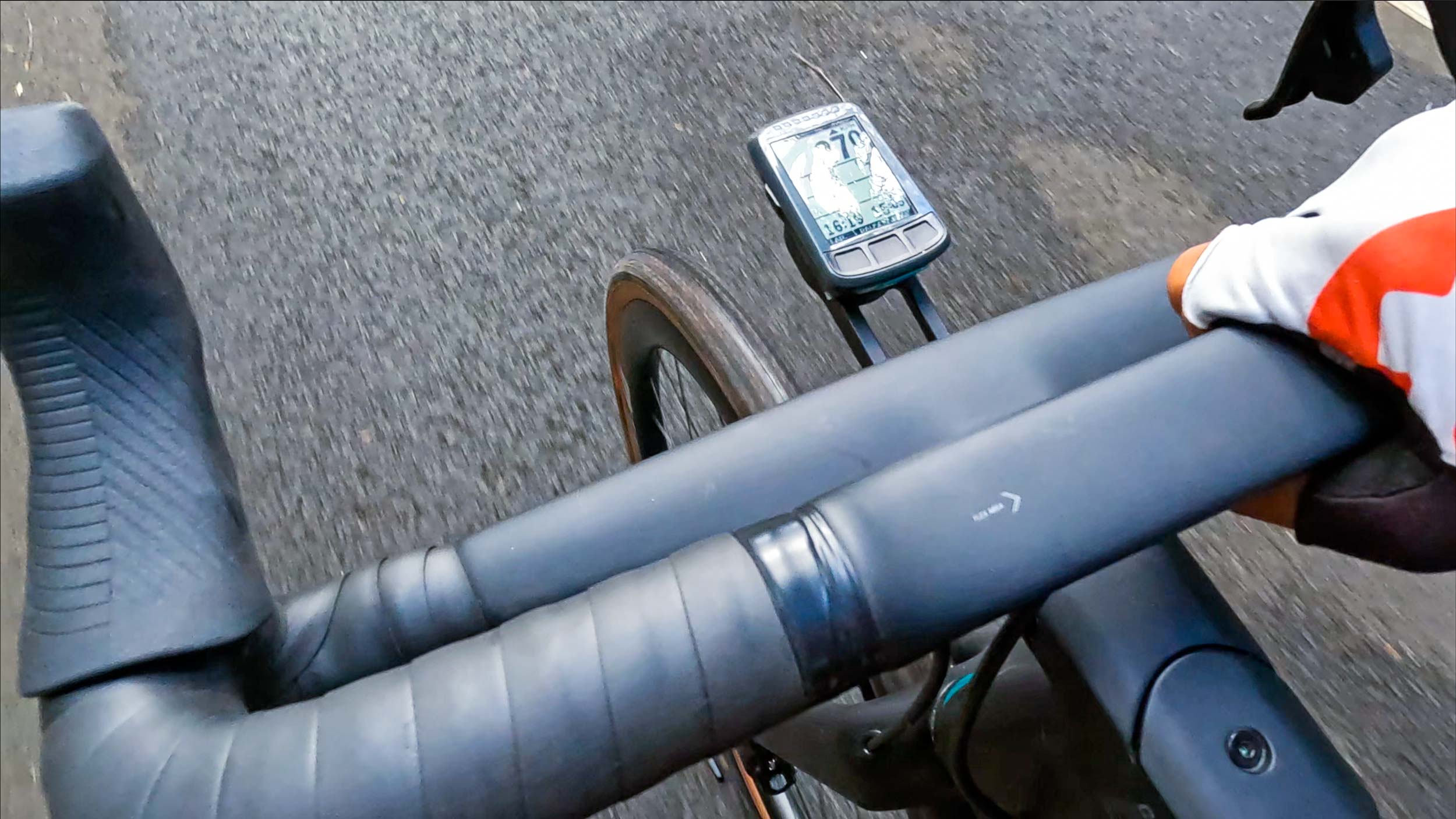 Well, once in a while, it doesn’t hurt to tweak something here or there and find out if it improves the riding experience. It is for gravel riding after all. This is an openminded, rule-free zone in the world of cycling where product design can often be manipulated (or skewed) by regulations dreamed up by an organisation intent on keeping a bike looking like a bike ought to look… (or something like that).

But in gravel, innovation is allowed. This ‘new’ cycling discipline has been around for years, and there’s a wealth of ideas about what can be done to make a bike suitable for a wide range of terrain… while not worrying about any rule dreamed up by the UCI (for example) that limits design. 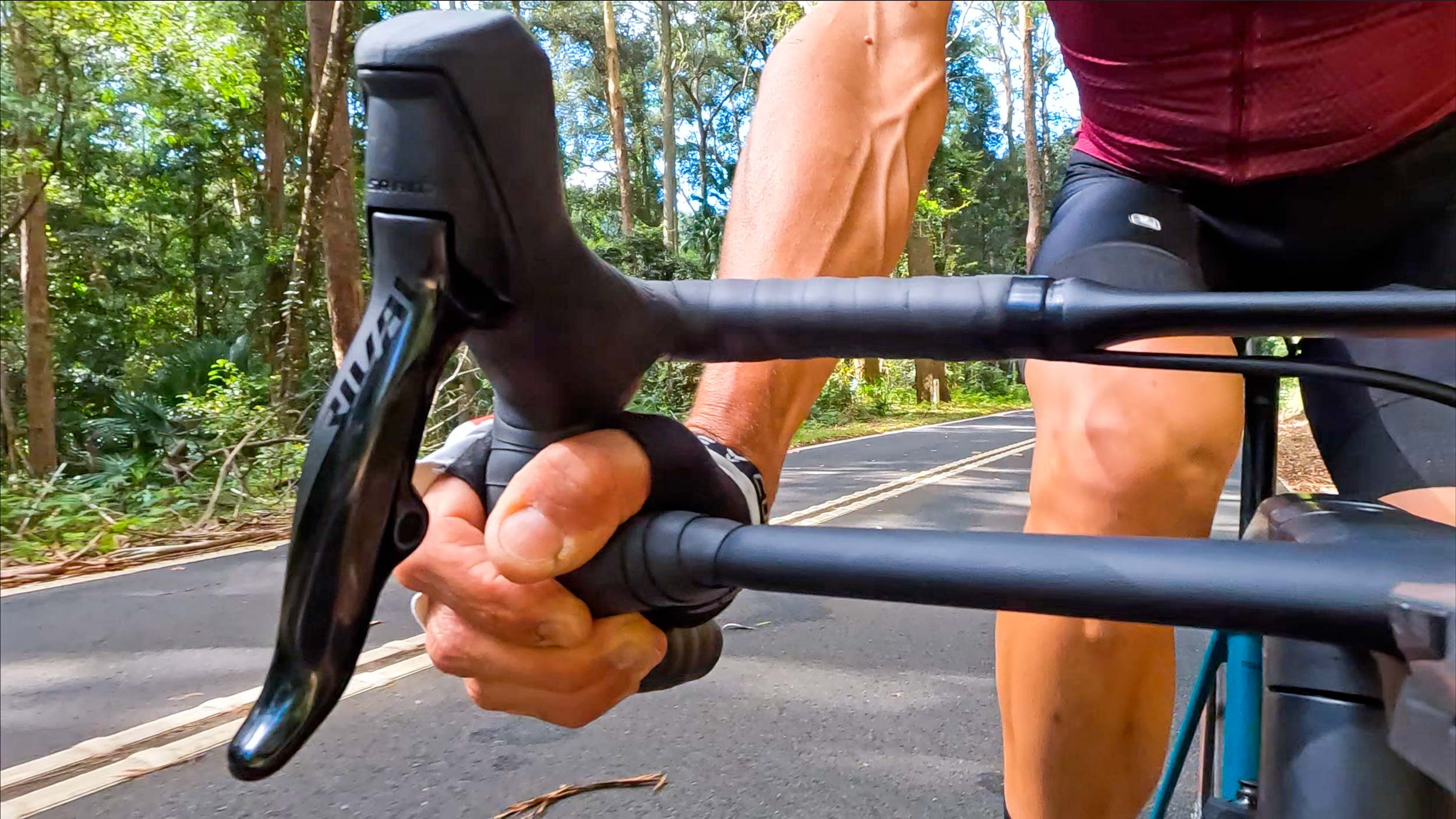 It turns out that my laughter and preconceptions weren’t valid at all. The double-decker handlebars actually really suit this bike, and I’m chuffed that I’ve had a chance to find out why Canyon has risked being mocked, releasing a product that serves several purposes.

Initially, I thought, it could have something to do with packing extra bags so that the rider gets the full gravel experience. Take bike, go somewhere… oh, and bring along enough stuff in case you want to just keep on going. That kinda thing.

And then, upon building the bike (a short and simple exercise that will feature in a future video), I noticed the words (and arrows) explaining ‘Flex Area’. Okay? Got that? The top section flexes. Oh, so it’s for comfort. Righto.

But wait, there’s more. Then, when riding around some trails in Canberra with Nathan Haas, I noticed how he spent most of the time with his hands down in the drops of his Colnago gravel bike. Over the rough stuff, he went – and he went fast – with his hands down low and his body responding to the terrain.

He sped along, taking in all kinds of surfaces – bitumen, dirt, gravel, big rocks, etc – with his (gloveless) hands in the drops. He wiggled and prompted a rear wheel drift. He jumped and cleared an obstacle. He shifted down a gear and darted ahead… and all the while, he stayed fixed in the position which he prefers to ride gravel bikes in.

This prompted me to stop riding on the tops, and settle into the drops. Lo, what did I discover on the Grail? That the stabilising lower strut is brilliant! It… provides… stability. Yeah, I’m a little embarrassed to write that because it seems a little obvious, but I’m spelling it out just in case you too are cynical about the concept.

Don’t mock something until you’ve tried it. That’s one thing I’ve learned after only a couple of rides on the Canyon Grail. 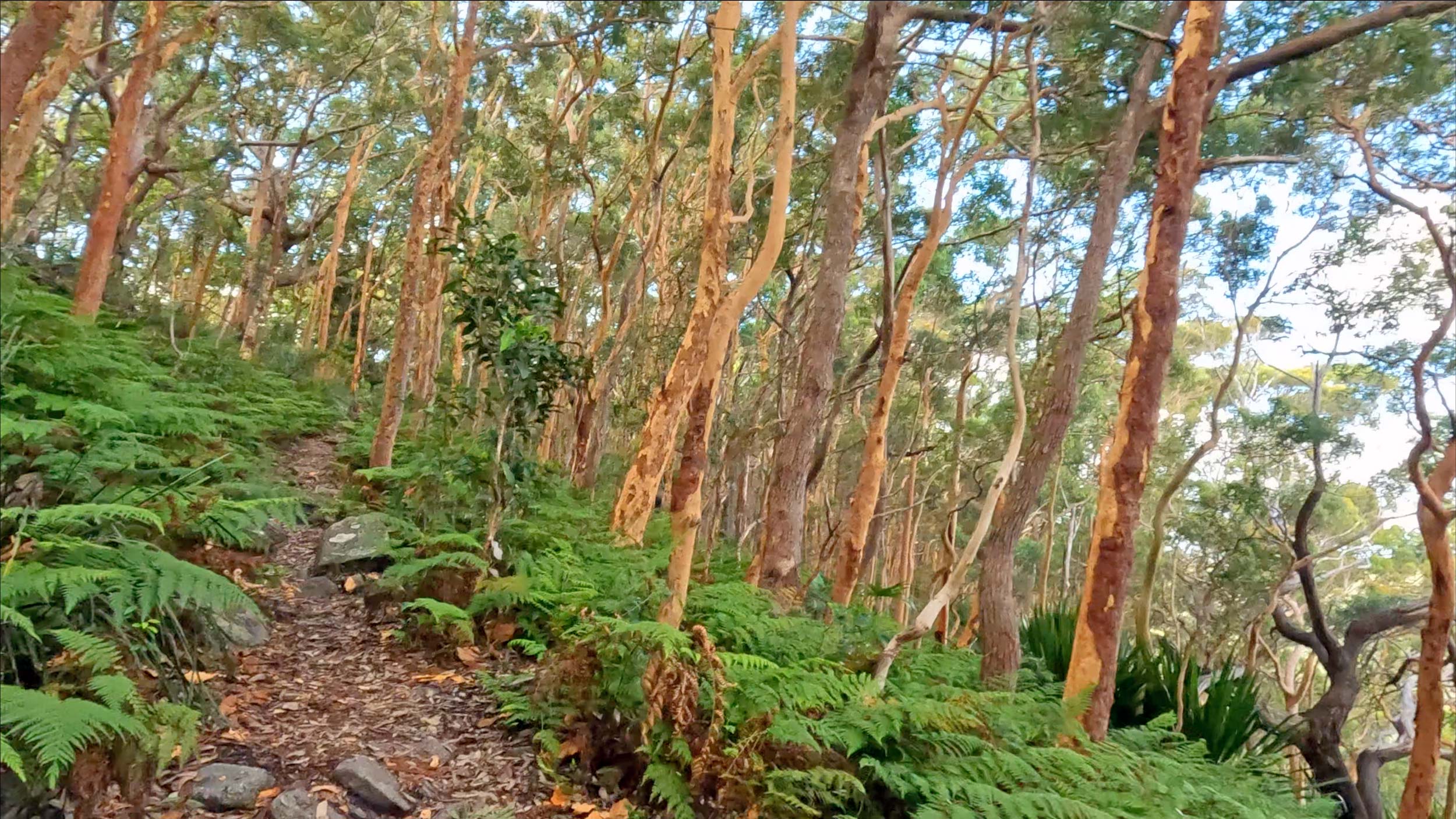 I’m going to learn a lot more about this bike in the short time I have it, because it begs to be ridden and enjoyed. Yesterday afternoon, for example, after having skipped a ride in the morning because of absolutely rotten weather, I looked up and saw a hint of blue sky. This prompted me to pack the Grail in the car and set off for some traffic-free exploration.

To the Royal National Park I drove. Well, nearby…. And, after parking at Waterfall, I clipped into the pedals and set off. All I knew was that I wanted to ride, but that was the extent of my plan. Easily distracted, I looked at a few trails and then returned to the road to get to a pretty lookout / turnaround point.

Instead of going further down the road, or just spinning around and back-tracking along the same route that got me there, I turned a sharp left, unclipped from the pedals, climbed a few stairs… and then, after getting to the top of the ridge and the awaiting trails, I got back on the Grail and rode the coastal trail going north from Otford.

I’d done a bit of this track before, but on foot, and never went far enough to find out where it ended up. And so yesterday, onwards I rode. I discovered beautiful places. I challenged myself on varied terrain. I settled down into the drops of the handlebars a couple of times and, while I rode, I took a chance to look around.

Eventually, the loose concept of a ride I had mapped out in my mind came to fruition. I completed a loop that I imagined might exist and, after around 10km on the dirt / gravel / mud (plus a few stairs), I found myself back on smooth bitumen for a fast descent to my car.

The videos attached to this story showcase some of what I saw on my afternoon ride and a bit about the bike. It’s a little bit of tourism, a bit of bike testing, and a lot of discovery.

The Grail experience is turning out to be quite an eye-opener. I’m seeing things differently because I’m taking a new approach to cycling. It’s similar to what I’ve known but with a twist, with a few modifications and a fresh attitude. It’s a bike. You ride it. You go places and enjoy the experience. But it’s a different kind of riding, and I’m really enjoying what it has to offer. 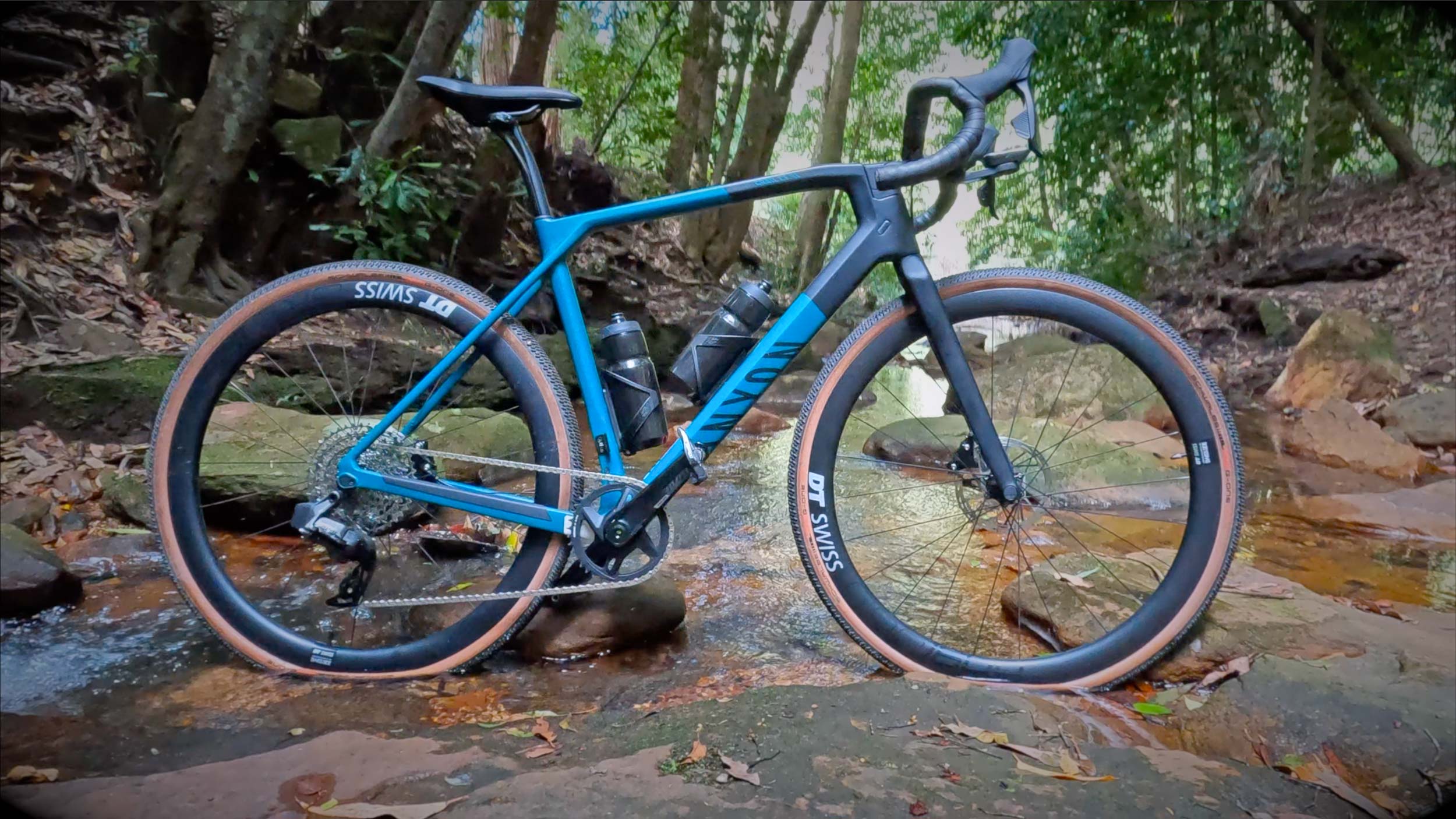