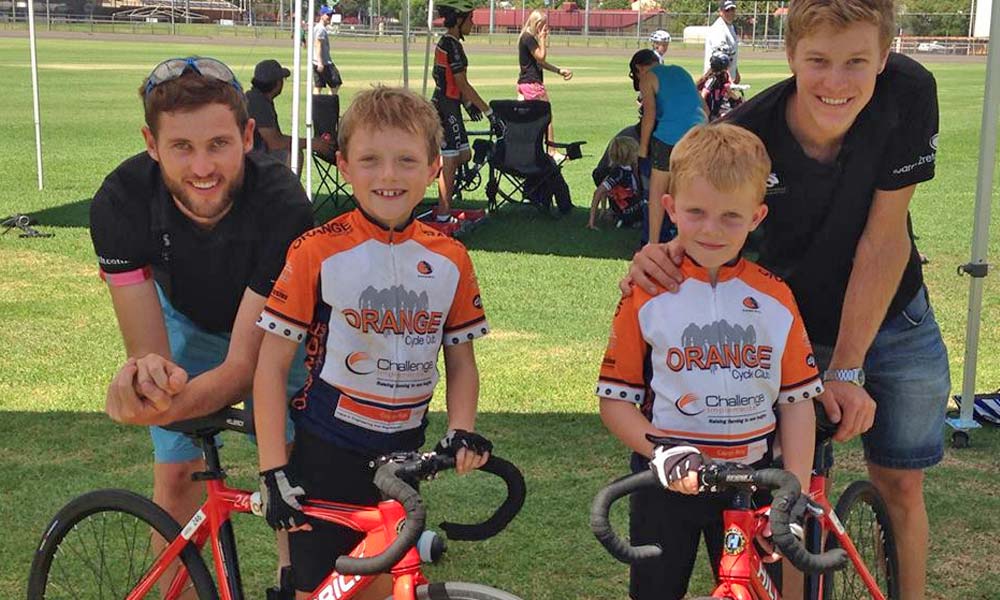 Cycling as therapy – part of the training diet

We continue the series by Tim Guy about his plight with mental health issues. This is part four.
(To read more, see the links below.)

From 2009 to 2014, my life was almost entirely spent trapped inside a mind of impenetrable darkness. Fear filled fingers gripped my throat and held me – feet dangling – whist standing on solid ground. The darkness spread into every aspect of my being and I didn’t know why. My chest was permanently tight. My head foggy with confusion. I couldn’t shake it, I couldn’t fight it. It clung like bleach to a coloured shirt.

From 2013 to 2015, although back on a bike in some capacity, I dreaded nearly every second of it.

I’d returned to the sport because I saw no hope anywhere else. I didn’t see hope in cycling either, I didn’t really believe I could learn to accept my situation. Nonetheless, this impossible possibility was all I had left.

My previous article boiled down the approach of my coach, Mark Windsor, to its basic principles.

Moulding these principles into a scaffold for direction is the real craft. The fact that Windsor did this amongst the uncharted backwaters of my mind is what makes him so damn special.

My training in 2013 was simply about learning to be on a bike for 20 minutes without bailing because of a panic attack. There was no real physical performance adaptation focus.

Racing was about putting myself on the starting line and making it from point A to point B.

The race itself was irrelevant.

The real objective was to accept the pre-race dread. The extra dose of apprehension that piled onto me the second I knew I had a race. Even if that race was three months in the future.

It takes incredible foresight to deliberately not train an athlete physically for races. It seems absurd. It is absurd – but I wasn’t an athlete. I was a 10,000-piece jigsaw puzzle strewn across an entire city. First things first. Before you begin to put it all together, you must gather the pieces.

If Windsor had tried to train me physically for these early races, I would not have coped. It was enough of a challenge just getting on a bike and riding to work.

Piece by tiny piece, he helped me to accept that mental health issues were part of my life, but not the end of it.

With the Today’s Plan data (above), Tim Guy can remind himself where he was at physically while going through some significant emotional turmoil.

For the 2014 season, I was offered another contract with the search2retain NRS squad. My best mate Angus Tobin had signed with the team again, so I went for it. And I think it’s important to underline Angus’s impact in this period of my return – without him I would never have been able to bring myself to sign anything. Let alone do it year after year.

I’m not really certain why search2retain signed me again. I guess it was twofold; they saw the struggles I faced and wanted to provide me the chance to come to terms with my past.

Secondly, I think the team’s management saw the positive influence that Angus and I had on each other. We were from the same town, we could travel to races together, train together, and I was good at knowing how to motivate him during races.

Windsor utilised this to give me direction and goals at competitions. He encouraged me to take my attention off myself and place it onto understanding how Angus was – and, in extension, the rest of the team – to see if I could utilise my understanding of fear to decipher how normal levels of anxiety affected individuals throughout a race.

I was challenged to start utilising my anxiety for benefit. 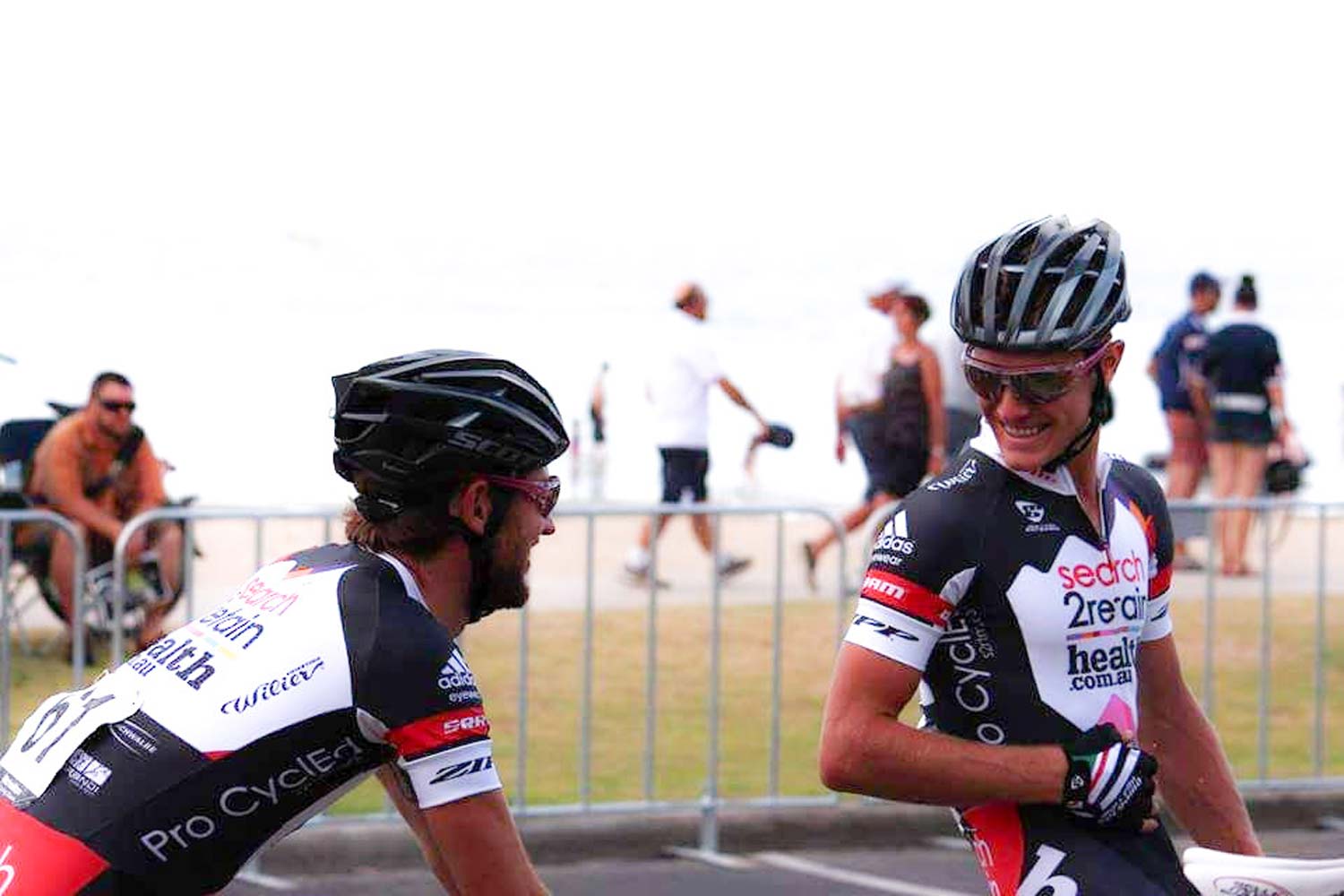 My first races of the 2014 season, were the ‘Bay Crits’ and the national criterium and road race championships. I didn’t finish any of them. I tried to find value in observing others, in understanding motivations for reactions in a race and to consider their impact on performance, whether positive or negative.

Nonetheless I still felt the sting of humiliation and my stomach still sank every time I got dropped and unpinned my numbers.

Windsor was always ready to reshape it. To help me understand I had achieved something, that it had been important.

My next race of the year was the Tour of Perth. I got sick halfway through and pulled out of the last stage. This was the first stage race I’d ever not completed.

The sickness increased my stress and highlighted my lack of form. I was already on edge, and now I was thrown back into a deep patch of all consuming depression, anxiety, dread and fear.

I was lost. Seriously lost. I sent Windsor an email, explaining that I was not coping. That I didn’t know if I could keep going.

This is part of his reply:

I have actually been waiting for this email – and, to be truthfull, it has taken longer than expected (which is a very good thing for your cycling!). In fact, because it has taken this long I believe it means you can make it back into the race scene. But you do need to make some changes.

In Training Phase terms, you have to move from the “just enjoying your riding phase” to “get some routine into your cycling phase” – the other alternative is to retire again. This is a decision you should investigate and formally decide-on.

We will chat soon. 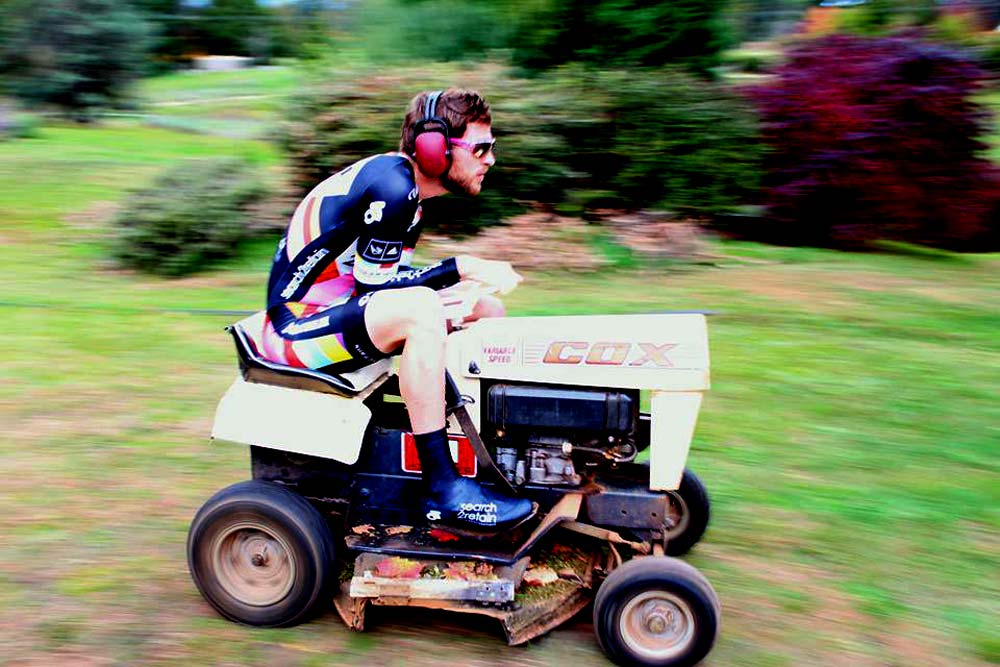 It’s not always about the bike…

Once returning home, it took me some weeks/months to return to club racing in Bathurst and to visit Windsor to discuss his email further.

Essentially, he reasoned, if I could show up to races and get flogged for over a year without quitting, then I could learn to race despite my mental illness.

He told me that no matter what I thought or felt – I was a cyclist. I am a cyclist.

”Your Dad has been a cyclist his whole life. You are also a cyclist. You need to stop questioning if you belong and just do it because it’s what you do,” he said.

“It doesn’t matter if you race or not, you’re still a cyclist, it’s in your blood.”

He told me that if I wanted to have any shot at making it back into the race scene, I had to commit to a three-month program.

The program would mean I must train every day at the same time. It didn’t matter if it felt right or not.

“We both know you are going to feel like shit and hate every minute of it. You don’t do it for any other reason than its just who you are, it’s just what you do,” he said.

He went on to tell me that If I committed to the program, I had to complete it – no matter what! At the end of the three months I was allowed to choose to quit racing. But not until the end.

I listened as he explained to me what the first few weeks of the program would be.

Then he turned his attention to my other option, to “retire” again. However, this didn’t mean walk away from the bike completely again.

We had established that cycling was not the cause of my underlying mental health issues. That it was part of who I was. However, that didn’t mean I had to keep going to elite races.

If I left the team I’d have to ride to work and come to club races. The races themselves were not important. Windsor stressed that the core focus would be going to the cafe with club members after each race.

I had to learn to accept that, regardless of how good I was, everyone in the club viewed me as a cyclist and wanted me in their community.

I left still tormented. I wanted to give the program a try, but I was petrified of locking myself into three months. Petrified of the knowledge that I’d head out each day dreading every pedal stroke.

Still, I found myself “testing out” the first two weeks of the program. I told myself I wasn’t really starting it. You know – I was just seeing what it might be like.

I was in a bad way. My world was so heavy and so dark. I wanted to cry my way through every day… but the tears wouldn’t fall.

Two weeks later I went to another club race, I flirted on the verge of total panic all the way there, all through the race and all the way to the Windsor’s door.

Sitting on a stool at their kitchen bench, I clutched a mug of tea with both hands. It didn’t stop the shaking. I was rattled with fear. Fear of the moment, of the future – and fear of my mind. With tears wishing to flood the floor I told Windsor I couldn’t do it anymore. That I wanted to be able to. But, I couldn’t. I had to stop.

I didn’t tell him that I’d started the program.

We talked about how I’d stop elite level racing. About how I would have to show up to club races and focus on fostering connections within the local cycling community.

At some point he asked me if I had been able to get out at all for any rides. “Yeah, I did those TT efforts and the 300km,” I replied.

Windsor looked at me, and with a smile said, “Then you’re screwed! You started the program! You have to finish it.”

His attention changed from my leaving the elite racing scene to discussing the program in detail.

The central focus was to be a fortnightly fitness test. Training would be specific to this test.

I had to create the test myself. Guidelines were that It had to be a four-minute all-out effort. It had to be something I’d never done before and that no-one else had done or would do. It had to be impossible for me to gauge my performance against anyone else, even my past self.

The last thing he said to me before I left was, “This has to be treated as a new start. You have to forget that you ever went to the junior worlds or wanted to be a cyclist as a kid – it’s got to be as though this is the first moment you ever thought about giving racing a bike a crack.”

That night I went from retiring for a second time to acknowledging that I’d already made my choice to commit to the program. I felt petrified but knew that if I had quit, I’d have felt just as petrified.

My four-minute test became an effort on an indoor trainer. An old speedo hooked up to it. The dimensions of the wheel set to a random number. It was always completed in the same gear.

Windsor had standardised a pre-test session. I’d complete that and then do the test. Taking note of the “distance” I’d travelled.

Every second was torture.

“Just ride the routine. It doesn’t matter if you like it or not, it’s just what you do – it’s just who you are.”

I’d repeat this to myself on loop.

The program finished with the Grafton to Inverell. I fought with the temptation to pull out for every pedal stroke. Convinced myself that once I got to the finish line I’d never have to race again. I would choose to quit.

Of course, Windsor viewed the whole thing as a huge positive. I’d improved with each test and finished the Grafton, and in a reasonable position.

“Maybe I’ll drag myself out just one more day before I quit.”