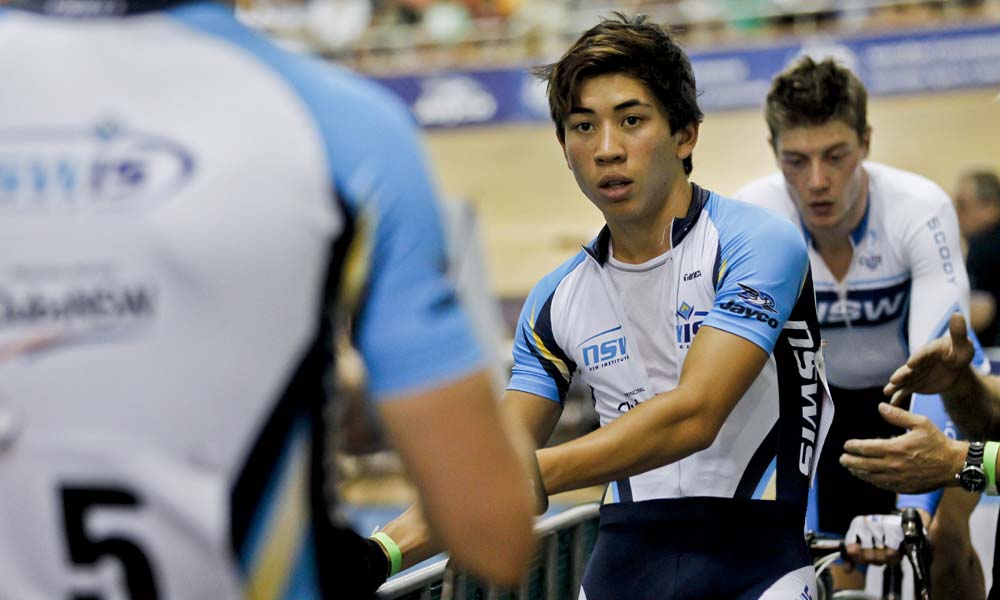 A long time before he stood on the podium as runner-up in Milan-Sanremo, Caleb Ewan was impressing cycling aficionados around the world. We take a flashback to #RIDE55, published in January 2012, when we first featured a story on this promising teenage protégé…

The revelation of the season started his apprenticeship in Europe as a 17-year-old.

Aussie star made in France

Caleb Ewan isn’t just another Australian talent who bagged a track world title as a junior. Like the pioneers of last century, he packed his bags to experience traditional French racing at the age of 17. No wonder he returned to Australia strong enough to beat the local top professionals on two occasions at the Jayco Bay Crits.

“I had the best experience of my life living in France for those few weeks,” said Caleb Ewan in an email on 24 October 2011, after returning home to Moss Vale, NSW, only a week after attending the launch of the Tour de France in Paris.

He had seen his idols and approached them, with the help of a media invitation, on stage after the route was made public.

On top of his list of favourite riders these days is Cadel Evans; meeting him was a thrill for the 17-year-old. But, as enjoyable as it was for a teenage cycling fan, that wasn’t the purpose of his visit to the country where the biggest bike race in the world is held in July. The young Ewan wants to become a pro.

As an Australian cyclist in Paris, he was given a tour of the famous landmarks. Of course he was shown the final circuit of the Tour de France. As he passed the site of Mark Cavendish’s favourite finish, on the Champs-Elysées up from the Place de la Concorde, he vowed: “I’ll win here one day.”

After a six week stint in France, he had time to realise how hard it is to compete on the continent where cycling has more than 100 years of history. Initially, his trip was simply to have a taste of what traditional racing is like in Europe.

He acted on a suggestion by Saxo Bank directeur sportif Bradley McGee. Although Ewan’s dad used to race bikes in Bundaberg, it was the former pro who provided the inspiration to take up cycling. McGee’s win in the prologue of the centenary Tour in 2003 left a big impression on a boy who turned 11 the following week.

It had been a shock for McGee when he left Australia – and his friends, family and future wife – so that he could race a bike on the road with the Française des Jeux team in 1997. He had already become a star in his home country for his achievements on the velodrome. McGee was a junior world record holder for individual pursuit, world champion for team pursuit at the age of 19, and bronze medallist for individual pursuit at the Atlanta Olympics… but his reputation meant nothing when he was thrown into the deep end of the peloton in Europe.

McGee turned pro at 21. He wasn’t prepared for the culture shock. “The way of racing, the food, the weather, the people’s mentality…” there was a list of big differences. The Sydney-sider experienced another world. But, 15 years later, the lessons he learned were passed on to the boy next door. 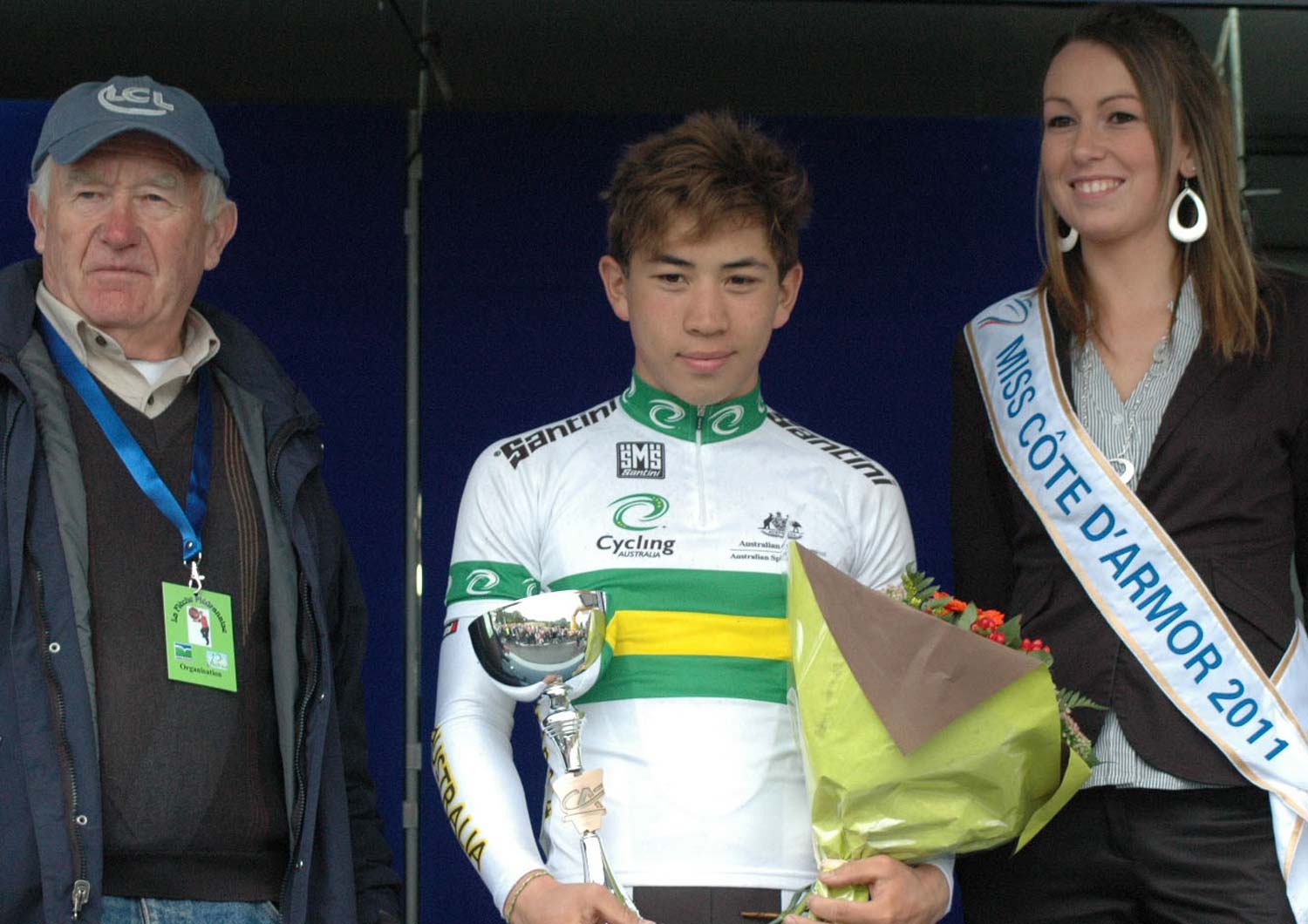 He made the podium in France at the end of 2011 (above) and he started the season with two fine wins in Victoria (below).

The self-proclaimed “Westie” from Blacktown has moved to the NSW Southern Highlands and when he’s not working for the Saxo Bank team he, his brothers Craig and Rodney, and wife Sharni run McGee Cycling Store in Bowral. And this is the town that the young Ewan has called home.

Impressed by the talents he saw, McGee believed Ewan’s development could be expedited if he was exposed to racing in France as soon as possible. “It’s never too early to learn.”

The days of Allan Peiper going to try his luck in Belgium in horrendous conditions at the age of 17 are, thankfully, long gone. But cycling remains a sport in which success comes from being able to face difficulties.

By the time he arrived in France – after being cleared to take part in any race open to juniors as a member of the Southern Highlands Cycle Club – Ewan had become junior world champion for the omnium in Moscow and the junior Commonwealth champion for road race on the Isle of Man.

“My weak point is probably the individual time trial,” he said upon arrival in Nantes. As an immediate consequence of his self-description, his first race would be a time trial. That’s the European way of breeding cyclists.

When he arrived in a small village near Tours to ride the Chrono de Tauxigny, he realised the impact of being a world champion. He wasn’t unknown. His name was in the paper La Nouvelle Republique as the big attraction of the event. The race organiser had been informed by Tour de France most aggressive rider and local star Jérémy Roy of who the young Australian was. Fans were looking for him to get his picture and his autograph.

“The fans! That’s what amazed me the most,” Ewan noted. He clocked the third best time in the junior category. 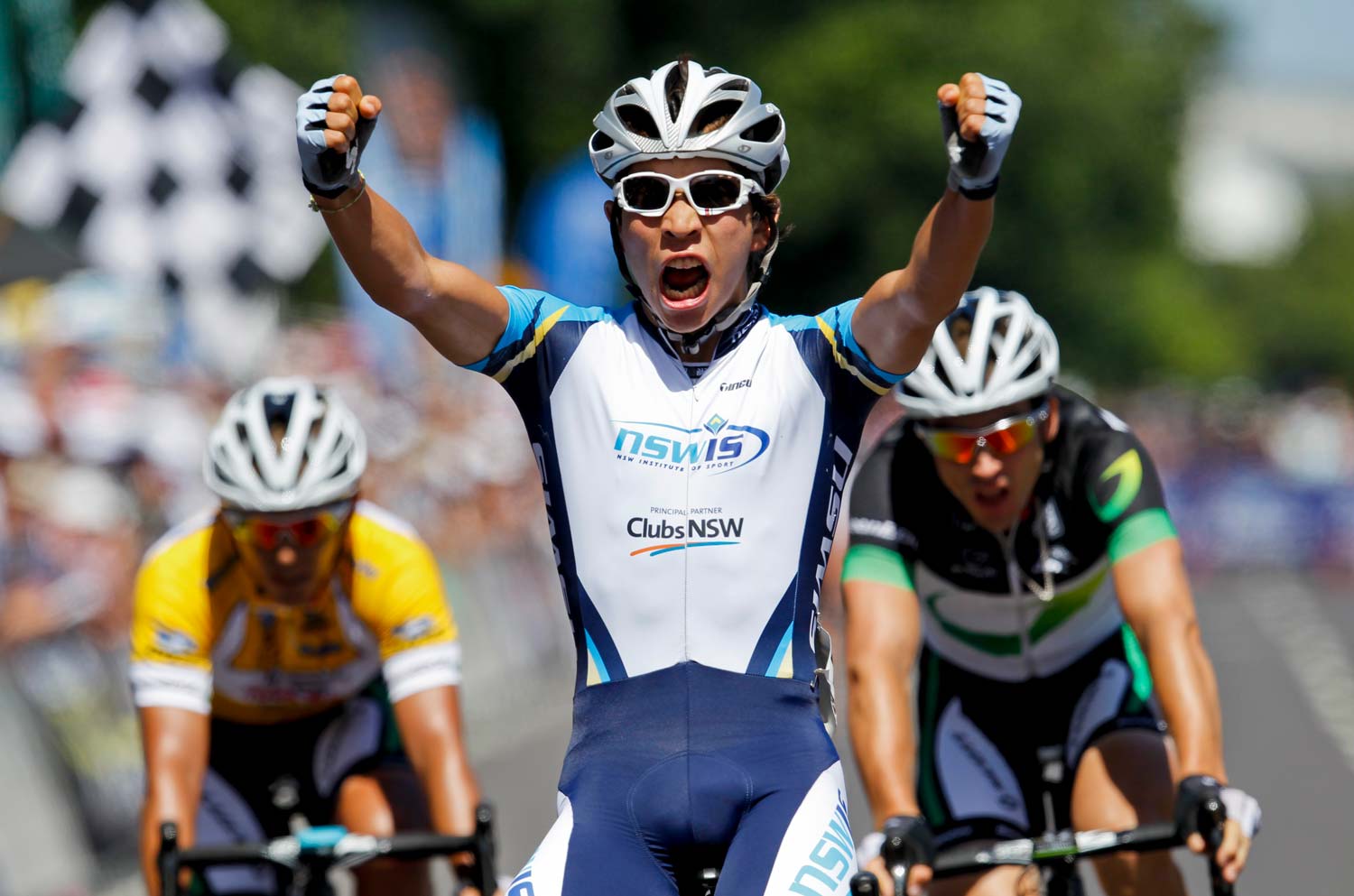 Ewan was beating veteran professionals at the age of 17…

A day later, he got another taste of the meaning of being “world champion” and popularity of cycling in the region. He caught up at the start of the Flèche Pledranaise with the road race junior world champion at the time, Olivier Le Gac.

“All his cycling clothes and equipment are customised with rainbow stripes, that’s so cool!” Caleb gushed.

Le Gac knew a few days before the race that another world champion would be there. The race speaker loudly informed anyone about the phenomenon from Australia and the duel between the two world champions. They both made the decisive breakaway during the initial big loop.

Le Gac got bothered at some stage because the little Aussie was riding hard at the front. ‘How far could he go like that?’ the Breton wondered.

Ewan spent a lot of energy and ran out of gas for the final small laps in front of the huge crowd that had turned up to watch these youngsters. Thousands of people were alongside the road in a Tour de France atmosphere.

“We’d never see that in a junior race in Australia,” Ewan noted.

The popular success of junior races in Brittany last year had something to do with Le Gac wearing the rainbow jersey. His experience made a difference when he attacked solo with 25km to go. He added some teamwork to his individual talent and his mate Geoffrey Millour came second. Ewan was eighth and awarded best of the first-year juniors.

After that race, Ewan decided that road racing was more appealing to him than the track. But the Flèche Pledranaise in mid-September was the last international one-day race for juniors in France for the season.

He saw enough to understand why the French dominated that category on a worldwide scale. It was no real surprise to him to see ‘les bleus’ running the show at the world championship in Copenhagen.

He watched the race on TV (as Australia separates road and track programs, and thus he wasn’t entitled to be selected for road worlds). Le Gac was a marked man and and this worked in favour of Pierre-Henri Lecuisinier who took the win. Junior racing can actually be a team sport as well, which was an eye opener for Caleb.

McGee wanted him to be a fast learner. It worked! 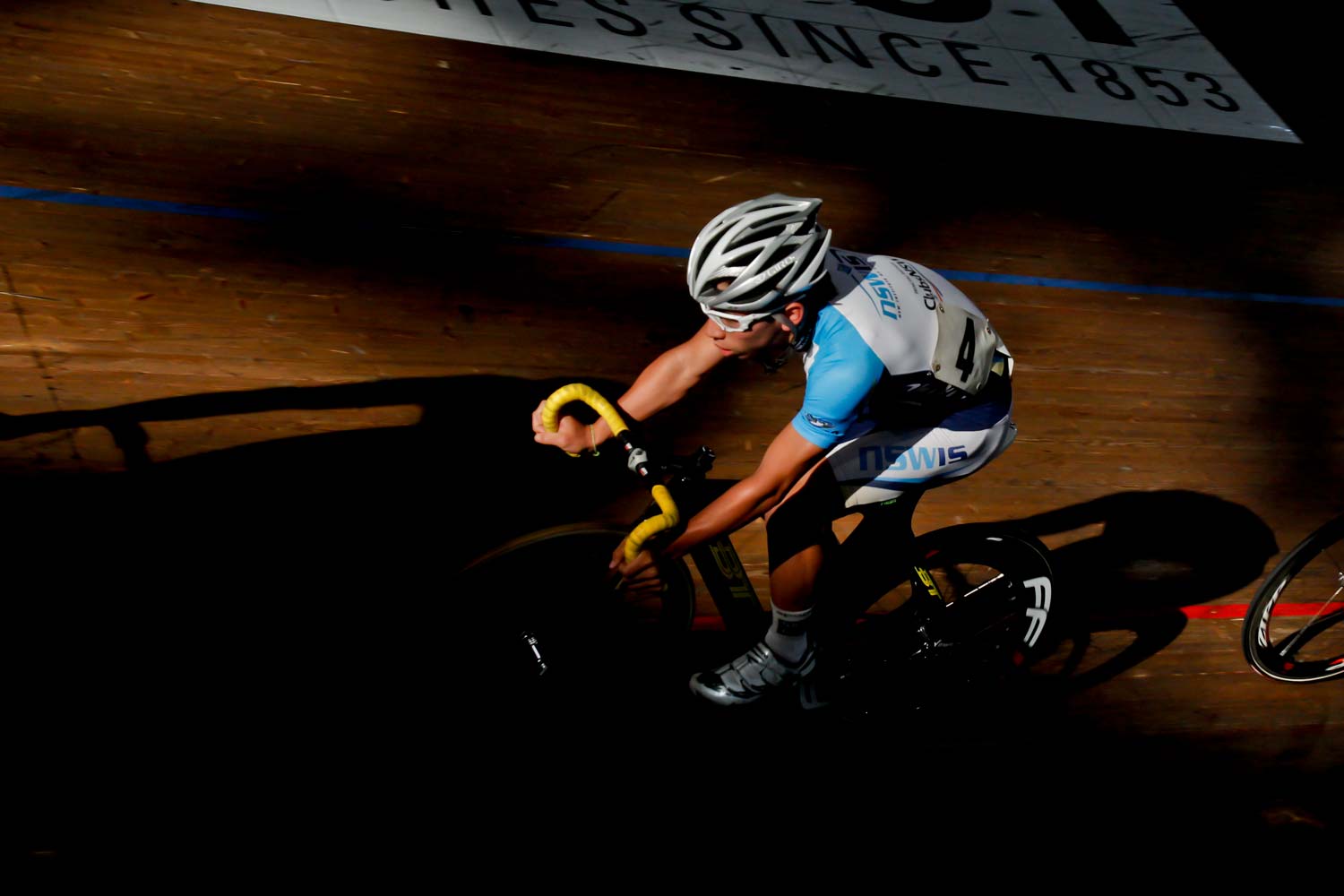 This profile serves as an introduction to a rider who has the ability and approach to become one of our finest cycling exports.

When both met again in Australia during the summer, McGee asked how much French he’d learned. Ewan answered: “J’ai gagné la course.” I’ve won the race.

“That’s what it’s all about,” McGee happily replied.

Ewan effectively won a race in Brittany. It was a hard one with a big climb in the village of Arzano near Lorient. The next day, some fans turned up at another race to see him challenging the elite riders. He missed the decisive break but showed that he was competitive at that level as well. He felt a lot of affection from the people.

He naturally attracted more sympathy for coming from Down Under and being shorter than most others of his age. He laughs and jokes, “I know, I look 14…”

Before being courted by several different directeurs sportif of professional teams in January, the young Ewan got to meet FDJ’s team manager Marc Madiot. The man who gave McGee his first go as a roadie also lent a time trial bike to McGee’s protégé – the one Christophe Le Mevel used when he finished 10th in the 2009 Tour de France. The pick-up was organised at Madiot’s little home town of Renazé where Caleb could see the posters on the walls of his victories at Paris-Roubaix (1984 and 1991).

The 17-year-old was becoming aware of the importance of history in the way cycling is run nowadays. 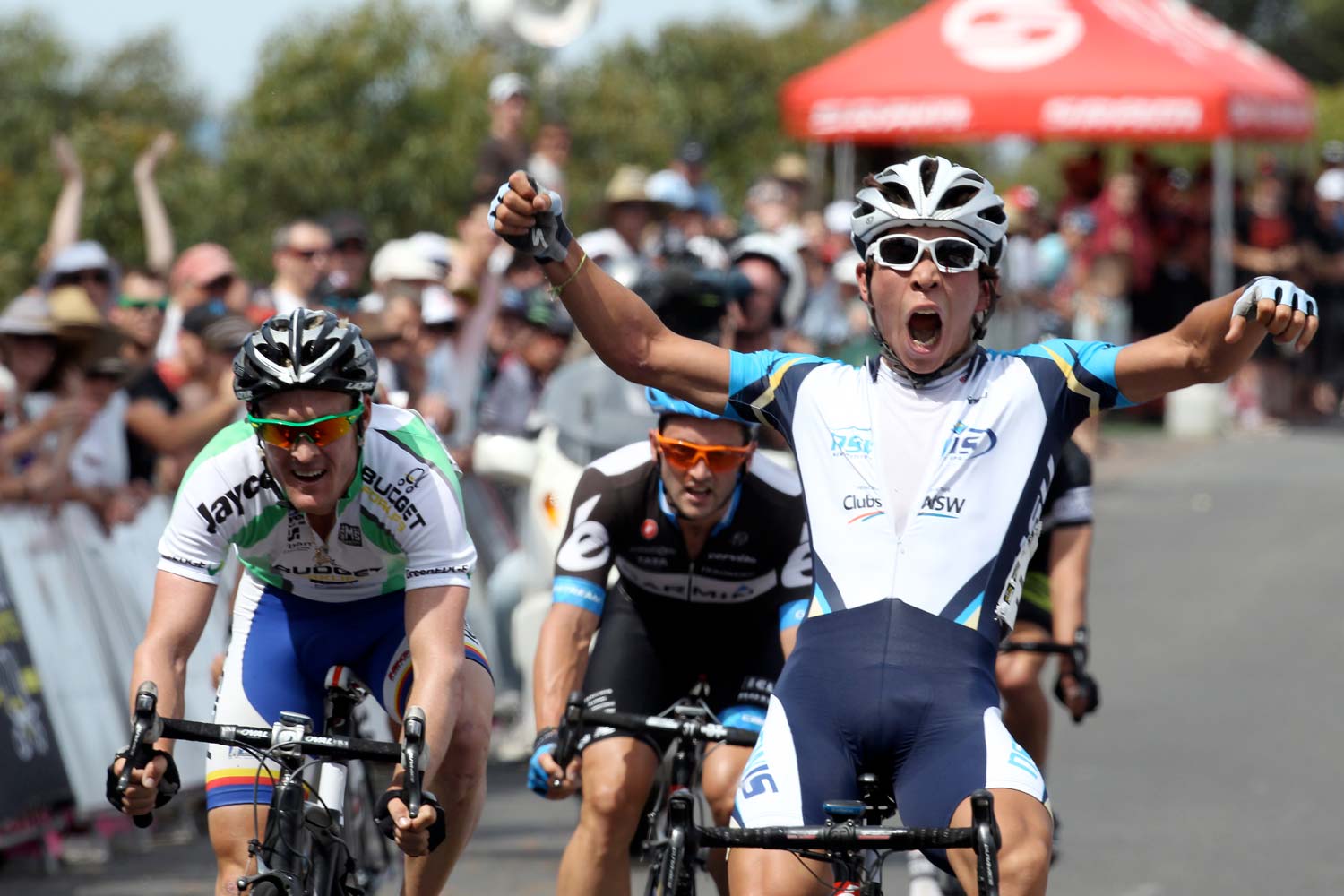 Six years after this profile was originally published, Ewan has indeed become a seasoned professional.

He was invited for lunch at the house of the organiser of the Chrono des Nations, Christian Tessier, who puts together the final event of the season in Europe.

Caleb got to see inside a race organisation: the search for sponsors, the gathering of the volunteers, having to deal with the stars to attract the fans… On the D-Day, after racing in the junior category and getting a 12th place – far from what he hoped and prepared for – he was in a campervan for foreign riders when Alexandre Vinokourov and the elite winner Tony Martin stepped in and greeted him. In silence, he witnessed the preparation of these renowned pros.

Later he signed autographs on pictures of him taken by fans at previous races. There was a big crowd that day in Les Herbiers, where stage one of the 2011 Tour de France finished.

“Besides my result, which was not good, I’m impressed with what I’ve seen. I love the hype of the time trial,” he said.

Over the next few years, he’s bound to understand exactly what discipline he’s best at. For now, it’s difficult to categorise him but versatility is one of his strengths or else he wouldn’t be the world champion in the omnium. That’s a track race, but it involves a variety of elements.

He may not like doing time trials but he now understands the appeal.

He can sprint – and beat some of the best elite riders doing so. And the young man says that his real strength is climbing. The future is bright…

In a short period, Ewan saw a lot of what European cycling is about. He has learned a lot and added something to his track background that’s helpful for a rider who is keen to accelerate his development as a roadie. He impressed at the Jayco Bay Crits where his two victories out of four races also might have sped up his cycling career but he had concluded his email last October by saying “au revoir”. He wants to see Europe again and he surely will.

Fans will have more pictures for him to sign. It’s their record of history.