Australian cycling has a genuine superstar in Jai Hindley, the 24-year-old from Perth who is now the leader of the Giro d’Italia with just one time trial stage to go. He’s a climbing phenomenon, as is his British rival Tao Geoghehan Hart, the winner of stage 20. Meanwhile, in the three time trials they have raced against each other in 2020, the Brit has beaten the Aussie twice…* 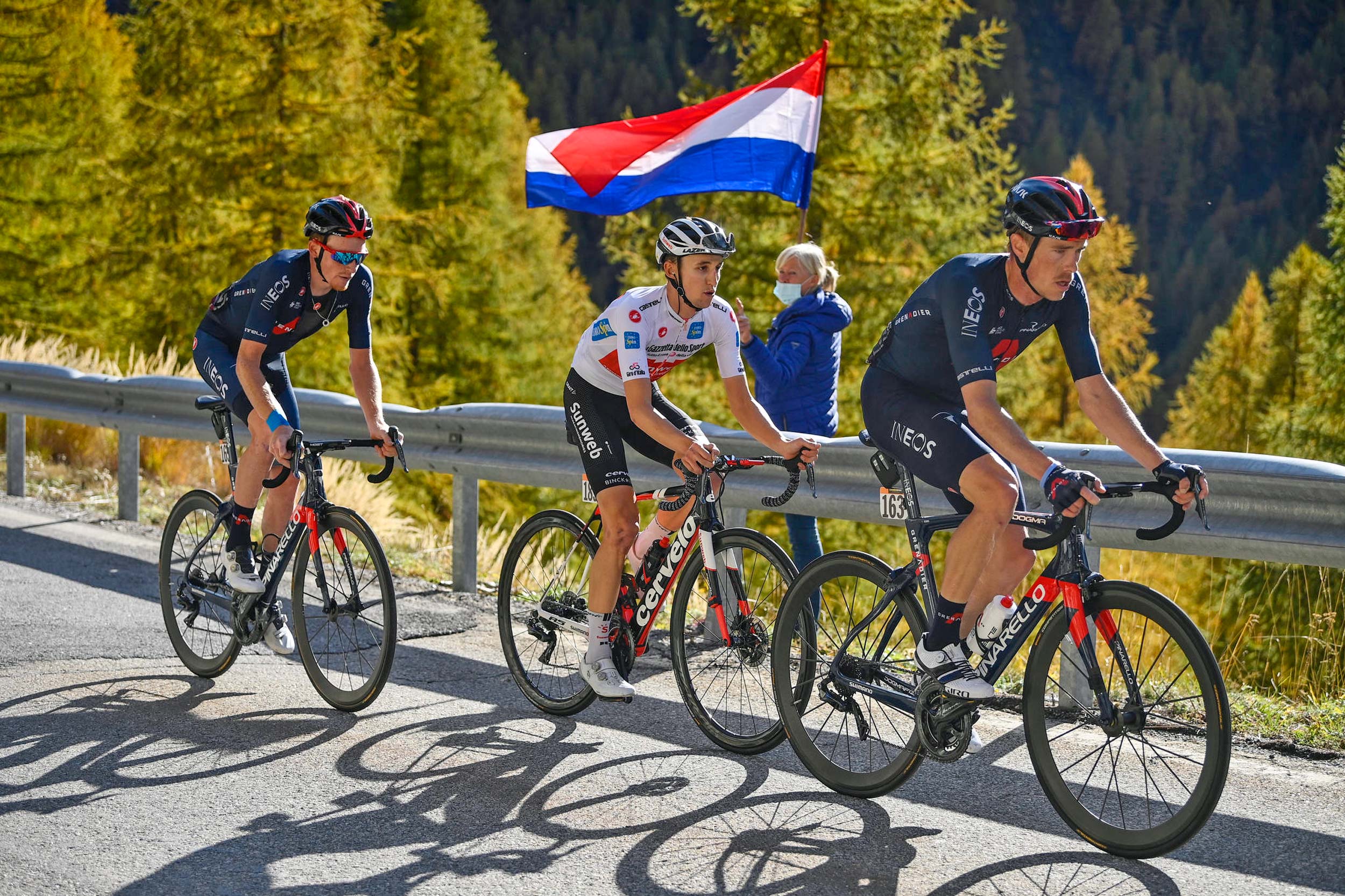 Rohan Dennis may have finished third in stage 20 but, once again, the work he did for his team leader Tao Geoghegan Hart made him the star of a stage at this year’s Giro d’Italia. (Photos: La Presse by RCS)

At the moment Jai Hindley became the virtual leader of the 2020 Giro d’Italia, his compatriot Rohan Dennis was setting a furious pace, enough to distance Hindley’s race-leading team-mate Wilco Kelderman. This happened with 30km to go in the 20th stage, on a day when the peloton faced laps in the Alps, up to the ski station of Sestrière, down into the valley and up again… and again.

It was a battle royale between two teams, Team Sunweb and Ineos Grenadiers. And although we celebrate the status of Hindley after 85 hours 22 minutes and seven seconds of racing – clad in the pink jersey for the first time, Race Leader – it’s the final 15.7km of what has been an intriguing Giro that may be the Aussie’s downfall and the Brit’s moment to deliver victory. 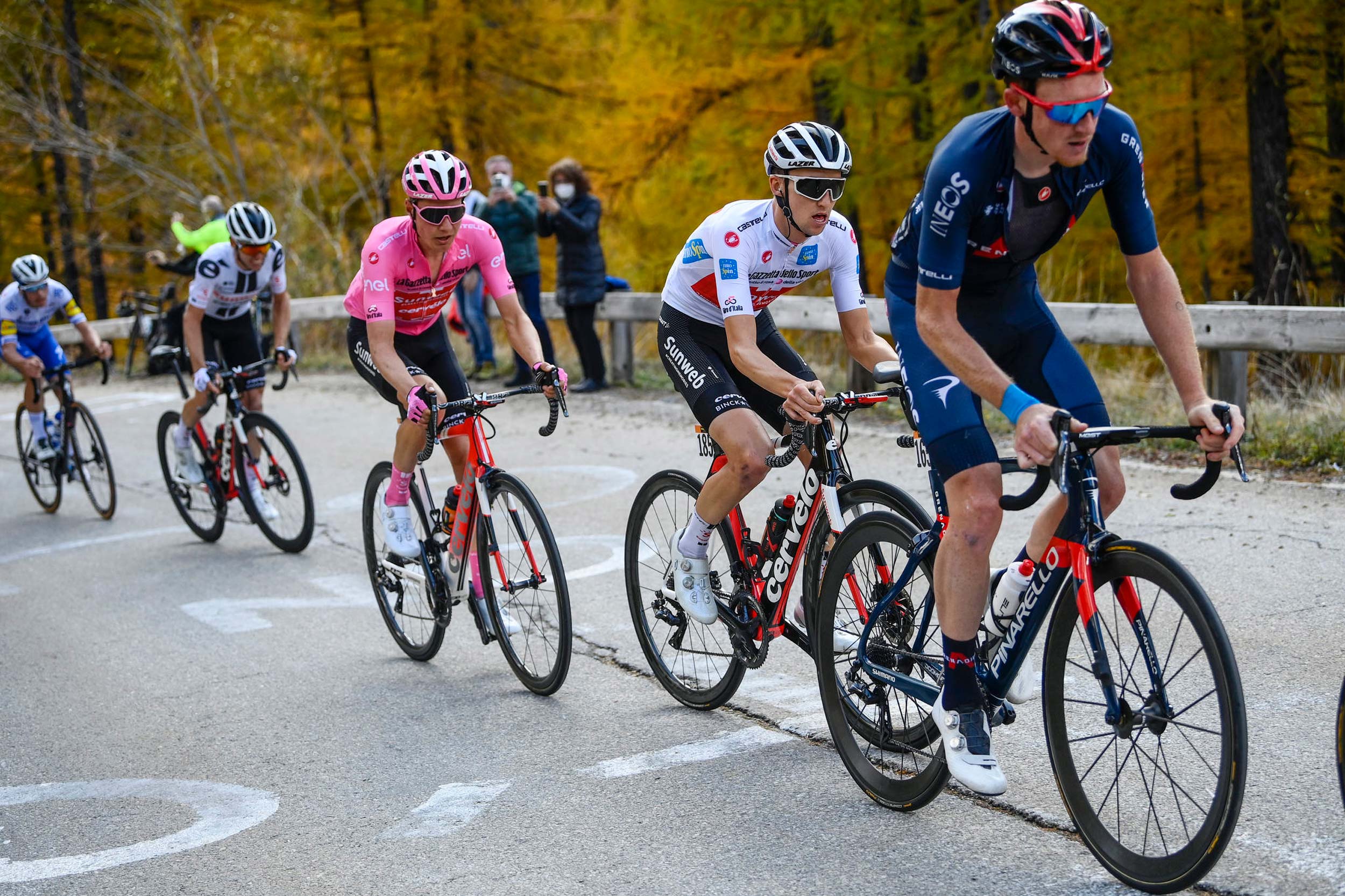 Kelderman, in the pink jersey for the second successive day, was able to match the pace set by the Grenadiers… until the surge by Rohan Dennis came with 30km to race in stage 20.

Team Sunweb seemed to hold the aces going into the 20th stage, with Kelderman in pink and poised to become the team’s second Giro champion in four years, but then Rohan Dennis came to the front of the elite selection that included the Dutch race leader. And that’s when the intriguing contest became even more compelling.

The Grenadiers had the strength of numbers on the approach to Sestrière. Filippo Ganna, a winner of three stages in this year’s race (with another likely to come in Milan from the TT wizard), sat at the front tapping tempo and ensuring the anticipated showdown on the closing climbs of the 103rd edition would unfold.

And what a showdown it became!

This was a tactical contest that forced Hindley into a dilemma. What should he do if Kelderman cracked again, as he did on the stage over the Passo dello Stelvio two days earlier? Should he wait and nurse his more senior team-mate to the line or go for glory himself?

Ultimately it was the pace of Dennis and the capitulation of Kelderman that made that decision a little easier.

What has become clear is that Australian cycling has two of the most dominant riders in the peloton that remains with just 15.7km to go. Hindley is the race leader and Dennis demonstrated what strength and persistence he has. 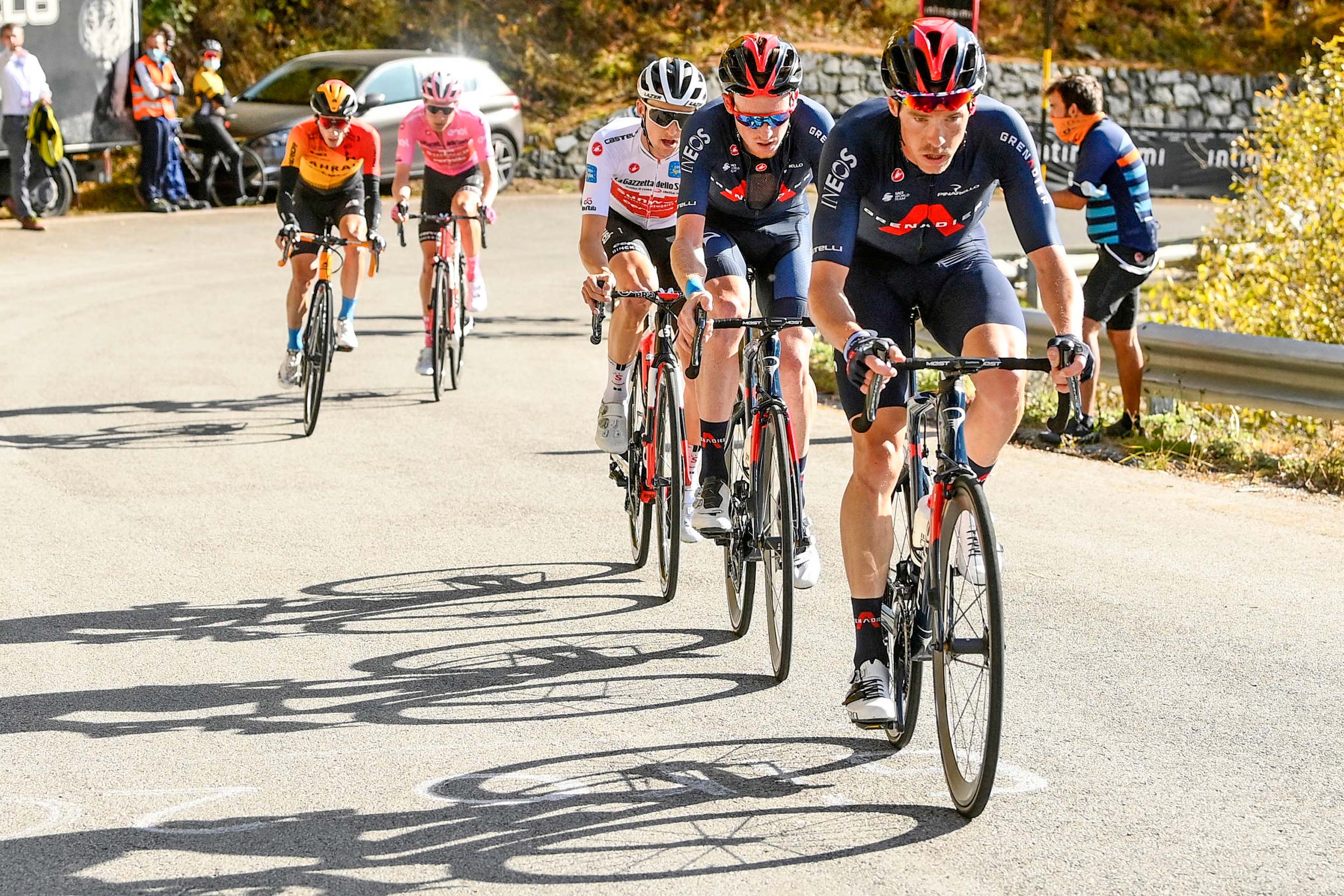 This was the moment when Jai Hindley switched from being Team Sunweb’s ‘shadow leader’ to leader. Kelderman lost contact when Dennis turned on the gas…

On the approach to the first ascent to Sestrière, Rohan Dennis waited patiently behind Ganna, itching to do his job and knowing that he had the kind of form that could ruin Dutch dreams. Kelderman was there, there, and still there… But then, Ganna peeled off. Job done.

Kelderman still had support. There was a smattering of Sunweb riders in a sizeable selection, but that group would soon be whittled down in dramatic style because of Dennis’ stunning turn of pace.

With Ganna, the Italian TT world champion riding to the finish in recovery mode thinking of what’s to come in the final stage, we saw another Grenadier, Jonathan Castroviejo, set the tempo for all of a few hundred metres. Once his turn was complete it was time for Dennis to unleash his power.

The numbers generated by the two-time world champion will put you in awe. He’s a freak of a rider and, if he hadn’t had a job to do for Geoghehan Hart, it seemed a forgone conclusion that he’d have won the stage himself. So strong, so controlled, so calm.

Just as it was a few days ago, Dennis forced the pace to such an extent that only the two best climbers in the race – Hindley and Geoghehan Hart – could match him.

Onwards he pushed and, as he put more and more time into Kelderman, the tactical quandary that Hindley originally faced was also crushed. For a while – as it was over the Stelvio in stage 18 – it seemed plausible that the Dutchman from Team Sunweb might be able to limit his losses.

Initially it was relatively minor: 10 seconds, 20, 30… but by the day’s end, it was 1:35 for Kelderman and he dropped from first on GC with an advantage of 12 seconds down to third, 1:32 behind the new race leader. 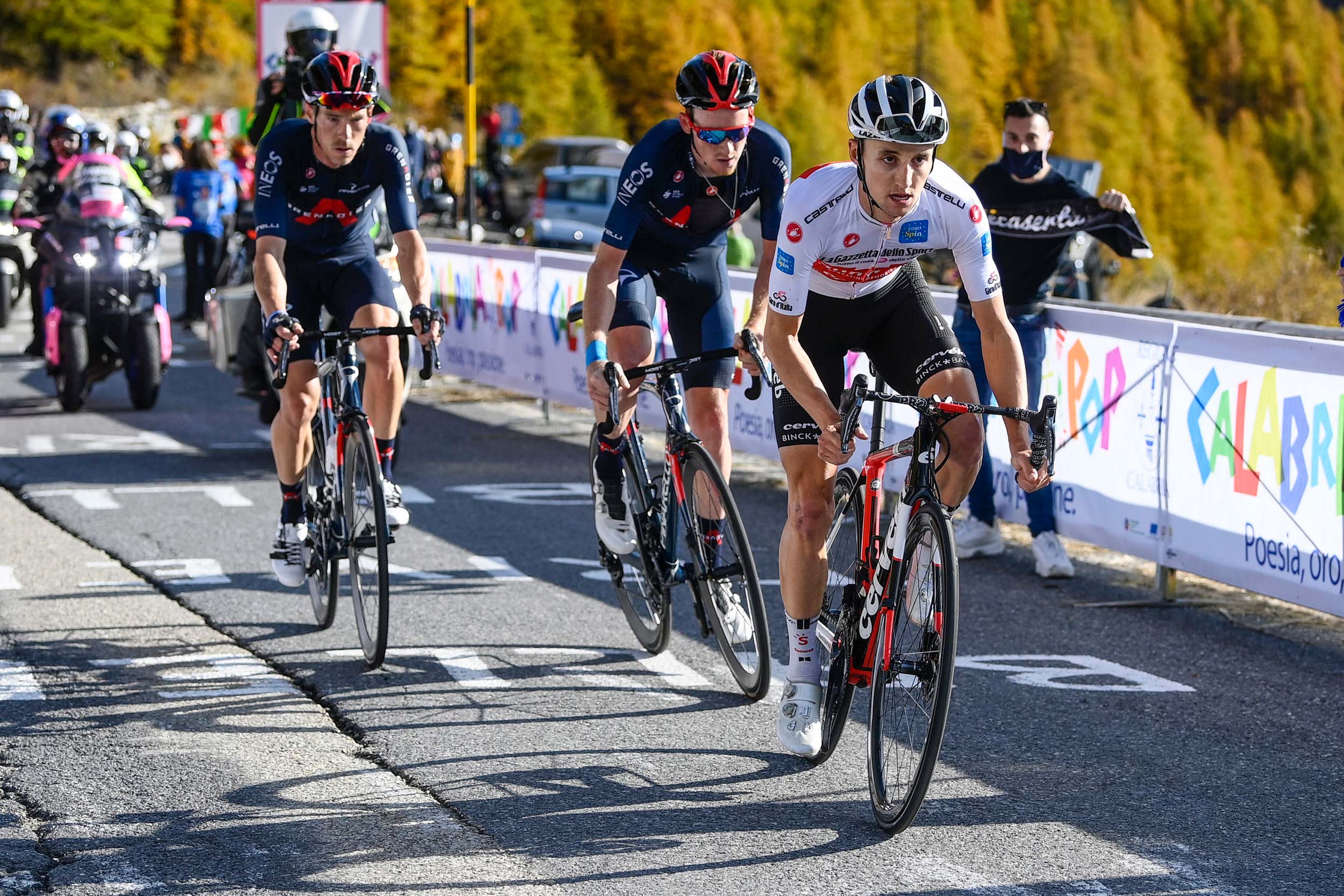 Hindley really wanted to put time into Geoghegan Hart in the final ascent of the 2020 Giro but, try as he did, it wasn’t possible.

At the start of the stage, talk was about Kelderman’s capabilities and the likelihood of him holding onto pink.

Ordinarily, he should have been capable of matching the tempo and pacing his way to the finish line at Sestrière with the other GC hitters. But, as we’ve come to learn in 2020, nothing is ordinary.

After what he’s done these last three weeks, it’s obvious that Hindley is indeed one of The New Generation of GC racers. He is a climbing machine, a 60kg package of sinew and muscle who pedals with such grace on steep gradients that you think it’s flat while watching from the couch.

For all his ability, however, it doesn’t seem likely that he’ll be able to stand on the top step of the podium tomorrow. He’s a star in the mountains but – alas, for Aussie fans – the 15.7km against the clock isn’t going to serve him well.

If there was a little more of a time buffer, we could speak differently about Hindley’s chances but after 20 stages, his advantage over Geoghehan Hart, now second on GC, is just a fraction of a second!

Yes, after over 85 hours of racing in the Giro of 2020, the two riders at the top of the overall rankings are effectively on the same time! Only 0.86 of a second separates the pair.

Geoghehan Hart had the benefit of having Dennis there for support. Hindley, meanwhile, had only the gradient as his friend on the final ascent to Sestrière and, unfortunately for him, it wasn’t enough.

Try as he did to crack the Grenadiers, he couldn’t put any distance into his British rival. He knew he had to dance. He knew that, to win the title, he needed to put considerable distance into Geoghehan Hart. And he tried his best, but each time the Grenadier clung to his wheel.

The first big-ring surge from Hindley eventually came, with just three kilometres to go. But the Italian flags of fans on the roadside told the story: it was windy up there and any time in the front would be costly.

His surge was formidable, amazing even… but it wasn’t enough. Geoghehan Hart held the wheel and Hindley was left stranded, pushing into the wind up the steep road.

He settled, gained his composure and somehow rested his legs enough so that he could try again. In the final few kilometres he attacked several times but the outcome was always the same: surge, check on the damage, and recognise that dropping the Brit was going to be impossible.

Tellingly, in the final kilometre there were several hundred metres when Hindley and Geoghehan Hart rode side by side, both at their limit, both considering the maglia rosa, both knowing they could win the stage… and the title of the 103rd Giro!

Eventually logic took hold and Geoghehan Hart settled and dropped back so that he could follow Hindley, shelter from the wind and mark his rival. That’s when it became clear that although Jai was going to take the pink jersey on Saturday afternoon, Tao was going to win the stage.

That’s what happened but there was little distance between them in the stage, and in the GC standings.

The final time trial is sure to be a thrilling one. History tells us that Geoghehan Hart is the stronger of the pair in this discipline and that would suggest that he’s most likely going to give the Grenadiers a Grand Tour win in 2020. But Hindley will have the benefit of time checks and the fact that although it’s a TT, it’s not a long one.

He’s going to race the time trial of his life on his first day in the pink jersey but there won’t be tactical decisions to make in Milan. It will be a simple demand from his team: go as fast as you bloody well can Jai!

A day remains before we know the winner but it’s been a thrilling final week and one that will be remembered by Australian and British cycling fans for a long time to come… Dutch fans, meanwhile, will be quietly talking about other things, like how great it is that Kelderman scored a spot on the Giro podium of 2020. It is indeed a fine accomplishment but it’s not quite how Wilco wanted the race to end.

Excuse me, but the race report was written in haste without thoroughly reviewing the two riders at the top of GC after 20 stages and their efforts against each other in time trials this year.

Both are clearly phenomenal climbers and yet they haven’t often done a time trial at full effort (as, quite frankly, they are usually – surprisingly – doing domestique duties rather than going for GC themselves).

In 2020 they have raced each other in three time trials, all of which have been won by Filippo Ganna. So far this season, Tao holds the advantage beating Jai two out of three times.

Here’s a quick TT comparison of Jai Hindley vs Tao Geoghehan Hart in 2020: