Jai Hindley – 3rd at the Giro d’Italia: “We’ve got a great shot of winning it with Wilco”

There’s an Australian rider in 3rd overall at the 2020 Giro d’Italia. Jai Hindley set a blistering tempo on the final climb of stage 15 and jumped from 10th on GC to a podium spot. We spoke to him about his ambitions, his power that day, how COVID may impact the race and what he expects from the final week… 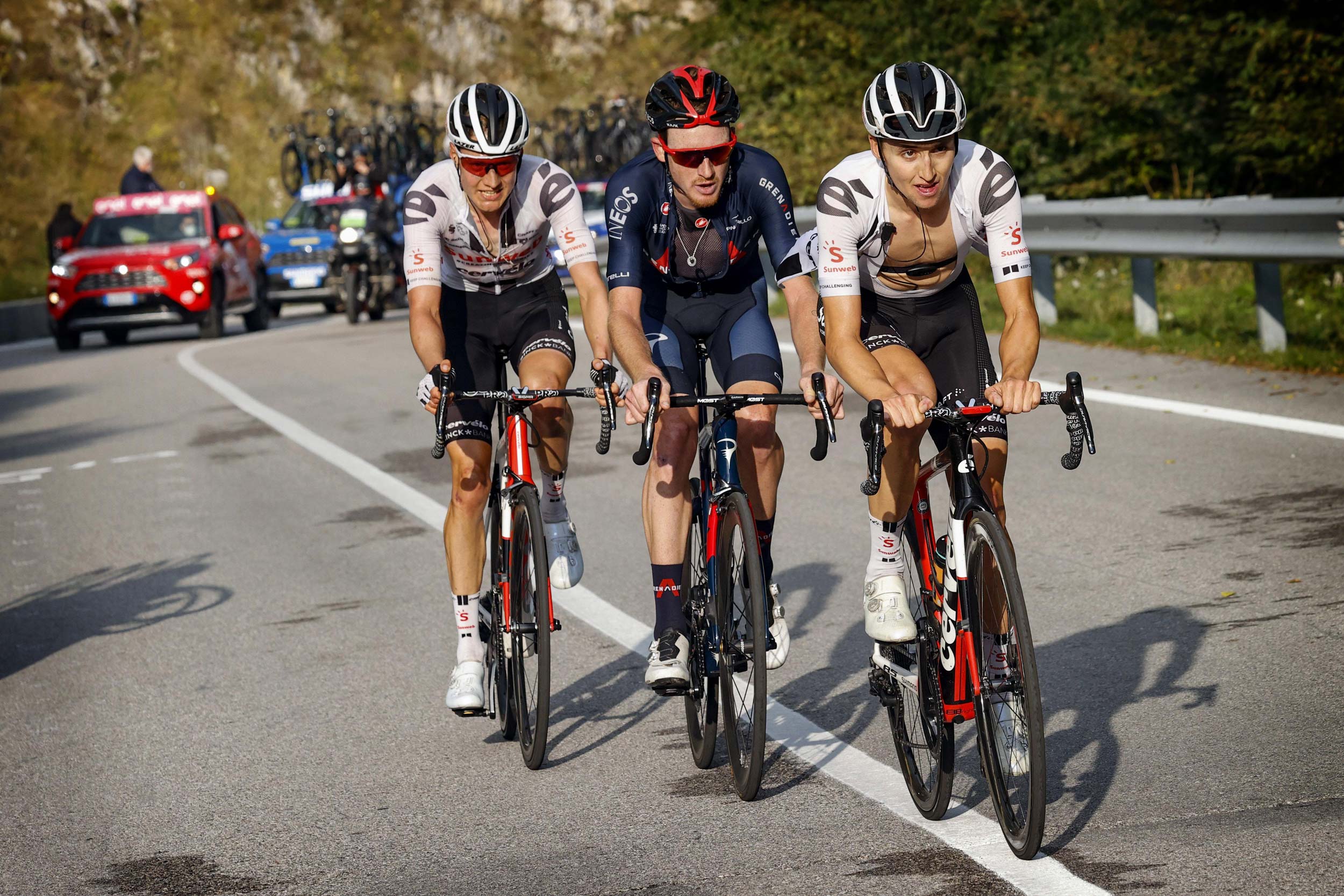 On Sunday 18 October 2020, Jai Hindley emerged at the front of the bunch at crunch time in a crucial stage of the 2020 Giro d’Italia. He raced with such force that only two others could match his pace. The 24-year-old finished third at Piancavallo and he’s now third on GC.

While he ate dinner after the stage, he answered text messages and, when asked to explain his emotions, he replied: “It feels pretty not shabby.” Indeed. He’d just smashed out a personal 20-minute power PB a few hours earlier and his head would have been spinning from the effort.

He agreed to speak on the morning of the rest day and, true professional that he is, once breakfast was finished he was on the phone.

Below is a transcript of an exclusive interview with the latest Australian Grand Tour star, Jai Hindley.

– Click the link below to listen to the interview, and/or read the transcript below. –

RIDE Media: Sounds like you put on quite a show there yesterday, Jai Hindley. You’re third on GC, it looks like you could have won the stage but you had team responsibility. Where do we start?

RIDE Media: I understand. You’d be pretty busy. So, I’ll rip straight into it… I’m talking to you on the laptop and you’re in the Dolomites and sitting in a podium position in the Giro, so tell me Jai Hindley, do you think you can end up on the podium?

Jai Hindley: “Ah, I’m not too sure. I think, realistically it’s going to be pretty hard but I also don’t really like thinking realistically.

“We’ll see. I don’t know. It’d be a dream come true for sure. But… there’s also still a pretty hard week to come, so you just never know in a Grand Tour. But I’ll do my best, man. That’s all I can do.” 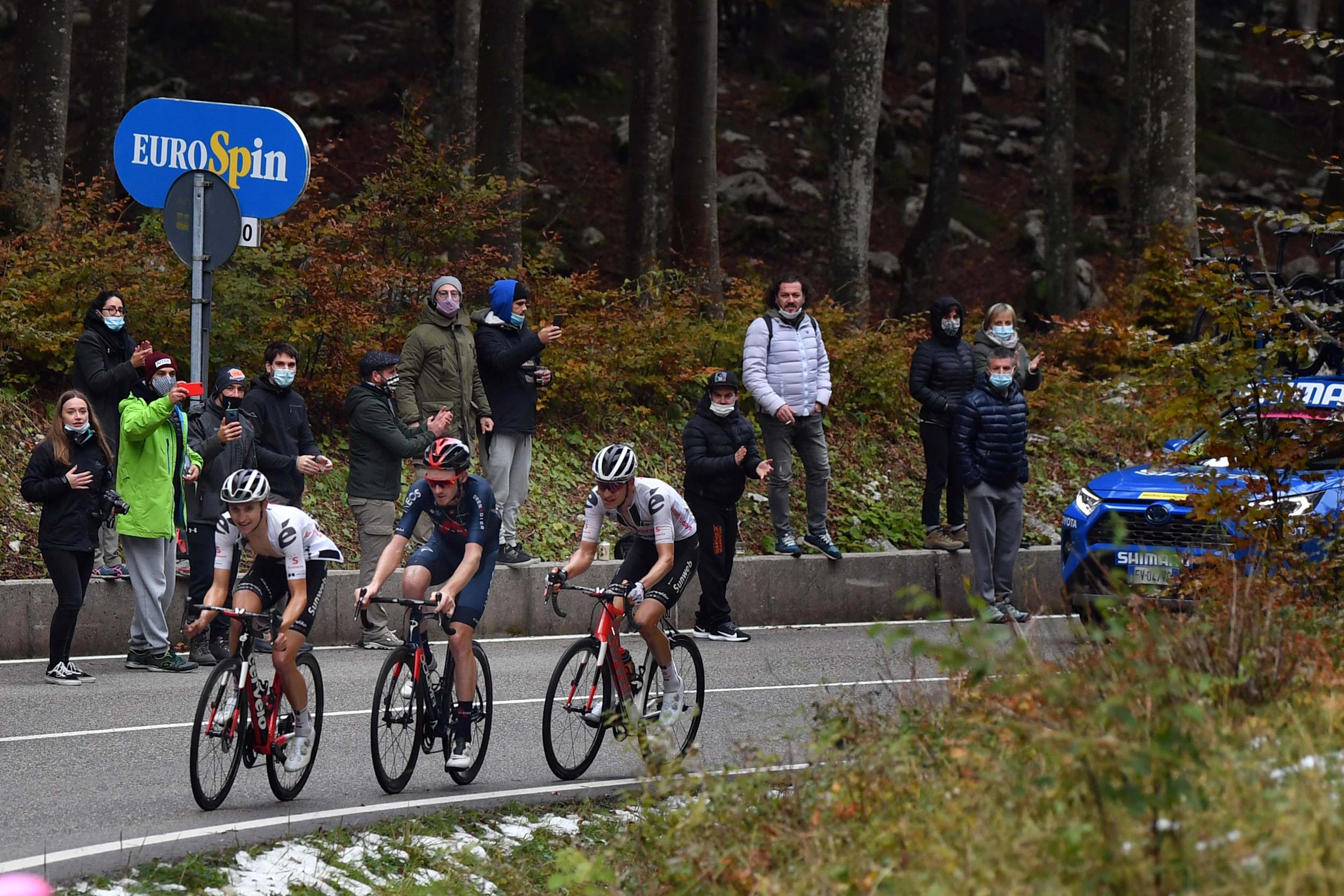 RIDE Media: Obviously the job, first and foremost, is to look after Wilco and then I suppose you just get to play your hand depending on how you feel once you’ve done that chore. Is that a pretty accurate appraisal?

“I came into the race with Wilco as the protected leader and I was sort of like the ‘second protected leader’, you could say. Or the ‘shadow leader’. And it’s pretty much still like that.

“I think we’ve got a great shot of winning it with Wilco, so at the end of the day I’d like to see it with him winning. Like, it’s great to be out there… but I’ll put it on the line for him to win the maglia rosa, you know?”

RIDE Media: I think a lot of people will be interested in this interview because, you and I have known each other a few years and I always thought that you might climb well one day in a big race… you’re doing that now. But let’s go back to the beginning a little – not necessarily all the way – but how would you introduce yourself to people? You’re going to be doing that a fair bit now.

“There’s not much else to it really.

“I don’t know. Just an Aussie bloke. Just another guy who likes to ride his bike, for sure.”

RIDE Media: You climb like you were born on a bike and born to go up mountains. I compared you in a feature today, with Matt Lloyd who has won the King of the Mountains title [at the Giro] before. You’ve also got a laconic nature, like him. But let’s just start with some of the physical basics. What are you weighing in at now, so that people can get a picture of what you’re pushing up the hill?

Jai Hindley: “Yeah, this morning I actually just had skinfolds [taken], and I was 60.3kg…”

RIDE Media: And is that kind of standard for you or have you lost a bit of weight during this Grand Tour?

Jai Hindley: “Nah, actually that’s pretty standard: 60 or 61 is usually what I’d race at. And throughout the year I don’t really fluctuate that much either. I don’t really put on too much and I don’t really go under that, so for me it’s usual.”

RIDE Media: People got good vision of you yesterday because you drove it up the last climb and did an incredible job, on the front most of the time, and you despatched the maglia rosa himself… You must know your numbers because you’ve had a bit of time to consider the ride. What sort of power was that effort?

Jai Hindley: “I’m not sure what I did on the whole climb but I think my best 20 minute was 390 [watts] or something, which is also actually a PB for 20-minute power, which is pretty cool.”

RIDE Media: Is the PB coming from the sheer opportunity that exists or are you just feeling like you’re on top of your form? How much has knowing that you could potentially win the race got to do with what you’re able to do yesterday? I suppose [that’s] the question.

Jai Hindley: “Ah, I don’t know. There’s a few things in the mix there.

“Actually, I think I’ve probably got the best form I’ve ever had. Also, when you’re on the big stage like that and you’ve got people on the side of the road screaming at you and you’ve got the DS in the ear saying that the pink jersey is dropping, you can go like… yeah, it’s pretty big motivation to put some more power on the pedals, I guess.”

RIDE Media: People can relate to it now. Watching bike racing is different in 2020 because a lot of people have spent time on the home trainer so they can relate to that kind of figure – and it does make the mind boggle, especially once you put watts per kilo down. So, well done, first of all. 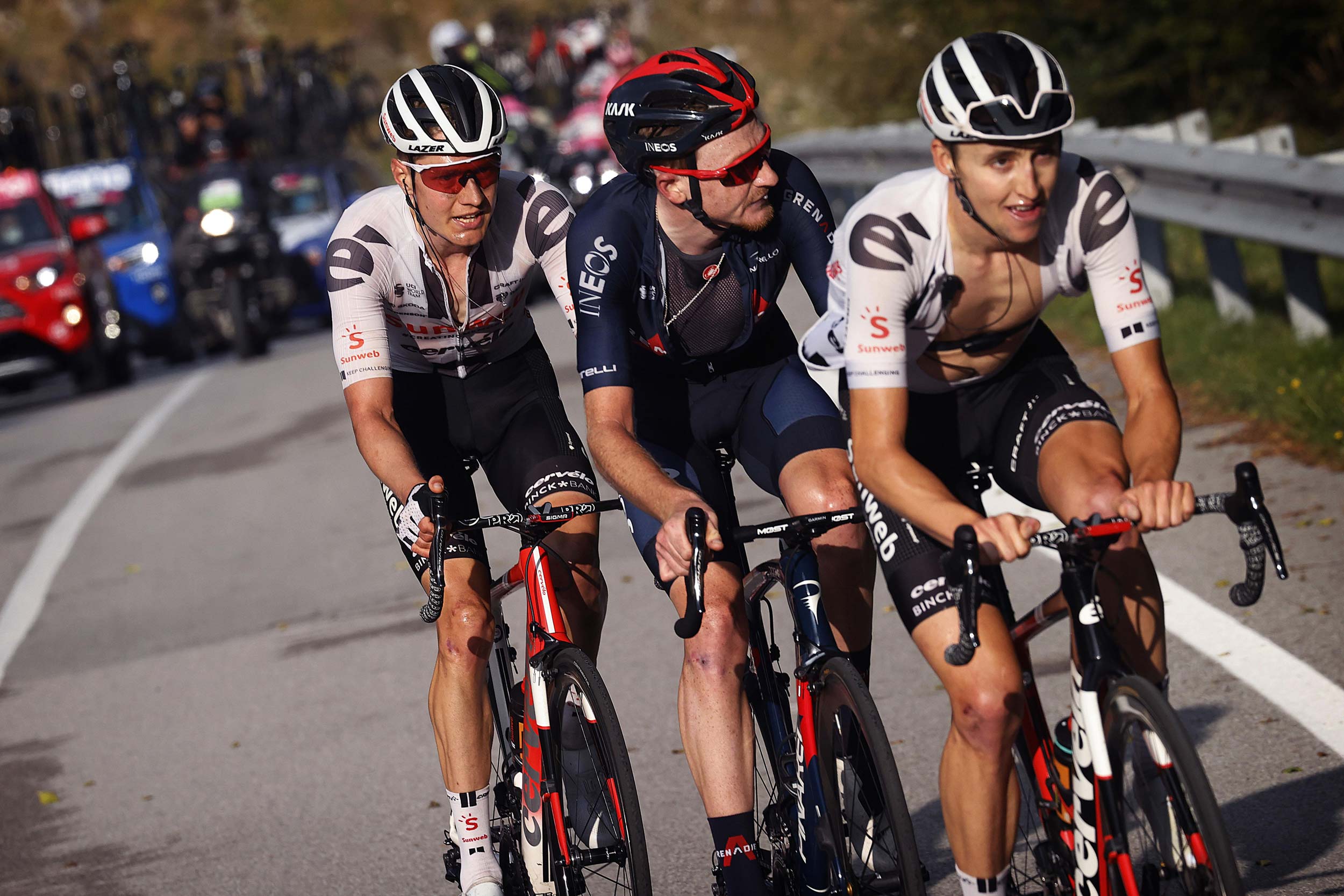 RIDE Media: Obviously, in the COVID era, we have different crowds. You talked about people on the side of the roads. How is the vibe? How is it for you in the bubble?

Jai Hindley: “I would say our team is probably one of the more strict teams in terms of a lot of the protocols and what they’re doing to protect the team here. I really appreciate the effort that the team is doing.

“But I guess you’re always going to have people on the side of the road and that can’t be stopped.

“It’s just a bit annoying when not all of those people are wearing masks and you’re riding past, like, pretty slow on a climb and they’re screaming in your ear with no mask on. You’re like, ‘Oh…’ but it’s also the sport, you know. What makes it so great is the fans and the fans being so close to the action…

“It’s a bit of a double-edged sword, you know? Like, I actually really like it when there’s heaps of fans but at the same time it’s just not the safest at the moment. It’s not the safest time to watch a bike race.” 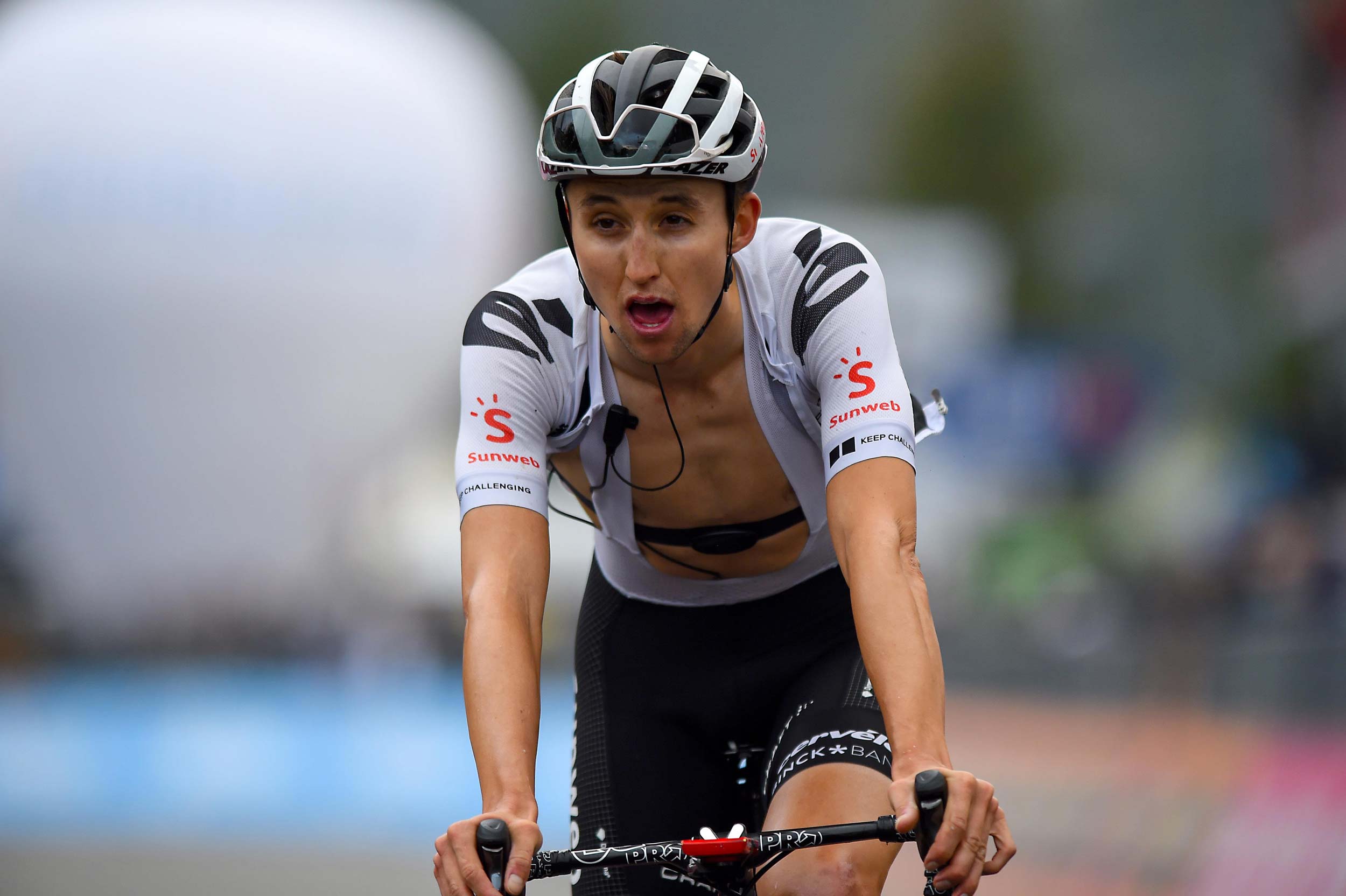 RIDE Media: It’s a totally insane year and it’s actually really pleasant now to be sitting here talking to you about bike racing. I just wonder, [as] you’re in the middle of it, you’re in the thick of it… [and] watching from afar, and reading the news, you get into a panic wondering if the race will reach Milan. What’s your feeling on that…?

Jai Hindley: “Well, I guess today is the big decider.

“I think we’ve got another PCR test but from what I… from my gut feeling, I think, for sure, it’ll finish actually – which is pretty surprising because if you asked me a few months ago if we were actually going to start the Giro, I probably would have said no.

“But fair play to the organisers for making it happen and getting it done but, like I said, today is the big test. If the race can get through this next rest day, after finding out all the results of all the PCR tests, I think if that goes ahead, the race will continue no matter what. Even if there’s snow on the Stelvio or they have to change all the mountain-top days, I still think it’ll happen.”

RIDE Media: We’re closing in on 10 minutes and that’s the allocated time, and I’m going to respect that but let’s just sum up. You said you had a PB yesterday. You’re sitting in fantastic form. Do you think you can hold that form? It is your terrain, really, isn’t it for the next few days?

“It’s a big few days coming up to finish it off. I’d love to be able to ride every day feeling like I did yesterday at the end. But you also don’t know, you know?

“It’s Grand Tour racing so the wheels can fall off at any moment but I’ll just keep going until they do.”