There are few in the peloton who are as well regarded as Allan Peiper. He was a pioneer as a pro rider and, at the age of 59, he’s racing again…

It’s different now. He’s a directeur sportif at UAE Team Emirates but, as this documentary explains, he’s back in the cycling world – which is his life.

– Watch the feature on Allan Peiper from his first stage race since chemotheraphy, click the link below. –

At the end of an interview with Allan Peiper on the eve of the 2019 Tour de France, I switched off the camera and began to cry. Overwhelmed by emotion and fearing that it may be the last time I saw someone who has become a friend since we first met in 1992, it was impossible to hold back the tears.

As a teenager, I followed his racing career from afar via tiny print in the result section of a newspaper and from reports in cycling magazines that weren’t available in Australia until months after he had crossed the finish line.

In the 1980s, it was difficult to get any true perspective of what it was like to be in the pro peloton but Peiper provided an impetus. He was a pioneer in the cycling world when he first went to Europe all those years ago, and 40 years on, he continues that fine tradition. 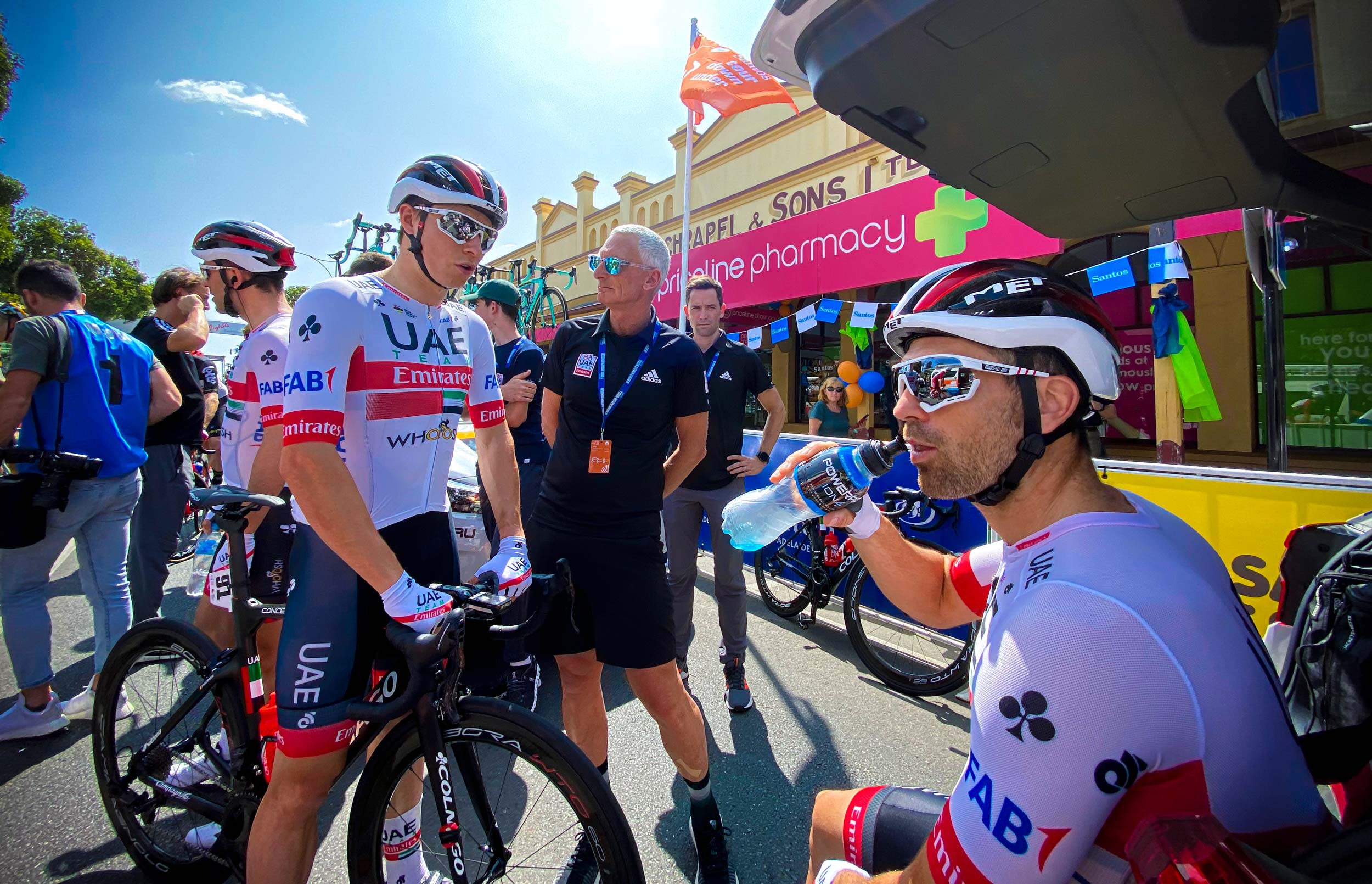 Ask those who know about cycling since Peiper’s career began in 1983 and they’ll likely have an anecdote about him. He was the quintessential professional, but he also did things a little differently.

He was one of few vegetarians in the peloton during his racing days. And he was one of a handful of Australians who could crack the Euro-centric scene.

He raced 10 Grand Tours, won two stage race titles, three one-day races, and six time trials. But his measure of success wasn’t built on winning alone. It was how he conducted himself that earned him the respect of his peers. That happened early in his cycling life and it continues to this day.

But, for a while there in the middle of last year, this remarkable life was fading… even if, looking from the outside in, it seemed that his spirits were still high. He’d had a cancer diagnosis before, and he overcame it years ago – even downplaying the effect it had on his work.

“It’s something you just take in your stride,” he said back in 2018, while working at the Tour de France as a directeur sportif of the BMC Racing Team.

He had been cleared of the illness. He was healthy. He was back on the bike. But then scans revealed that what began as prostate cancer had spread.

Early in 2019, Peiper’s cancer had reached his lungs and ribs and the diagnosis wasn’t quite as optimistic the second time around.

He still had a job in cycling. And UAE Team Emirates, which offered him a role at the start of 2019, supported him throughout his treatment last year. He wasn’t able to attend all the races he’d have liked. The Grand Départ of the Tour de France, for example, was only 40km from his Belgian home… but Peiper couldn’t go.

He didn’t get to Brussels for the opening stage, but he did stand on the muur in his adopted hometown of Geraardsbergen and watch the peloton pass on 5 July 2019. But he was a spectator of a sport that has become his life.

– Peiper on cycling and cancer: interviews from July 2019 (below) –

Two hundred days after the interview I feared would be our last, we were talking about cycling again. He was behind the wheel of a team car, I was in the passenger seat. He was racing again – as a DS, admittedly, but the competitive spirit never dies. 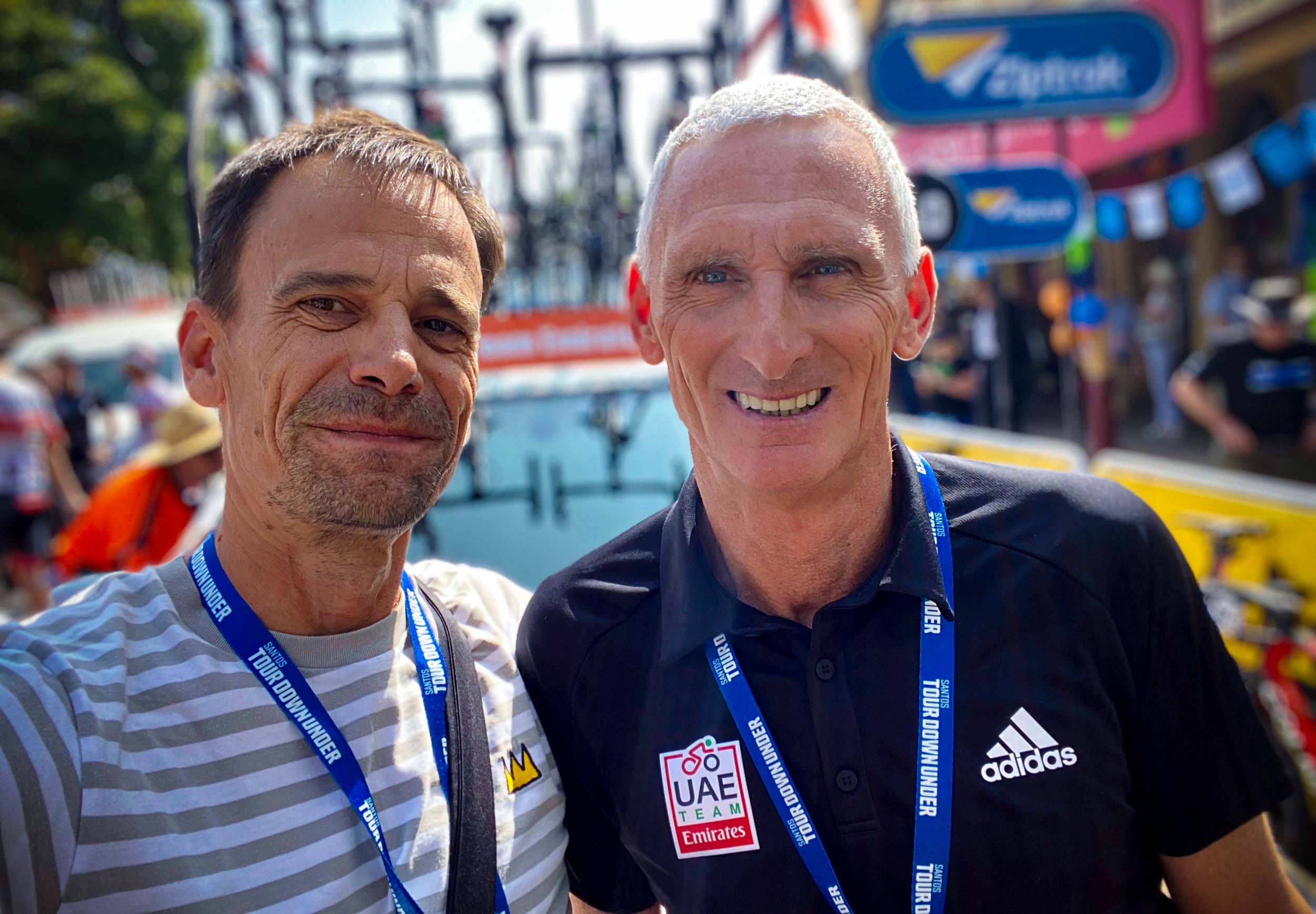 Once the season gets underway, it’s difficult to keep up to date with all the cycling results. There are often multiple races going on simultaneously and different priorities are given to one event over another. We don’t get to see every win and certainly rarely get an insight of what it’s really like to be in the convoy behind the peloton.

When Allan Peiper is at a race, however, he always goes out of his way to make me feel welcome.

I’ve watched plenty of races from the passenger seat of cars driven by Peiper since he made his initial return to racing – as a directeur sportif rather than a cyclist – back in 2005. We have shared many stories and learned about each others’ lives while following bike riders on roads and lanes around the world.

We became friends long after I first learned of Allan Peiper’s cycling exploits and it remains a privilege – and a joy – to spend time alongside him while he does a job that is anything but ordinary.

He has taught me about patience, tactics, and resilience. He has held composure at times of extreme stress and is able to maintain a smile even in the most absurd of situations.

While at his house in Geraardsbergen in July 2019, he comforted me while I broke down because of his illness. He put his arms around me in an embrace that meant much more than I could ever express.

Later, after a coffee and biscuit and a healthy chat about the Tour de France and a range of other topics, he walked me back to my car. Before I drove away, he peered in through the window and told me with conviction, “Mate, I’ll see you in Adelaide next January,” and then he smiled.

He can cheer a bloke up or guide someone to victory with what seems like no effort at all. My tears had stopped and I even conjured a return grin, although I had my doubts. My mate, an inspirational bloke who was the personification of strength and grace when he raced his bike – and a picture of health long after his competitive days – didn’t look so fit.

The chemotherapy was taking a toll. He was losing hair and had lost his taste long before my visit. He was thin and although he put on a brave façade, it was obvious that he too was uncertain if this would indeed be our last goodbye.

Still, he tapped the roof of my car, leaned in and said: “We’ll drive together in stage one of next year’s Tour Down Under and remind ourselves what brought us together, okay?”

And I tell you all that to explain why the video of stage one of the 2020 Tour Down Under is about much more than just another bike race.