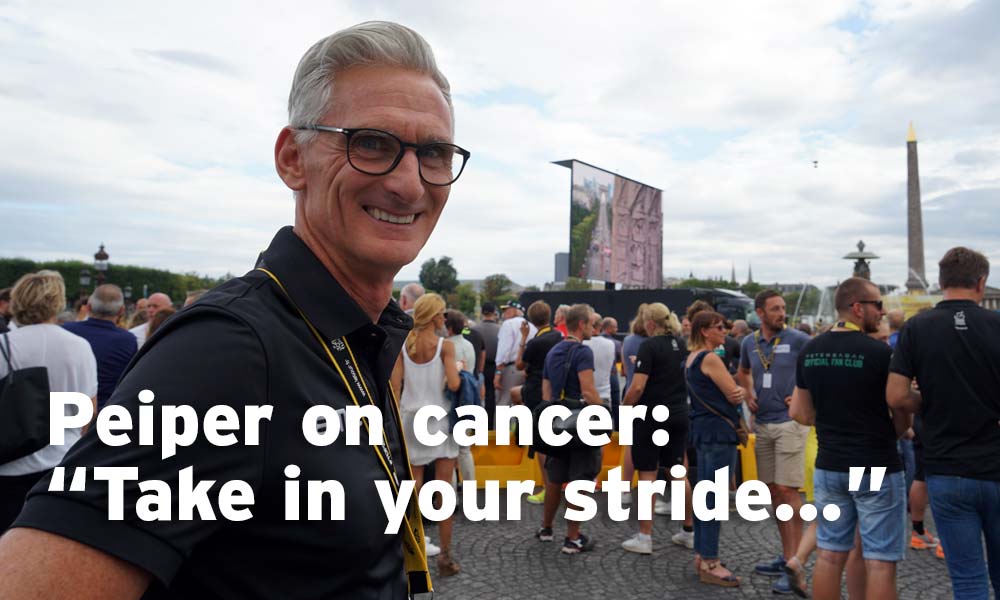 Peiper on cancer: “It’s something you just take in your stride”

At the start of Le Tour of 2018, Allan Peiper told RIDE Media this was the three weeks he’d been waiting his whole life for. The race didn’t go as planned but he continues to live the cycling life – despite a significant personal issues.

Allan Peiper has been the sporting director at BMC Racing for several years. He spends a lot of his time in the office “solving problems”, of it’s logistical, sometimes it relates to riders, other times it relates to equipment. But the role offer variety and keeps the 58-year-old on his toes and looking spritely years after his own racing career.

He was excited by the prospect of the 2018 Tour de France and still upbeat at the end of it all despite the original plan not coming to fruition.

His team led the Tour for a week and won the TTT in sensation style on day three.

BMC Racing also signed a new title sponsor for a three-year deal and the team that has been coloured black and red since 2010, is likely to turn a bright shade of orange in 2019.

CCC is an existing cycling sponsor but the Polish company will arrive in the WorldTour next year with the nuts and bolts of the team currently known as BMC Racing.

Peiper is yet to formalise what his role will be with the team, if there is indeed any ongoing position. He wants to be part of this cycling life but he also has to consider a few other things that are going on at the moment.

A few years ago, he had an issue with prostate cancer but it seemed that the early intervention had been successful and the surgery had done what it was supposed to do. Late last year, however, signs of the Big C returned in some tests and he has been working through trying to solve his health issue for a few months.

“I’ve had a couple of operations and 40 doses of radiation last winter dealing with this problem,” he told me, “and I’ve got some more tests coming up next months.”

He hinted of the return of cancer at the Grand Départ but also said he wasn’t going to let it “spoil the race”. He isn’t being dismissive of the magnitude of what could happen if the treatment doesn’t go well, but Peiper is also not surrendering and stopping other duties just to manage his health concerns.

“I think it’s something you just take in your stride after a while,” he said on the final day of the Tour. “Your resilience to deal with problems and handle them at the same time as you’re dealing with other life just becomes bigger.”

I raised the question about cancer unsure if he wanted to talk about it or even let anyone know, but he told me afterwards: “It’s true. It’s happening. But please mate, don’t make a fuss about it. There are other real problems in the world…”

Peiper is a stoic gentleman, a cunning tactician, a fantastic ambassador for cycling, and a bloody good bloke. He has watched his sport evolve over the years and there have been times when he’s frustrated by it, but not even cancer was going to stop him from seeing if he could help another Aussie with the yellow jersey.

It didn’t turn out that way but let’s hope he’s back at the wheel doing the job he loves with good health for many years to come.

– To listen the interview click the SoundCloud file and/or read the transcript below. –

RIDE Media: We spoke at the startso it’s right that we speak at the finish. I’m with Allan Peiper. We’re standing on the Place de la Concorde, the bunch is going around doing laps of Paris and you’re sitting here with a smile on your face. A different outcome to what you started to the Tour with…

Allan Peiper: “Yeah, obviously we were hoping on a Richie [Porte] podium here in Paris but it wasn’t to be. Again. But all in all, I think the team rode really well. We had the yellow jersey for eight days with Greg Van Avermaet and winning the team time trial and in the final part of the Tour [BMC Racing] was in breakaways or trying to be a part of the animation of the race.

“I think that’s the spirit of it, to try and always be in there and fighting on.”

Rather than go over what may be the ‘expected’ characters, I wonder if you can give me a little overview of Paddy Bevin, for example. He is a DNF of the Tour but he turned up and he put on a good show for the first few days, certainly helped where he could. Can you just talk about some of the guys who maybe don’t get the headlines on BMC Racing?

Allan Peiper: “Yeah, we brought Paddy into the Tour de France line-up to help with that team time trial which we won by three seconds. And, arguably, you could have said it would have been a good selection because he might have been – and probably was – the difference between winning and losing on that day…

“A good helper during the race. Did the best he could and unfortunately got a gastro problems and was taken out of the race with eight or nine days to go.

“Micky Schär, obviously one of the big hitters in our team, you don’t see him that much but definitely one of the big motors in the peloton – always ready to help his team leaders and be up the front.”

And he also had a breakaway on the way to Valence, and Andy [Rihs] would have been proud of that one – flying the flag for Switzerland…

Allan Peiper: “Yeah, exactly and he only got caught three kilometres from the finish and today on the Champs-Elysées, he’s in the front again with a group of six away.

“Simon Gerrans also – he had a career of his own winning some really big races but he came here to the Tour de France to help Richie Porte, has been a good road captain during the race and also playing his part in the team spirit.

“So, there are guys who are the unsung heroes as well.” 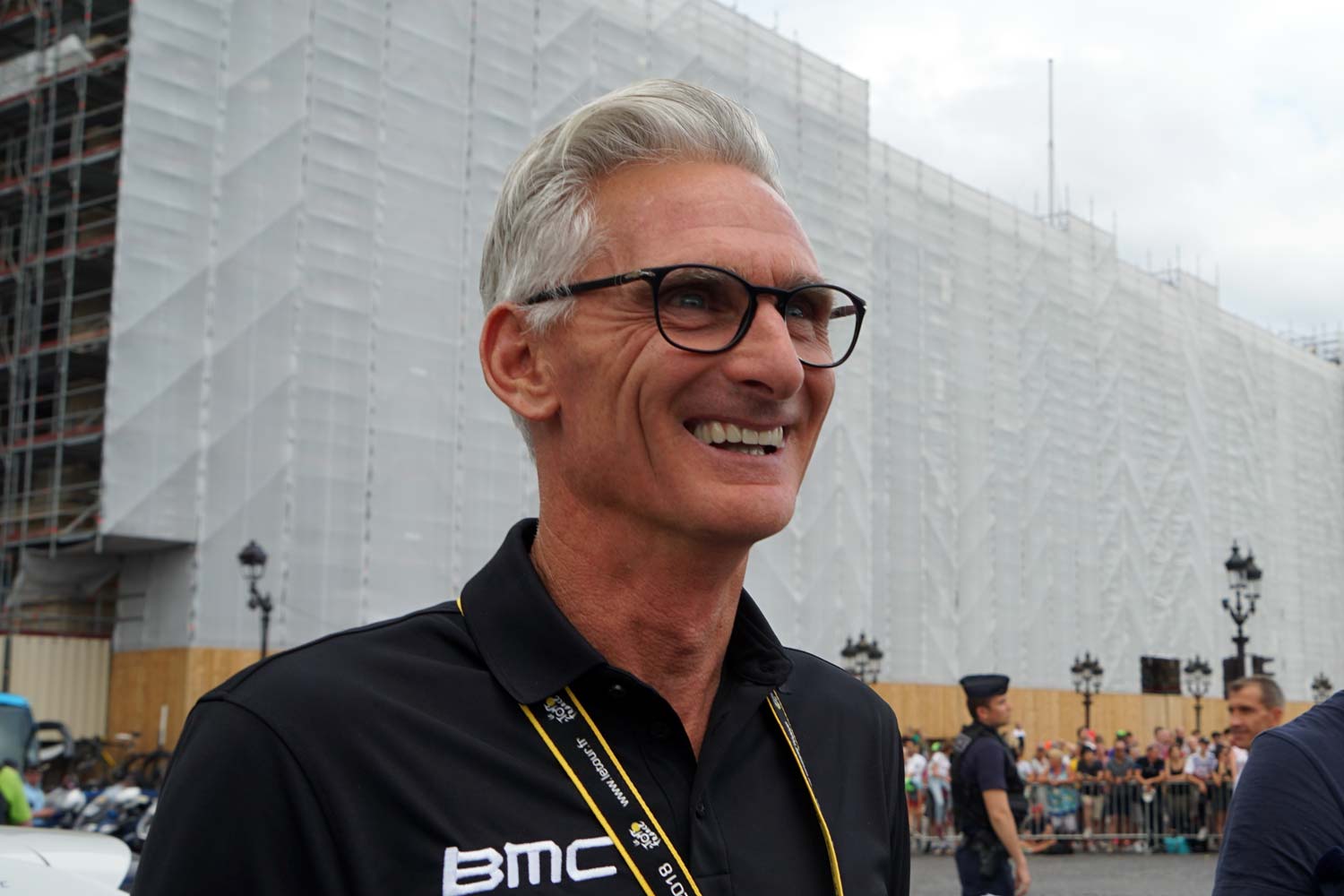 And what do you take home from it? I mean, apart from the fact that you might have a job again next year (thanks to the arrival of CCC as a title sponsor for 2019); you’ve got a new sponsor, that was announced mid-Tour. But it will be a different environment, I would imagine at was BMC Racing for 2018. By the time I get off the plane (going back to Australia) we’ll have some news about Richie. What about news about Allan Peiper?

Allan Peiper: “Well, I’m not sure exactly what I’m doing at the moment. Yeah, there’s been a CCC [merger], they are our new sponsor for 2019 – and for three years, which is a great accomplishment and project moving forward with some stability.

“I think it’s going to be rebuilding again and taking stock of where we are next year, building that roster – which will be a challenge, but also it’ll be an exciting part [of the project].

“What my role will be in that? At the moment it’s still a little bit undecided.

We could stop the interview there. But I’m going to put something to you and if you don’t want to talk about it, then we move on… but you’ve had some health issues. Can you talk about that at all? Is it public knowledge?

Allan Peiper: “Yeah, for sure, that’s public knowledge but, look, being healthy or unhealthy in this society is a growing concern for a lot of people.

“I’ve had a couple of operations and 40 doses of radiation last winter dealing with this problem and I’ve got some more tests coming up next months.

“I think it’s something you just take in your stride after a while. Your resilience to deal with problems and handle them at the same time as you’re dealing with other life just becomes bigger.

“[There are] a lot of people in the same position around the world so I’ve just got to get on with the job at hand.”

So it’s a cancer?

But you’re at the Tour de France after radiation treatment and just treating it as though it’s an ordinary July?

“You know, as I said, you’ve got to get on with your life and you take it as it comes and hopefully there’ll be quite a bit to come for me.”

Well, thanks for sharing. We’ve grown to know each other over the last 20 years and cycling is a big part of what I am and it’s a big part of who you are. It’s wonderful that a sport can bring a couple of blokes with an eclectic background together. And it’s been a pleasure watching your journey and I hope that your health is okay in the next little while – and I hope that we see you at the Tour next year. 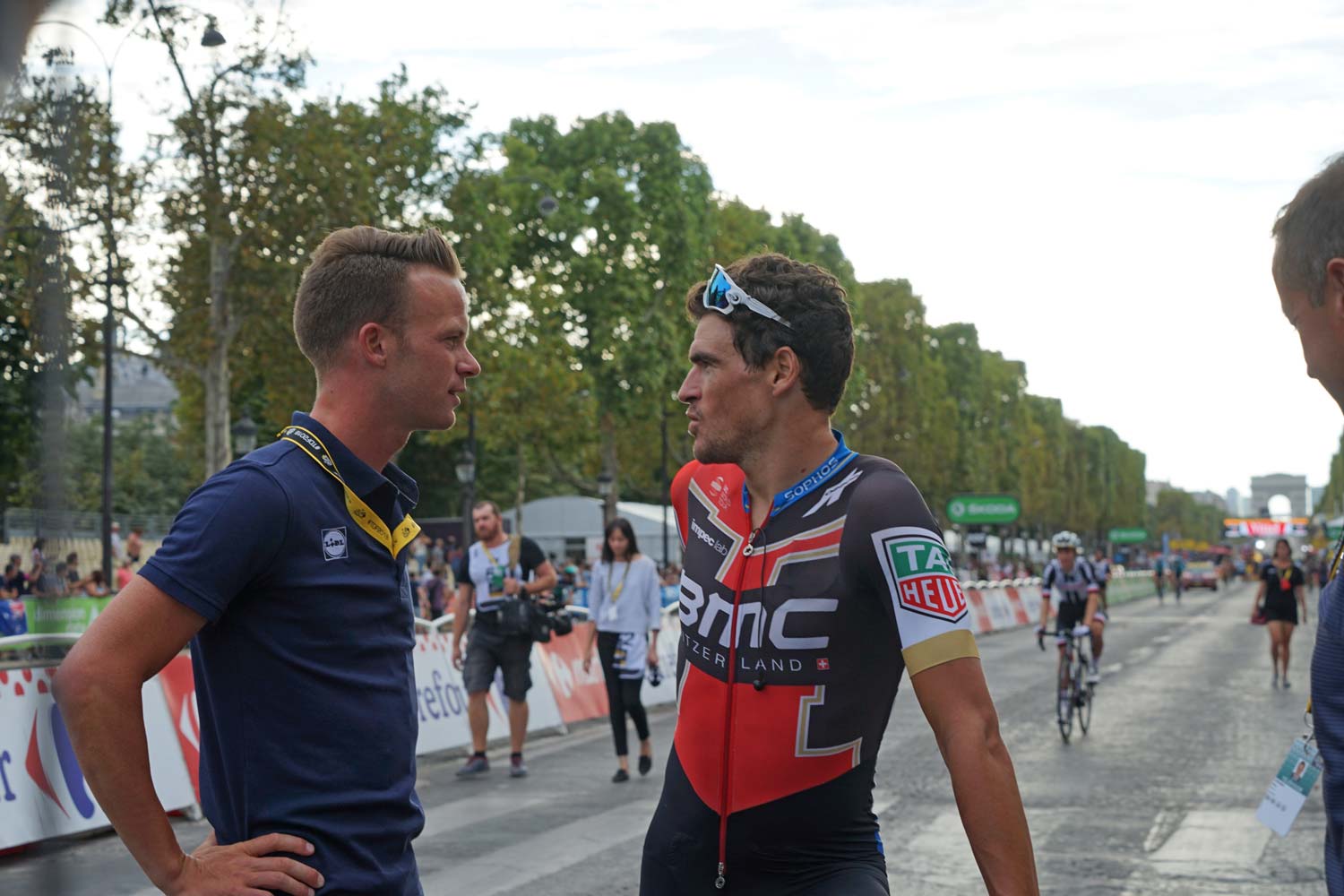 Greg Van Avermaet (above) helped get BMC Racing significant exposure during the Tour of 2018.

A premiere cycling team knows it’s critical to choose the right riders for the right race—one for hills, one for sprints, one for endurance. At Bennelong Funds Management, we’ve curated a team of boutique fund managers who specialise in everything from Australian equities to global real estate, and outperform in different market conditions. That kind of diversification means we may have a fund for you—wherever you are in your journey.