The feedback for the interview with Gerry Ryan has been almost universally full of praise. It is clear that this man has had an impact on Australian sporting culture. And although much of his influence has to do with financial investments, it’s important to note that his strength of character – and the conviction he has to showcase cycling in a positive light – cannot be ignored.

Amongst myriad posts offering compliments, someone quietly added: “Pains me to say it, but to so many it is all about the dollar.”

Yes, money talks. And yes, Gerry earns attention for his contributions. But there’s more to it than spending – and spending alone.

At the recent Tour Down Under, while in discussion with a heavyweight from the Australian cycling industry, this comment was offered: “There are little nuggets of wisdom in his words that take time to absorb. You’ve got to be patient with Gerry because he’s methodical and he considers every comment. Sometimes it may seem flippant or meandering, but if you listen closely, you’ll learn plenty.”

What is clear is that cycling has benefitted from the passion this businessman has for the sport. He may be a fan, but he also sees the bigger picture of what is on offer. And it’s this vision that makes Gerry Ryan special.

There aren’t too many involved in bike racing who can follow the peloton in a team car in South Australia on a Saturday and share a meal with Sir Elton John the next day. But that’s how it was for Ryan, who left the TDU a little early last week to catch up with an acquaintance who he knows through other business ventures.

It’s name-dropping, but only by proxy. He didn’t announce it, rather the pending meeting with Sir Elton came up because I asked if Gerry would be in the passenger seat for the Queen Stage of the TDU, when Daryl Impey was in the leader’s jersey and Mitchelton-Scott had car number-one in the following convoy.

“No, alas,” he replied. “I’ve got a meeting in Melbourne with a singer.”

No ordinary singer, and no ordinary businessman… but I digress. 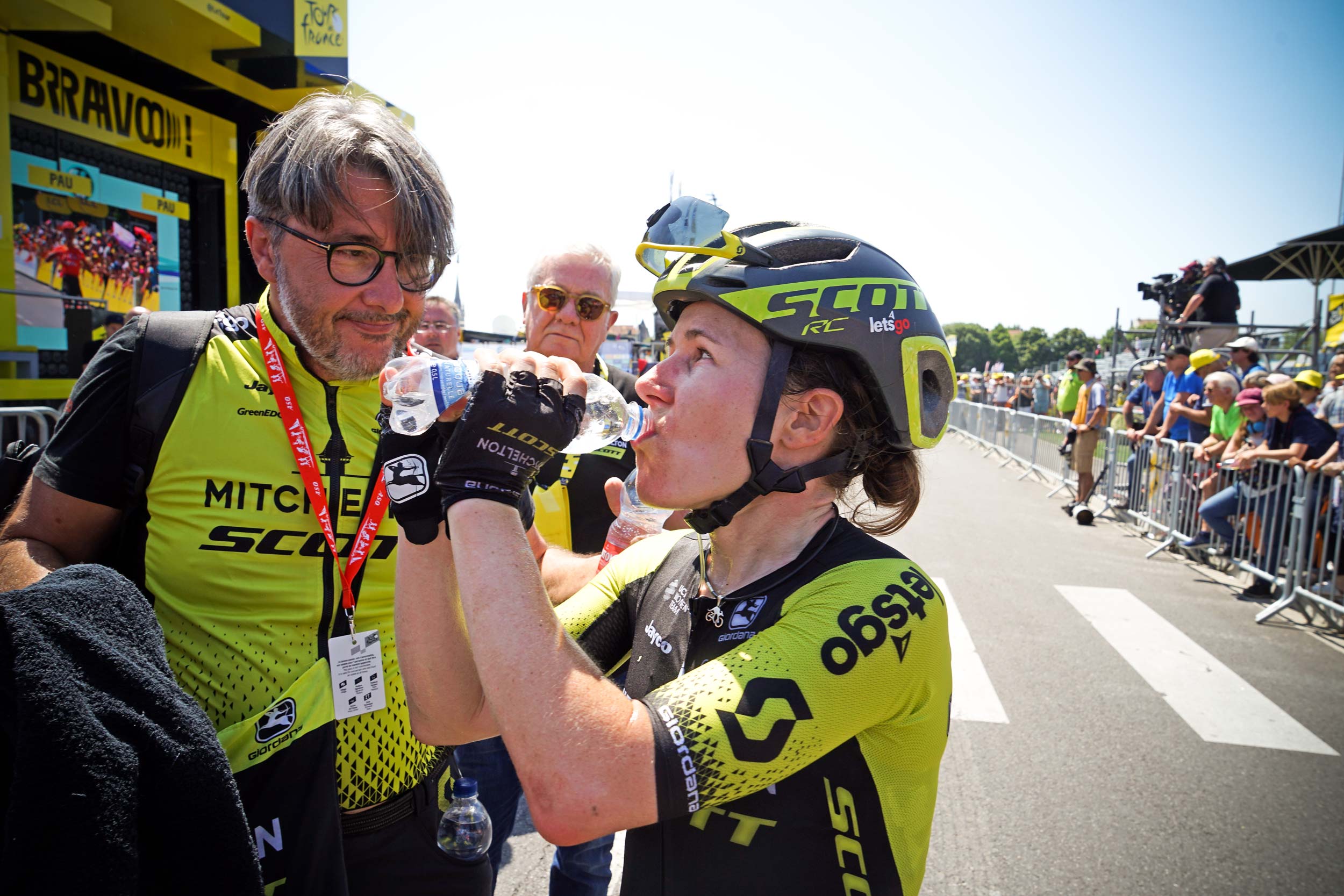 The point of this follow-up post is to highlight a few comments added to RIDE Media’s social media pages overnight. They come from veterans of the cycling world, parents of athletes who have benefited from Gerry Ryan’s generosity, and fans of bike racing.

There is a mix of sentiment but also a consensus, an appreciation of his input.

Furthermore, there’s an acknowledgement about the benefits of his resilience.

As is concluded in the interview, Gerry is resilient. He is principled. He is many other things as well… and above all, he is generous. And that’s something that isn’t too common in the world of professional sport or business.

Below are some comments from readers

(Don’t hesitate to share your thoughts and perhaps even encourage your friends to invest half an hour to watch the interview. Maybe, just maybe, they too will appreciate one of Gerry’s “nuggets of wisdom”. We’ll update this page should other contributions be forthcoming… Rob)

“A wonderful man whose generosity has enabled many young Australians to chase their dreams in the pelotons of Europe and on the boards of velodromes all around the world.”

“This amazing man is continually the inspiration who keeps so many people achieving in this country.

“When he says he grew up in humble family circumstances that was exactly the case.

“[Gerry’s] dad passed away at a young age and mum brought up a bunch of kids on her own in a rented farm house.

“What he has done across this country for underprivileged kids as well as his outstanding input into regional sports clubs and the big league sports world is second to no one.

“I believe he is one of our country’s greatest sportsmen.

“Not an athlete but a sportsman of the highest level.

“Without Gerry Ryan we would have a very different history (and future) indeed.

“Thanks, Rob, for this candid snapshot of such an incredible person who we owe more than words can tell.

“THE most interesting cycling related interview I’ve watched in a very long time!

“That Australian cycling continues to be the beneficiary of Gerry Ryan’s amazing generosity and love for our sport is, frankly, astounding – especially given the way he has been treated by those officially charged with fostering the development of the sport in this country.

“It seems that Australian cycling has missed, or at least not fully taken advantage of, two big ‘tail winds’. One was the opportunity to truly capitalise (at a grassroots level) on the tidal wave of publicity surrounding Cadel’s 2011 Tour de France victory and the second appears to have been the sport’s administrators failure to properly recognise the importance of – and value of – benefactors like Gerry Ryan; that he still loves being involved is testimony to his very positive (and competitive), very generous, attitude.

“Many thanks for a great interview, Rob.”

“An amazing and incredible journey. May the journey and legacy continue. Thanks Gerry for your support and generosity.

“I suppose, in many ways, we also owe this to your mum and the values she passed onto to you and no doubt your siblings.

“I feel proud to be Australian when I listen to this interview and hear about your journey of which in many ways you have allowed us all to share. 👌💜”

“He also saved the Dandenong Rangers / Southside Flyers WNBL team! There are a lot of sports greatly indebted to Gerry!”