Ride Diary: When a small crash spoils a cycling holiday

For a brief moment this winter the sun came out in Sydney and, for a few days, conditions were ideal for cycling. Alas, that period also coincided with an enforced break from cycling. Here’s a quick explanation…

It had been considered for months: a holiday with a camper van loaded with bikes and cycling equipment. The destination was unknown, but the quest was to go somewhere – anywhere – that the sun was shining and the roads were largely free of traffic and traffic lights. Eventually the right time arrived and we reserved a two-berth ‘Escape’ van from Let’s Go.

My 17-year-old and I set off on a Saturday morning, destination still unknown.

Inside the van were three bikes: my Focus Izalco Max, plus a couple of gravel bikes – a Canyon Grail for me and a Trek Checkpoint for my son (and maybe even vice-versa, for the sake of comparison).

I’d also packed a range of product that I’d been sent for review that I’d hoped to film, photograph and consider while on what was to be a six-day cycling holiday. In the mix of boxes was a POC Ventral Lite helmet, some new winter cycling kit from Santini, new shoes (the Ultimate from Nimbl and Surge Pro by Giant) and a few other bits and pieces that I was looking forward to using.

The BOM suggested that, in all directions, it was going to be “80-90 percent chance of rain” and the radar images confirmed that forecast. With this in mind, we aimed in a direction I don’t often take when going on a road trip in a car: south.

Of course, I’ve been south from Sydney before but never ventured any further along the coastline than Ulladulla. Within a few hours, I’d realise what a stupid mistake this has been. As Sydney fades into the distance the vistas get more spectacular, the traffic lighter, and great trails for gravel riding become more regular. 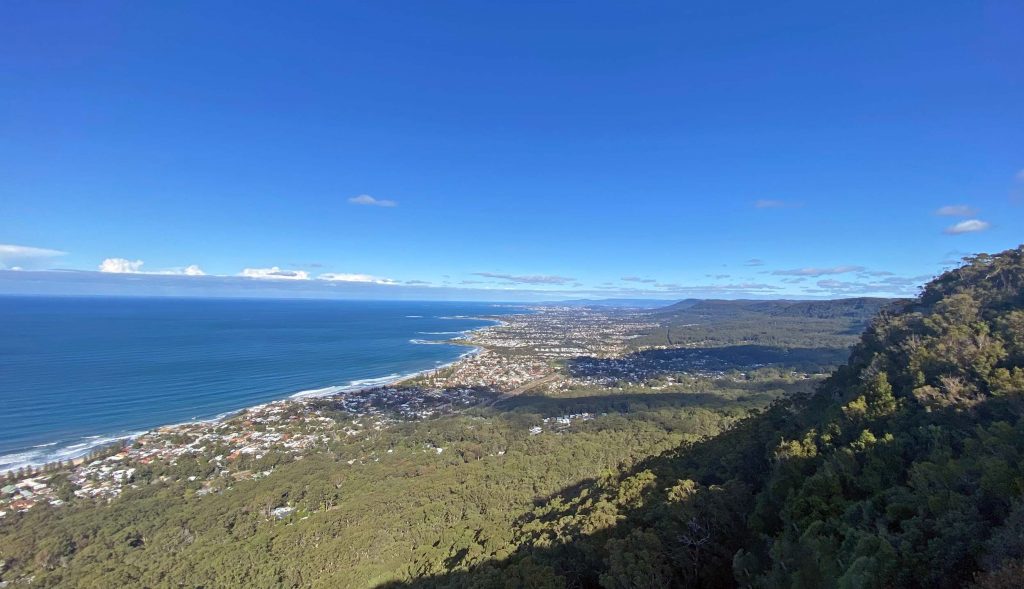 Our first stop was Sublime Point just north of Wollongong, but only so that I could literally point out the course for the road races of the upcoming world championships to my son. He was impressed, as anyone who has ever visited the lookout always is.

This is a spectacular place to see the coastline, and a reminder of why The ’Gong is a great place to ride a bike. It’s the only UCI Bike City in the southern hemisphere, a tag that requires a certain level of infrastructure (for UCI approval) as well as the staging of at least one world championships (coming soon).

Onwards we drove and the weather didn’t improve but there was hope that the rain would soon abate and the cloud cover lift. Ever the optimist, I suggested we’d “be fine, don’t worry”. With a teenage soundtrack selected on Spotify the road trip was underway and we agreed to drive until 3.30 and then decide where we’d set up camp for the night. 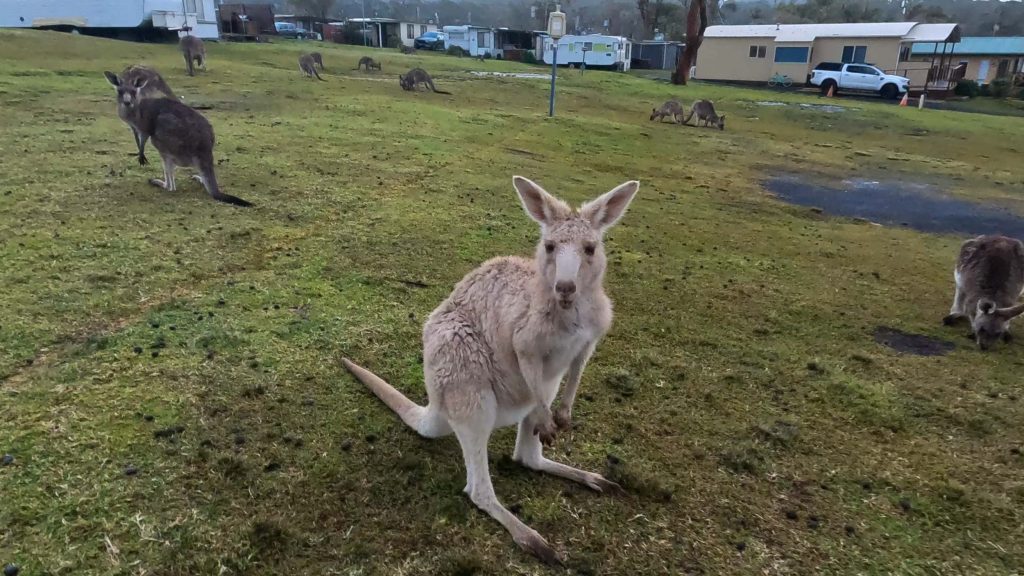 Eventually we rolled into Merry Beach, after taking a left turn a little beyond Ulladulla. Using the Let’s Go app (which offers hundreds of campsite recommendations) we booked into a beachfront setting and within minutes the van was set up, rear doors facing the ocean, and with a mob of kangaroos for company.

Dinner was cooked, bikes were prepped, WiFi connected, TV tuned in… and we were ready for the broadcast of the Tour de France later in the evening. #VanLife seemed to agree with us: we were warm, dry and comfortable… but it was blowing a hooley outside and the rain showers continued. Little did it matter. It was a trip away… the company was good and there was an optimistic mood about the adventure that had finally begun.

We got an early start the next morning and, after a short drive, enjoyed a hearty (second) breakfast in Moruya (“pie-and-sauce thanks” – it was road trip after all) followed by brunch at a lookout in Narooma (tuna sashimi). The clouds were lifting and even though the wind was still blowing, it seemed as though conditions may clear by the time we were ready to ride.

While taking in the beauty of Wallaga Lake, we consulted the Let’s Go app one more time and determined that Bermagui would do nicely for our second night away. A quick phone call and our camp site was booked, and we were ready to settle down again, then kit up and hit the trails.

By the second stop we were already veterans of setting up the camper and all was in position by early afternoon. The bikes were unloaded and the trails we saw as we drove into Bermagui were calling. 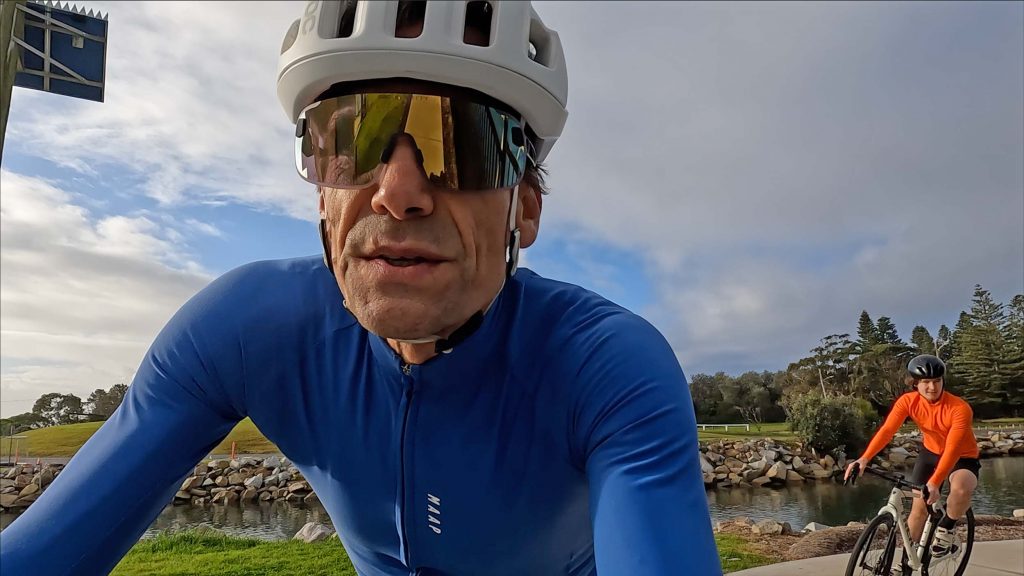 Like many towns around Australia these days, there has been considerable investment made into cycling infrastructure and we followed the bike path back to the north of town. When it suddenly stopped, we kept rolling… trying to determine where to go next.

We rode on for a few more minutes, crested a small hill on a road aiming towards the coast then sped up for the descent. Halfway down, my son spotted what he thought was a trail on the left of the road and, with minimal notice (ie. “let’s go that way”) he turned… and I slammed straight into him at around 45km/h.

He held the bike up, but I wasn’t so lucky. My handlebars turned, his top tube hit my front brake, the callipers locked up and I somersaulted onto the rough bitumen below.

Landing with a thud on my left hip, I immediately knew it wasn’t good.

Crawling off the road, we both noted that we were lucky it was a quiet road, that there was no traffic, and – of course – that my bike was okay. 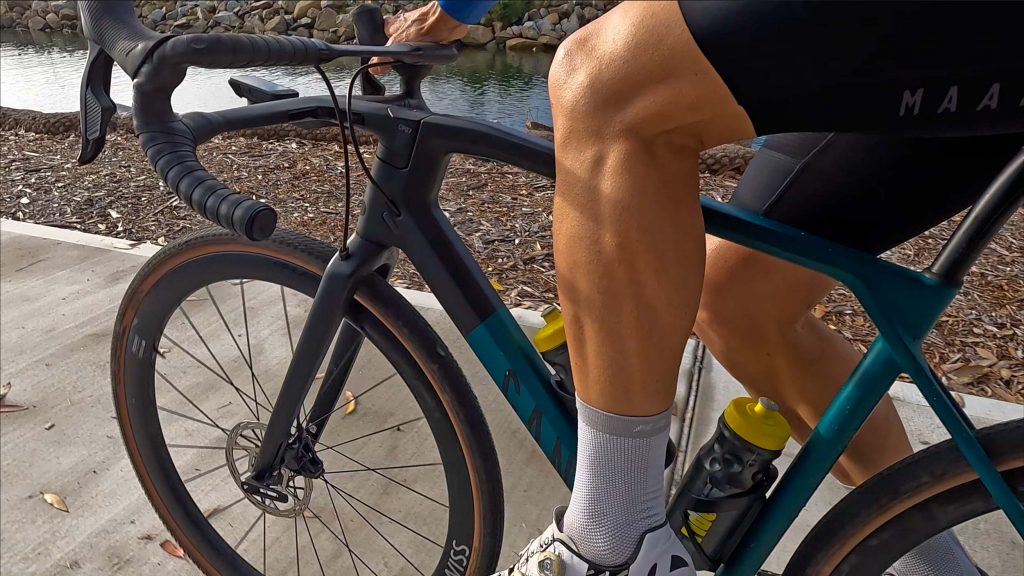 When I stood I inspected my wounds: a bit of blood on my left ring finger, a tiny cut… nothing to worry about. My ribs were sore and there was a sting near my hip bone.

As per usual, I was carrying my GoPro in the middle of my jersey pockets, my phone in the right-hand pocket, and sundry items in the left pocket… keys to the van, a few hex keys (just in case), and my wallet.

Here’s what I learned a minute or two after my crash:

I could walk. I could talk. I didn’t feel concussed.

I inspected my helmet and could see that there was a very slight indentation on the rear left of the POC Ventral Air MIPS. I had pain all over my body, but my head was okay, not sore at all. My neck moved well and there was no hint of spinal damage.

Can I credit MIPS for not making a bad situation worse? Maybe. But I’m certainly not going to repeat the somersault with a non-MIPS helmet (or no helmet at all) as part of any product test protocol.

What I can say is that there was huge relief that my injuries weren’t worse and, at first glance, my wounds seemed minimal.

Then I lifted my jersey and pulled my knicks down a little to inspect the sting on my hip. You know that cheeky white smile that you get from freshly cut flesh? The one that greets you moments before the blood starts to trickle, then flow? Well, that was looking back at me as if to say, ‘Buddy, right now you feel okay… that’s the adrenaline doing wonders for you…’

My first reaction was, ‘Oh man, this is going to hurt later tonight…’ And the next thought was, ‘I better get myself to hospital, quickly!’

Then, as if on cue, my wound switched into phase two: white turned to red and suddenly it was time to get some attention. 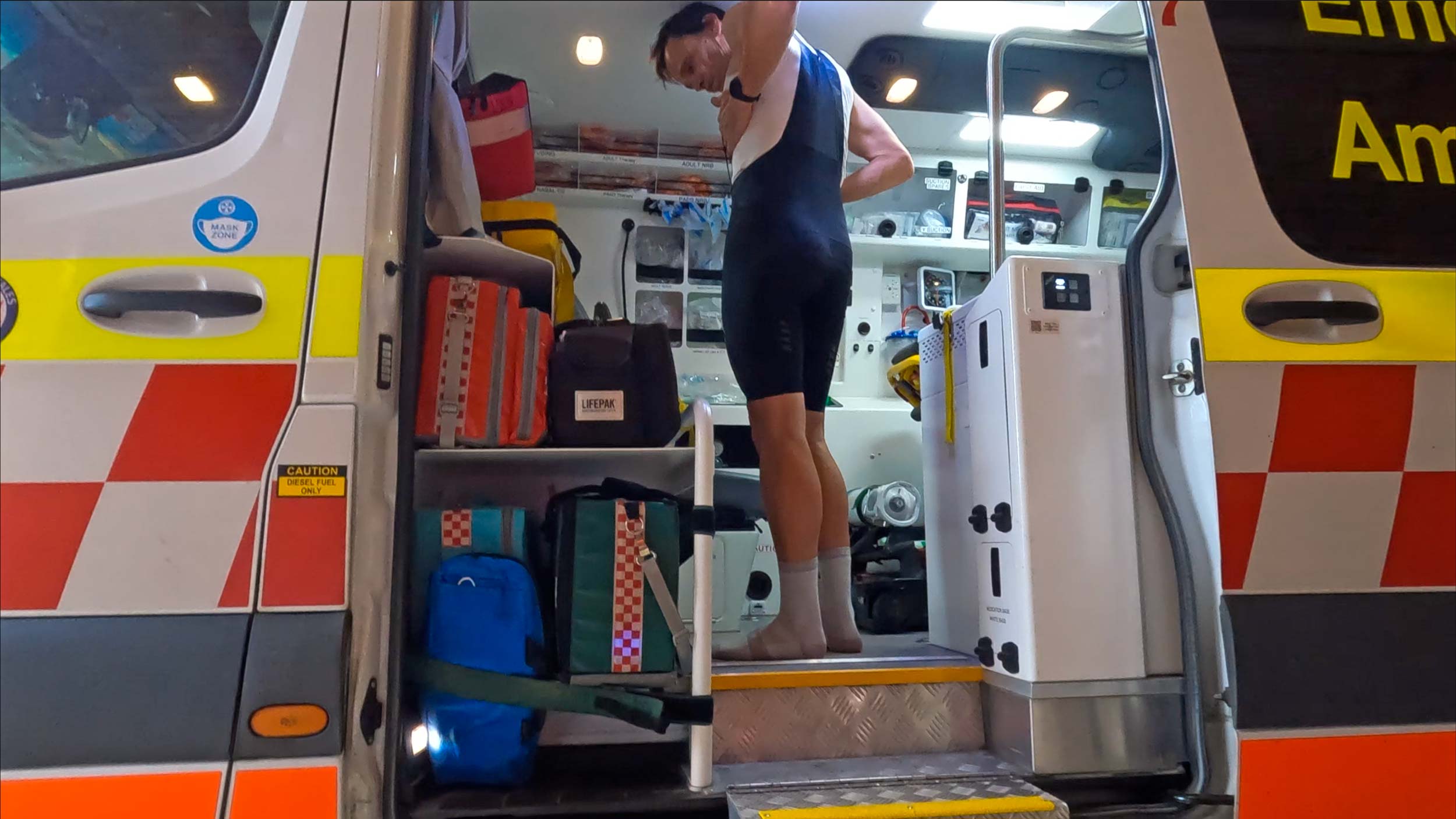 The paramedics were brilliant. Aren’t they always? Their first, calm reaction to our appearance at the ambulance station in Bermagui was, “Oh, a bike crash eh… you seem to be moving okay. Let’s have a look. Step inside the ambo mate.”

I unclipped my shoes, got in the ambulance, and lifted my jersey – my beautiful blue long-sleeve MAAP winter jersey (which had only a few tiny holes from the bitumen) – and the medics got to see the rush of blood that had spilled in the time it took to ride back into town. 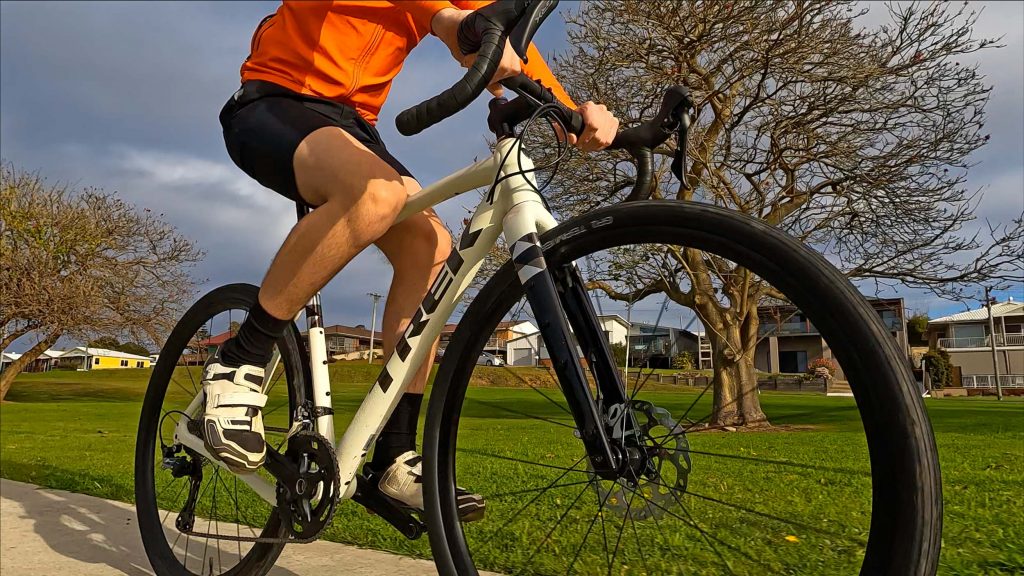 But they’re brilliant these people. They can look at a cut filling with blood and not squirm. They can even pull the skin apart and scrape out the gravel with their gloved fingers, and not hurt the patient too much. They can then stare deep into the wound and utter things like, “Hmmm, that’s an interesting cut”, or “That looks remarkably similar to the shape of a car key”, or “that looks like a very evenly shaped hexagon hole”.

Then, without showing any sign of feeling feint – and while offering nice soothing tones – they might say something like, “Let’s get that cleaned up a bit, eh?”

They did a great job. They comforted me, explained the ramification of the accident, gave me and my son some water to drink. And they patched me up. Bless ’em, great people paramedics.

Back at the camper van a little while later, I could feel the swelling grow. My hip was getting bigger by the hour and the hematoma formed with surprising speed. The colour of the bruising would show a little while later and the pain in my ribs – front and rear – was intense.

It was a heavy hit but not a knock-out blow. It put a pause to the riding and turned our cycling holiday into a far more idle one that we’d planned but it was still good to be out of town for a few days. There’s nothing like a road trip with your son to highlight what’s good about the world. And there’s no faster way to get the weather to clear up than to crash and not be able to ride for a bit over a week.

Only moments after my crash happened, the wind calmed and the clouds lifted. Blue skies smiled down on us and rain refused to fall. The trails lay in wait and conditions were perfect for cycling… but I wouldn’t be riding. Instead, I’d be recuperating by the side of the van waiting for the pain to subside so I could make the drive back home without distraction.

The subsequent weekend has come and gone. The weather was glorious. And even Sydney’s roads seemed free of angry drivers. I’m confident to say that all traffic lights in the city were always green, and it would have been a fantastic time to ride. But I didn’t go anywhere. I listened to my body and heard it plea for me to take it easy, to rest, and to get better rather than risk further damage. 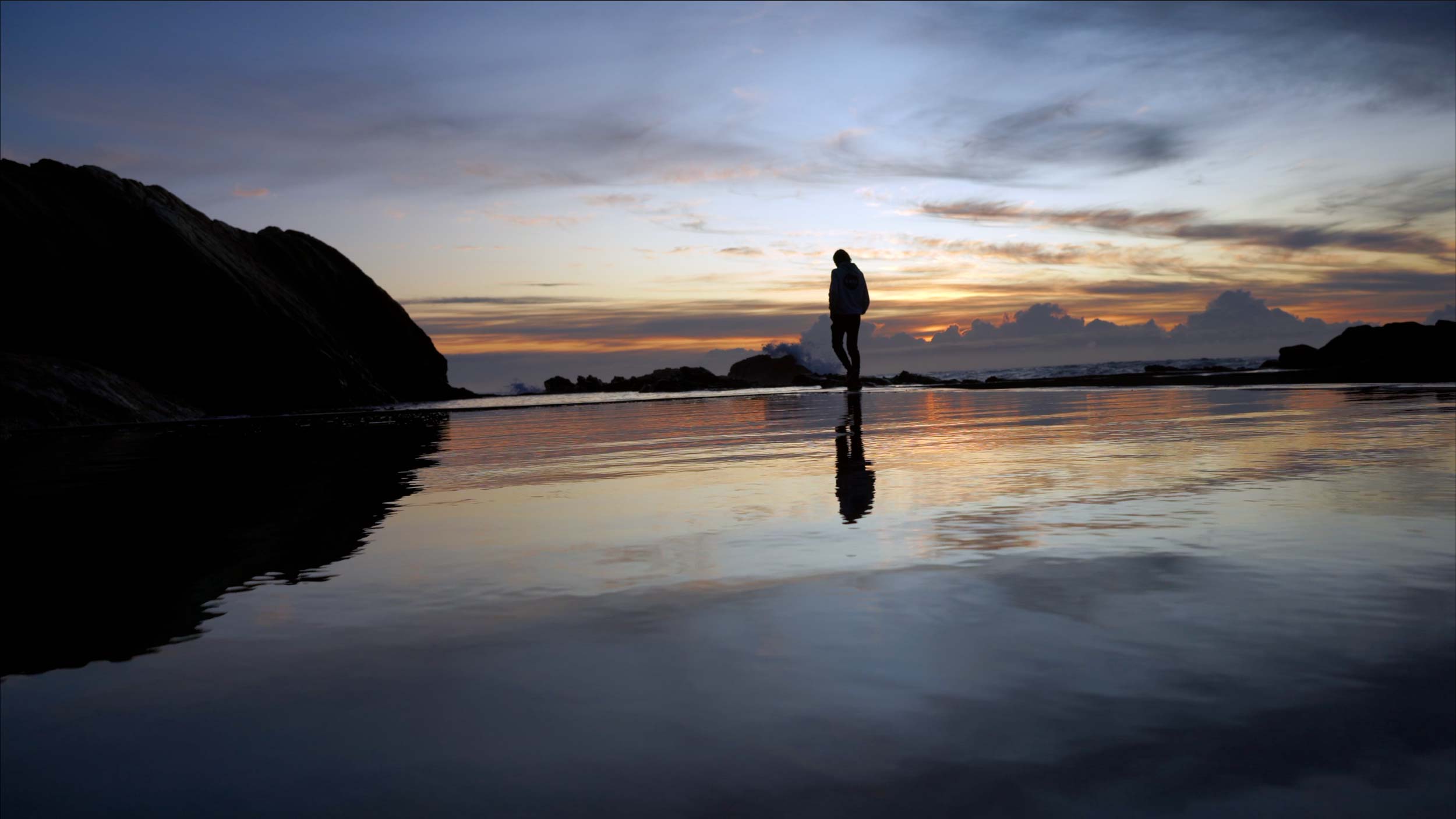 My wound is now getting itchy. The cut is healing. The colour of my bruising has turned from red to black to an odd yellow hue… and it shouldn’t be long before it disappears. My ribs still sting but my lungs are doing their job and my spleen hasn’t been damaged.

I’ve learned a lot from a road trip and a ride that lasted less than an hour. I was shaken but not disturbed. I’m recovering and I’ll soon be ready to ride again and I’m sure the next adventure will be a great one. It wasn’t the holiday I had planned but there’ll be another road trip another time. And the good news? Now I know where I’m likely to go. Bermagui seems like a great place. I’m looking forward to finishing off what I started last weekend.