The Australian track cycling championships of 2006 were contested at the Adelaide Super-Drome in the year that the Commonwealth Games were held in Melbourne. Here is a collection of images from the nationals.

Some faces are so familiar that it seems odd to know that they are still racing bikes at the highest level 14 years after these photos were taken. Others might be recognisable, but back in 2006 they were nearing the end of their racing careers.

Feel free to send in the thoughts that come to mind when you see this flashback from 2006. If you have a story to tell, don’t be shy.

My recollections of the time are considerable: it was, after all, the year when Ben Kersten, for example, beat Sir Chris Hoy to win the ‘kilo’ at the Comm Games. What an emotional overload that was, a couple of years after the youngest of the Kersten brothers was somewhat controversially overlooked for selection in the national team for the Olympic Games.

As you scroll down through these photos, you may find you remember where you were at the time and what influence cycling has had on your life since. 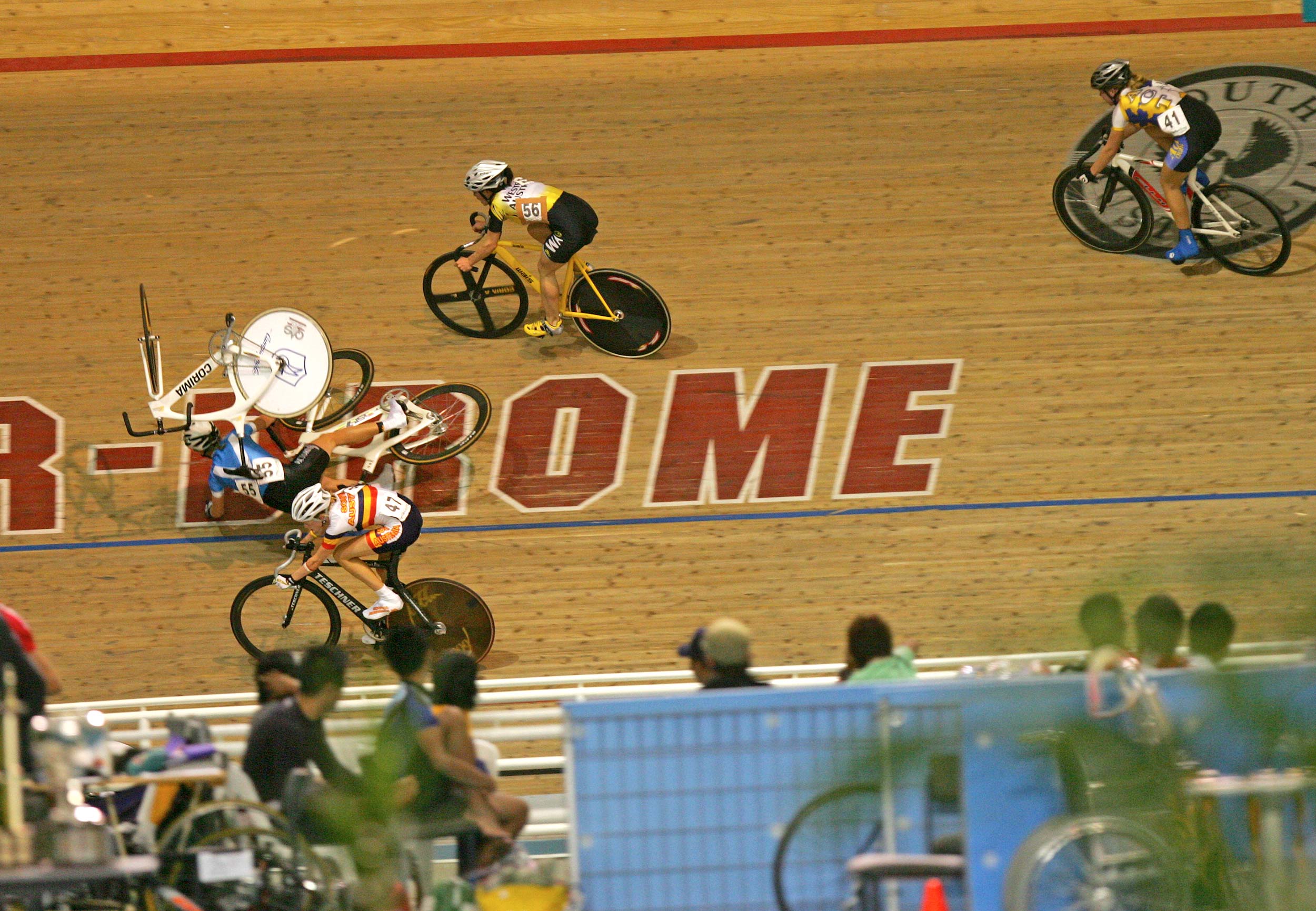 In 2006, professional road racing copped another beating, starting at the end of May when Manolo Saiz was arrested in Madrid, heralding the beginning of a protracted doping investigation that became known as Operaciòn Puerto.

Meanwhile, in Australia, there was a buzz of excitement before that scandal broke.

A week after the cobbled Classics were contested, riders like Mathew Hayman returned to Australia from Europe for a chance to represent his country in the Commonwealth Games. The rider from Canberra pulled off his first major racing coup that year, with a clever tactical display in the centre of Melbourne.

On the track, there was plenty of Aussie success but also a continuation of the GB vs AUS rivalry that really began to heat up during the approach to the Beijing Olympics.

It would be easy to go off on tangents about what happened on the Hisense Arena: about the British team pursuit triumph over Australia (in 4:02.699, yes… slower than four minutes), or Ryan Bayley continuing his keirin and sprint domination (as per the Athens Olympics a couple of years earlier), or the curious incident of the lead-out from a Brit for a rider from the Isle of Man in the closing laps of the scratch race… yes, Cav will remember it as a golden moment, but Ashley Hutchinson would see it differently.

Did someone say ‘collusion’? What, in cycling…? Nah, never!

Ah, but all that is about the Commonwealth Games that happened later. And this is a gallery from the nationals. So let’s begin to scroll and I’ll caption the images when something springs to mind. 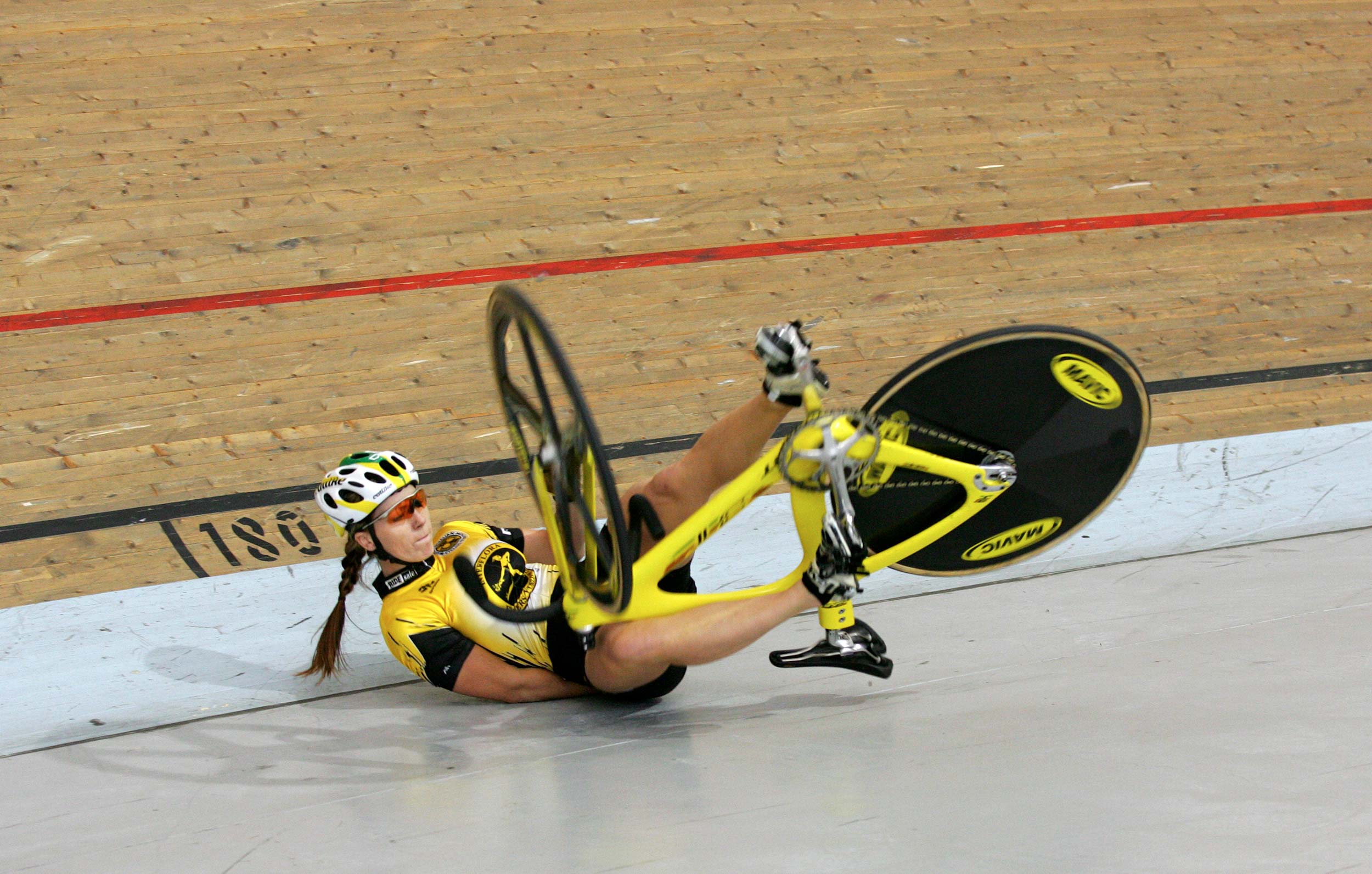 Kristine Bayley achieved plenty as a cyclist, and the sister of Ryan remains involved in the sport 14 years later… she is married to Shane Perkins, the only Australian to compete at the highest level of cycling for Russia. Kristine won the 500m TT at the nationals. 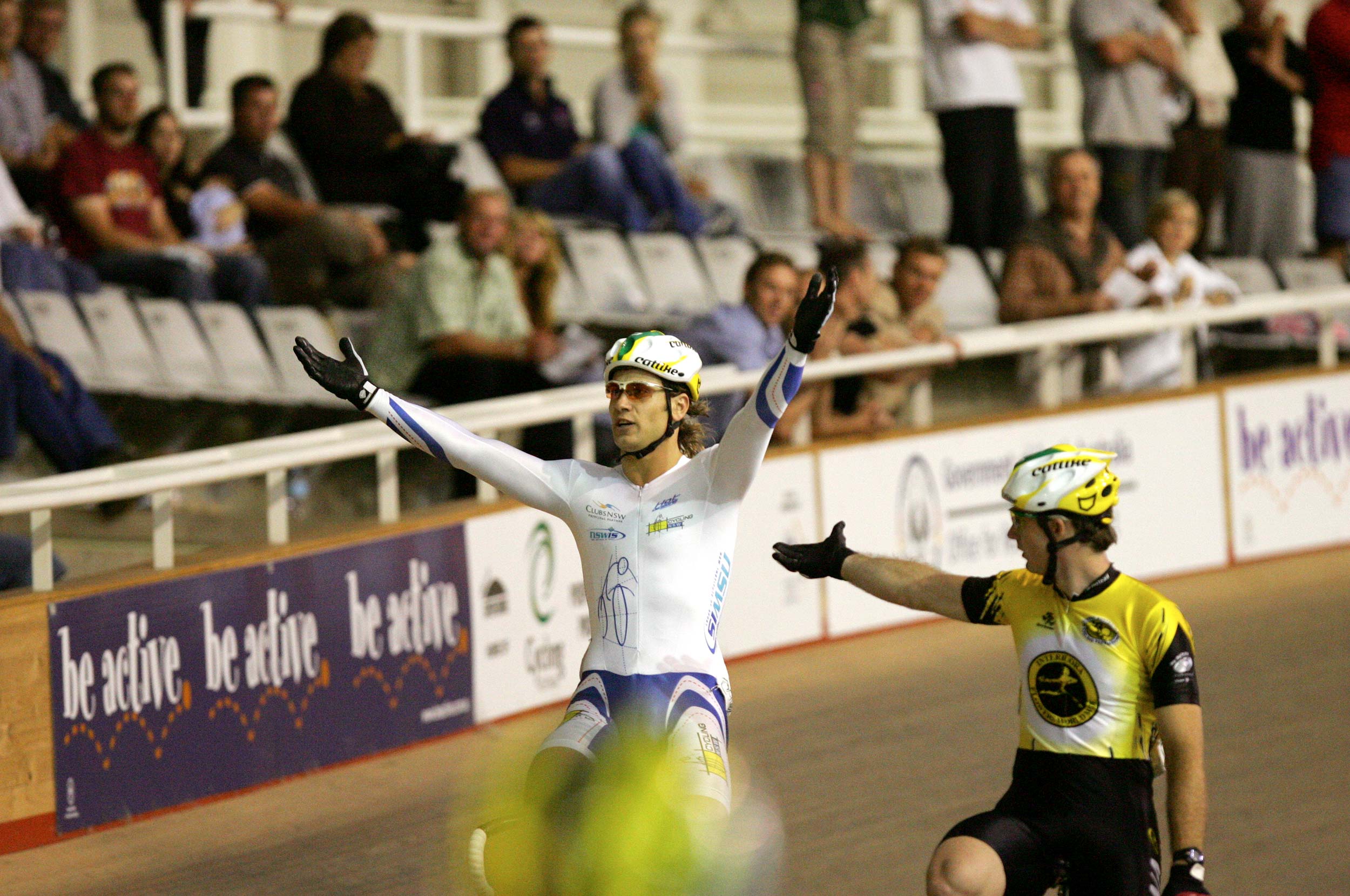 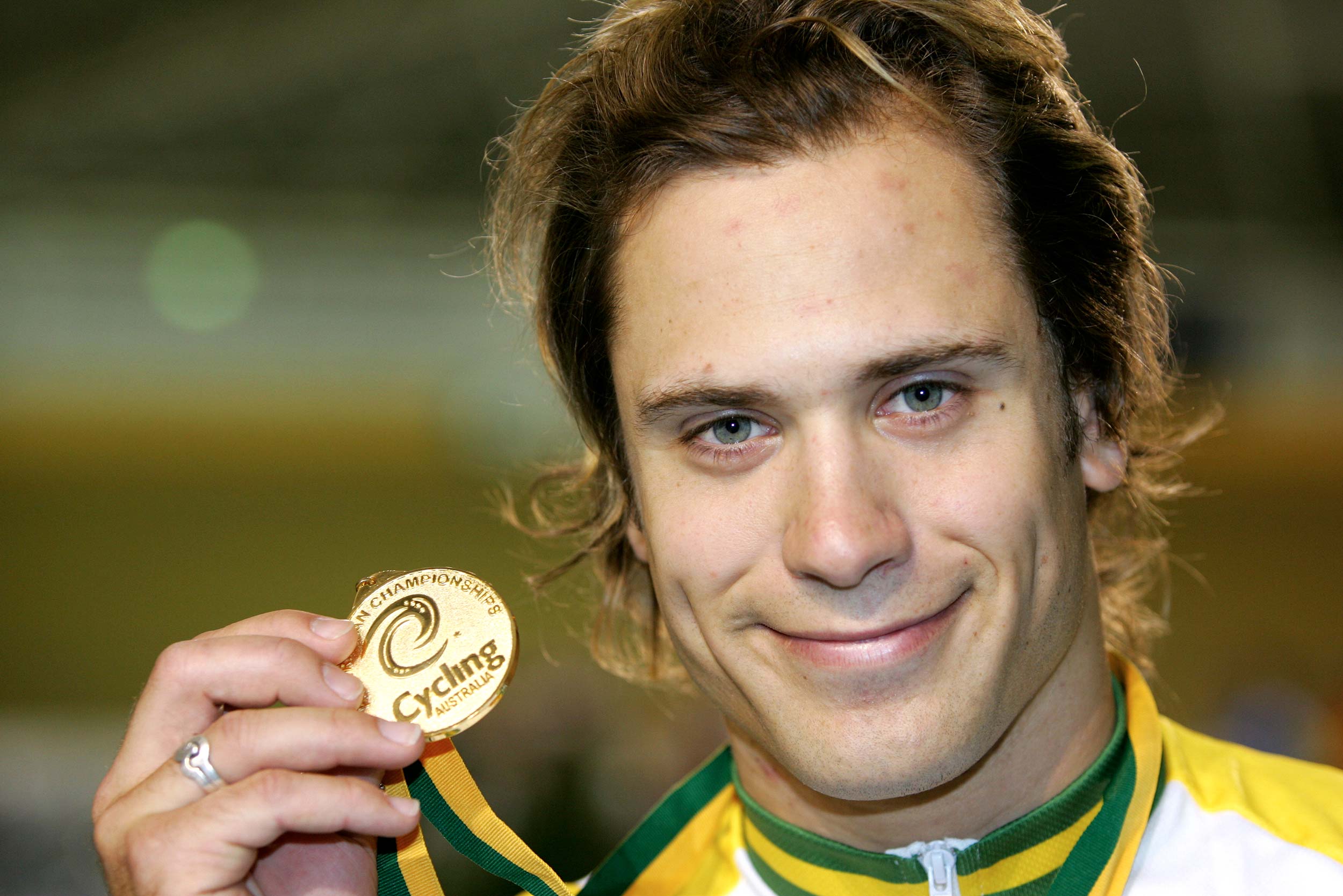 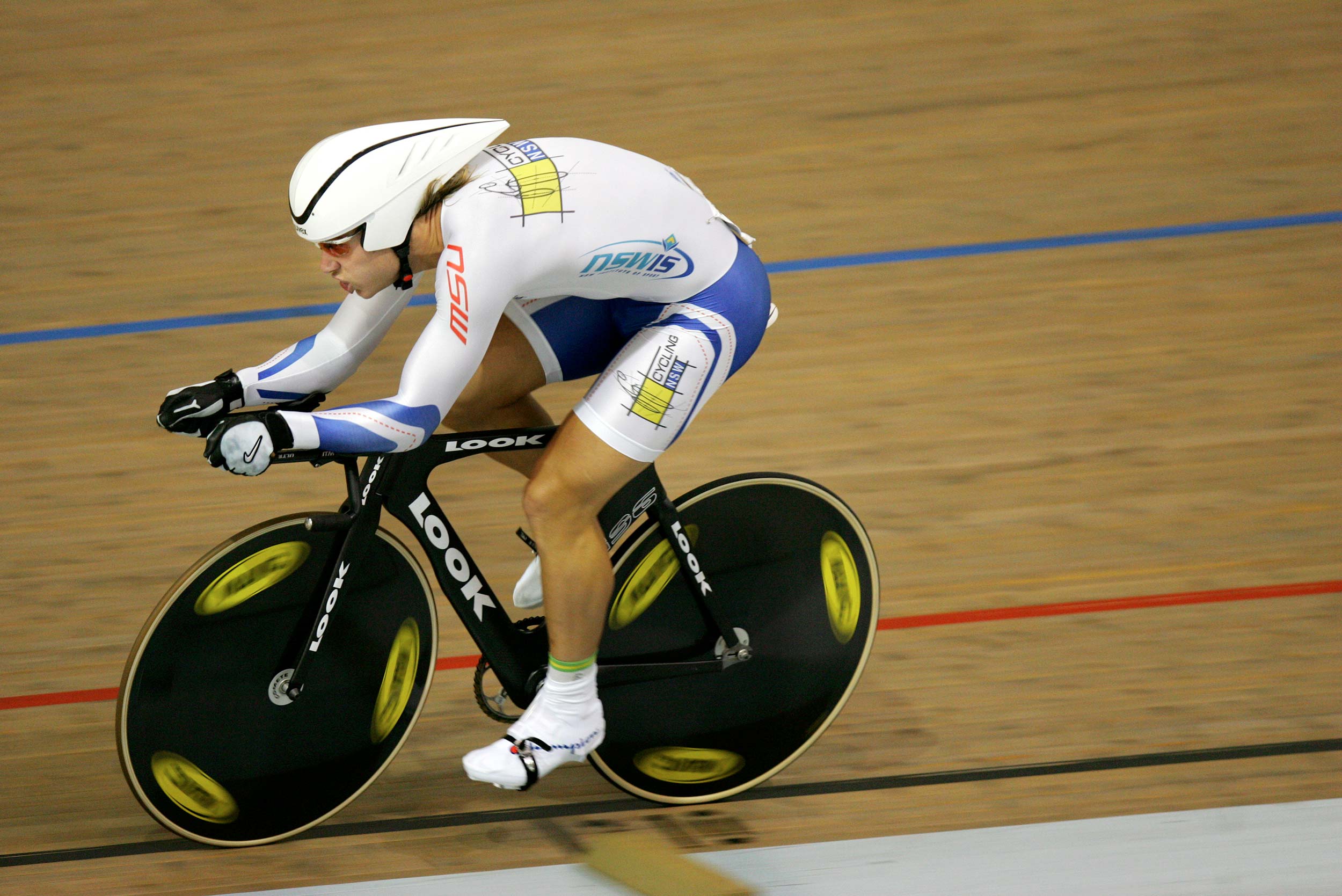 Ben Kersten would enjoy plenty of success in 2006, including a gold medal in his pet event, the ‘kilo’ at the Commonwealth Games later in the year. At the nationals, he won the kilo, sprint and keirin! 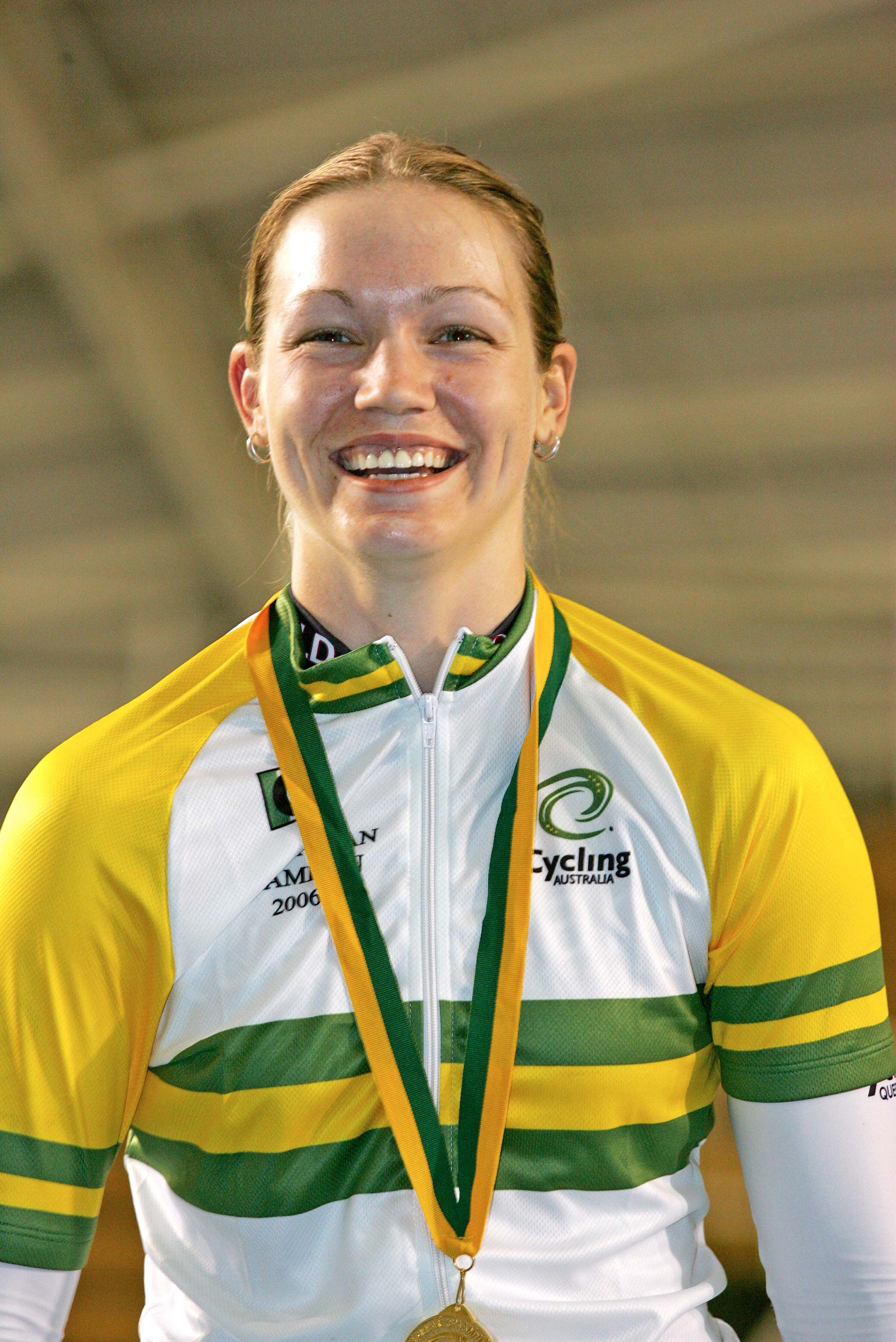 Kerrie Meares, winner of the keirin at the 2006 nationals (ahead of her sister, Anna). In the sprint, the positions were reversed: Anna was the winner, Kerrie was runner-up. 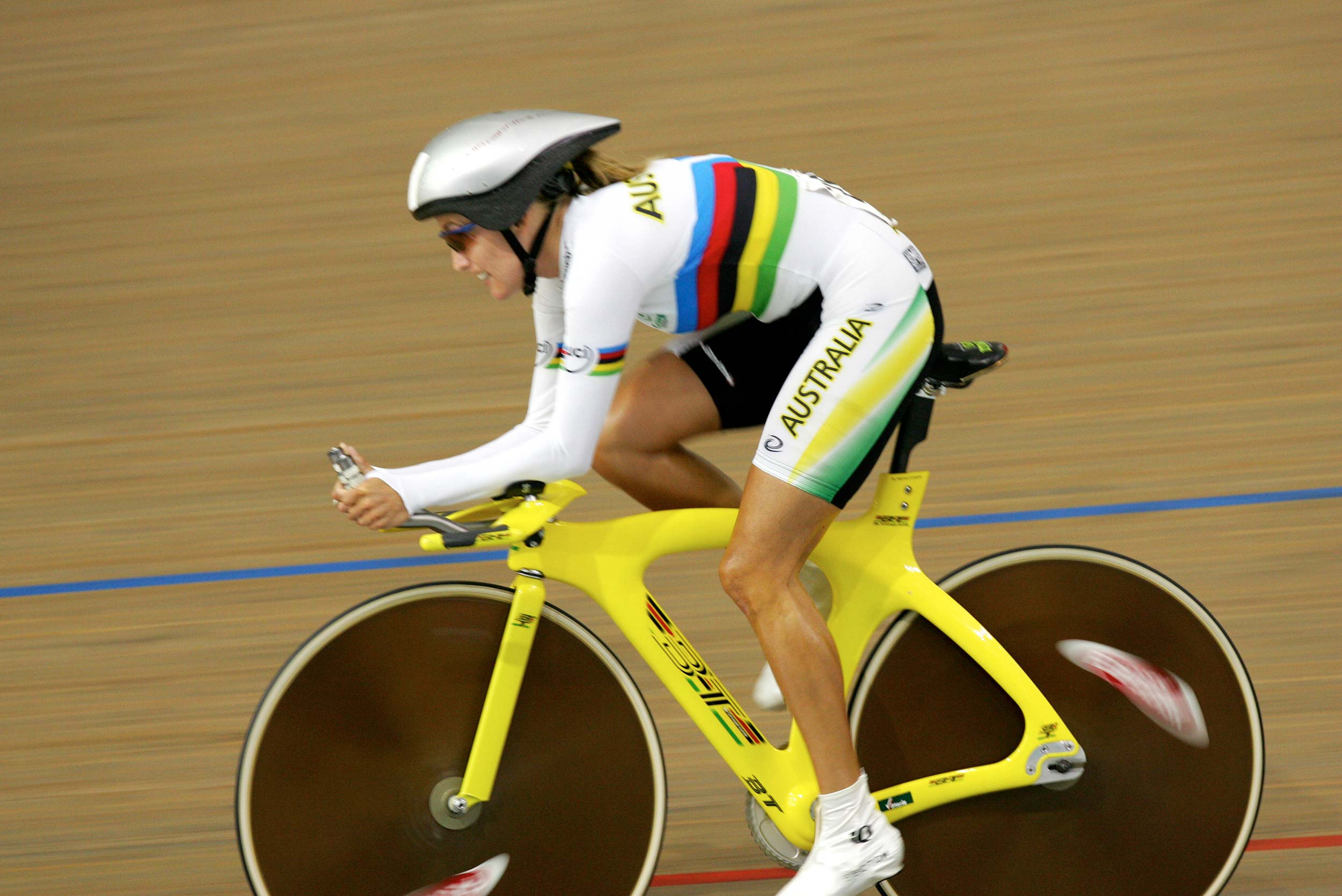 Katie Mactier, world champion in the IP… national champion too. And, later in 2006, she’d also win the individual pursuit at the Commonwealth Games. 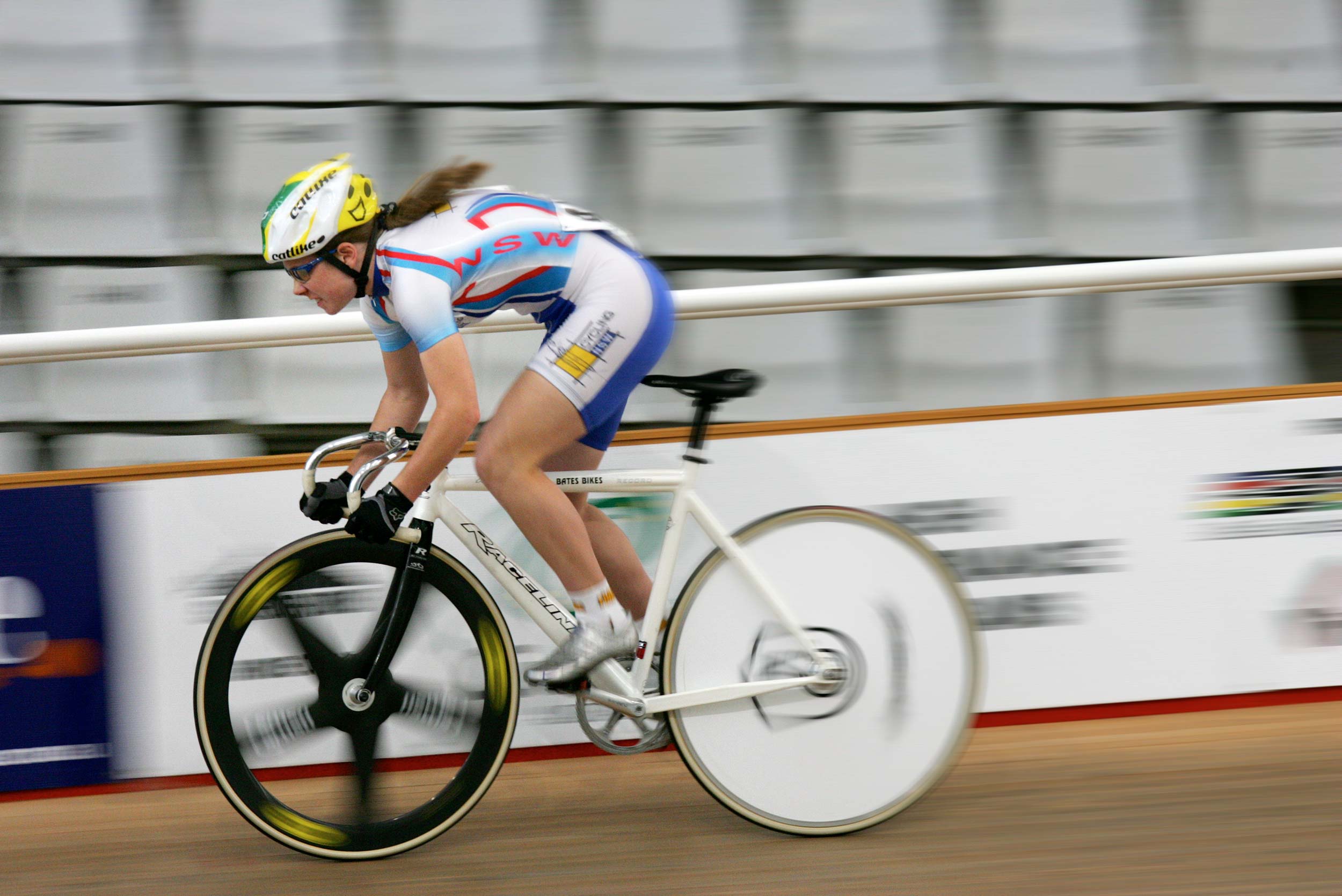 Kaarle McCulloch… representing NSW in the sprint events in 2006 – and still racing for Australia in 2020. 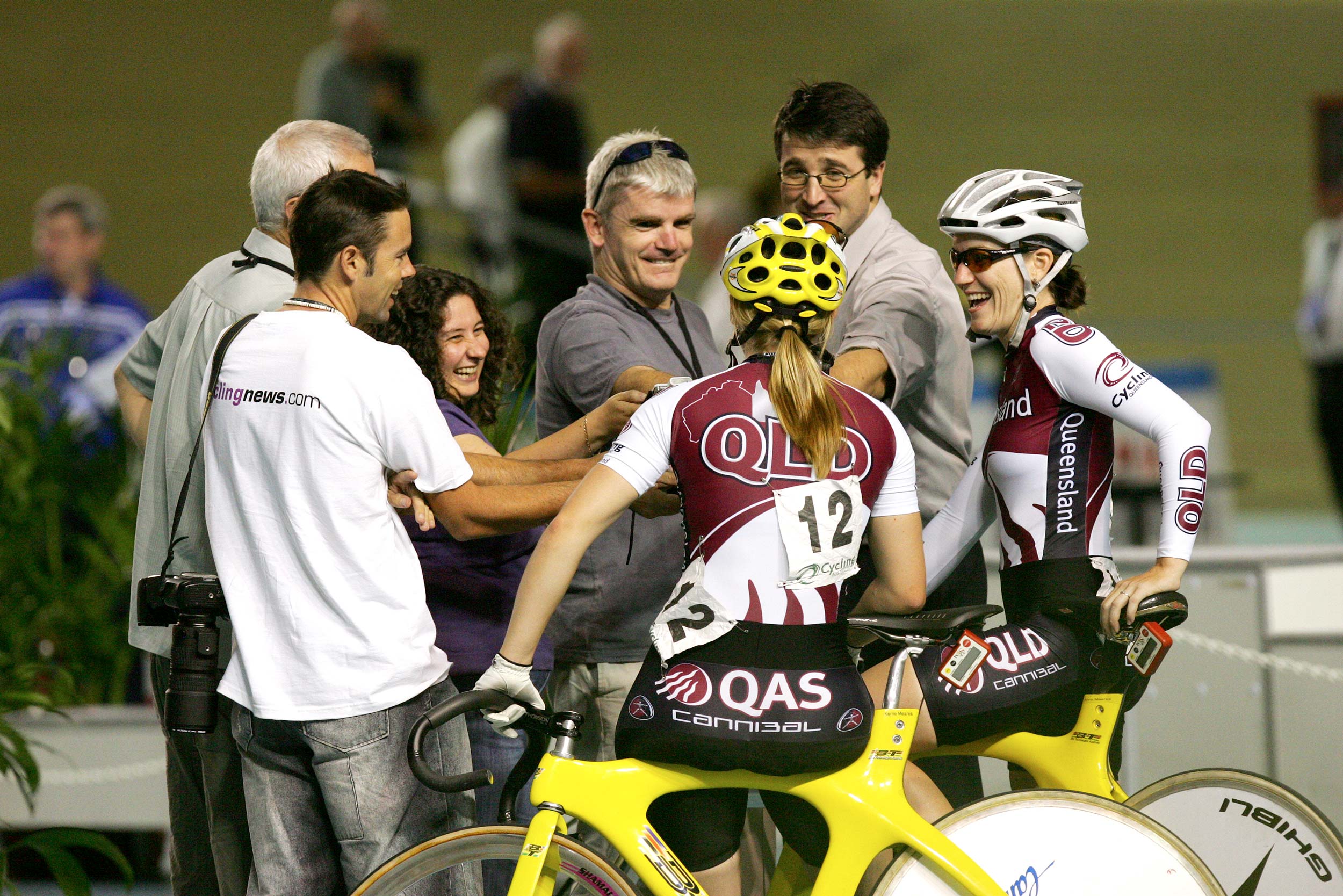 AAP’s Roger Vaughan is all smiles as he joins others from the media in an interview with the Meares sisters, Kerrie and Anna. 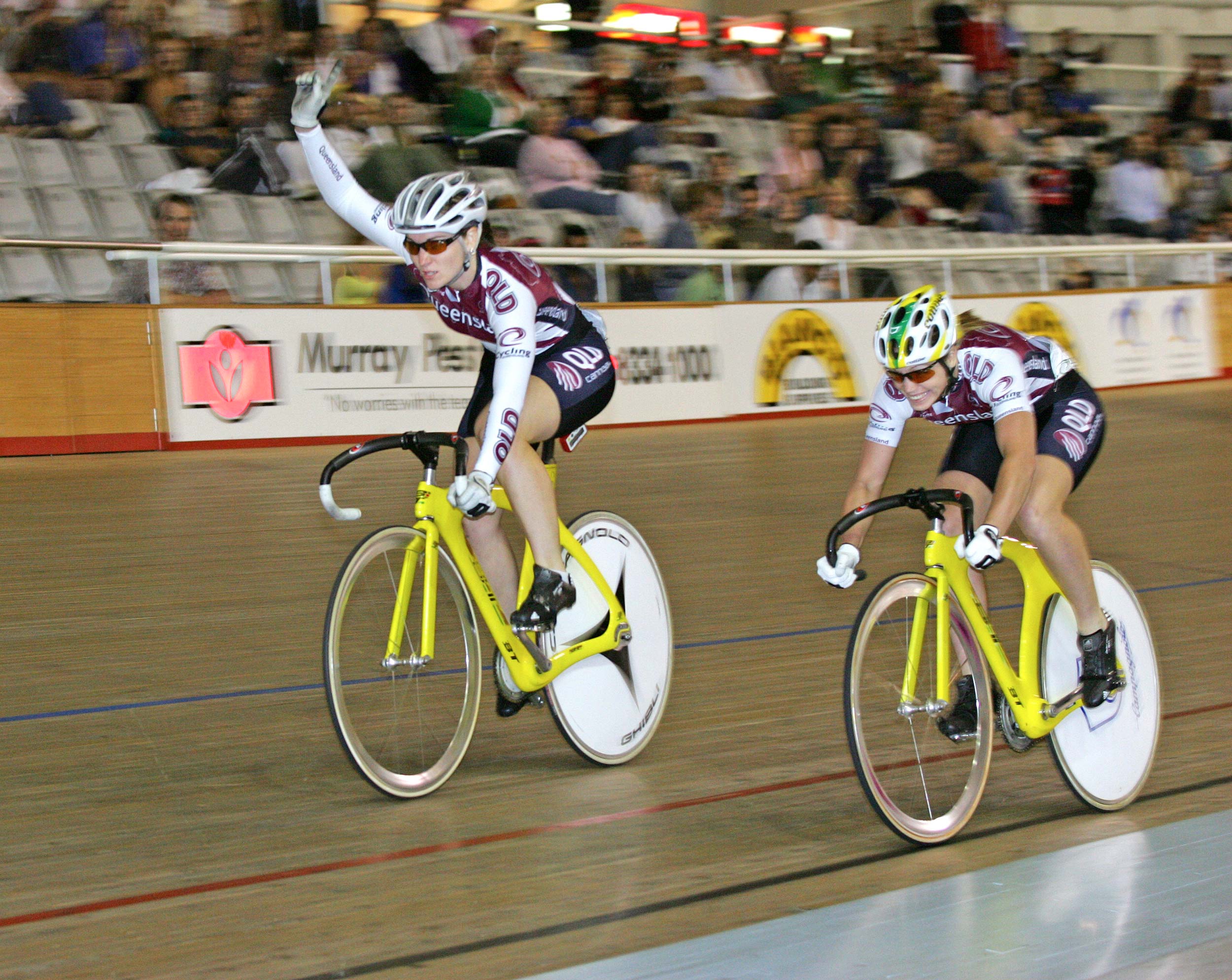 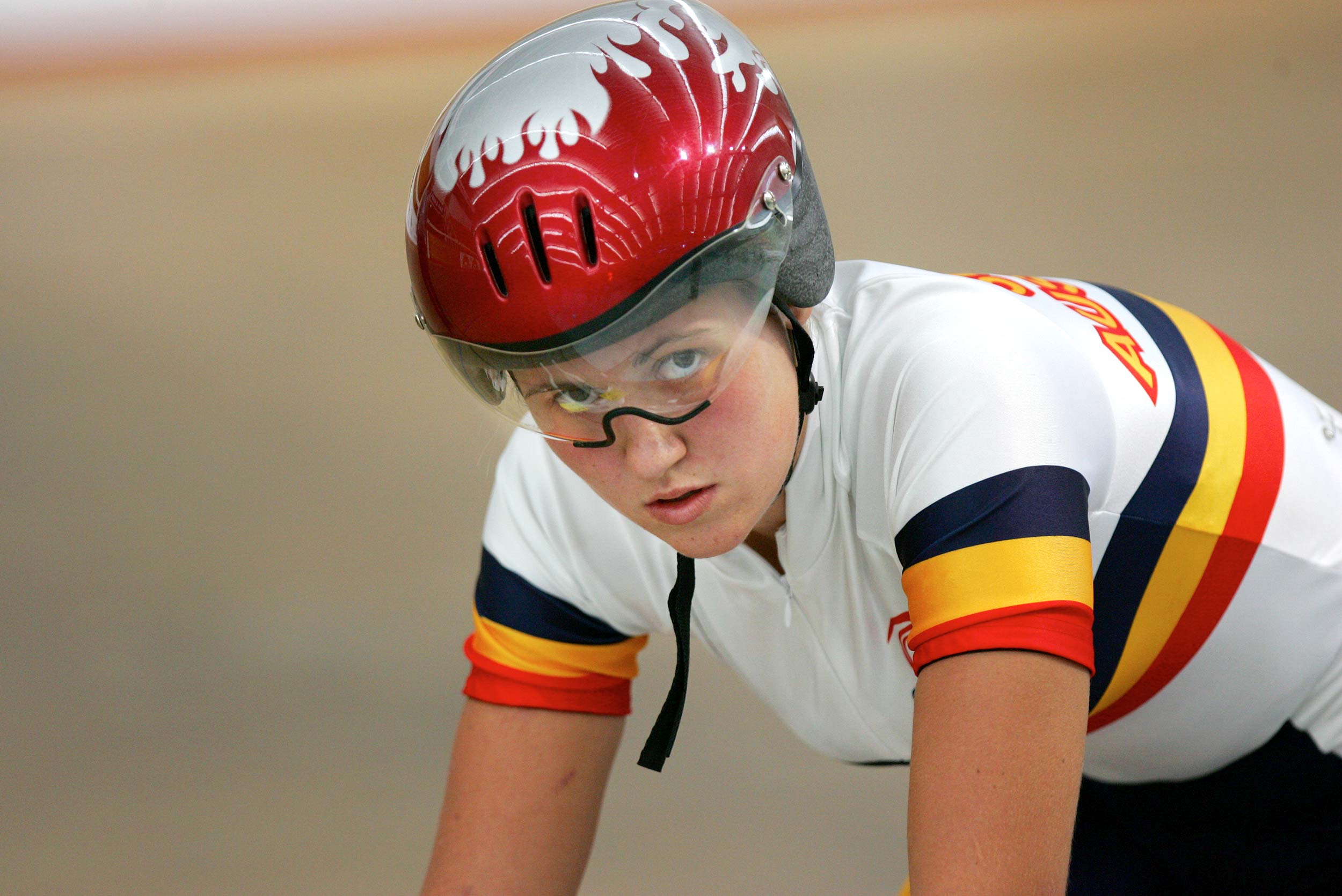 Alexis Rhodes, remarkably back in competition in 2006 after having been involved in the same accident that claimed the life of Amy Gillett around seven months earlier. Alexis finished third in the points race and IP. 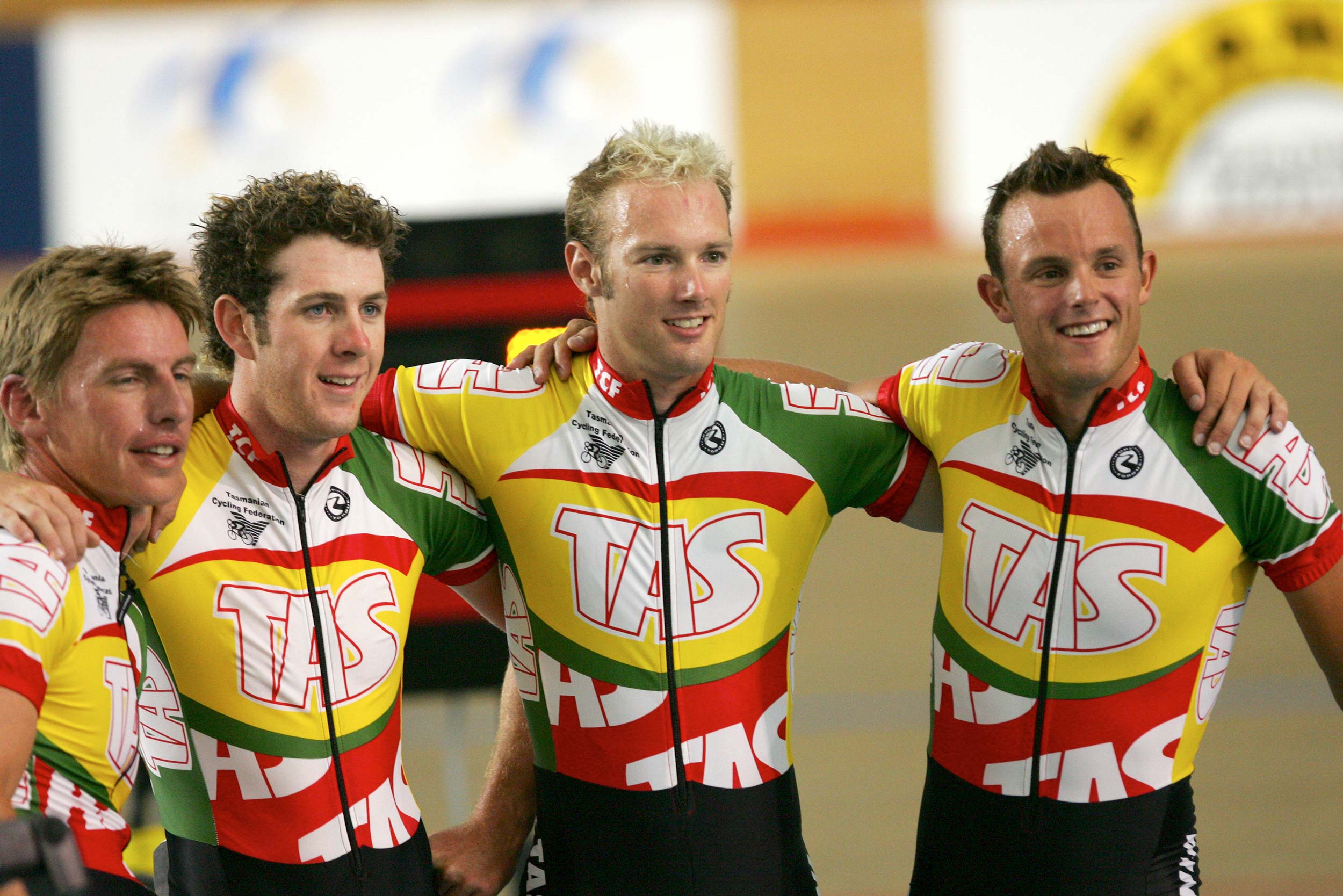 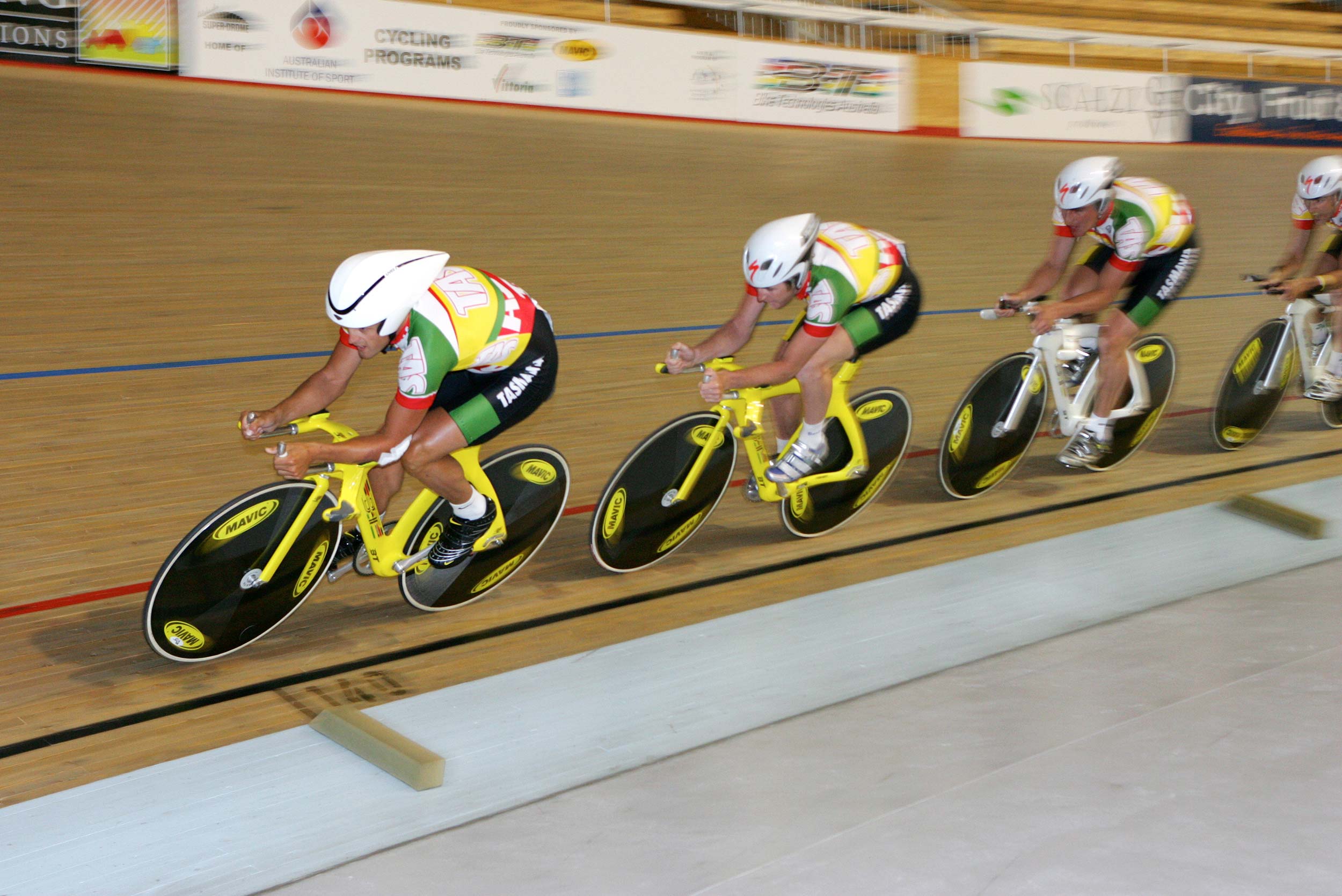 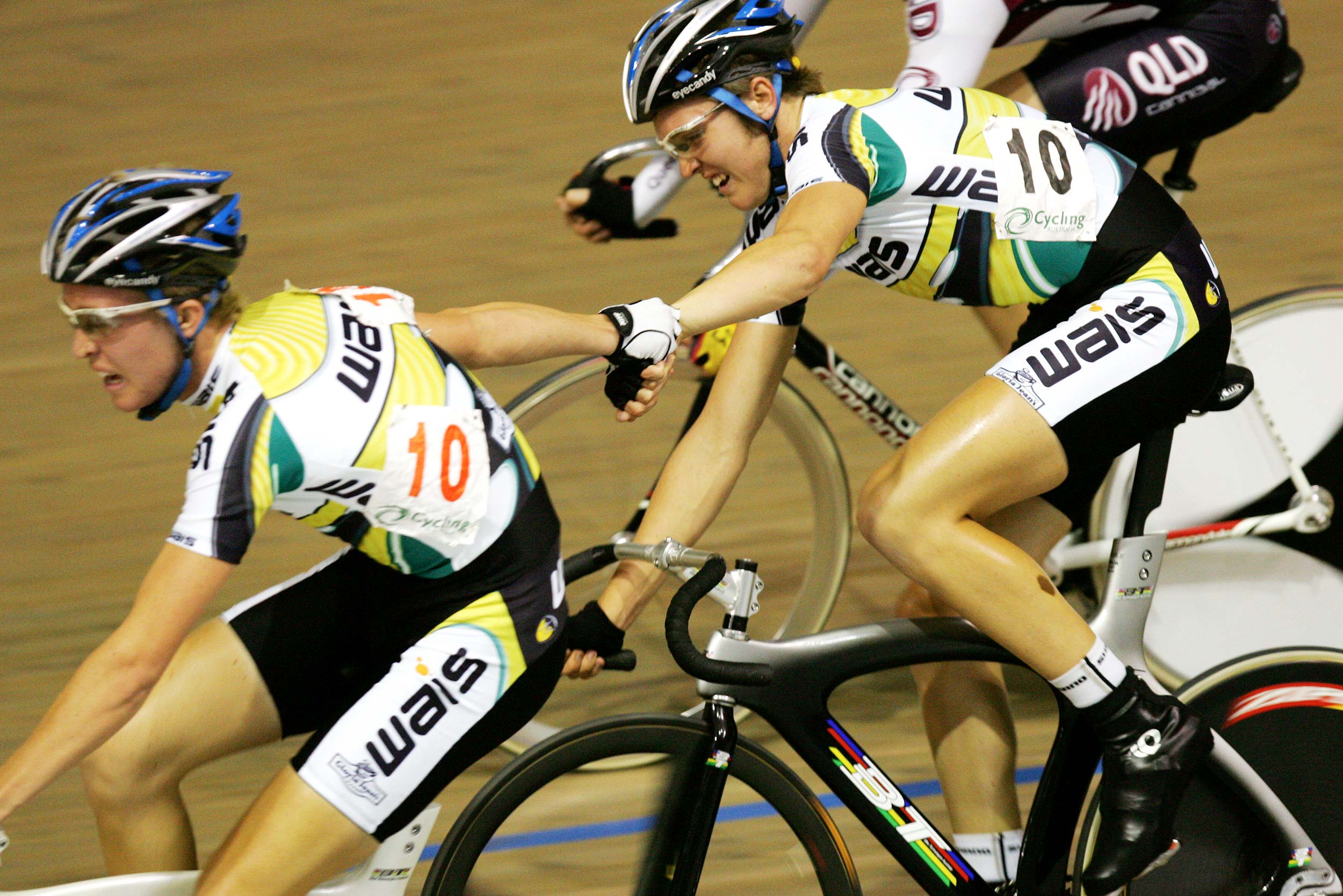 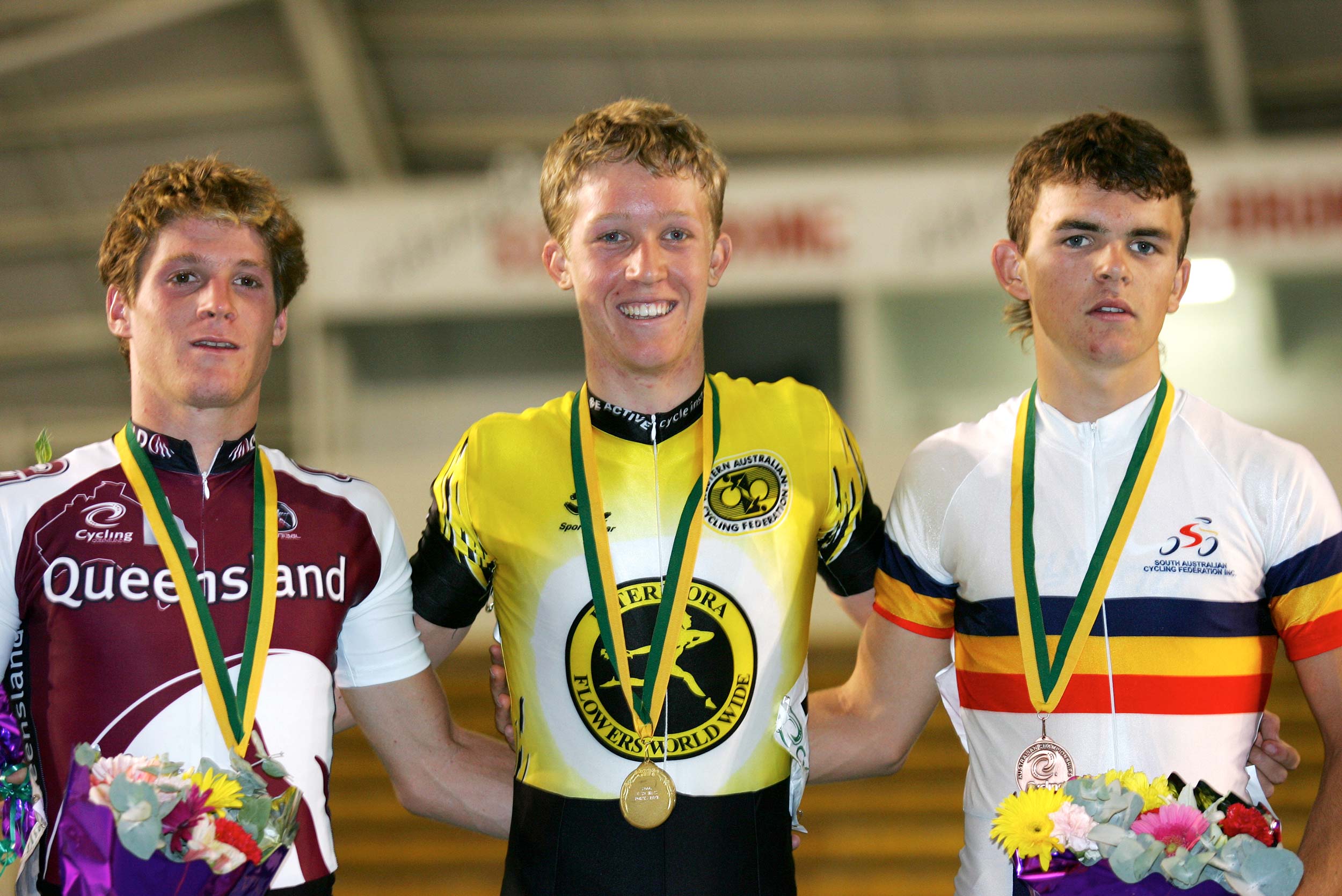 Cameron Meyer won four gold medals at the nationals as an under-19 rider in 2006: IP, TP, Madison and points race (pictured) with Jack Bobridge also making a podium appearance. 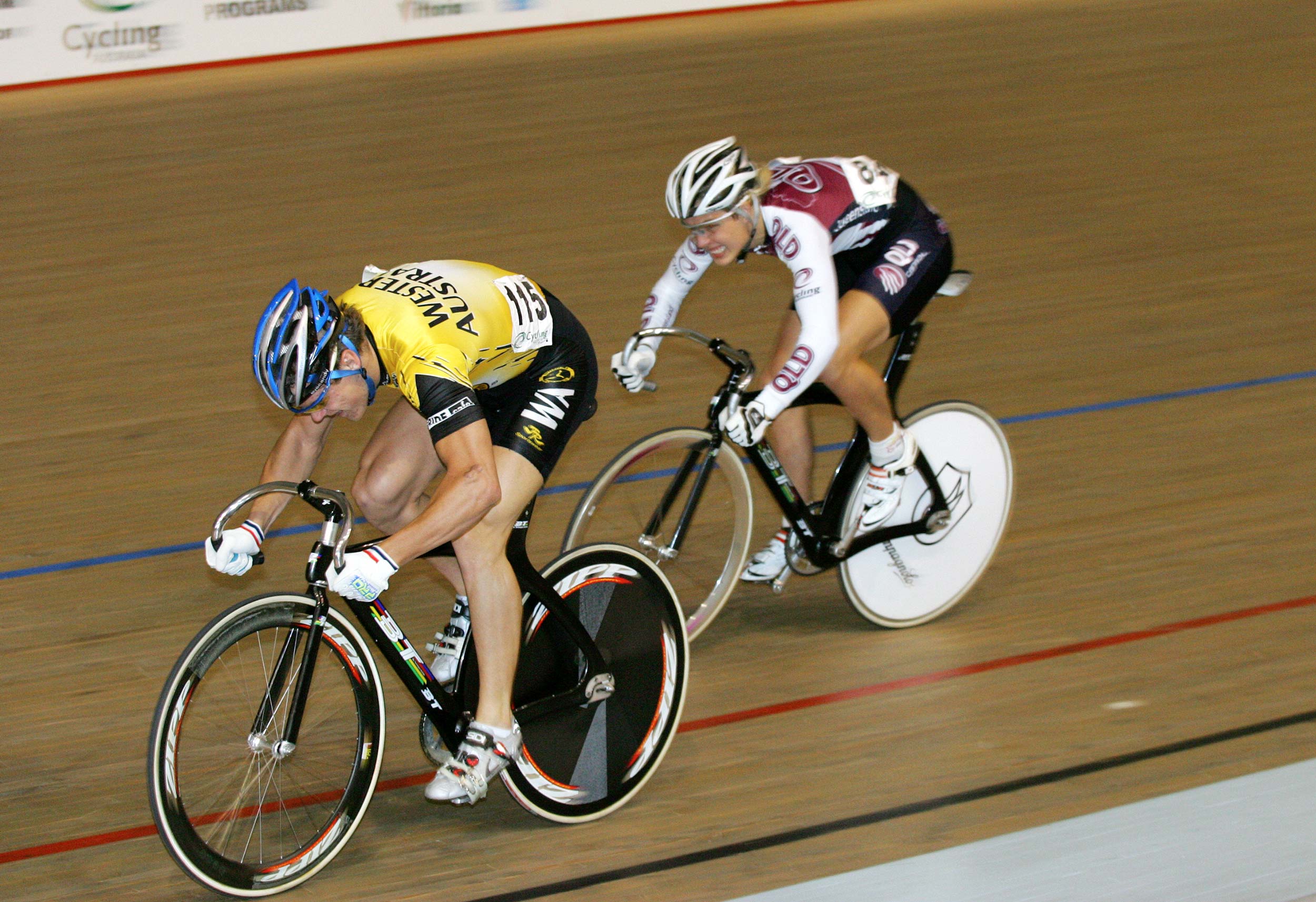 Ryan Bayley, a sprinter with short socks… and short knicks… and plenty of power! 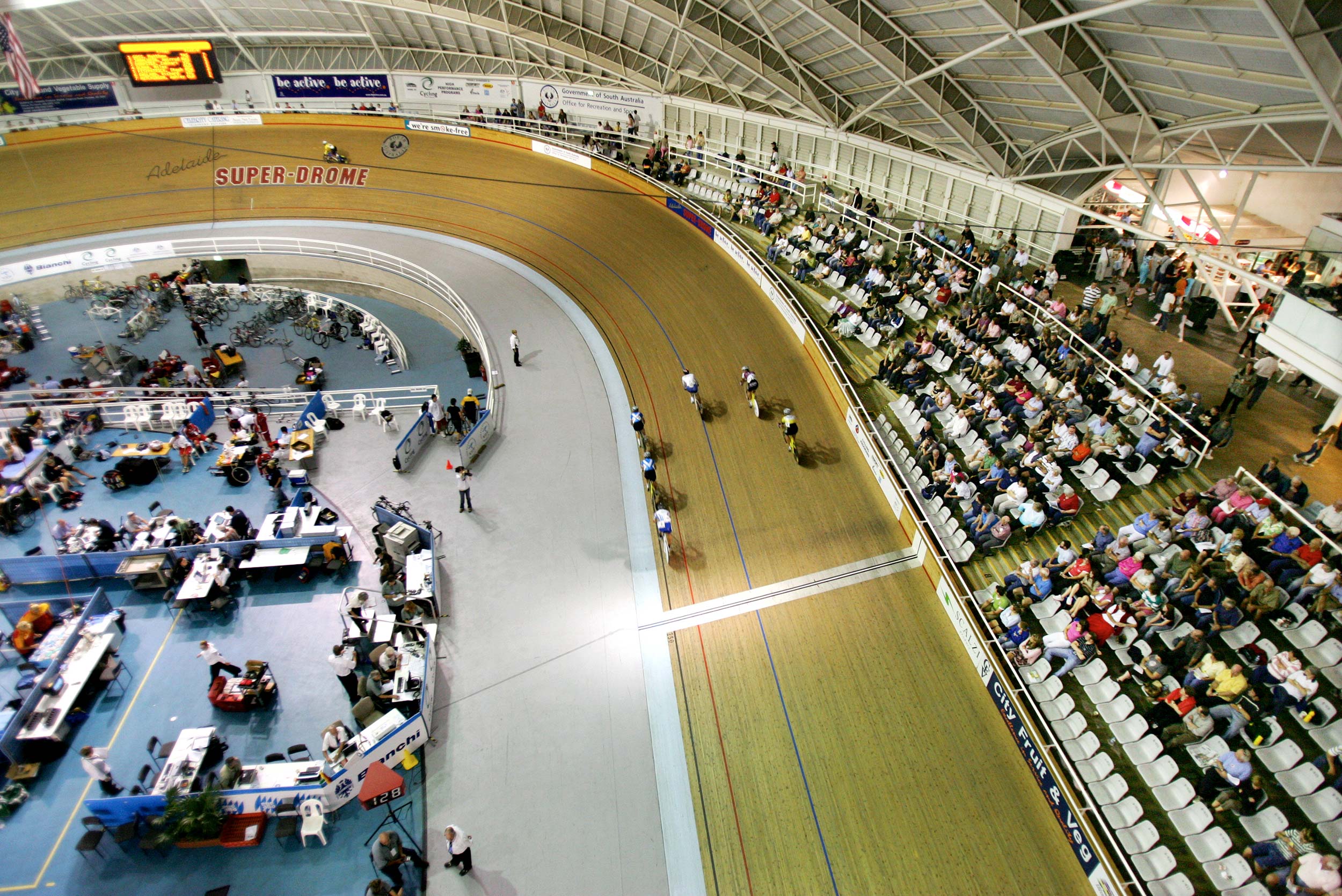 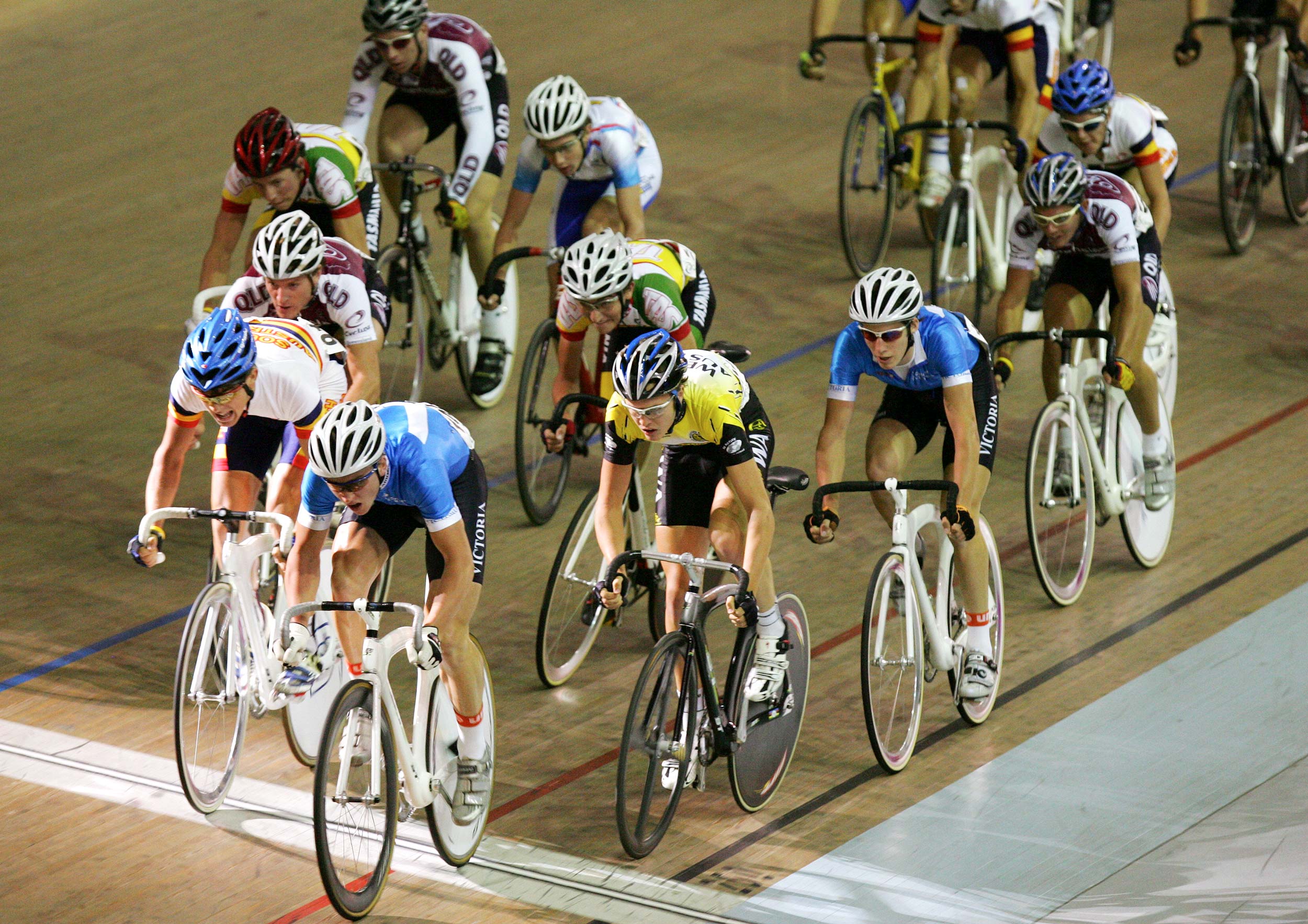 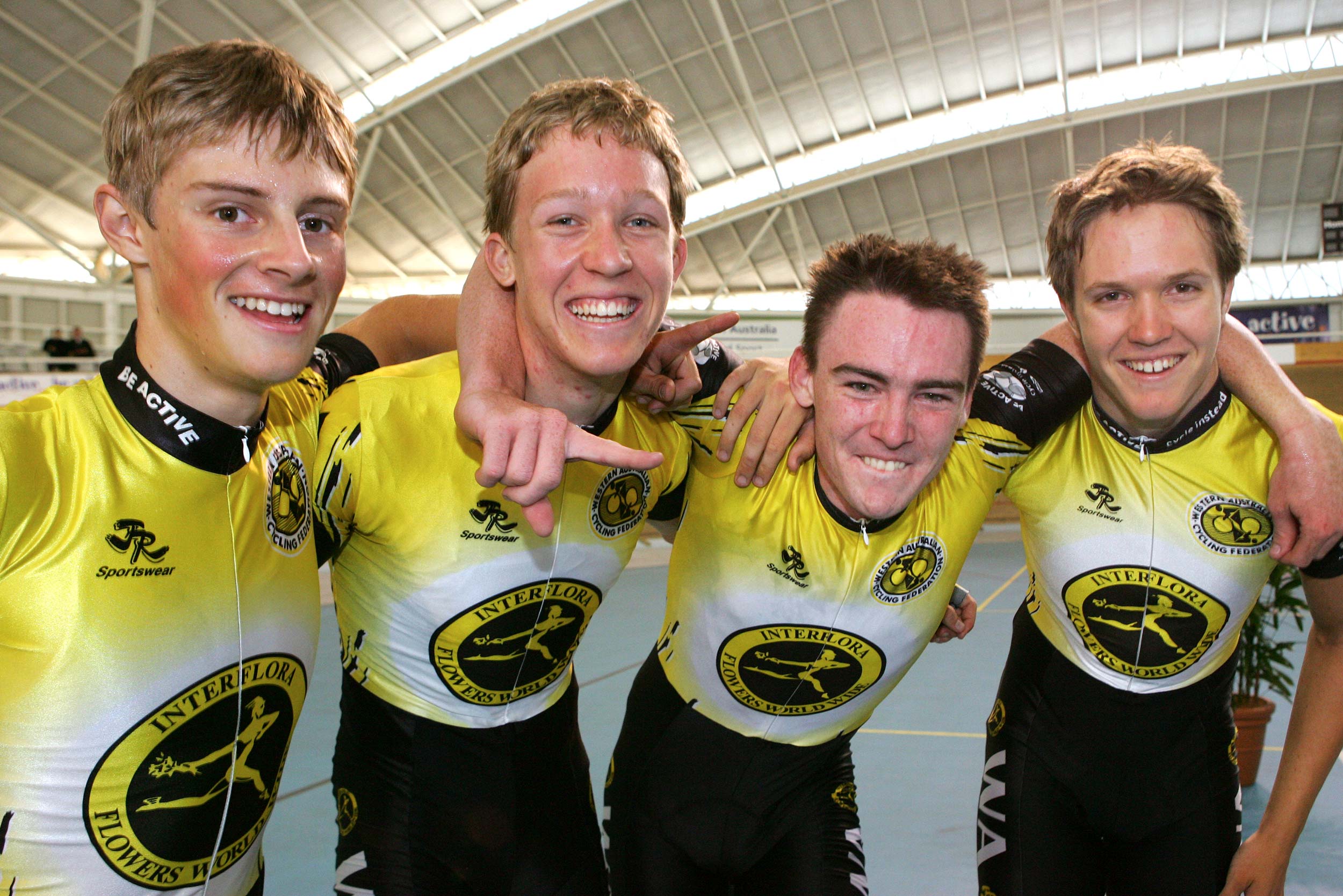 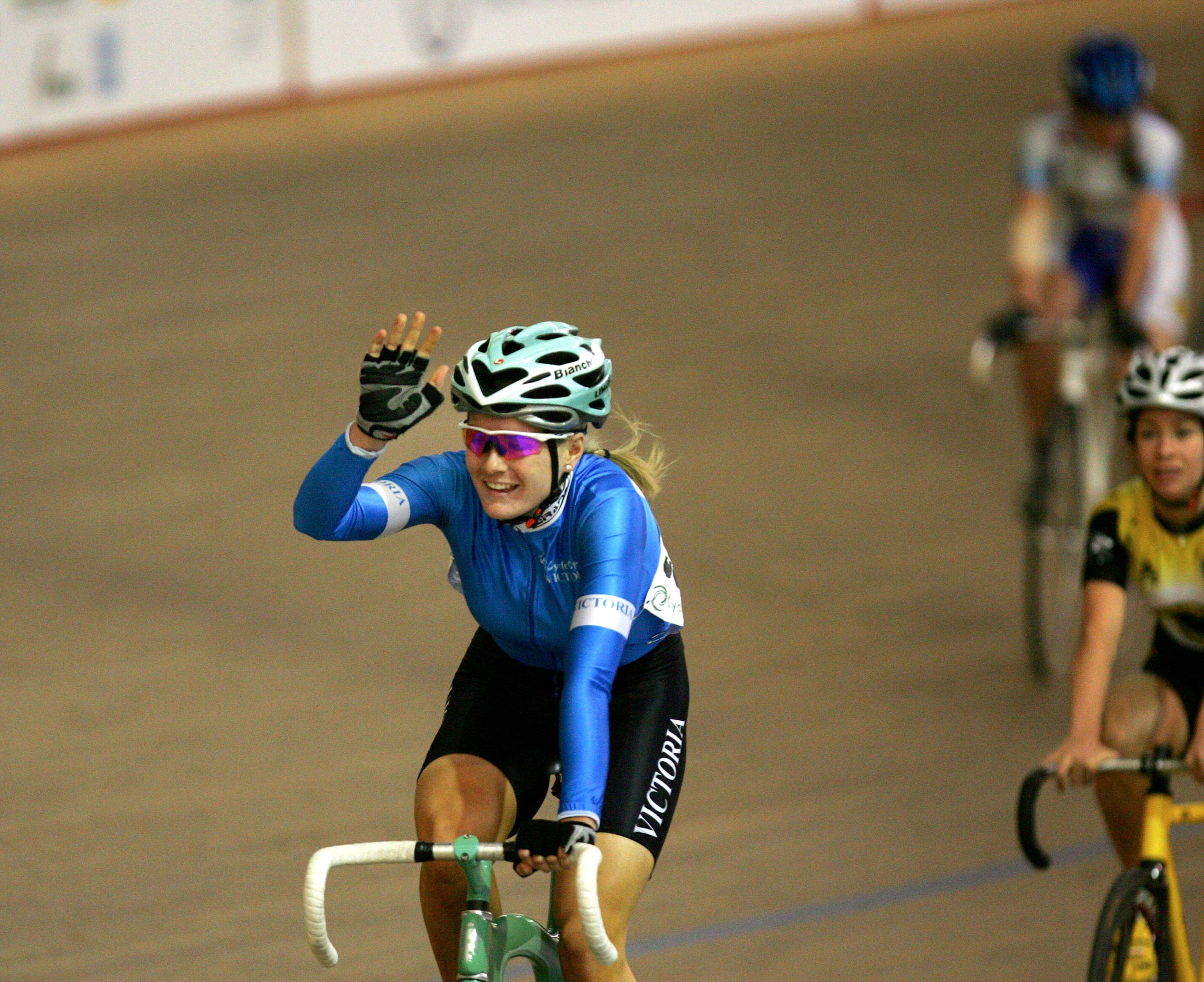 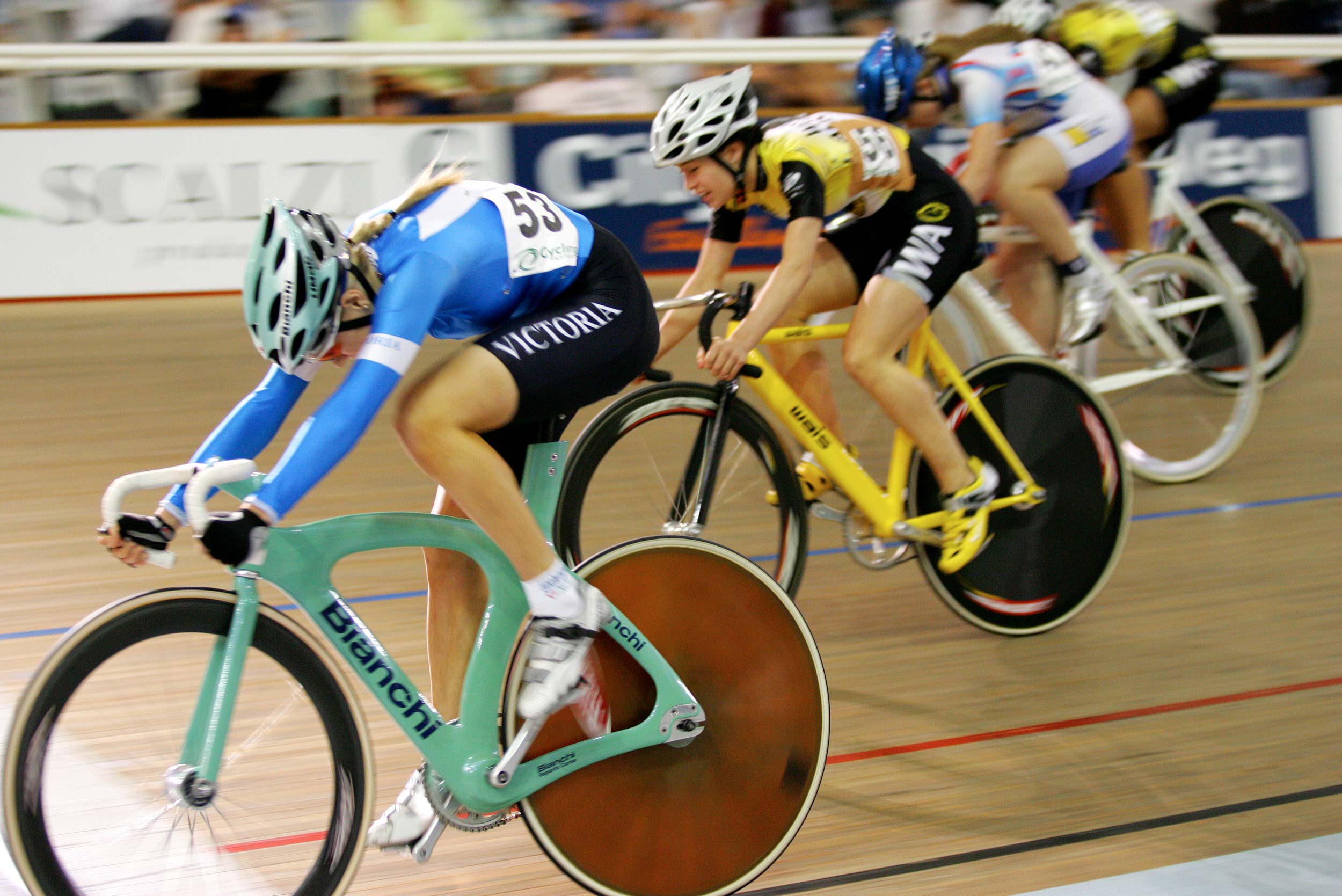 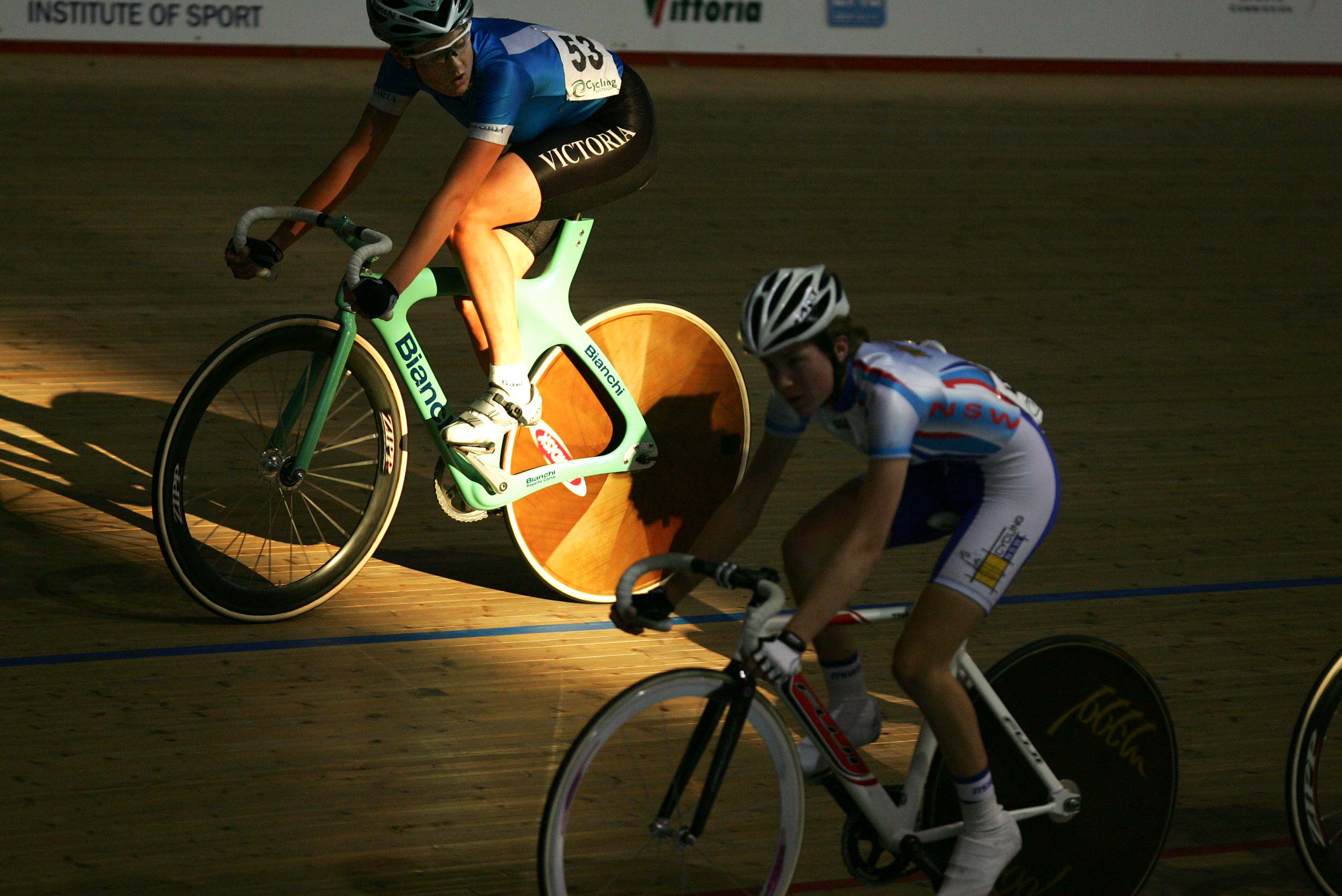