Wollongong, are you ready for the road cycling worlds? #Wollongong2022

Australian sports fans, are you ready for the worlds? If all goes according to plan, Wollongong will be the centre of the cycling universe for eight days in September 2022. After the spectacle in Flanders last week, it’ll be a challenge to equal the Belgian enthusiasm – but next year’s road cycling world championships hold huge promise. 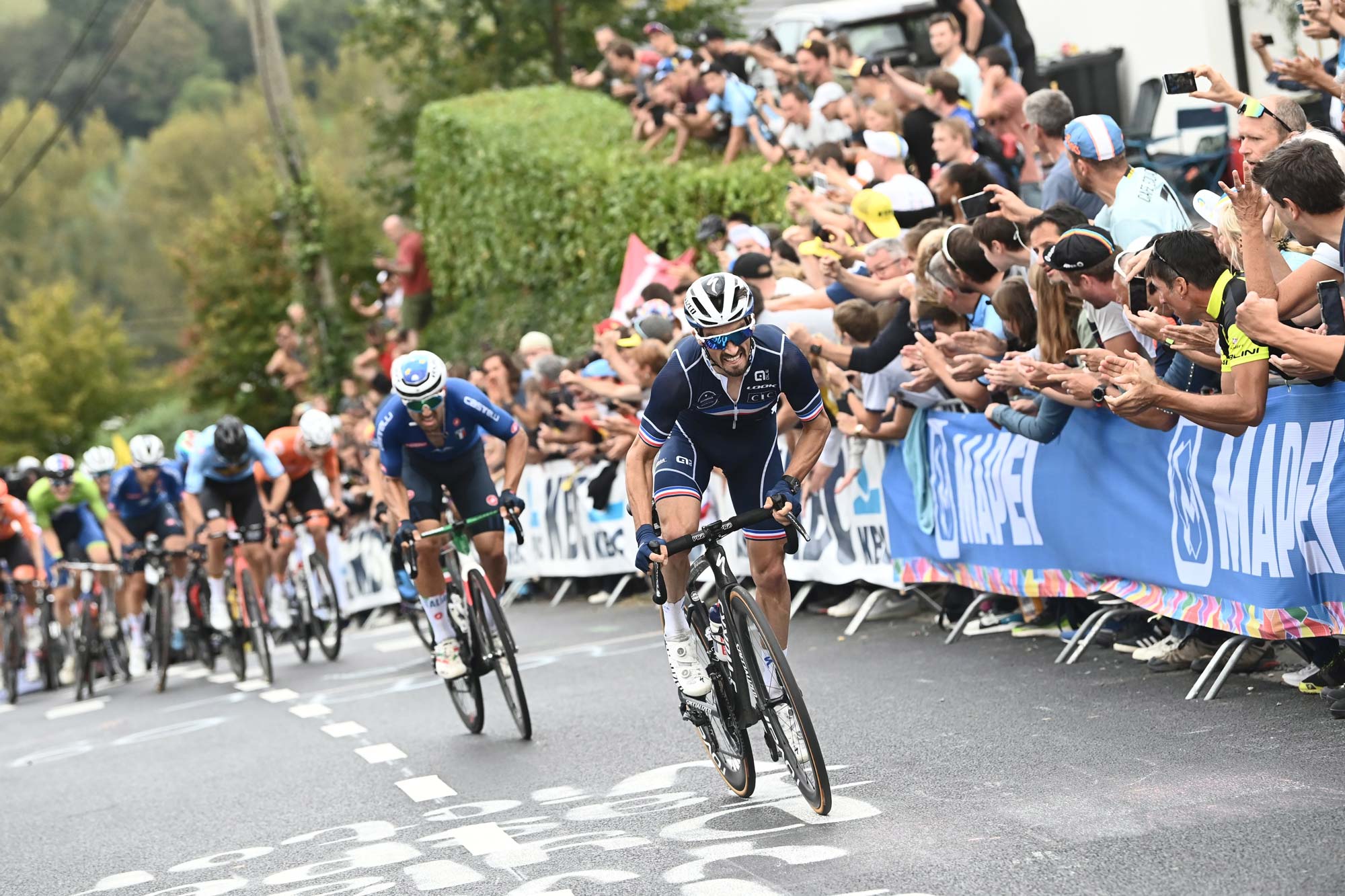 Did you sit up late last night and watch the tellie? Did you get goosebumps as the peloton raced around Flanders for almost six hours, sending huge crowds into raptures? Did you hear the wave of noise and shouts of “Wout! Wout! WOUT!” Did you feel the buzz that bike racing can conjure?

It has been all on display on the TV screen for the last week. The UCI road cycling world championships, beamed into our living rooms via SBS, provided a showcase of our sport. And the Flemish fans turned a complicated 268.5km course into a cauldron of sound, putting on a display that would be hard for any other nation to match.

Australians are proud sports fans, and in September 2022 they’ll get a chance to see if they can equal the gusto that was on display in Flanders overnight. 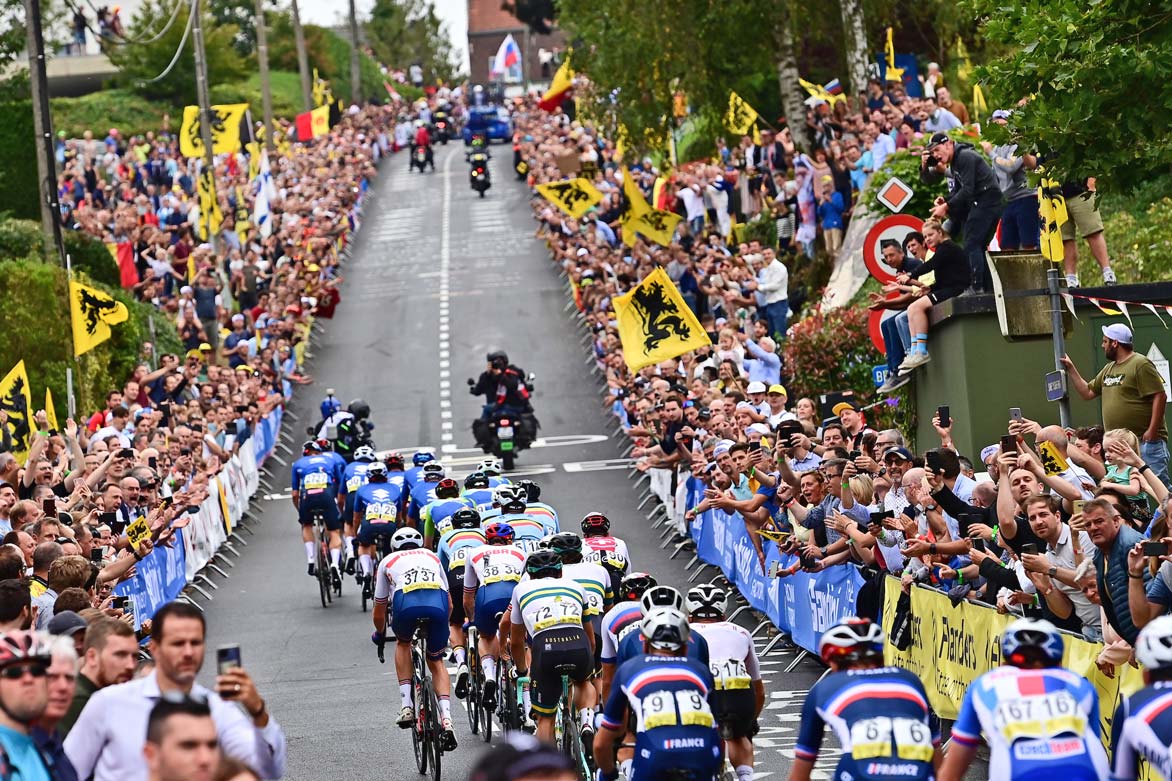 Of course, a key factor in this unofficial competition – to see if Aussies can create an atmosphere even close to what the Flemish conjured overnight – will relate to travel limitations being lifted, vaccination goals being achieved, and the general influence of the pandemic abating. Still, if we look to Geelong in 2010, we know that Australian cycling fans do most certainly add to the drama and tension of an event like the worlds.

The routes for the time trials and road races in Wollongong are yet to be revealed but anyone who knows the region would relish the opportunity to map out a course that takes in challenging climbs and gorgeous vistas to showcase a city that is committed to cycling. This part of NSW is indeed a haven for riding and, all going well, we’ll be seeing a lot more of ‘The Gong’ in the coming months.

For eight days, from 18 to 25 September 2022, Wollongong will be the focus of the cycling world. That’s the plan. And although many good events have been scuppered during the COVID era, there’s hope on the horizon and The Gong lies in wait for the next worlds.

September is footy finals time in Australia and the influence of this was felt when Geelong hosted the road cycling worlds in 2010. A drawn AFL grand final the week before the championships meant the Saturday of the road races – when Giorgia Bronzini beat Marianne Vos in the sprint for gold – was impacted. Media resources were moved from Geelong to Melbourne and the MCG, and the majority of TV viewers were more committed to the Collingwood-vs-St Kilda rematch than the Italy-vs-Netherlands showdown on Moorabool St, Geelong.

Still, we know that Australia is up to the challenge of putting on a good show and welcoming the world to our shores. Geelong conjured a carnival atmosphere and although – in late-September, early-October 2010 – there was a degree of negativity around cycling there was also plenty of festivity.

In the days leading up to the worlds of 2010, news emerged that Alberto Contador – that year’s recently crowned Tour de France champion – had failed a doping control on the second rest day of the race in July. Once again, doping headlines replaced feel-good commentary and cycling suffered another setback.

Still, when it was race time, fans responded with the kind of enthusiasm that reminds us of how special cycling can be. The closing laps of the men’s road race created a tension that few could have imagined. With the defending champion, Cadel Evans, on the attack and future world champion, Philippe Gilbert, also animating the action, we saw a classic contest – one for the ages. Australia vs Belgium in a compelling competition.

Ultimately, it was Thor Hushovd who sped across the finish line first on Moorabool Street, with Matti Brechel from Denmark in second and ‘our’ Allan Davis in third place.

What a race! What a time for cycling in Australia. What a memory!

Can it happen again? Let’s hope so. The pandemic has changed how we watch sport, but the pictures from Belgium overnight show that it’s possible to cheer again, around strangers and in huge crowds… with vigour and passion.

Wout wasn’t able to live up to the lofty hopes of the expectant crowd, Van Aert – we would learn last night – was indeed human. He is a freak but he was beaten in fine style by a Frenchman who defines the notion of panache. 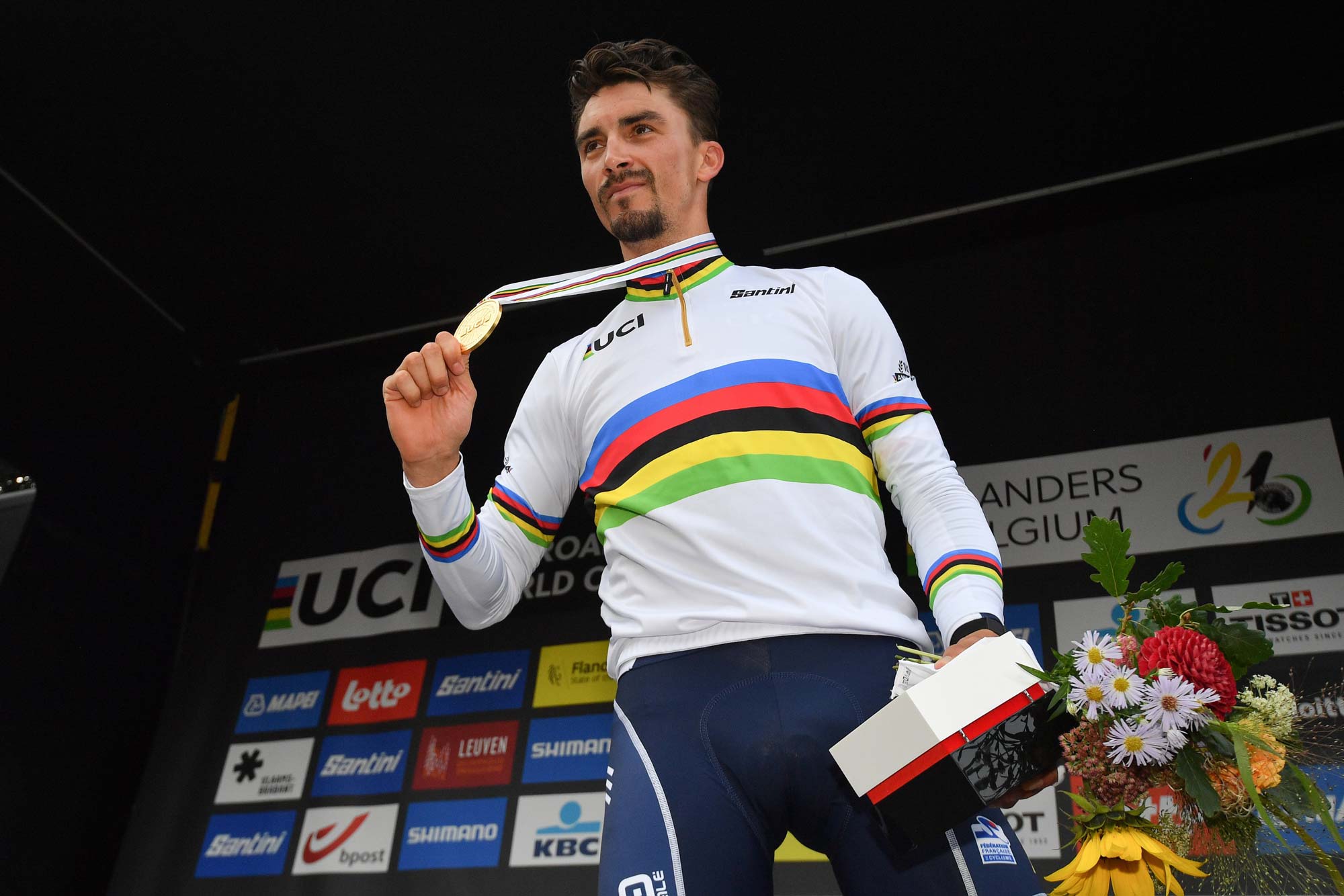 Julian Alaphilippe will wear the rainbow stripes for another 12 months. Once again, we can expect him to continue demonstrating what a fitting world champion he is; the Frenchman rides with conviction and emotion that would surely thrill fans from France, but his talents extend beyond borders. There is a universal appeal created by Alaphilippe’s love of racing, of challenging his rivals, of extracting every last ounce of energy from himself. Quite simply, he makes bike racing exciting.

Wout didn’t win. The dream of Flemish fans didn’t eventuate, but the championships last week did provide a showcase of cycling with a dramatic finale that reminded us what a sporting event can do. It can unite us and excite us, even when we’re a world away and limited to watching on our screens. All going well, that won’t be the case next year.

All going well, we’ll be in The Gong in September 2022, turning roads into stadiums and creating the kind of atmosphere that transcends parochialism. It doesn’t matter where the winner is from when the racing is as good as it was in Flanders. What happens in the coming 12 months remains to be seen but let’s hope that Wollongong is ready to show the world what a great place NSW is, and how much Australia loves cycling.