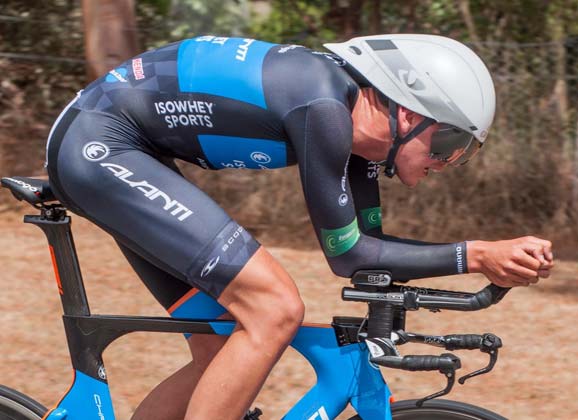 The ‘factory’ continues it’s output of quality riders for cycling’s Big League. Avanti-IsoWhey, the team managed by Andrew Christie-Johnson, traditionally places a few riders per season into WorldTour squads. And 2017 will be no different. Already Chris Hamilton’s move to Giant-Alpecin has been announced but another young Australian talent is also set to ‘graduate’ at the end of the year.

Ben O’Connor spent one season in the colours of Christie-Johnson’s line-up and his rapid development continues.

The 20-year-old will join Team Dimension Data next year and the hope is to turn him from Young Rider With Potential into a true GC Man.

The rider from Perth had a stand-out season with Avanti-IsoWhey. He switched to cycling (from running) only after finishing school and already he’s attracted attention from an international team because of solid results in 2016. 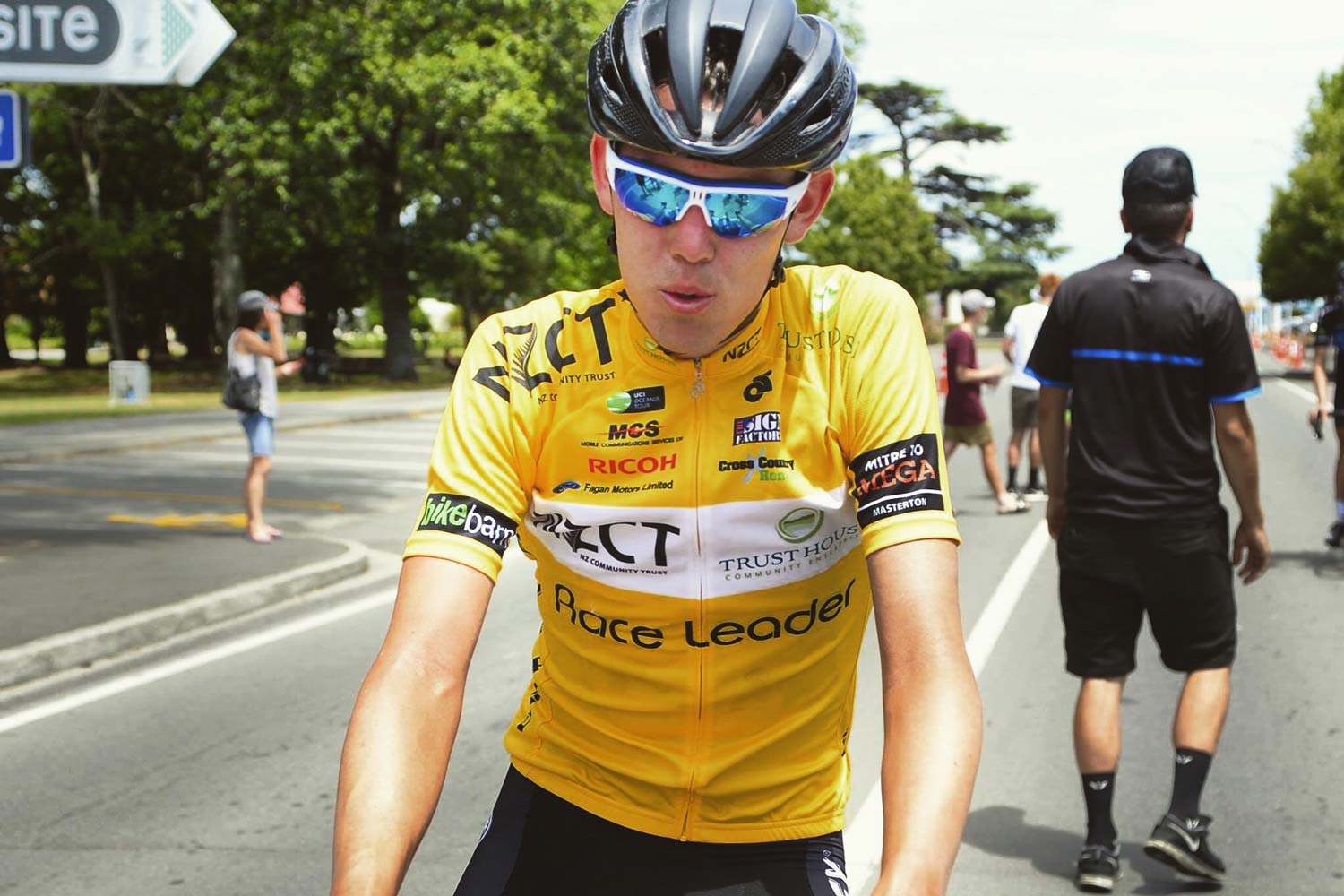 O’Connor spoke to Rob Arnold shortly after the move to Dimension Data was announced.

RIDE: I’m talking with Ben O’Connor and there’s been some big news recently from Team Dimension Data. We’ve got another young Australian going into the WorldTour ranks. Do you want to give us a little bit of detail about how this new contract came about?

Ben O’Connor: “Yeah, sure. I started with Avanti-IsoWhey this year and I managed to get a couple of nice results… the nationals was a good race, especially being able to help Chris (Hamilton) get the win.

“And then as I moved from New Zealand (a win in stage four of the Tour of Wellington and first place overall) and Taiwan (third on GC at the Tour of Taiwan). I managed to just keep those overall results kind of flowing.

“Probably what managed to really help achieve the contract was the podium that I got in the Tour de Savoie in the French Alps (third on GC). I think it was from that race that I probably got the most attention from the team.” 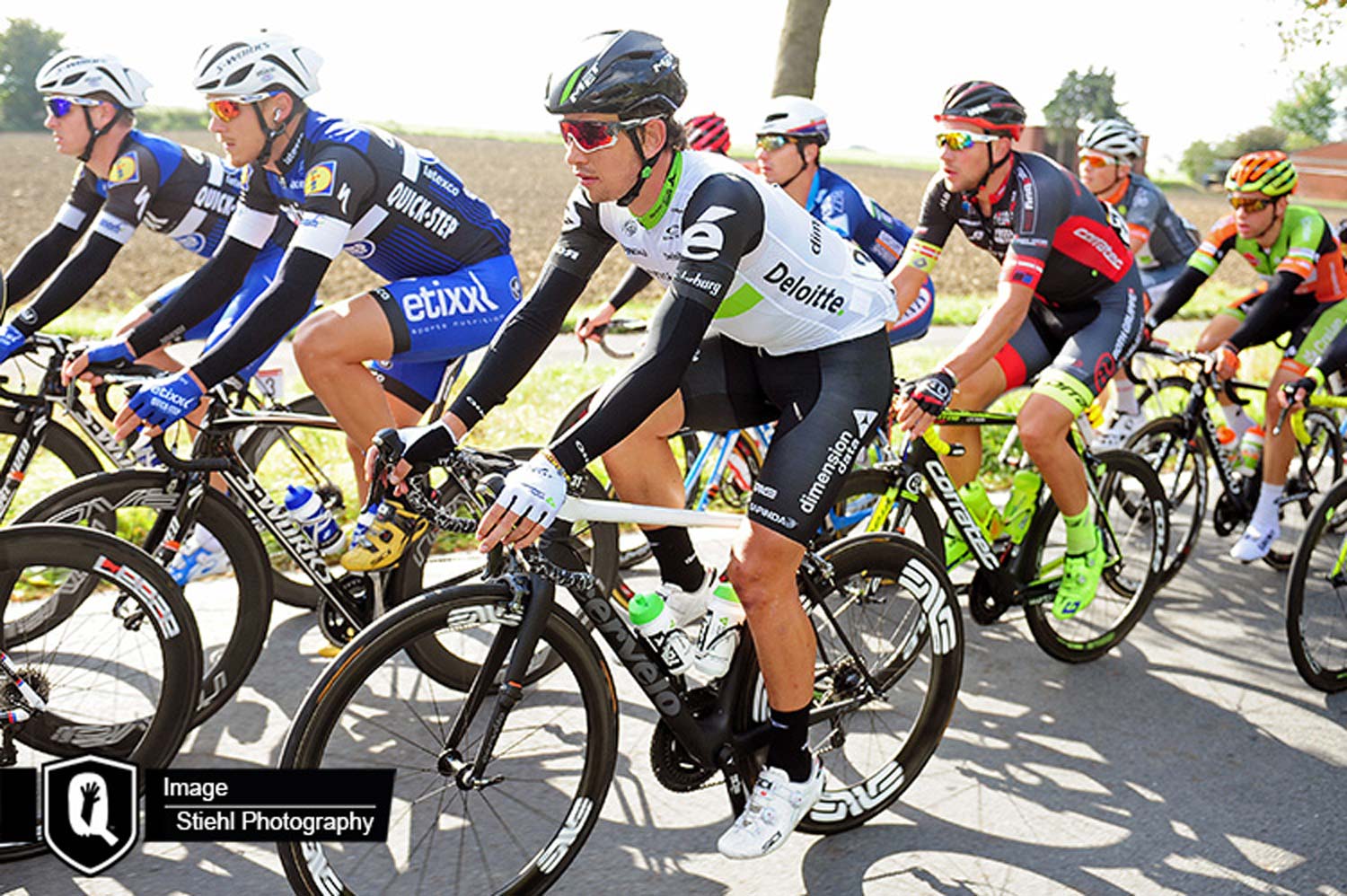 So there’s a whole host of these ‘little’ stage races… like the Tour de Savoie which do indicate good form. If you’ve got good form in that part of the world, it’s fair to say you’re a climber. Let’s go into some of the details of what you’re like as a rider.

“I am a climber. I am quite tall and skinny and I guess that’s what does helps; when you do get over the big climbs, I think the hardest – or the most important kind of aspect – is weight, or getting the weight right.

“It definitely changes the whole perspective on what kind of rider you are.

“It’s those long aerobic efforts that I kind of need – or do well in.” 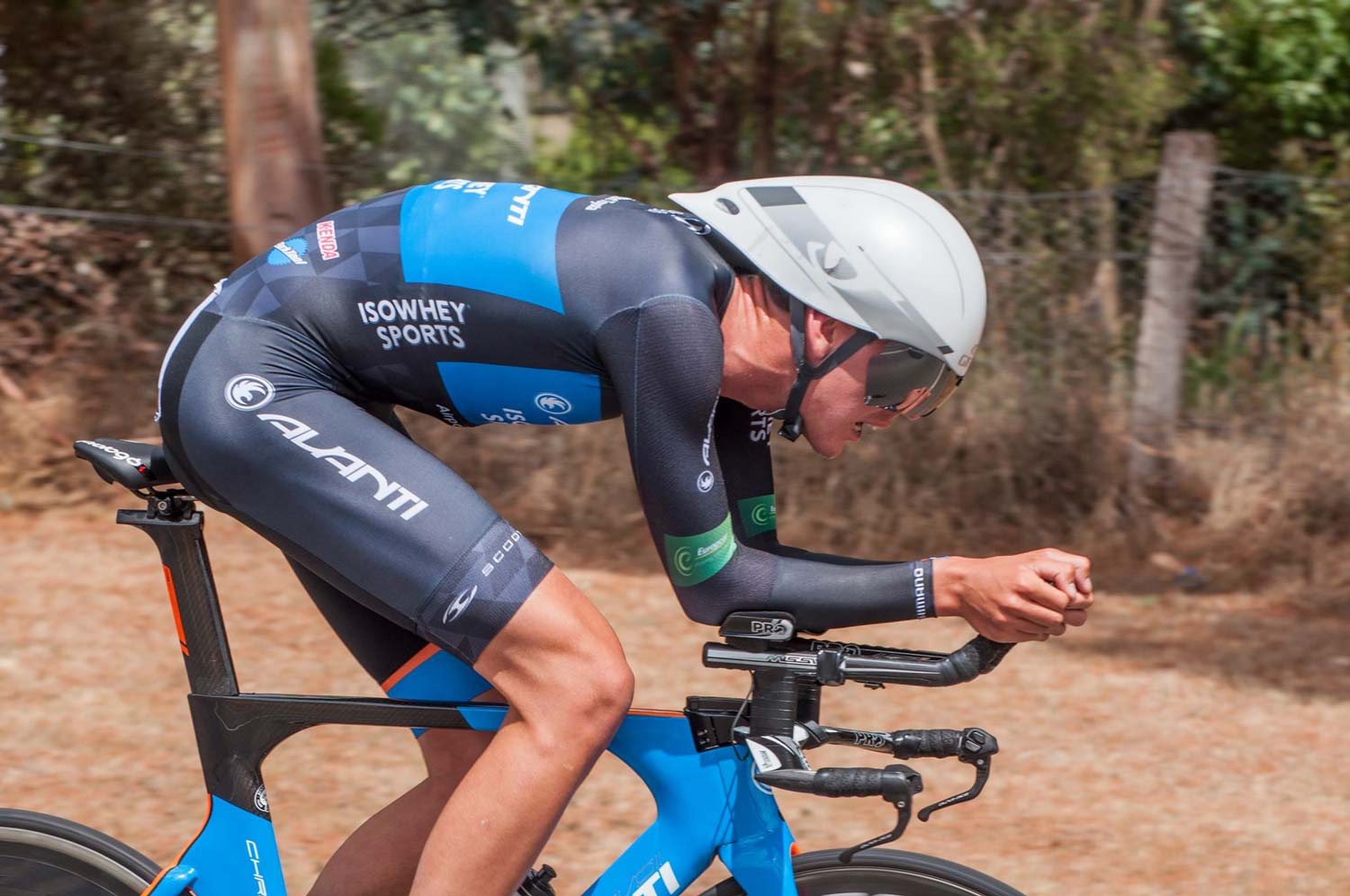 You’re talking about weight and you’re a 20-year-old man just about to start a pro career. Do you get a little concerned about that obsession with diet and looking after the minutiae of details that relate to how you’re going to be on the bike?

“I don’t really get so much ‘concerned’ about it. But I do think it’s extremely difficult to manage.

“It is such a habitual thing trying to consistently eat well and to monitor what you do intake is really difficult. And I mean, I don’t know whether it’s because you’re young and you’re not really 100 percent used to it, but trying to avoid those… not so much ‘bad’ foods either – whether it be bread and pasta and stuff like that – but it’s just making sure that you’re having enough carbohydrates you need [for] the larger days and on the easy days you can try and lay off it.

“I do think it’s extremely difficult to try and get right.”

Obviously everyone wants to encourage the notion of healthy living but sometimes the career of a pro cyclist doesn’t really go down that route. You can do some extreme things and meddle with your diet to the point that it becomes detrimental to your body. It seems like a negative way to start talking about a very new career but that’s part and parcel of what you’ve signed up for, isn’t it?

“Yeah. Well, being a climber as well, it is what comes with that speciality.

“It is what makes a difference. It is extremely hard to get right because you can go too far – and then you go completely wrong and lose your power and lose your strength and your punch, so balance is the key.

“But, obviously, when you do look at climbers per se, sometimes they do look a little unnatural.”

That’s going down into the more analytical pathway of the discussion but let’s just keep it a little bit of a broad overview because a lot of people won’t really have understood how Ben O’Connor came to be in Dimension Data… Apart from the fact that you did really well in the Tour de Savoie [can you go through a little bit] of the negotiation process? Was it fairly rudimentary or did it get complex?

Was it a case of: they saw you, they realised that you had good form, they looked at your numbers… and then they offered you a contract? How did it come about?

“It actually wasn’t really much about the numbers at all.

“I think it was just from the results that I’d shown during races this year.

“And Rolf Aldag, the head of performance, had seen an opportunity in a young rider to able to develop and become a GC rider… it wasn’t actually very analytical in the way that the contract was [offered]. It was kind of purely based on the results and the promise that was shown.” 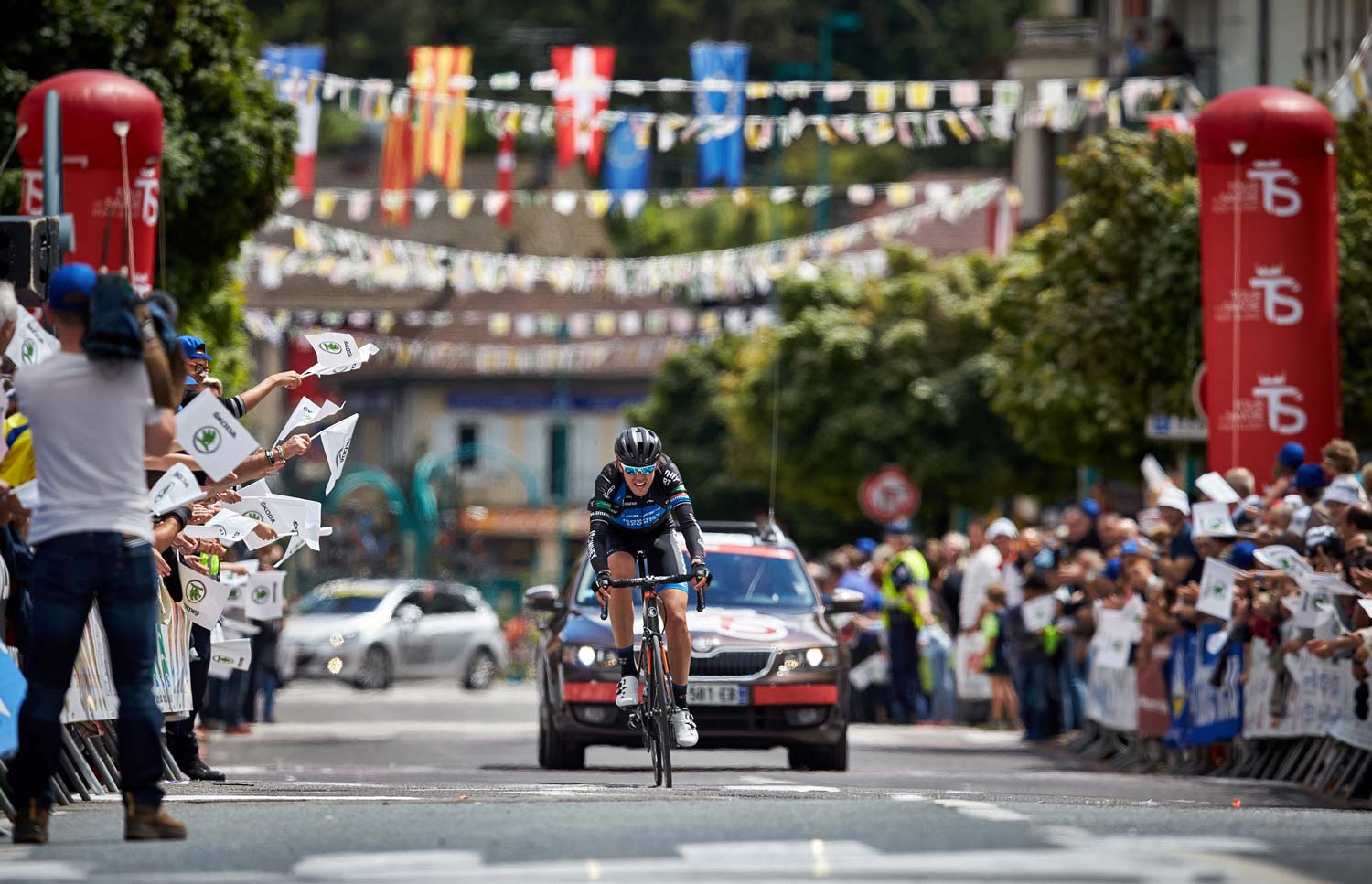 How important was Andrew Christie-Johnson, guys like Mark Fenner, the association with Avanti-IsoWhey? It’s a bit of a pro rider factory there, isn’t it?

“Yeah. Andrew has been absolutely unbelievable. The support that he’s given – he’s always there to help and you always can rely on him. If there’s every any issue or if there’s any queries that you need [answered]…

“The way he looks after all of us at Avanti is really… you can’t really put a price on it at all.

“The same can be said for Mark. He obviously has a lot of work on his plate with FTP Training, Today’s Plan but still the time that he gives up for us with all his coaching… you can call him any time you want and he will set aside his work and talk to you for anything from 20 minutes to an hour. He’s really a great guy and the way he’s coaching has definitely stepped up my performance.”

Can we get into some of the details that Fenner loves so much? He does some good analysis of power files and the like. What did you send off to Dimension Data to sort of confirm your capabilities?

“Like I said… this is what was actually surprising: it wasn’t really the data files and stuff like that was extremely important to them. I think it was more the results and the promise shown through that that gained their attention.

“Obviously all my power and all my data is on file so when they did ask for it, I was happy to show them and most of the programs show that the peak power and so on – for the year or whatever the time frame is.

“It wasn’t so much actually sending data to them; it was more [about] letting them pick which power files they wanted to see.”

While we’re on the numbers concept. Can you give us a little overview. You say you’re ‘tall’. How tall are you?

And you weigh in at with a race weight of…?

“In the middle, I’d say about 67kg but I can go down to 65 like I was at the start of the year for Taiwan and New Zealand.”

And in terms of your output: what did you do during the nationals, for example? Can you give us your normalised power for the road race that Chris won?

“I can’t actually remember. Normalised power, I’m sure, would have been towards that 300 to 310 [watts] mark. Just purely because the way that the race is kind of … the parcours is climbing, and then you’ve got kind of a drag and a descent where you are off the pedals for a solid period of time.”

People understand the Buninyong circuit so 310 on that for quite a few hours is a pretty impressive thing to hold.

“Yeah. I can tell you that on one of the stages in New Zealand I had a normalised around 340 on that final stage and it was lumpy but relatively flat. And that was just crosswinds and everyone just going full-gas to try and take the lead, on the final day, off me.

“That was a ‘normalised’ of 340 for three hours. That kind of thing. At that weight, it’s pretty solid.” 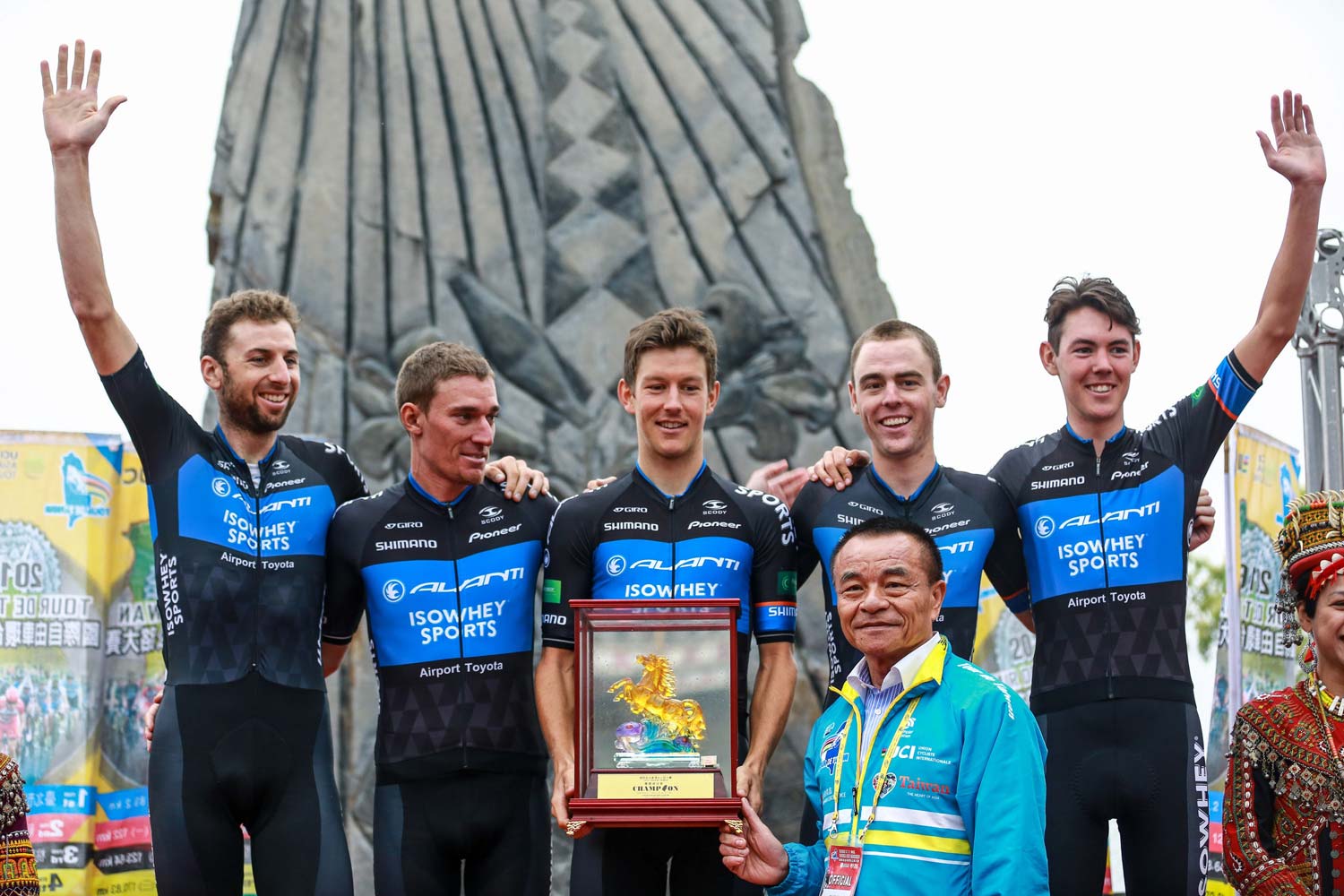 Just in summary, give us a little conclusion of what to expect from your first tenure on the WorldTour ranks.

“It’s obviously a huge honour to be able to ride in the WorldTour and just to continue to develop as a rider and be the best rider that I can be.

“I’m obviously going to be doing a lot of different things next year; riding for others, guys like [Steve] Cummings or Mark [Cavendish] or [Edvald] Boasson Hagen… so I’m really looking forward to be able to do that because there is that huge satisfaction of when you ride for someone else and then they get the job done.

“It’s a great feeling but then also hopefully I’ll continue to build on my ability to climb. And then hopefully in years to come it can eventuate into an overall rider [that] I’d really like to be.

“It’s just that continuous development process and, as you see from the best riders in the world, it comes with time.

“The fact that Dimension Data has put faith in me to develop and become a GC rider – become a climber – is hugely confidence boosting. I’m looking forward to starting to work with them next year.”

A quick overview of you and how you came to be in this position at the age of 20. How did you come to cycling? Is it in your family? What’s the heritage?

“It’s not really in the family.

“My best mate’s dad used to ride a lot and then my best mate started to ride himself. And I just became incredibly jealous because I used to think that a road bike was an amazing tool.

“Watching on TV, obviously the Tour de France is the main example – but it’s just what it was: watching guys go up the big mountains… it was just something that I always wanted to do but I never really did it while I was at school because there was a big emphasis on running – and because I could run, that’s basically what I was chosen to do.

“It wasn’t until I finished school that I changed from running to become a cyclist [and] I was able to begin my passion and my love for the sport.”

And here we are on the cusp of some exciting times, really…

“Yeah. It’s something that I can really hardly believe. It’s hard to [take] in but I really want to make the most of it and, like I said, be the best rider I can be.”