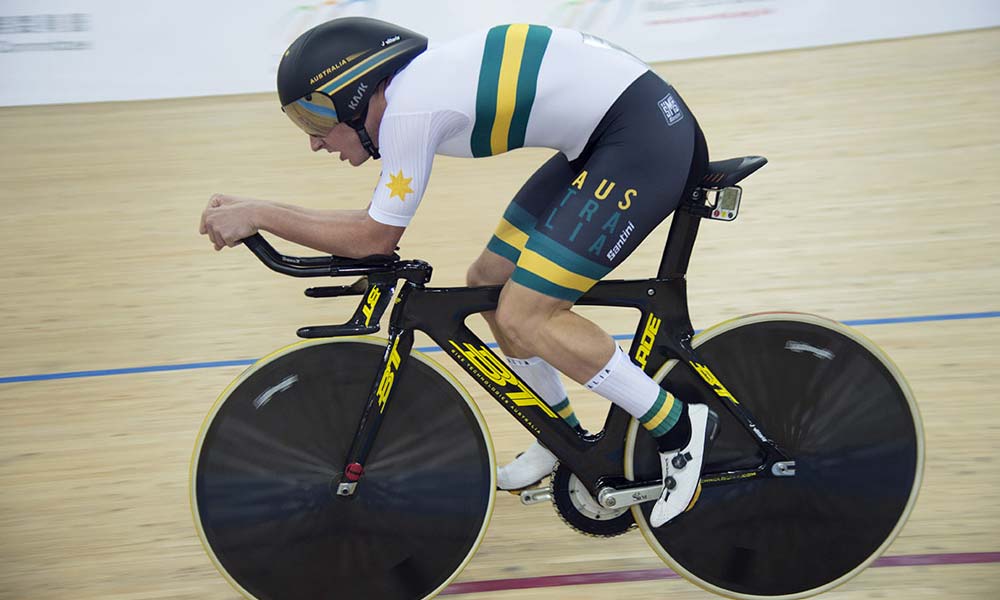 Jordan Kerby Q&A: how can track cycling be great again?

In the second part of our interview with the 2017 pursuit world champion Jordan Kerby we consider one of the great quandaries of track cycling: why is it not more popular?

Before trying to solve this, however, Kerby talks about the moment that he received his rainbow jersey in Hong Kong on Good Friday… 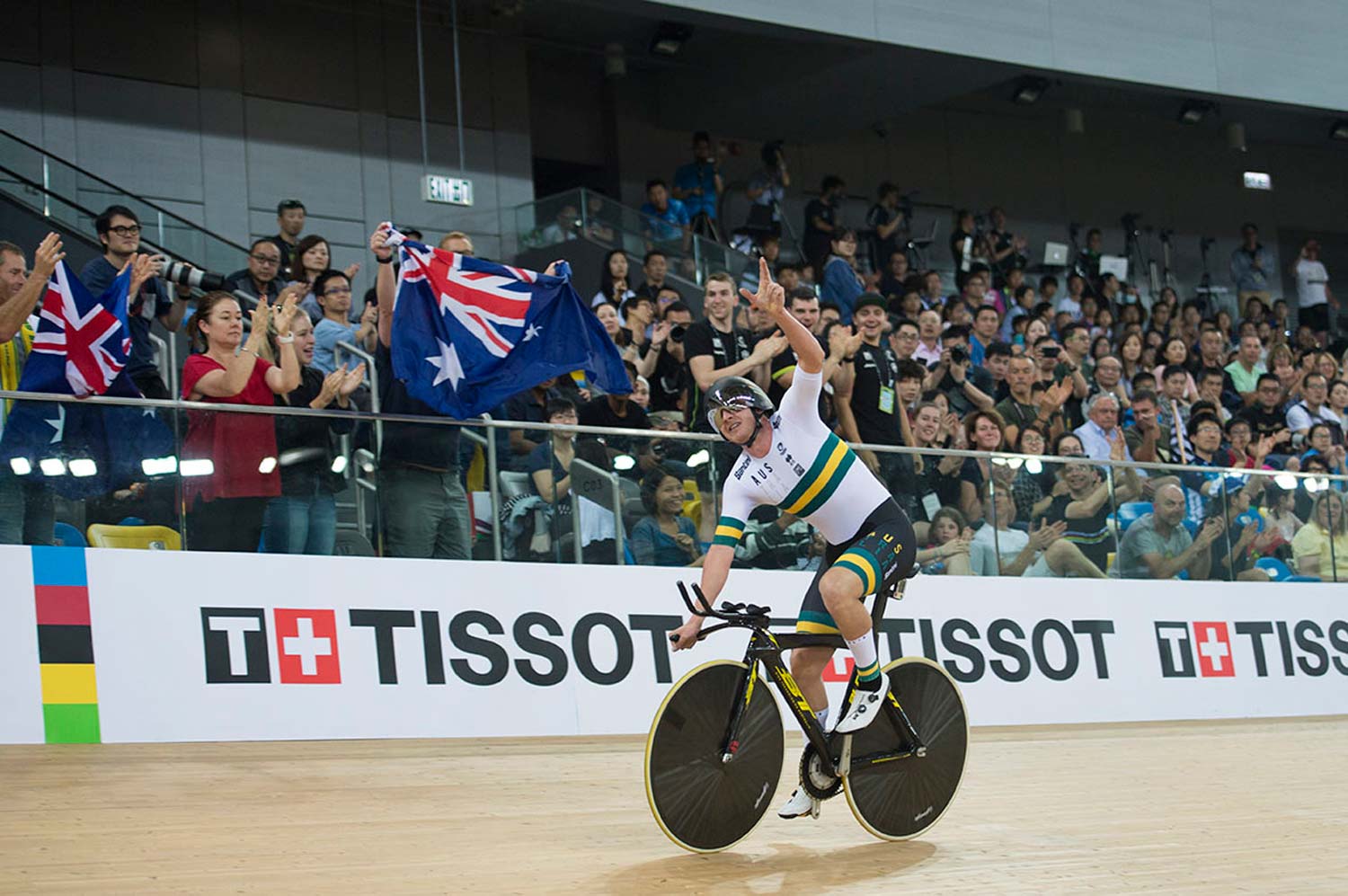 Click the SoundCloud file to listen and/or read the transcript below.

“It was pretty damn surreal. At that time it’s very hard to take it all in. Personally it’s something that I’ll look back on even a week after and go, ‘Wow! That just happened.’ But when it actually happens and you’re in the moment, it’s like, ‘Is this happening?’ You know…?

“I had everyone there from the Australian team congratulating me and telling me to take it in… and looking back on it, I just couldn’t really believe that it happened.

“It’s pretty cliché but if you do keep chipping away hard over time these things can happen.

“It’s a testament to the hard work that I’ve put in as well as the people that support me. It’s really nice to do something like that…”

You came out of the Drapac squad from last year. Is there a legacy from that? What was your experience in that team like?

“It’s probably different for different riders but I actually had a really good experience there over the three years. I definitely developed as a rider and as a person.

“It was definitely a very well run team: payments were always on time, people were always contactable if you need them… and also, I was going pretty bad last year on the road in some races and they were supportive and helpful.

“They did show sympathy and empathy for when you weren’t doing so well.

“They were all really good things. It was sad that I missed the cut [to join the Cannondale-Drapac team in 2017] but, in saying that, I also didn’t have the season that would have warranted a WorldTour contract.”

Okay, I understand. But there’s a lot of talk about all of the things that Michael [Drapac] puts in place to stand the riders in good stead for what he calls ‘The Transition’. You’ve very much remained an athlete… all of those systems that he put in place, do they resonate with you now?

“And that’s very helpful and it’s done a lot for me personally; like I wouldn’t have been able to start this coaching business thing quickly without their help.

“They had a wellbeing officer, Stuart Canavan, who I spent a lot of time talking with and he helped me through making a plan and how I would tick boxes.

“But at the end of the day it’s down to the rider to take that initiative – to take that transition program – and use it.

“Some guys didn’t use it but if you were to use it, it can be extremely helpful.

“For me personally it was good.” 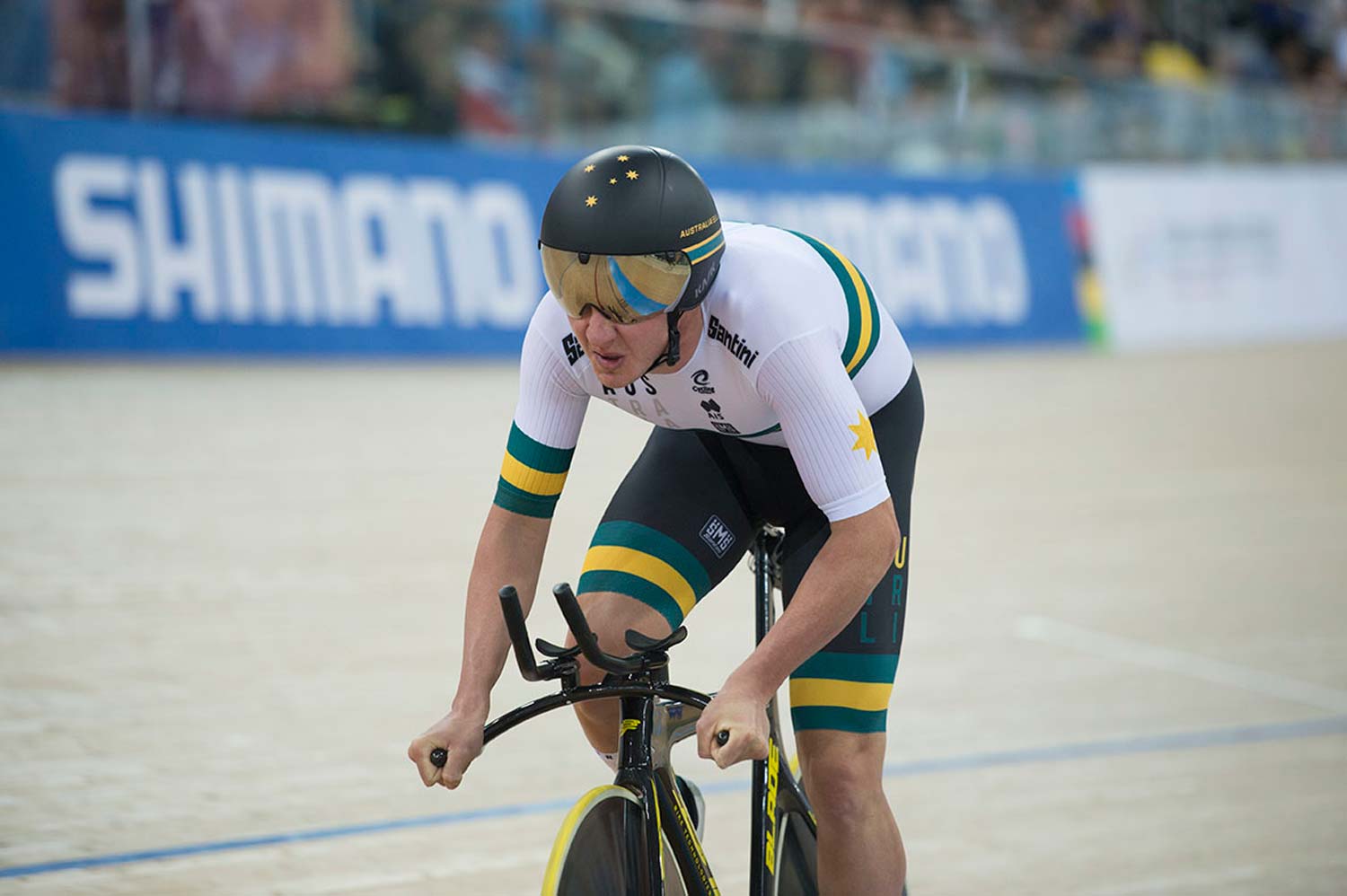 You know me, so you understand that I love track racing… but I just did a podcast with SBS and I said over Easter, I think all mountain bike tracks would have been full because of the beautiful weather, the road was packed with bike riders everywhere but the velodromes would have been largely empty. You understand what my line of thought is there. Do you think that track cycling can find a resurgence?

“You know what? I really hope so because it is such a beautiful sport.

“Now we have the prime opportunity for it to make a resurgence with the Commonwealth Games here on the Gold Coast next year.

“It’s a great opportunity for everyone to put on a show and bring back some of the passion towards track cycling.

“It needs to be accessible…

“Track racing and track training needs to be accessible, that’s what it comes down to: people being able to go to the track and have a kick around on it.

“I think that is how people will spark their interest in it again.

“I know, on some track it’s hard to get on. It’s hard for your regular rider to get on and cut a few laps… because, for whatever reason – whoever owns X track or Y track only lets people train at this time or you have to pay this much to get onto the track.

“I think it would be amazing if there were a lot of open sessions where people could just come along and have a try, you know? That would really help because you know as well as I do, people with a great passion for [watching] road cycling and mountain biking… well, they love it so much because they’re actually able to go out and do it as well.

“I think it would be an awesome thing if that could happen for the track as well but I don’t know what the answer is.”

Well spoken. I think it really is just a public liability issue. If they could unlock the padlock at Tempe velodrome or Narrabundah velodrome, for example, and just let people go and turn up with their $700 fixed gear bike and just spin around, like you say, ‘Just cut a few laps’ that would help with the resurgence.

“I think so too. I think participation is probably the main factor.

“And, as I said, I don’t know what the answer is but I think there needs to be something.

“Something needs to change.

“I don’t know about the public liability or anything, or how to combat it but I do think the main way for their to be a resurgence in track participation in cycling in Australia is for it to be more accessible.”

…Maybe you’ve seen, in recent months, I’ve been harping on about perhaps redirecting revenue from Cycling Australia, more towards the grassroots and away from elite. I don’t know how that resonates with people are in the elite program but what are your thoughts on some of what I’ve had to say? Have you read any of those [articles]?

“I have read bits and piece and to be one hundred percent transparent, I just don’t know enough about it or where it all comes from and goes.

“I’m not exactly in the high performance group as of yet but I’m not sure what needs to be done exactly. That’s a pretty hard one for me…

“I do think there needs to be time put into grassroots because, as we’ve discussed, the grassroots and the participation is where all the support comes from in the first place. And having people interested in it, wanting to go to races and watch events – that all does start from a grassroots level. So I do think you’re right that there needs to be something going into that – to making that more of a successful thing.

And I don’t want to put you in a political predicament but I think it’s interesting to hear you say that you’re not really part of the ‘elite program’ and yet you’re the world champion.

“Well, yeah. My personal resurgence has happened all in a couple of months so I’m sure that’s all to come.

“This comeback to the track has been a very quick process.

“I literally got to the worlds on one ride: well, two four kilometre pursuits at the nationals. It was all big whirlwind: ‘Alright, we’re going to give you the opportunity.’ ‘Alright, you need to be here on this day…’ ‘Let’s get it done…’

“And I’ll be touching base with them eventually, down the track.” 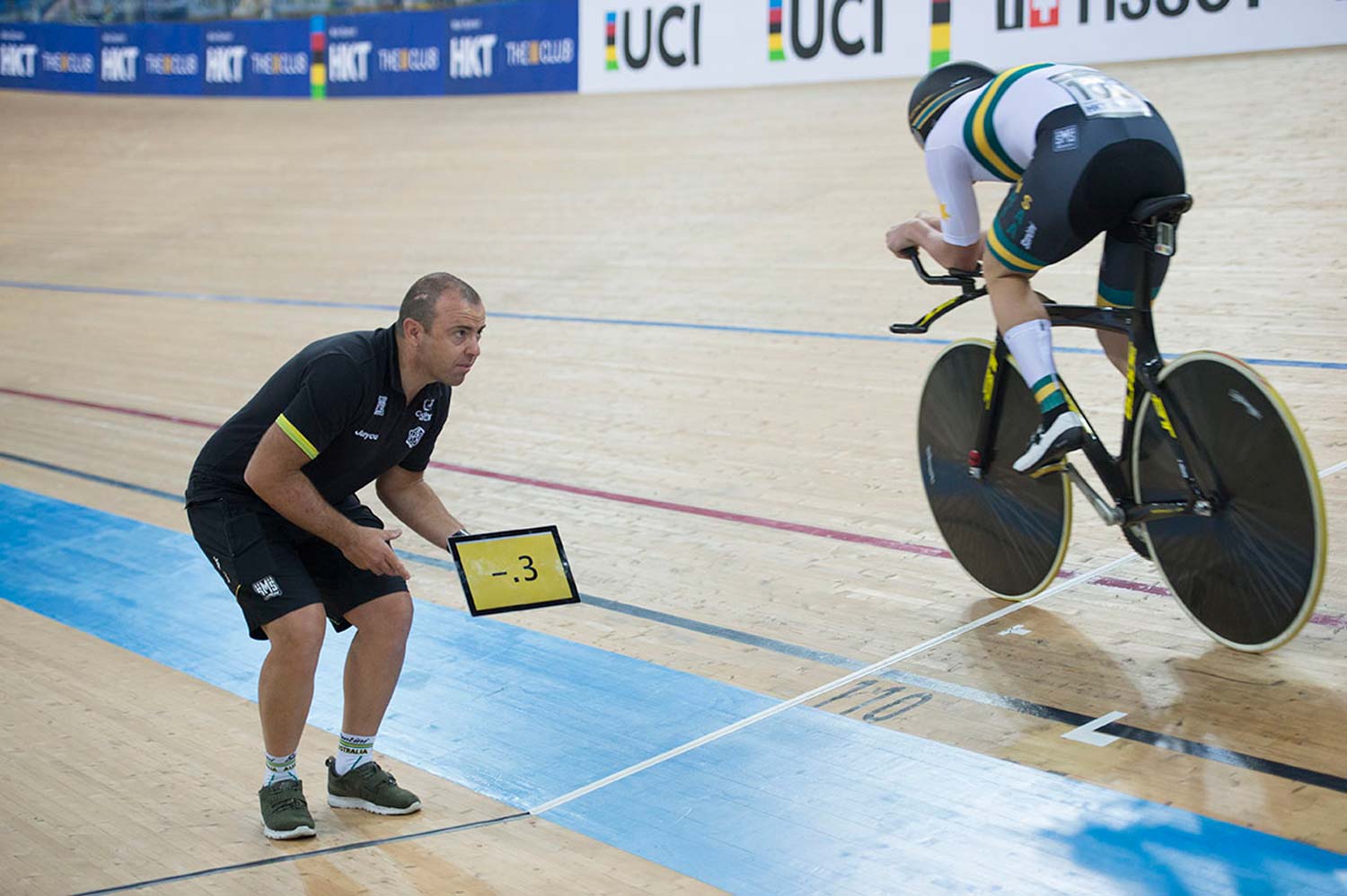 Just signing off to give a little bit of good feedback to Cycling Australia, the new outfit from Santini looked wonderful! Was there anything tech about it that made it special and allowed you to do a 4:12?

“Yeah, I actually think so.

“First of all, the pins – there’s a no-pin system in it so you’re not pinning a number on the back.

“For me, when I’m putting a skinsuit on normally and I’m putting the pins on and all that… the pins will always pop and there’ll be little bits of metal hanging out and the wind catches.

“Well, they’re got a system where you can slip the number into a no-pin sleeve from the inside of the skinsuit. I thought that was really cool.

“There’s this new fabric that doesn’t crinkle. You know how you put a normal skinsuit on and it doesn’t… it crinkles and the wind catches it? These skinsuits, there was no crinkling or anything. I found it quite astounding how they actually managed to do that.”

It presents well. I think it’s a nice look aesthetic and it’s good to see some innovation that’s come. I wonder if that’s lessons learned from the Olympic campaign… because Santini is not doing the kit for the Olympics, for example.

“Yeah, they’re not doing it for the Olympics but I think it’s going to be a great thing if Cycling Australia and Santini can continue their partnership because the stuff they’ve come out with is unreal.

“I’ve worn Santini for a long time, for whatever team I’ve been on and as soon as I put the skinsuit on I was like, ‘Yep, this feels good.’

Good stuff. The helmets look great. The team pursuit riding a crazy time – a 3:50 – is just proof positive that something is going right there.

“I noticed that it’s just a great culture within the team, and across disciplines as well, you know?

“Sometimes you’ll be in a team where, oh okay, maybe the female track sprinters don’t talk to the male endurance riders and so and so forth… but on this team everyone was talking to each other, hanging out – there was no segregation at the dinner tables or anything like that. It was actually really nice and it was good to get to know everyone.

“I’m hoping to pull that colour skinsuit on again in the future.”