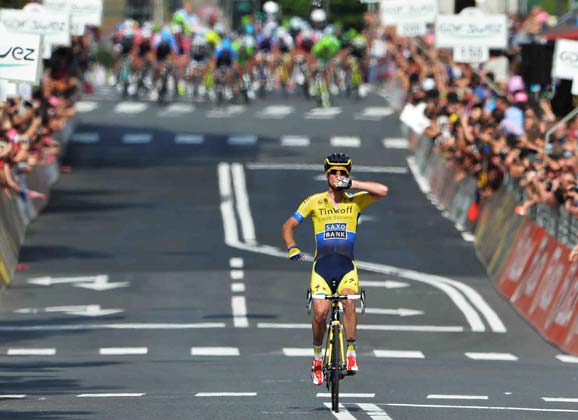 Michael Rogers: “It was certainly a victory for myself more than anything and for my family. Normally I’d never take such a risk, I’m a relatively calculated rider. I try to see the outcome of every move that I do but yesterday I just thought to myself, ‘What have I got to lose?’ And the opportunity arose… the major GC guys were all kind of looking at each other and probably trying to save a little bit of energy before tomorrow’s time trial.

“The opportunity arose… and I said, ‘I’m just going to go with my feelings and go for it.’”

RIDE: It was a little bit like back in the days when you were winning stages of the Tour Down Under – and the title – that’s 12 years ago… were you racing a bit like a renewed rider?

“Uhm. Yes, yes, but also with a few more year experience. But it’s… when you become successful in – I presume – anything, you try to be sure. And try to calculate the outcome of everything but sometimes it’s also nice to be hungry again and not be so sure of the outcome. And you have to create opportunities, even if the outcome isn’t guaranteed. Sometimes they’re the most beautiful moments of all.”

In the new issue of RIDE Cycling Review (#64, on sale next week) the first feature is an interview with Mick Rogers. He talks about his comeback to the peloton after a stint off. The story is well known. It should be for it is a precedent. And the consensus is that the correct decision has been made. Onward to racing. Fifteen days after knowing he could race again, he was in Belfast for the start of the Giro d’Italia; 28 days after finding out he could race again, he had won. Stage 11 of the Giro d’Italia: 1st – Mick Rogers.

We spoke to him the morning after. He is due to ride at 3.12pm today in a TT. He hopes to do well. We start the interview talking about the stage. The audio is poor, so sorry but there is a SoundCloud file of the recording. This is a rider who features in RIDE‘s 64th issue, who was in our premier edition back in July 1998… we’ve seen him do many things over those years but now, for the first time, we got to talk about him winning a stage of a Grand Tour. 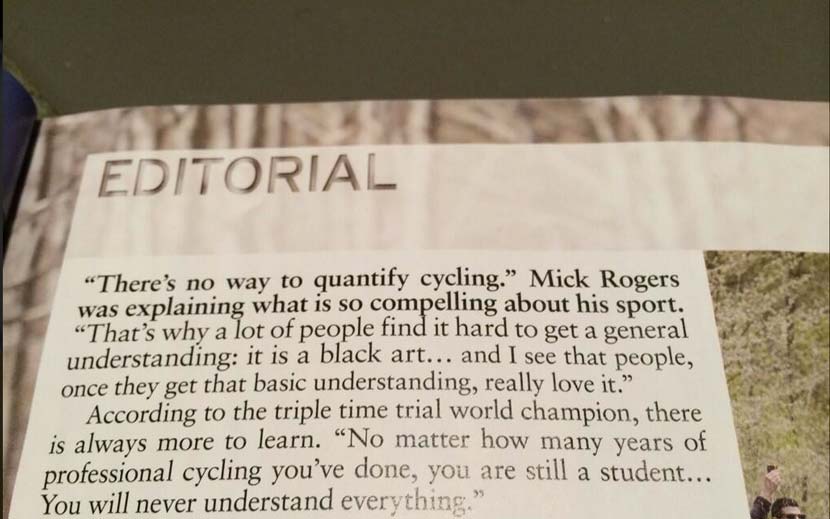 There was a brief interruption and we resume the discussion with Mick Rogers about his win in stage 11. It has been suggested by some that the stage win was something of a “gift”. Perhaps tactics is more appropriate…? Rogers offers his take. (Part 02, below)

How was your power?

“I just sent my file to TrainingPeaks and I think they’re going to do a piece on it, so keep in eye open. (See link.) I haven’t had time to analyse the file yet… it’s probably not that super high. It was also at the end of 250 kilometres.”

“The initial attack was viscious. Rogers’ exploded from the peloton putting out 467W for 1:16. This created the gap he needed on the descent to the finish.”

– TrainingPeaks on Rogers’ file for stage 11 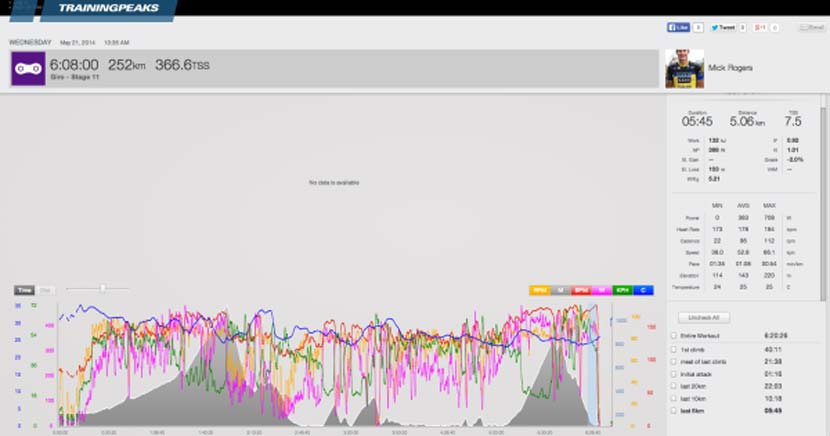 The victory in stage 11 of the Giro was on a Specialized Tarmac, the 2014 edition. Recently launched in California, Rogers is the first on that bike to have won a Grand Tour stage… (Rigoberto Uran used a different Specialized the next day to win the TT, but that’s another story.

Below is the final part of the chat with Rogers a day after his win. We talk bikes and power. (Click the image above for some great insight into the output of Rogers on the day of his win.)