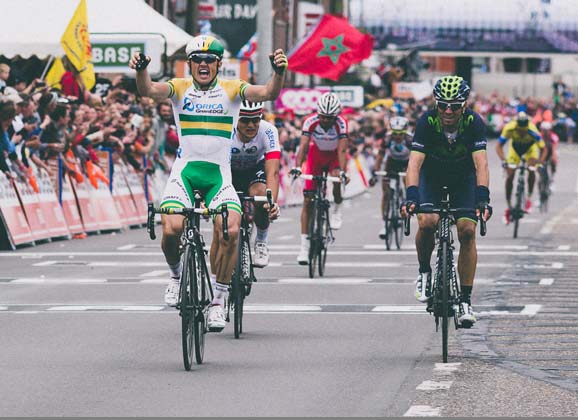 Simon Gerrans on his Liège-Bastogne-Liège victory

On the night of his victory in the 100th edition of Liège-Bastogne-Liège, Simon Gerrans celebrated on the team bus and then jumped on a flight back to his home in Monaco. A mini off-season would start the next day. His Classics campaign for 2014 had a successful ending. But this is a rider who always seems to conjure another item to tick off his to-do list. Monument won, now it’s time to prepare for Le Tour… this is the sentiment of a pragmatist. On the Tuesday morning after ‘La Doyenne‘ he was looking after his kids and he put 15 minutes aside to talk about what had recently happened.

Simon Gerrans has featured in RIDE plenty of time over the years. Here is part of the latest interview with the Australian champion who just keeps on setting precedents… 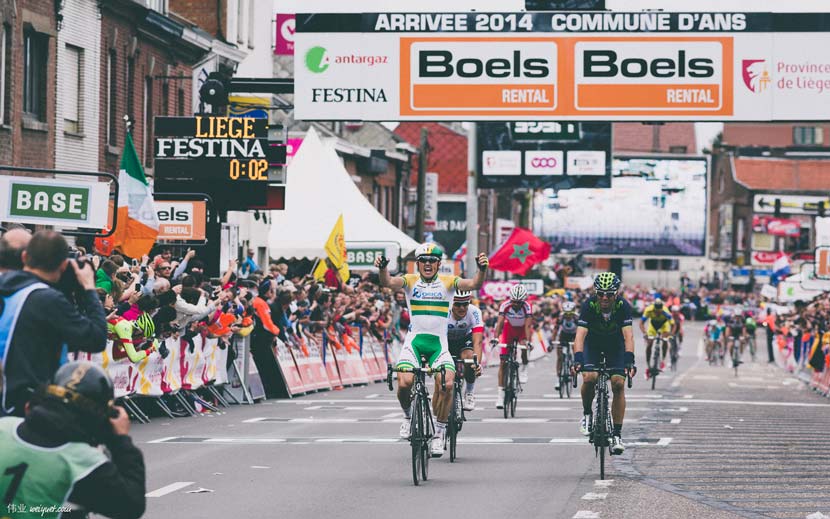 Simon Gerrans: “It feels like I’m still getting better every year…”

RIDE: It has been a big few weeks for you, as always in April, but this one is something special isn’t it?

Simon Gerrans: “Every year April is obviously a pretty important period of the year and I put a lot of emphasis on it every season but this was a stand-out [European] Spring for myself, that’s for sure.”

Obviously we want to talk about Liège-Bastogne-Liège. I’m sure you’re going to be in the media elsewhere as well because of the win. What is the biggest reaction you’ve had because of it?

“Probably the biggest reaction that I’ve had is when I hear the management at Orica-GreenEdge and the directors say, ‘This is our most important victory’. We’ve had such a successful last couple of years so for them to rate this above Milan-San Remo or the days in the yellow at the Tour de France… that sort of thing, it signifies how special it is to win Liège-Bastogne-Liège. Obviously there are so many little parts that add to it: the fact that it was the 100th edition, I’m the first Aussie to ever win the race… all these sorts of things combined make it such an important win.”

I know that you’ve got problems with allergies. Is that what knocked you out for Milan-San Remo?

“Oh no, not that time. I had a few allergy issues around the period of Paris-Nice and when I first arrived over in Europe in February but, I just came down with some 24-hour bug the day before Milan-San Remo. It wasn’t an allergy thing whatsoever; I came down with a virus which I think people get every now and then and it was just really unfortunate timing.”

Well, not really because it meant that you got to miss out on another freezing edition of that race. I spoke with Matt White yesterday and he said that was a huge benefit for you on Sunday [in Liège-Bastogne-Liège]…

“Yeah, with hindsight it’s been a huge benefit but at the time I was obviously pretty disappointed when I woke up in the morning planning to drive to Milan and I could hardly get out of bed. I was bitterly disappointed at the time but that went away slightly the following day when I was actually sitting on the couch watching the race unfold and thinking, ‘Oh well, I probably wouldn’t have been able to make a big impact on that race, in those conditions.’

“Now, obviously, the fact that it slowed me down for that little period in March it made me a little bit fresher in April and it’s all eventuated perfectly.”

Let’s talk about Liège. I’d like to see it from how you saw it because you seemed to be utterly patient. From the television screen, that looked like your big strength: you never panicked. How is it in that situation when you know there’s something going up the road and you just feel it’s the right thing to do to wait?

“Basically, that was the tactic. That was what we had planned to do at the beginning of the day. And that was the card I had to play.

“The parcours this year was even more difficult than the last few editions and you just can’t really afford to use up too much energy in unnecessary efforts coming into the final. I rode a really good conservative race and made sure that I was near the front for all the key points. It’s a real credit to my team-mates who helped me with my positioning and gave me the confidence to just battle on and stay up the front. The fact that I did ride such a conservative race and didn’t attack or didn’t go with any of the big moves the Roche-aux-Faucons or even the côte de Saint-Nicolas meant I had some gas left in the tank for a sprint at the end.” 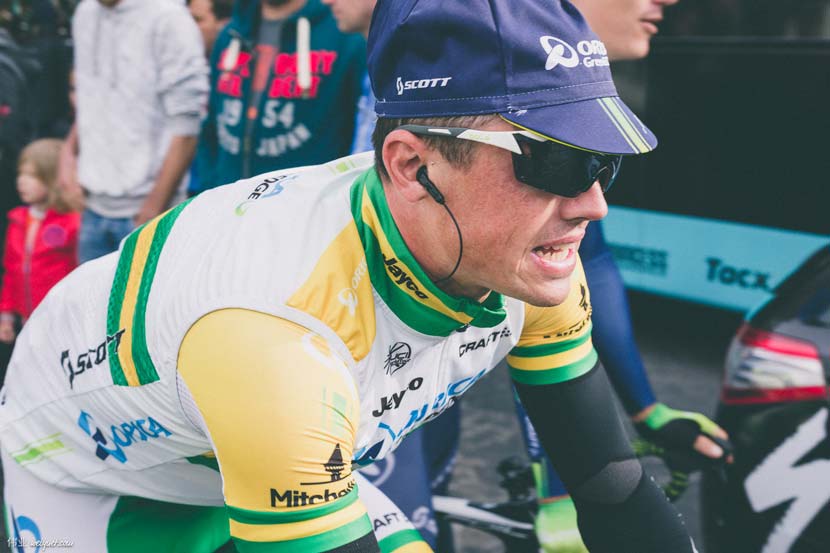 Is there some way that you mentally prepare for something like that to give you a little bit of an advantage? Can you explain your approach?

“It’s not like I go through any mental preparation exercises leading up to a race or anything like that. But I think that, in doing everything right and making all those little sacrifices in training and preparation, it gives you confidence. And when you’re confident in your ability, with the knowledge that you’ve done everything right, then it makes you confident in the race because you know you can do the job.

“And then the influence of stress that comes into it as the event gets closer; and you worry a little bit more about the uncontrollable aspects of it – crashes, punctures, unexpected blokes clipping away… that sort of thing. That’s what I get a little bit nervous about leading into the race. But as far mental preparation goes, I think it’s all about confidence and you get confidence from doing everything right.”

Can you talk a little bit about Alejandro Valverde. Of late, you’re his shadow or he’s yours… but the two of you are very closely linked in a lot of races, aren’t you?

“When it comes to these one-day races, we are very evenly matched. Obviously when get into the long stage races he’s a class above, there’s no question about that when you consider his palmarès. But for a few periods of the year that I really target races, Alejandro is often targeting the same ones so we come up against one another quite often. Unfortunately this Spring, I had to shadow him a little bit but he’s also beaten me quite a few times in the past as well. We are pretty good competitors.”

Going into that sprint, you came off his wheel. You would have believed him to be the main threat. Did you feel like he might have gotten around you?

“When he kicked out of the last corner, I followed him for a short period of time and then I went past him. I was confident that I had him covered but when you’re sprinting after 263 kilometres, your legs are so empty that it feels like you’re sprinting in slow motion.

“Just as I was approaching the line, I half looked under my arm to see if anyone was coming past. At that point I didn’t see anyone coming so it was also when I realised I’d won the race. But your legs are so empty at the end of a long day like that and you never quite know how anyone else is feeling so I could never be sure.”

We always love to hear about power, especially in races like this that are so extraordinary – beyond what the typical bike rider might do. I can’t imagine your numbers would have been huge in the sprint…

“Oh I didn’t feel like I was putting a lot of power out. And I actually wasn’t using the power crank in the race so I can’t talk to you about the numbers I was doing. But the run in up to Ans at the finish is deceptively hard so, by the time I actually opened up the sprint, I was so empty already that I know I wasn’t putting out any big numbers.”

It’s interesting that you didn’t have the power crank on. It would have been some great data on a course like that.

“Yeah, the data is interesting but the result is more important.”

This Michal Kwiatkowski… you would have been watching him as well. Did he wreck the race for himself by being so eager early?

“I know he was jumping away in a couple of little moves so he was obviously feeling pretty good but he’s a young guy and he’s so talented and there’s no doubt in my mind that we’re going to see him on the top step of the podium in Liège in the years to come. He’s 10 years younger than me so he’s got a heck of a lot of time on his side.”

How many years do you think you’ve got left doing this sort of caper?

“That’s a good question but I’m not sure at the moment. Obviously it feels like I’m still getting better every year and my palmarès is showing that so at this point I don’t think I’m slowing down much so I’m not going to put a number on it but I still feel like I’ve got a few years ahead of me.”

Did you head back to Monaco straight away or did you stay the night?

“We all hung around and had a few celebratory drinks on the bus after the race and then I had a flight back to Monaco that night. I got home late on Sunday night and I’m hanging out at home for a few days now. Like I’ve said, this is a real break for me. I have a mini off-season at this time of year. I really shut it down and try to recharge the batteries, mentally and physically so I can start building towards the Tour de France.

“I’m definitely having a few days off the bike this week and a couple of drinks as well.”

You can see that I’m fishing to make sure that we’ve got all topics covered but is there something that I’ve missed that you’d like to talk about?

“I guess one of the real standouts about the win in Liège that was obvious was how good the team was. I’ve seen a lot of commentary about how impressive and committed my team-mates were on the day. They had their jobs at the start of the race and everyone did a fantastic job of fulfilling those roles so I think it’s a real credit to the team that I was up there and fighting for the win.

“From my perspective that really can’t be emphasised enough.”

And from what’s been written in the press, it’s negotiation time. I would imagine that Gerry Ryan would be quite willing to pull out the cheque book again for the next few years.

“Hopefully, we’ll find out about that soon. But you’re right: I’m at the end of my contract with Orica-GreenEdge and we’re going through the negotiation period at the moment and I really hope to have my future sorted out in the coming weeks. 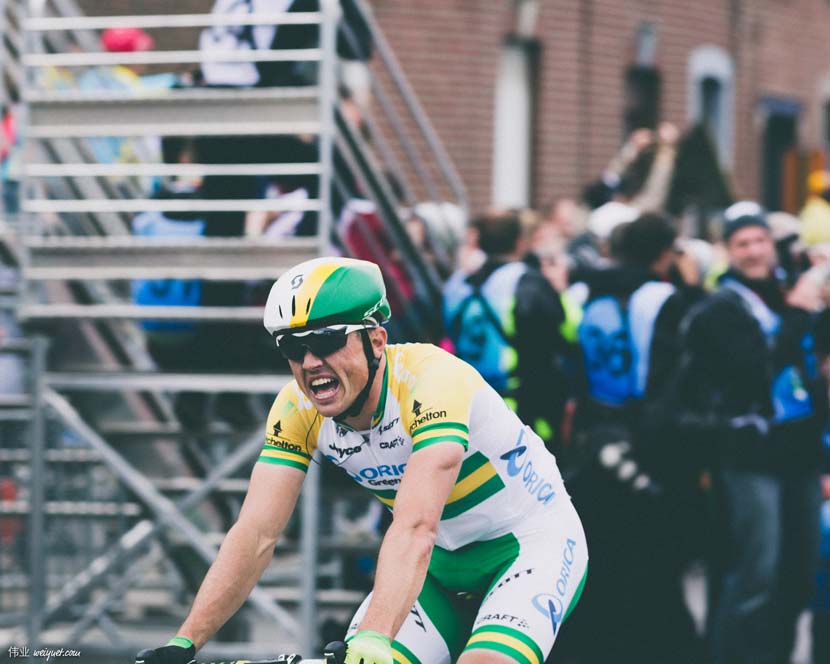