Coefficient RR Handlebar review: observations before, during and after first ride

One ride with the Coefficient RR handlebars was all it took to nullify a little hesitation about swapping perfectly good handlebars with a new product that’s said to be designed to increase ventricle and metabolic efficiency.

– Click the link below to watch the video about the first ride with Coefficient RR handlebars. –

The backward, slightly downward bend of the handlebars is dubbed ‘Swoop’ by Coefficient Cycling. There are claims about the benefits for the rider and some of these were referenced during a long unboxing around a month ago. For the purpose of this review, however, little time was spent reading what the company had to say about the dramatic handlebar redesign.

Instead of having my head filled with what Coefficient Cycling wanted me to know, my intention was, quite simply, to ride them and judge for myself what the benefits are.

I confess, there was a false start of sorts. After the original trip to the workshop to have slightly longer hydraulic hoses fitted (to suit the new handlebars while not meddling too much with the internal routing through the stem, as offered by my Focus Izalco Max’s proprietary system), I saw enough to know that the RR bars would dramatically affect not only the handling of the bike but also the aesthetics. 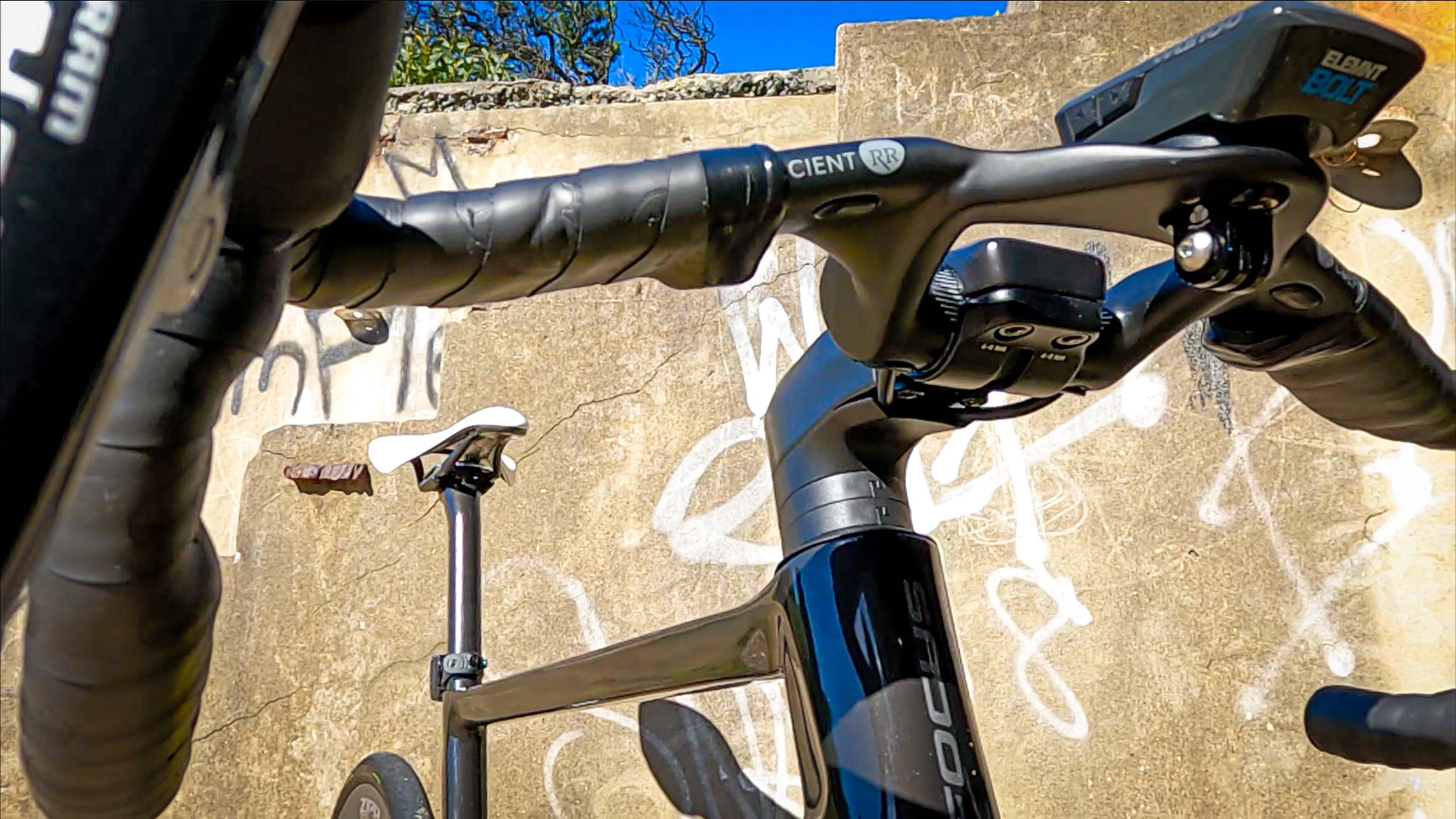 ‘Yeah, they look cool.’ That seems the response from most who have seen them, but they are also rather extreme. And this prompted questions to emerge about the point of the exercise.

Is it really necessary? Are the handlebars going to improve what is already a nice bike? Is the extra weight and full-on ‘cockpit’ going to change the dynamic of my Focus? In other words: is it worth doing the swap?

Committed, but hesitant, the installation went ahead, and we all sat back to admire the space-age look once the job was done. And then I duly asked the mechanic to bung my original handlebars, Zipp’s SL80s (aluminium, with a fairly traditional shape and bend), back on the Focus.

I’d been on a different bike, what became known as #ProjectCaledonia, for months and before making any judgements on the Coefficent RR handlebars, I wanted to go back to my bike with the set-up I had been familiar with. With the Focus-vs-Cervélo video finished, I thought it was time to continue the review of the new handlebars… and so it was back to the workshop again for another refit. 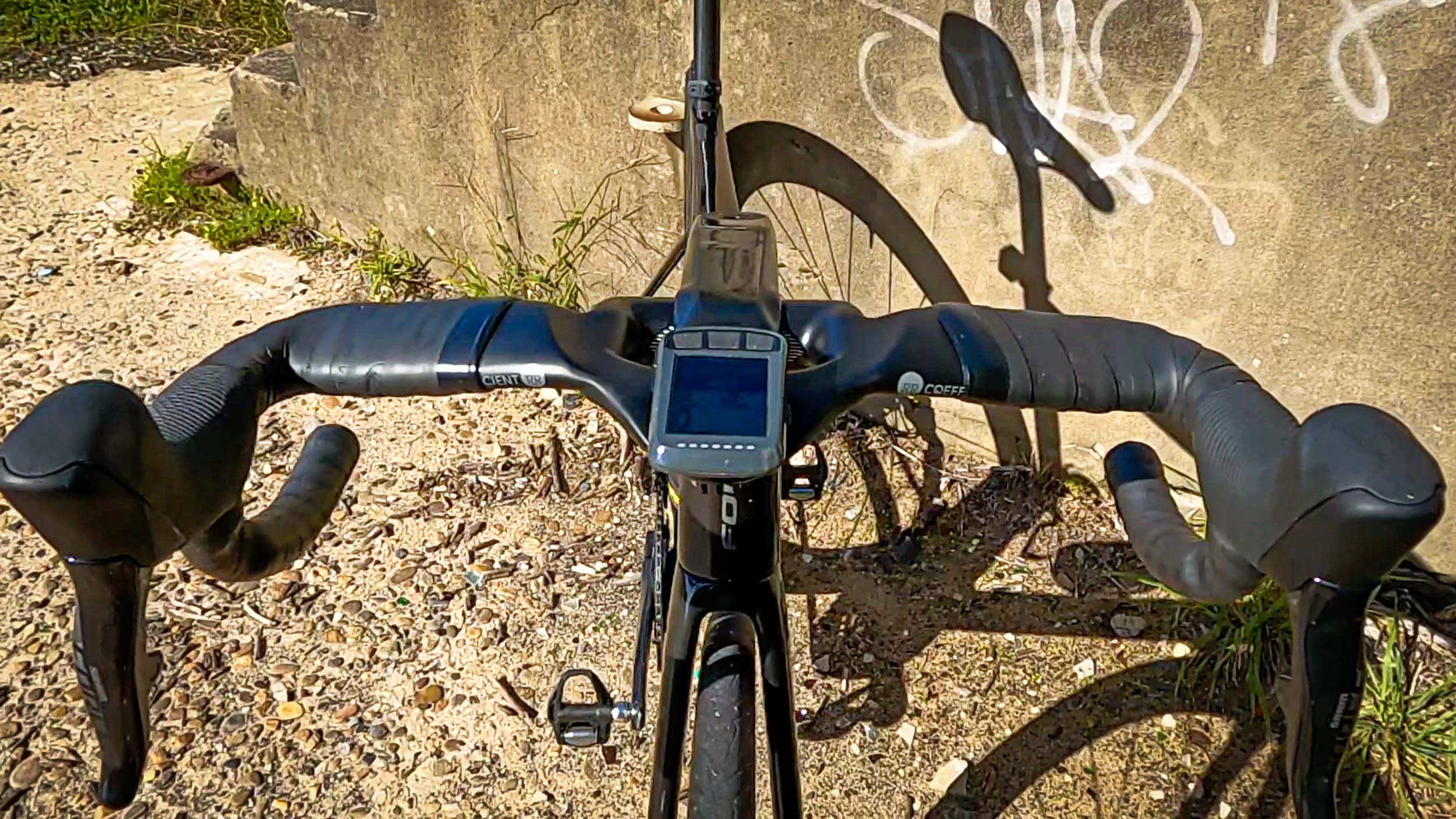 Bar tape up the ‘Swoop’

As you can see in the pictures, the decision was made to tape the Coefficient RR handlebars almost up to the stem. With flat-top aero bars, the ideal scenario – one might assume – would be to leave the carbon-fibre bare and not interrupt the aesthetic (ah, I mean airflow).

I’ve ridden raw carbon-fibre handlebars (ie. without bar tape on top) and I’m not a fan. There’s a reason why bar tape is fitted, and it has a lot to do with comfort as well as grip. On raw carbon, the risk of slipping is heightened, and more so when you consider the influence on your grip of things like sunscreen, or even rain.

It might not please the aero-set but I’m pleased with the outcome. (Note: I asked Archie, the mechanic at Velofix, if he could wrap the top section as tight as possible, and he’s done a fantastic job with the bar tape that came shipped with the Coefficient RR handlebars.) 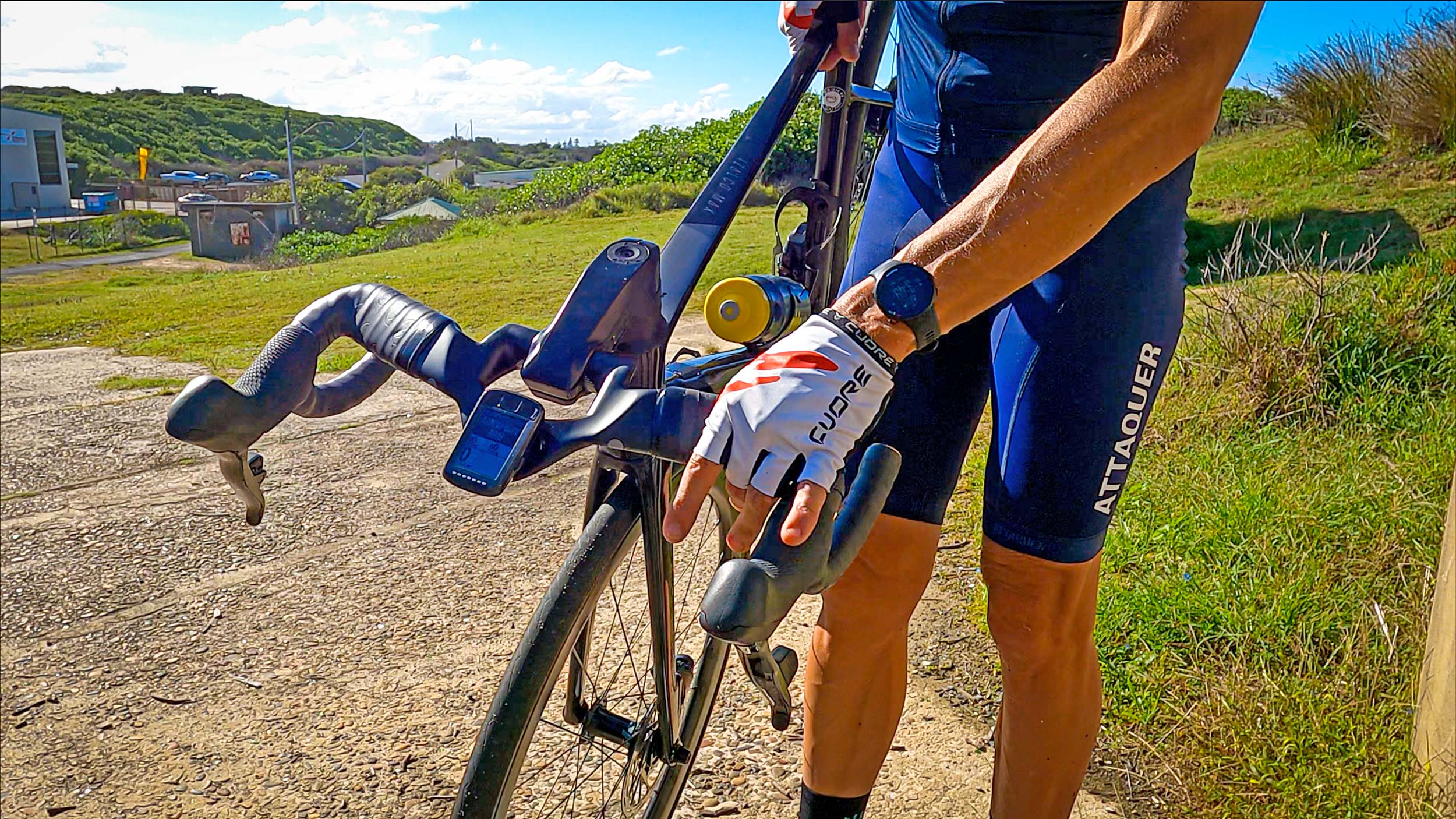 SRAM ‘blips’ in the mix…

Another reason for wrapping the tape most of the way up the handlebars was that I wanted to use some remote shifters for my SRAM Force AXS groupset. This time I’m using SRAM’s ‘Blips’ rather than the Multiclics on the Cervélo Caledonia project bike.

Although there’s a dent in the drop of the handlebars, which many assume would be ideal for Blips, I am happy enough using the shift trigger on the levers when I’m riding in the drops. My preference for the remote shifters is to have them up near the stem and again Archie has done a great job fitting and hiding them underneath the tape.

There are several internal cabling options with the handlebars, but the length of wire that attaches the Blips to the levers is surprisingly short, and it meant the solution to hide the wire was to have it underneath the bar tape, but outside the carbon-fibre handlebars. 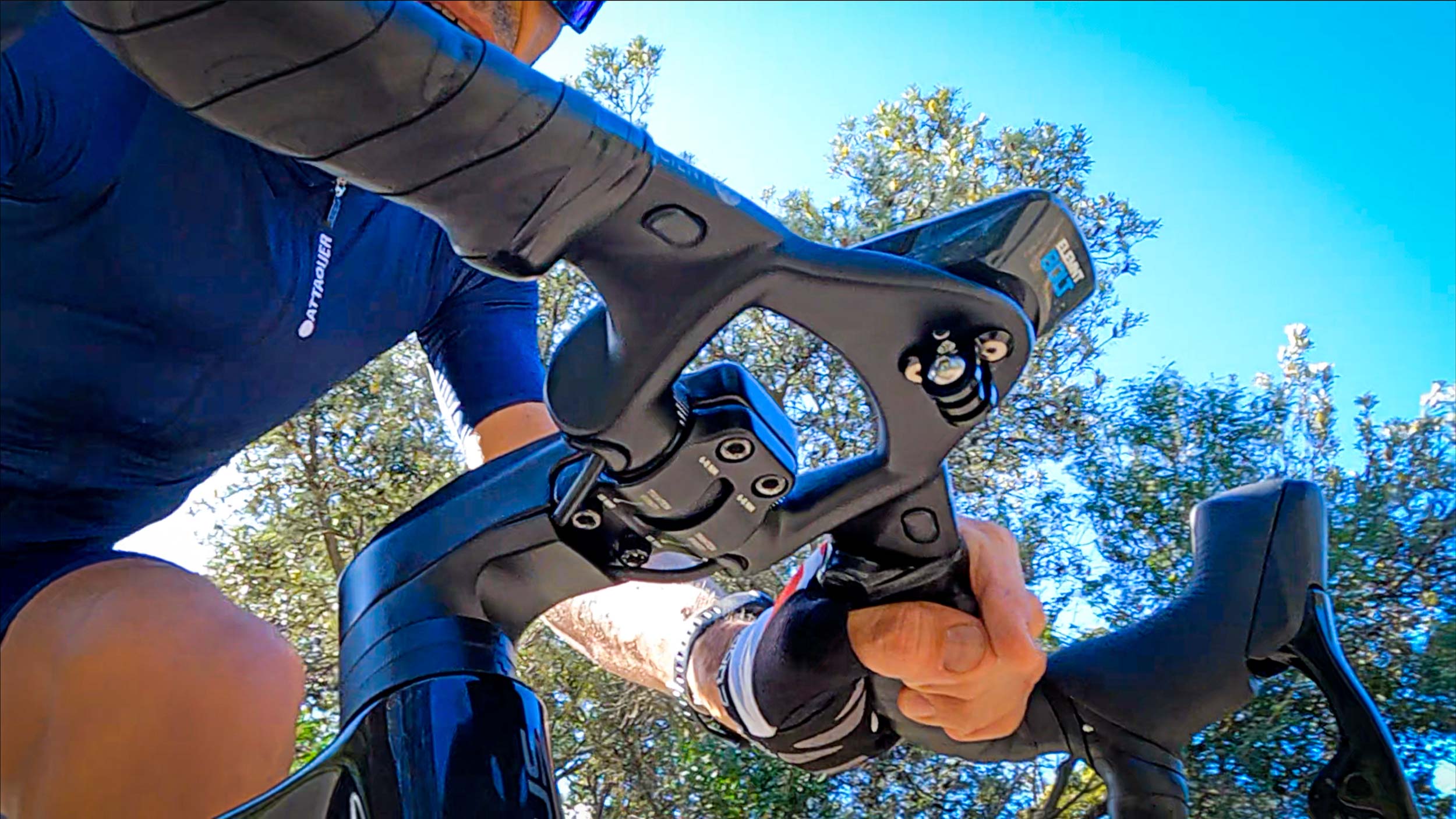 It’s all background information to this point, and the thing you probably want to know most is: how do the handlebars ride? What’s the sensation of the Swoop like? Do I feel more efficient with my ventricles and metabolism? Did I go faster more easily?

Watch the video and you’ll get answers to these questions from during and after my first ride. To summarise, however, the Coefficient RR handlebars certainly put me in a position that was very comfortable to ride in – and this doesn’t only relate to Swoop at the top.

My hands found numerous positions, all of which felt more ergonomic than what I am used to.

The slight drop of the handlebars lowers my shoulders ever so slightly, but that adds up to a more comfortable riding position with less of a hunch in my back and a more natural shoulder position. I question if it’s noticeable while riding with the camera and, upon seeing the footage back in the office, I think it’s obvious.

Furthermore, after several hundred kilometres more on the bike with these handlebars, I’m even more impressed than I was on my first ride. 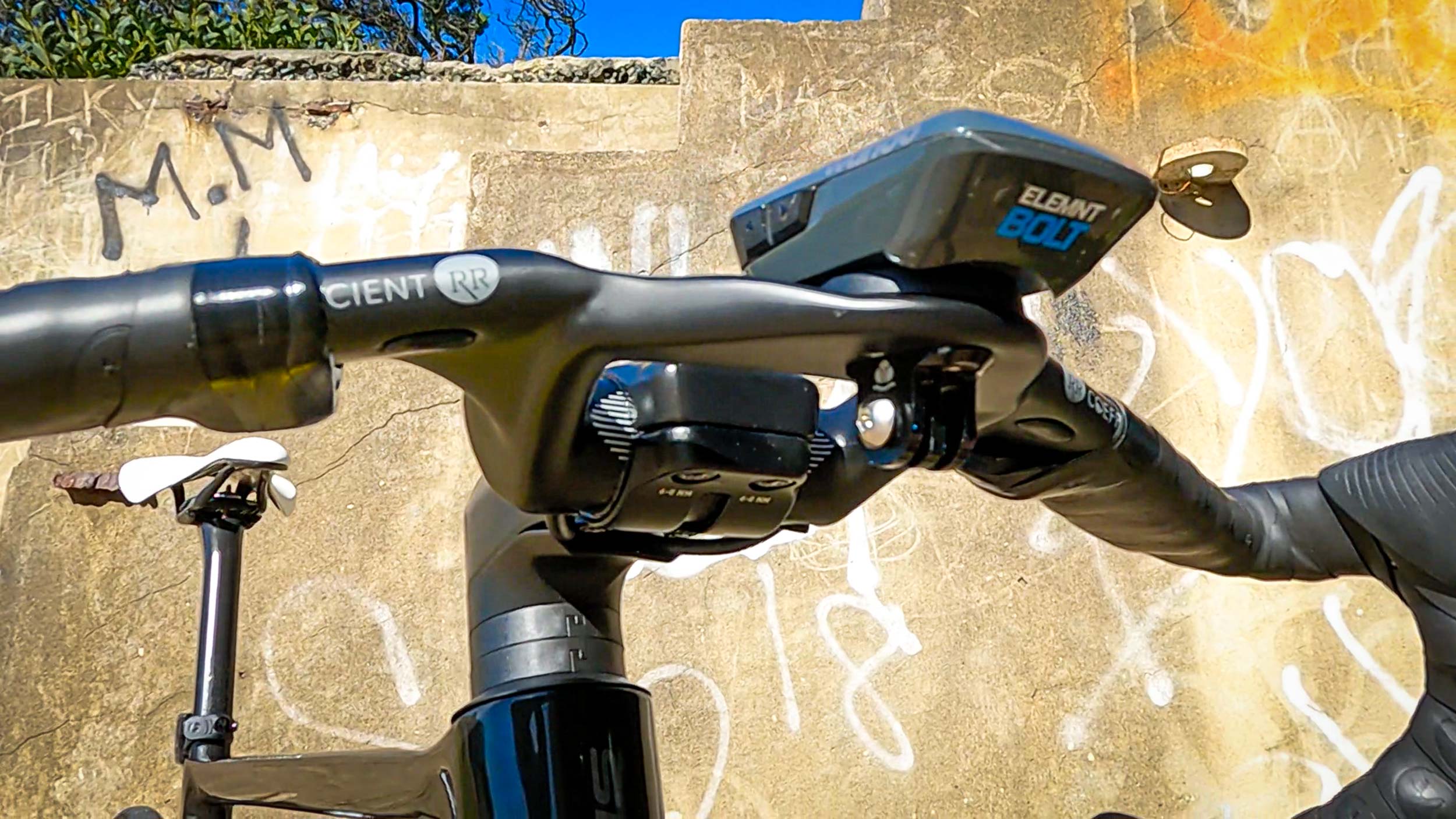 A lot of thought has gone into this redesign of a traditional component and although there’s a slight weight penalty (314g for the Coefficient RRs vs 276 for the Zipp SL80s), I’m happy to have made the swap. I’m yet to decide if I keep these on my bike forever more, but for now I’m enjoying the experience and highly recommend the RRs… now, all I’ve got to do is work out what the price is before I offer an appraisal on value.

I do know that they’ll be sold in Australia through the Pushys portal and that a shipment is due in the coming weeks or months.

If you have any questions, don’t hesitate to write and/or leave a comment on any of RIDE’s social media channels.