There’s a cycling tyre revolution taking place in 2020 and Goodyear is one company with a long history that has released new rubber for road bikes this year. After over a 1,000km of use, here’s a summary of riding experiences with the Eagle F1 with tan sidewalls.

With effective disc brakes and much of my riding done in and around Sydney, there have been plenty of occasions over the past month when I’ve had to lock up the back wheel to avoid an incident. And although I’m well beyond my childhood years, a sick skid still has the power to raise a dry smile.

What’s not great about it is that each stop like that skims a little rubber from my tyres.

Interestingly, there’s not a lot of evidence of the many skids done in my introduction to Goodyear cycling tyres. At AUD$89.95 per tyre, you don’t want to swap these before their used by date is really up – and skids aren’t exactly ideal for limiting tyre wear. So far, all is still good.

I’m also pleased to report that after around 1,200km of riding, I’m yet to suffer a puncture. Furthermore, although there’s been a fair dose of broken glass pass under my wheels in that time, there’s barely a mark on the black strip of Goodyear rubber up the centre of the Eagle F1 tyres. 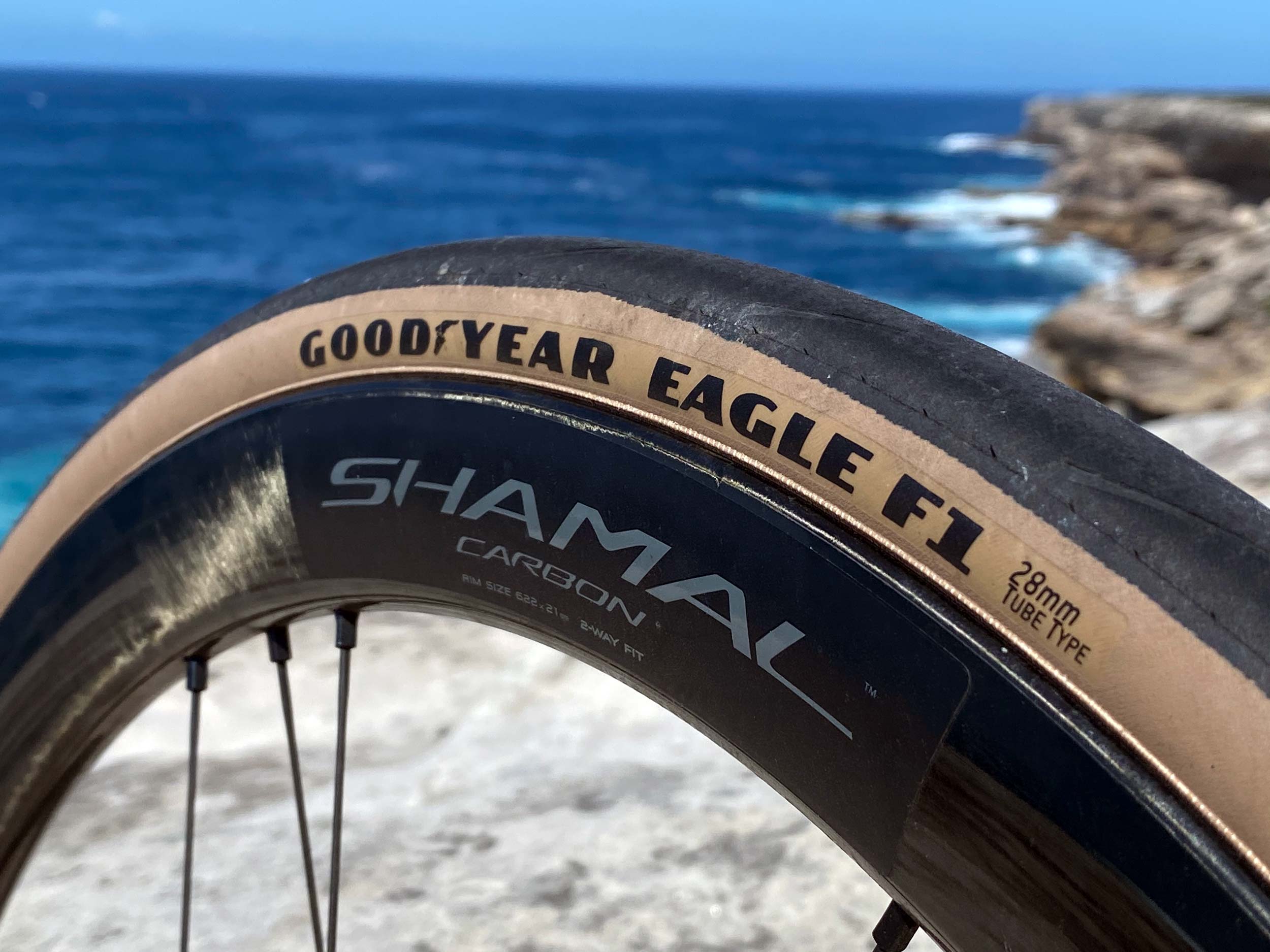 The photos here show the tyres at the turnaround point of a ride after having the Goodyears on my bike foe four weeks. The front (below) barely has a mark. The rear is considerably worse off, particularly – as you’d expect – down the centre strip (above). It’s a little flatter but, again, there aren’t any cut marks in what must be a pretty tough compound even if it rides quite ‘soft’.

The grip is good, excellent even. Not once did they jerk or slide, on dry and wet roads. When the discs did grab – in a tight moment of city riding, or at high speed – the skid was manageable, and the lower tyre pressure allows more control. 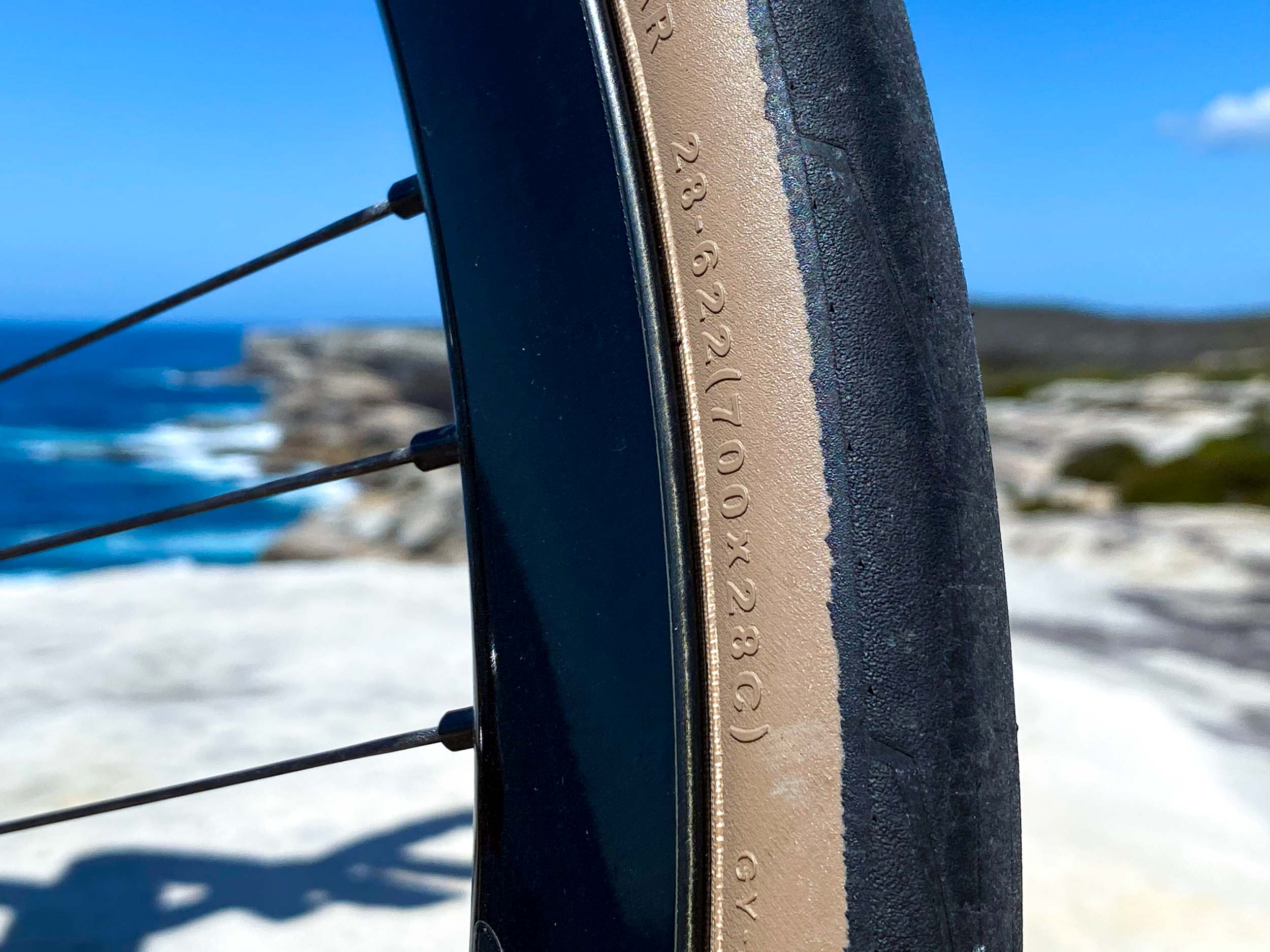 With tan sidewalls the 28mm Eagle F1 are not tubeless ready, rather Goodyear describes it as ‘tube-only’.

These are direction-specific tyres, featuring little V-shaped grooves for the tread pattern. It’s not prominent but the grip is impressive. Much of my riding has been done on dry roads but there have been a few adventures in the wet and I’m happy to report a very positive experience. 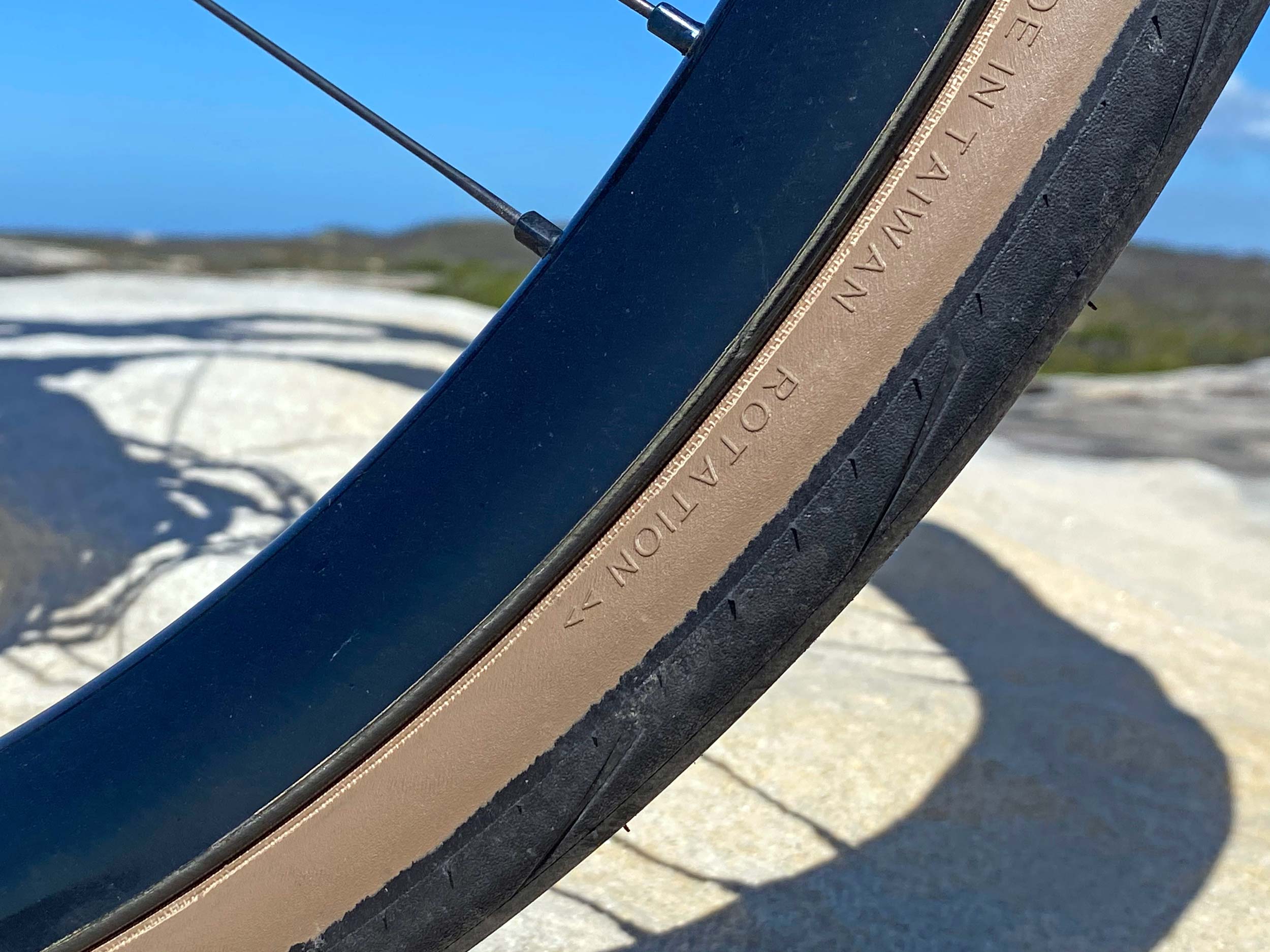 The recommended pressure is higher when compared with the tubeless option and when I started this review, I banged in 80psi similar to what I’ve been riding with Pirelli tyres for the past year. At 64kg, this pressure is probably too much but old habits die hard.

It wasn’t too long ago that tyres were 19mm and the manufacturer suggested pressures of 100-120psi (even 130), but cycling’s evolution continues and the old-school thinking of the 1990s seems positively ancient in 2020.

These days it’s all about bigger tyres, less pressure, no tubes, extra grip, direction-specific… and aesthetics.

After the early rides, the pressure dropped (deliberately, as part of the test) but the tyre feel remained the same. There isn’t a new-tyre sheen that fades, and there isn’t any dramatic wear either. At times I rode as low as 55psi (just as an experiment) but found my zone around 70psi.

(I also rode the tyres reverse, just to see if I could note the directional influence, and it is different. More fidgety, for want of a proper description. That experiment only lasted a short while.) 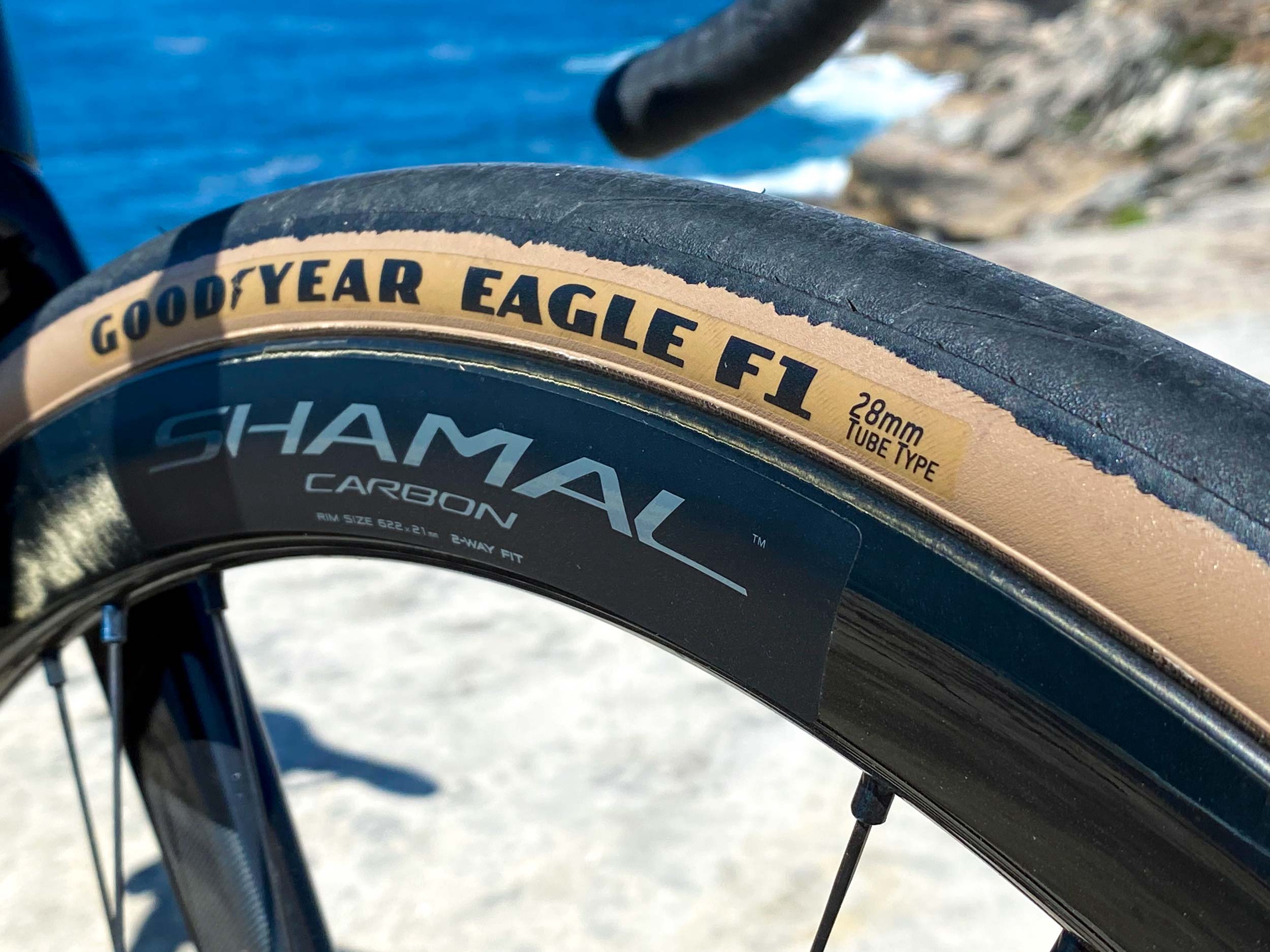 The tube-only option of the Eagle F1 (ie. with tan sidewalls) come in either 25mm or 28mm options.

Tan wall is on trend and that’s part one of the Goodyear test but there is also a tubeless-ready all-black Eagle F1 offering (also AUD$89.95, below). 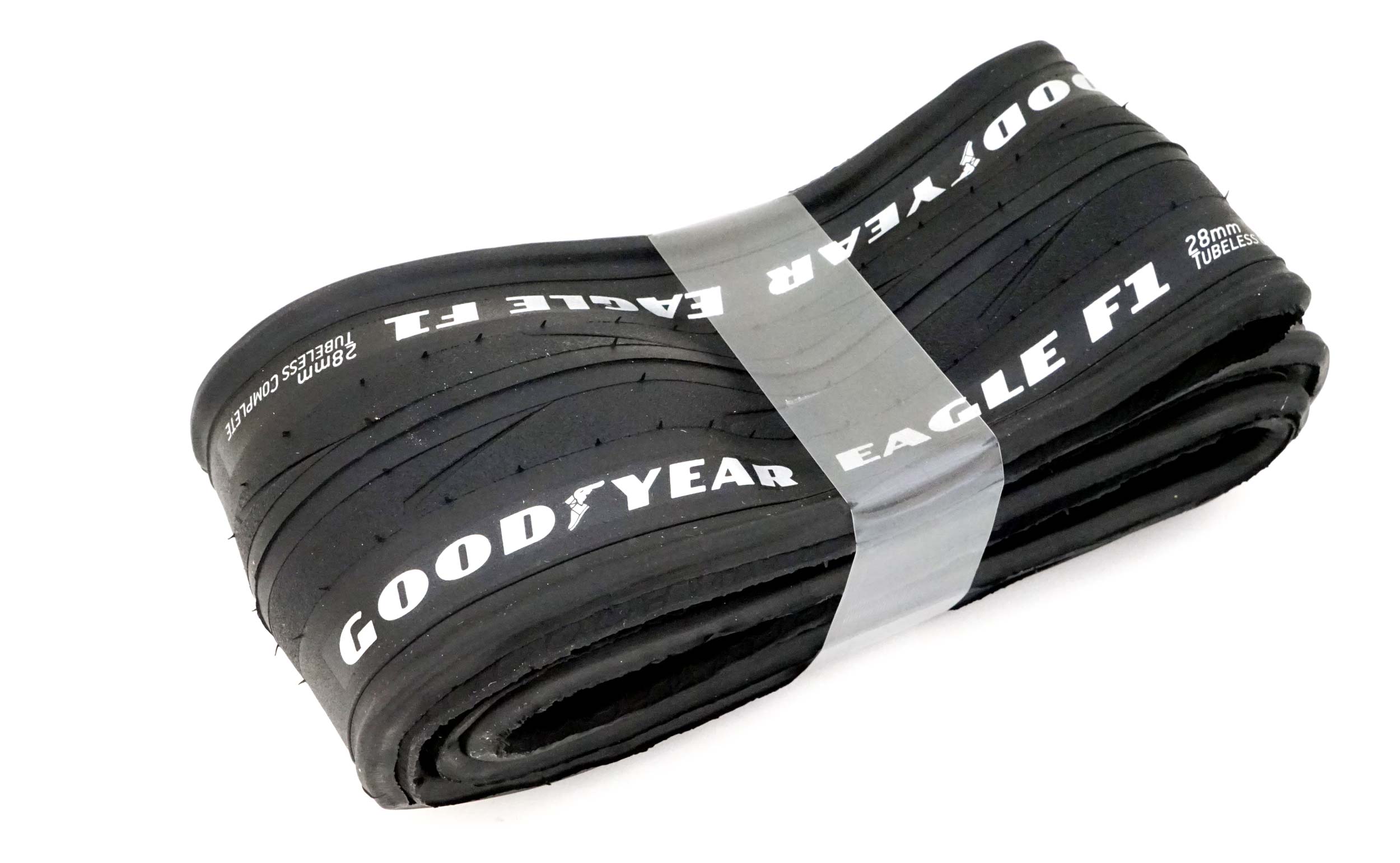 Fitting was easy with a minimum amount of wrestling required to get the Eagle F1 tyres on Campagnolo’s recently release disc brake Shamal wheels but the finish off the Goodyear centre strip leaves a little to be desired.

The ragged edge of the black centre rubber doesn’t affect performance but it can get distracting while riding; look down at the tyre and, as it’s spinning, the centreline wobbles from one side to another… it is a minor concern but I mention it because you too are likely to notice it.

Also, the black on one of the test tyres was considerably off-centre. It’s not a grievance, just a comment. 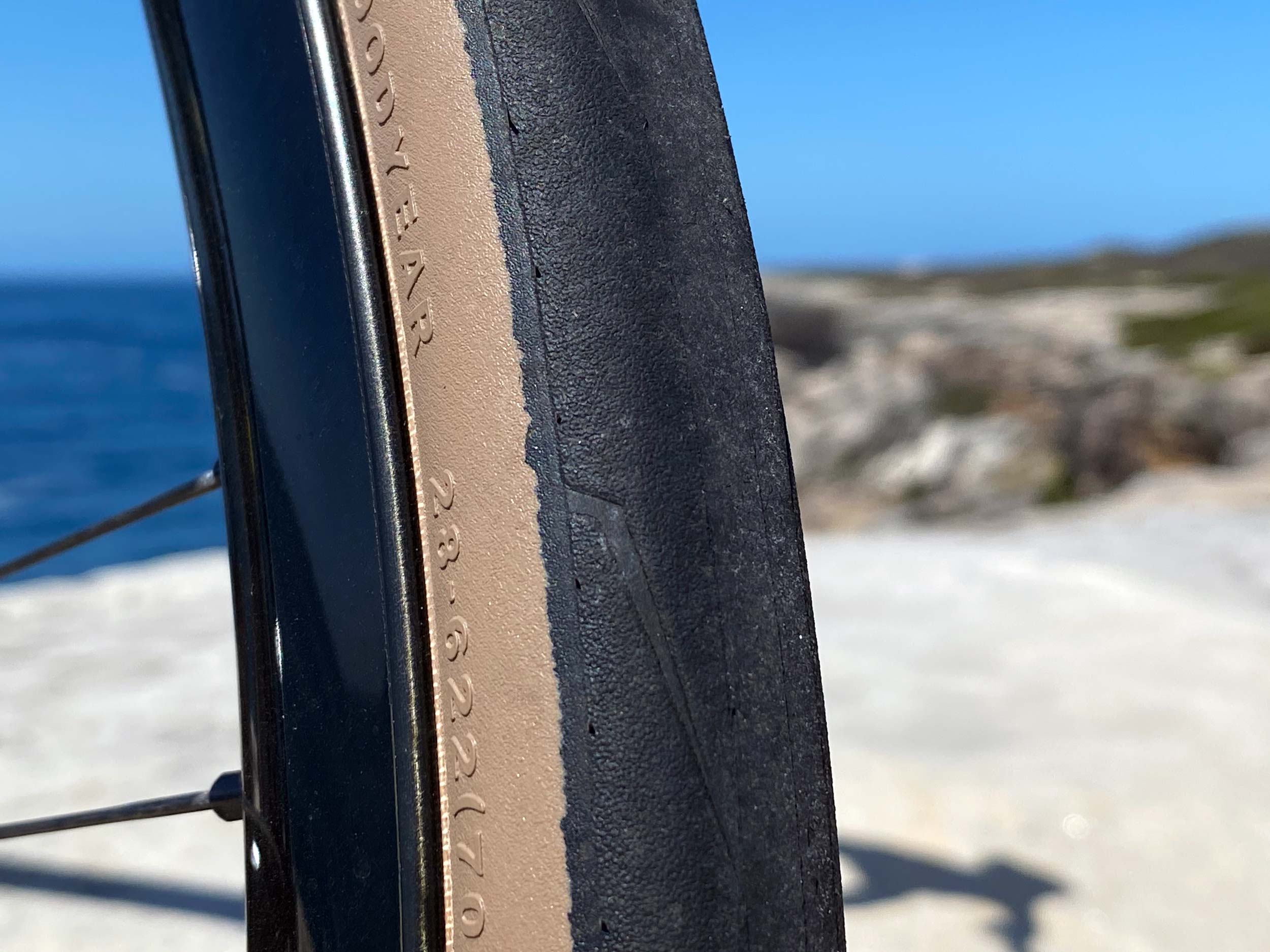 This test of new rubber come after a long time on Pirelli tyres. I’d been using 26mm Cinturato, then went through a sequence of changes with test bikes and new wheels. Bontrager R4 320 (25mm), Continental GP5000 (32mm), and a few in between… with more stacking up for testing.

It feels strange to pull perfectly good tyres off a set of wheels that they match very well. I’ve been very happy with the combination that I’ve had for the past month and believe the tyres have got a fair bit of life in them yet. It’s been a puncture free stanza, always a good thing, but it was the control and assurance of the tyres I like more than not having to repair a flat.

So far, in an ongoing exercise of tyre comparison, the Eagle F1 with tan sidewalls offered the strongest grip sensation: more lean in turns and a lot of fun to ride, without feeling at all worried.

The fat Continentals (32mm) are great fun but if I went smaller the Goodyear would be high on my list. And I think I’d rather these than be bigger all the time.