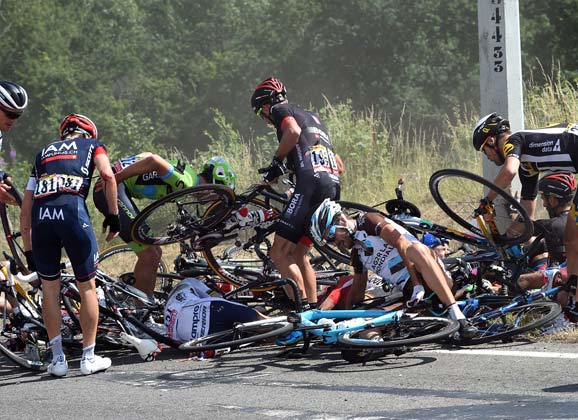 Chris Froome is back in the lead of the Tour de France but the main talking point of stage three is the nightmare of the crash. 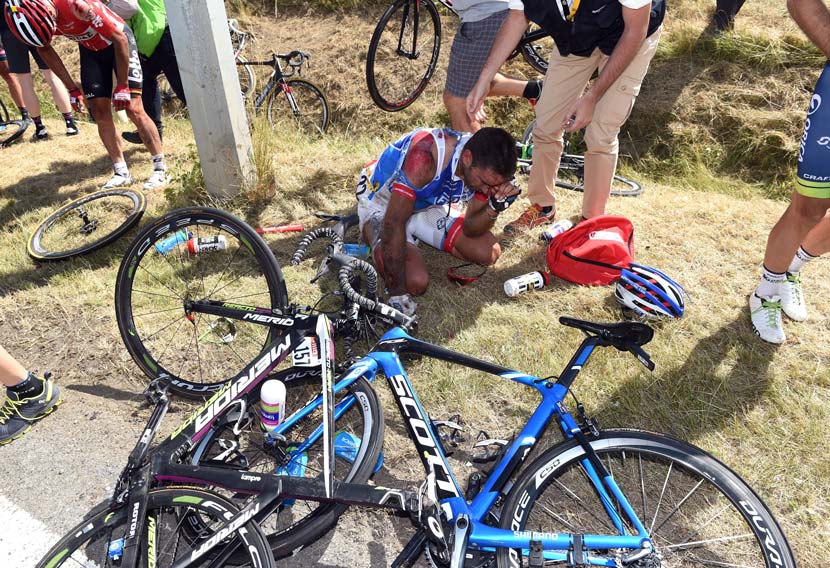 How did you sleep last night? Safe and sound, knowing you could roll over without weeping wounds sticking to the sheets? Or did you lie there, wondering why every time you closed your eyes you saw That Clip again… and if it was just a nightmare sequence that could all, somehow, be undone?

It doesn’t take much to change the entire script of a race like the Tour de France. A micro-second is all it takes; one second they’re speeding along at over 70km/h, the next, they’re splattered over the ground in a pile of bodies and bikes.

They are professionals: cyclists paid to race their bikes. But what we saw on the road to Huy offers another opportunity to roll out the clichés about modern-day gladiators, and “forçats de la route”.

These “slaves of the road”, were back in the arena on Monday for stage three of what is already a remarkable contest. There’s been impressive athletic endeavour in the heat on the streets of Utrecht, and tactical survival in the wind and rain on the way to Zélande. And next was to be the moment for the climbers to show how they will impact the overall standings of Le Tour 2015.

Before the Mûr de Huy, before ‘Purito’ sped forward and onward to victory ahead of Chris Froome, was The Crash.

We know the drill of the Tour well enough to understand that crashes happen. There’s repetition in the commentary from every rider, directeur sportif, and commentator alike: ‘the first week is nervous’, they like to say. ‘Stay up front and keep out of trouble…’ and so on.

But this is the Tour. There’s a lot at stake.

The micro-second when William Bonnet moved slightly to the right near the front of a speeding peloton cannot be undone. He did touch the wheel in front of him, he did crash to the ground, and he did set off the sequence that has changed the Tour. And it’s not a nightmare, it’s reality: bleeding, broken, torn, nasty, rotten reality.

For some it was immediately over. The obvious injuries insisted that they stop, there and then, with the ambulance and medicos nearby to tend to their wounds. There are the four denoted with ‘DNF’: Bonnet, Simon Gerrans, Tom Dumoulin and Dmitry Kozontchuk. They did not finish. They could not finish.

We know why. We’ve seen the accident… again and again. And even though it’s shocking, most of us replay it again and again just to be sure: it did happen. It’s not a dream sequence. The nightmare is real.

The on-bike footage shows how it happens: at these speeds, in such close proximity to other riders, with an arena that spans over 3,000km of bitumen, there are bound to be accidents.

Crashes aren’t new to the Tour de France. It’s part of racing but when the significant entourage of medical support cannot cope with the demand, you know it’s no ordinary incident.

“It looks like a casualty ward in the bus,” said the Orica-GreenEdge team owner, Gerry Ryan. Like everybody else at the finish an hour-and-a-half after racing resumed in stage three, he was surveying the scene and shaking his head in disbelief.

We know how it happens but, at the same time: how did this happen?!

“It was just a simple clip of the wheels and everyone came down,” stated Ryan, summarising what we all knew. “We’ve been hit pretty badly. But hopefully there are still some fit riders and hopefully some more chances.

“Hopefully the boys can recover quickly and get back to their profession.” 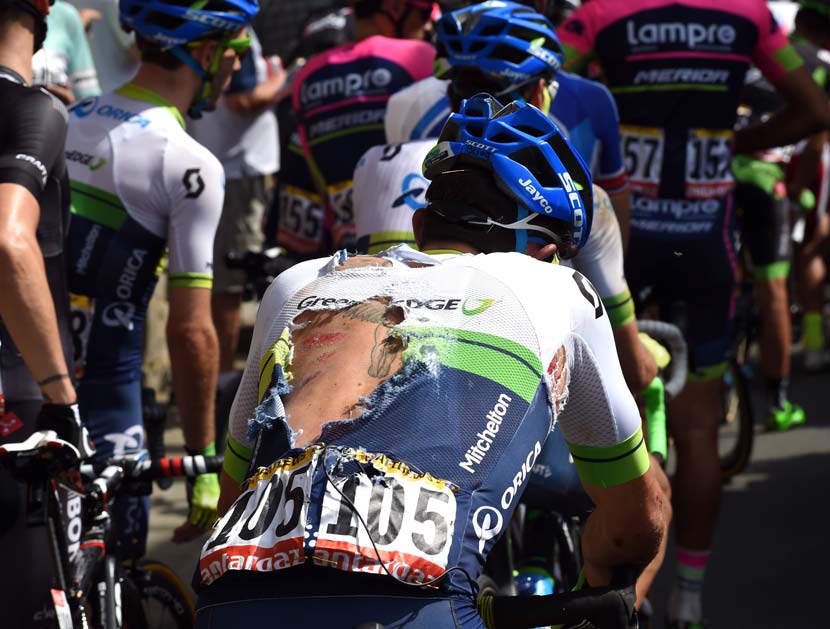 Michael Matthews, one of many who arrived at the finish of stage three broken and torn…
Photo: Graham Watson

The OGE guys lost their leader, Gerrans is out with a fractured wrist yet another broken bone is a season punctuated by crashes and breaks and bad luck. Time and time and time again… but he’ll bounce back, right? That’s what they do. They’re professionals. They’ll get stitched back up, pinned together, and somehow find their fitness again and race another day.

“We questioned it at the time,” said Ryan about the neutralisation of the stage after the crash, “but they didn’t have any medical left and it was like a battle field out there so it was a great call.”

This was no ordinary crash. The UCI has a rule written into its regulations that allows for the race to be stopped when it’s simply too unsafe to continue.

In the end, 194 riders would push on through, up the wall at the finish and onward to a night of shaking their head while watching a screen and thanking their lucky stars that they actually survived.

There will be several DNS denotations on the results sheets today. We know Fabian Cancellara is out, the rider who carries the title of ‘The Gladiator’ with pride can carry on no longer. It’s his third abandon from the Tour, each time not because of a DNF but because of a DNS. He would reach the finish in Huy but he would be finished. Fractures to vertebrae will do that to a bloke. 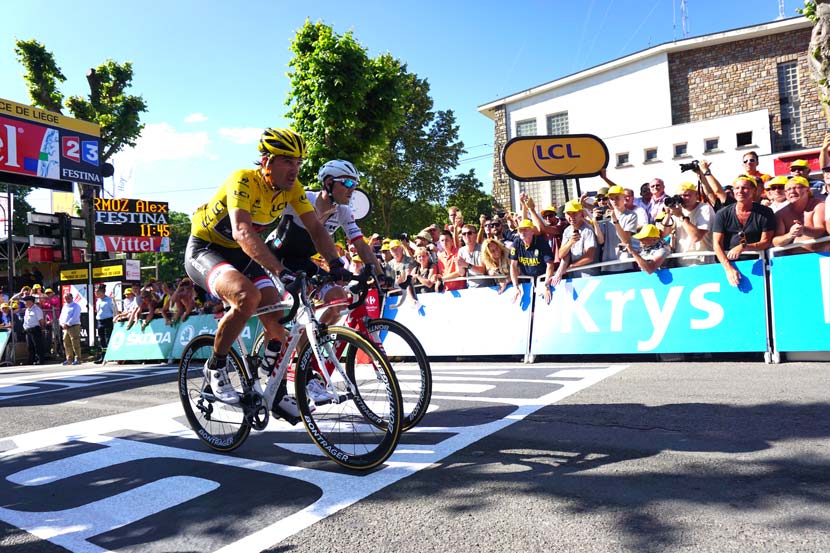 Cancellara would get to the finish but announce afterwards that he won’t start stage four.
Photo: Jack Lynch

Slaves of the road, indeed! Many will continue but it will be survival for a few days and the effects of their injuries will hinder their hopes and destroy their dreams. But they’ll keep on riding, often saying it hurts less than walking.

Gerry Ryan’s team has been hit hard but so too many others. Gerrans is likely to be joined in the ‘abandon’ list by Daryl Impey and Michael Albasini – at least that’s what was said late last night as the medical reports were filtering in. Michael Matthews was also hit hard, finishing last in the stage missing plenty of skin and a lot of his spirit. It’s hard to find motivation when you’re stuck to the sheets.

The race continues but it’ll be missing some stars of the show. Next up, ‘the cobbled stage’ – anticipation built around what could potentially be a dangerous race over roads that were built in Roman times and, these days, are essentially only used by tractors and gladiators.

You don’t want to see what happened yesterday, but surely you’ll be compelled to watch today. Sport’s a funny thing.