There is a mix of hope and disfunction in the Australian Cycling Team. Is the campaign for the Tokyo Olympics being managed in a way that will provide a winning edge? 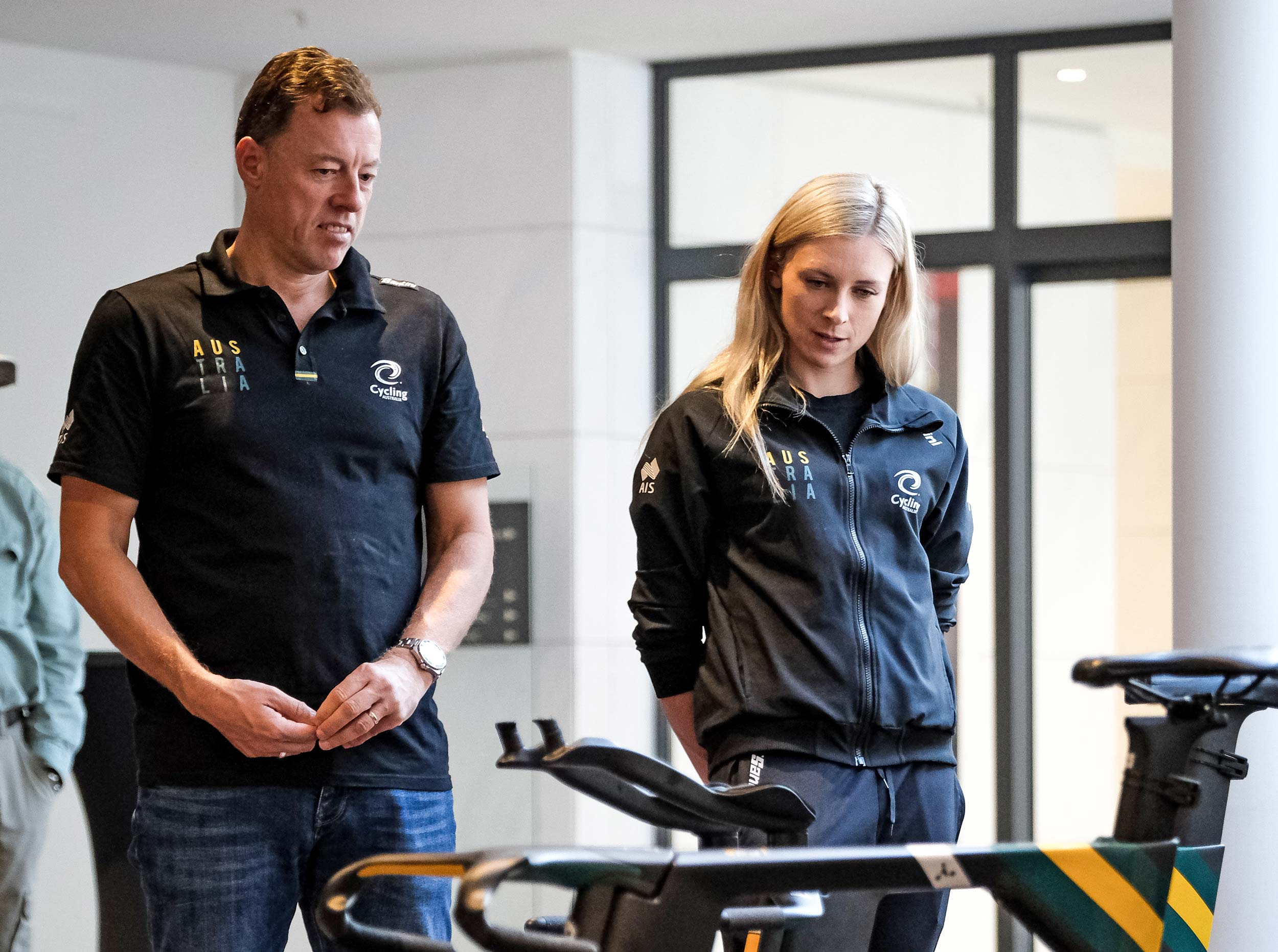 Simon Jones and Netti Edmondson admire the new track bikes of the Australian Cycling Team on the eve of the world championships in Berlin. (Photo: Peter Svendsen Ebro, Argon18)

“Australia has had a pretty glittering history of winning world titles,” says Simon Jones in his formal appraisal of the 2020 track cycling world championships which concluded in Berlin on Sunday.

“In 2017 we won more world titles than you could poke a stick at,” continued the Australian Cycling Team’s performance director. It’s true, to an extent.

Three years ago, Jones was just starting his job. He had gone to Hong Kong largely as an observer before plotting an entirely different course for Australia’s highest-funded elite cycling program.

At the worlds in 2017, Australia won 11 medals, three of them gold, five silver and three bronze. It is possible to poke a stick at them, but what would be the point?

A more pertinent question relates to the sentiment of the next line in Jones’ summary of the worlds in Berlin. Talking about how the team was successful at the 2017 championships, a month after he was appointed Cycling Australia’s high-performance director, Jones concluded: “That is not what we are trying to achieve this year.”

And so, we can conclude, winning world titles isn’t the objective of the national team. 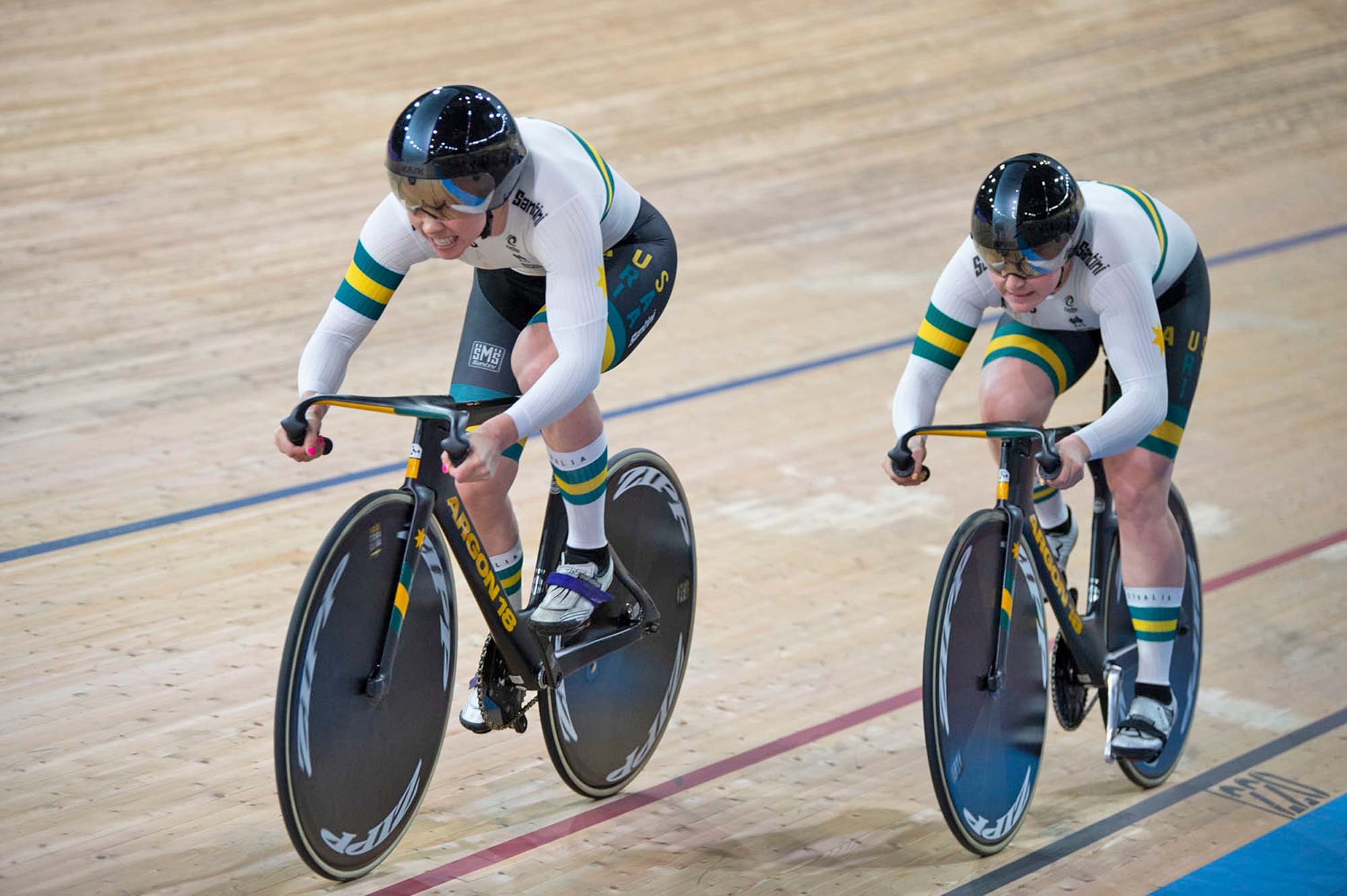 Kaarle McCulloch and Steph Morton, on their way to another world championship medal in the team sprint. Last year it was gold, this year it’s silver. (Photo: Casey Gibson)

It’s odd, and Jones is stating the facts as they relate to him and the job he was hired to do. Unfortunately, he’s still focussed on the outdated, ill-considered notions of the so-called ‘Winning Edge’ ‘strategic plan’, John Wylie announced back in December 2012.

“Our new high-performance strategy, called ‘Australia’s Winning Edge’, proposes simple but far-reaching changes in how the Australian Sports Commission (ASC, now ‘Sport Australia’) will invest to improve our international sporting performance for the next decade and beyond. And change is essential,” declared Wylie back in 2012.

“We all know and love the fact that Australia is a proud sporting nation,” Wylie continued.

“We have achieved beyond expectation for many years, based on our ability to unearth, develop, and support champions.” But the program was doomed. 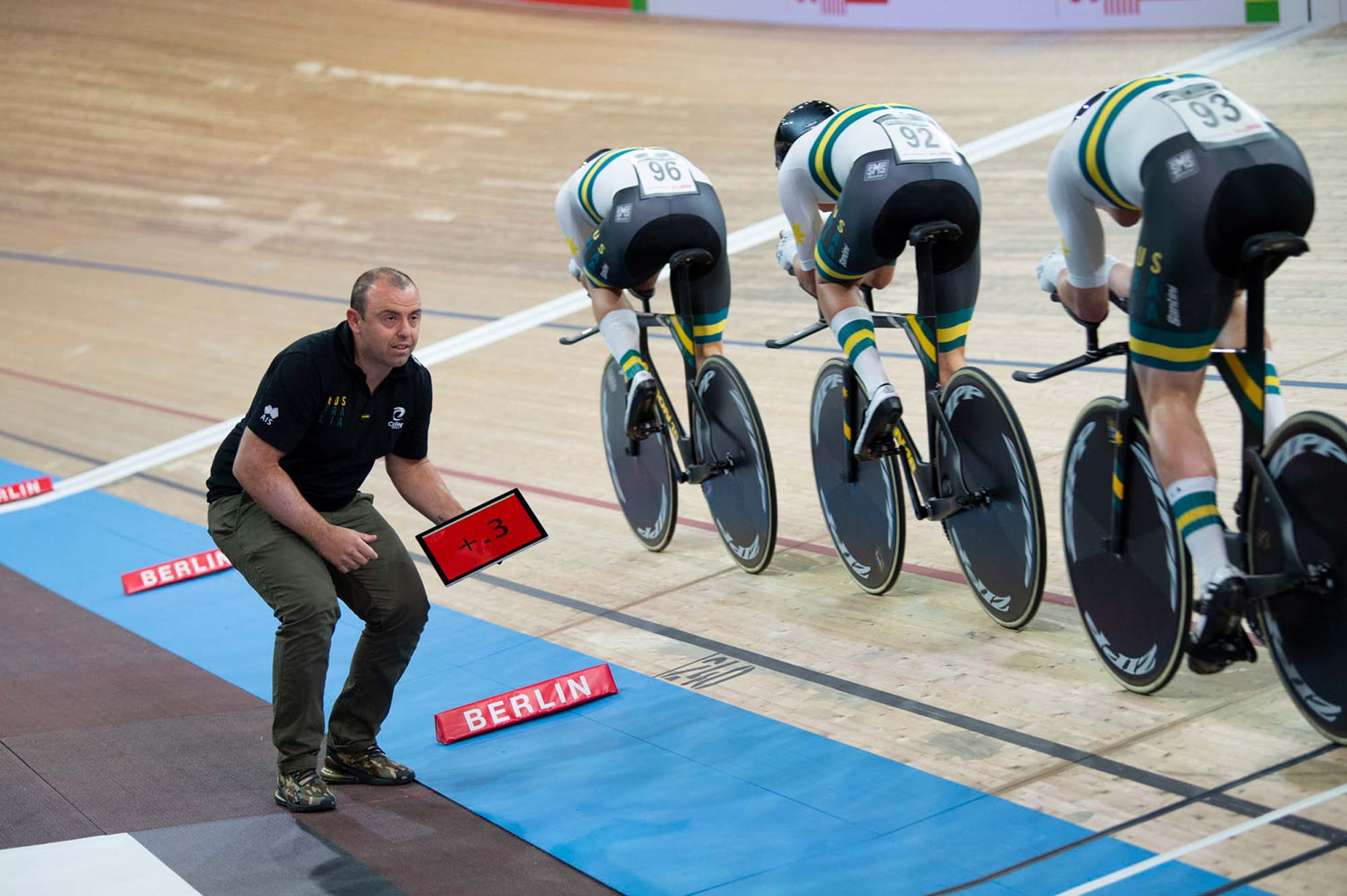 Palmer is now gone. The AIS is in a state of flux. Sports funding in Australia is earning a lot of commentary, very little of it with a positive tone. And the 2020 Olympics themselves are in doubt because of the impact of coronavirus.

But Jones is steadfast with his approach to how the Australian Cycling Team conducts itself, even after the world championships in Berlin, the first time in 12 years when no Australian rider won a gold medal.

Never mind the worlds, is Simon Jones’ sentiment. “We want to win in Tokyo,” he insists, again. 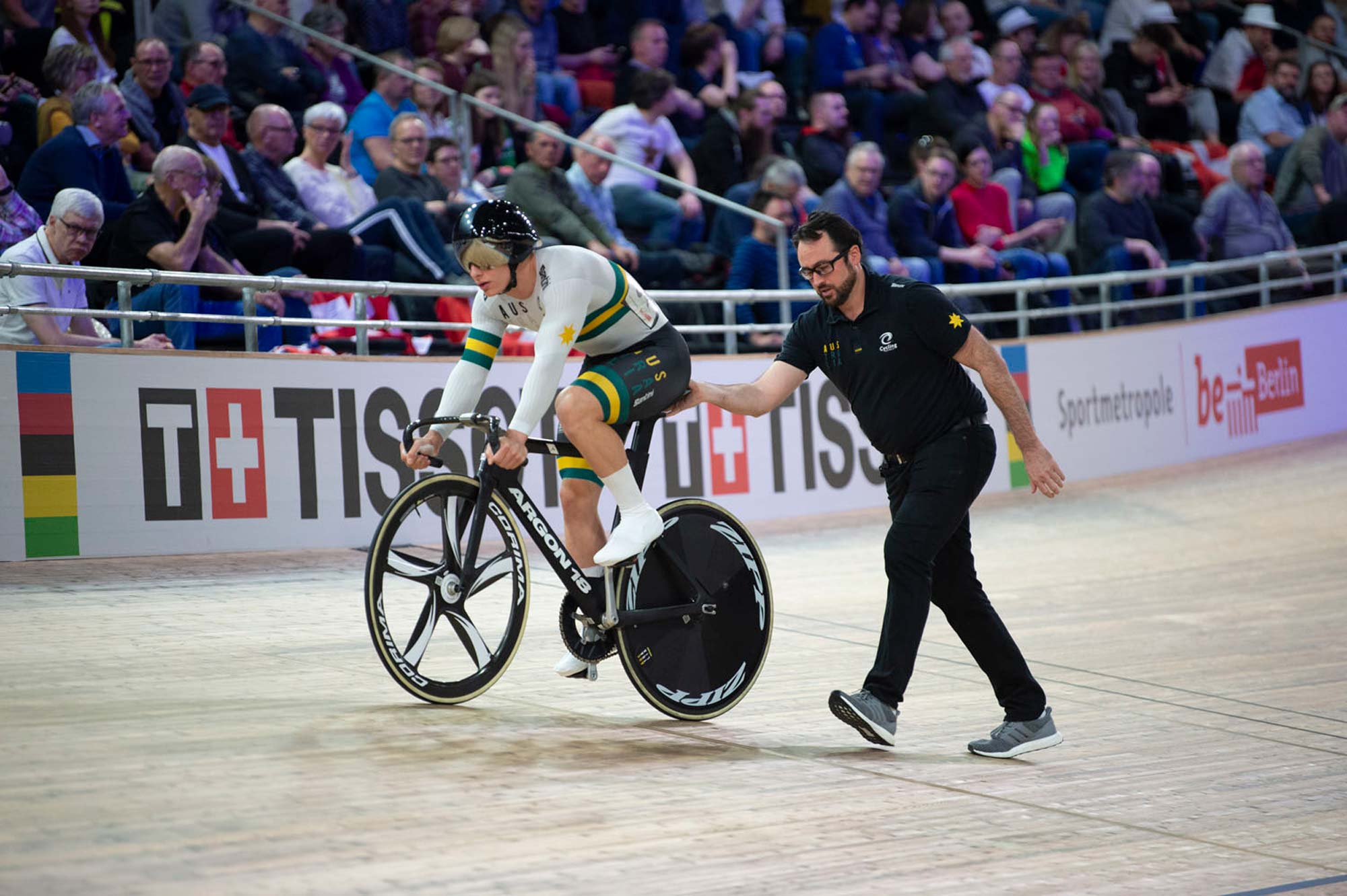 The worlds in Berlin offered a dress rehearsal for the Olympics in Tokyo, complete with testing of new bikes and a range of products… eg. a five-spoke Corima front wheel, despite the Australian Cycling Team having a partnership with the makers of the rear disc wheel, Zipp. (Photo: Casey Gibson)

It has been a while since I’ve written about Jones. And even longer since I’ve spoken to him.

After the Australian men’s pursuit team’s record-breaking ride at the worlds in March last year, I sent a congratulatory text but never heard back. In December 2019, when a World Cup was contested in Brisbane, I sent another note with praise for the performances of the Australian team. Again, he didn’t respond.

Our last actual communication was back in February 2018. I approached him at a café in Geelong on the morning of the Cadel Evans Great Ocean Road Race, after having been told by someone at Cycling Australia that he wanted to talk to me, but his reaction suggested otherwise.

“I’ve taken offense at what you’ve written,” he told me in Geelong a few years ago, “and I don’t want to talk to you anymore.”

He explained that a column I wrote about him sending a team of only four riders to the worlds in 2018, denying the likes of then-IP world champion Jordan Kerby and the pursuit teams the chance to defend their world titles, was an “emotional reaction”.

I suggested that his subsequent reaction was also an emotional one. But he wasn’t interested in listening. He’d made up his mind, and he didn’t want to talk to me anymore. We’ve moved on… albeit without any further contact, save the few text exchanges explained earlier. For me, writing about Jones is not usually worth the angst that follows, but the time has come again to question his approach. 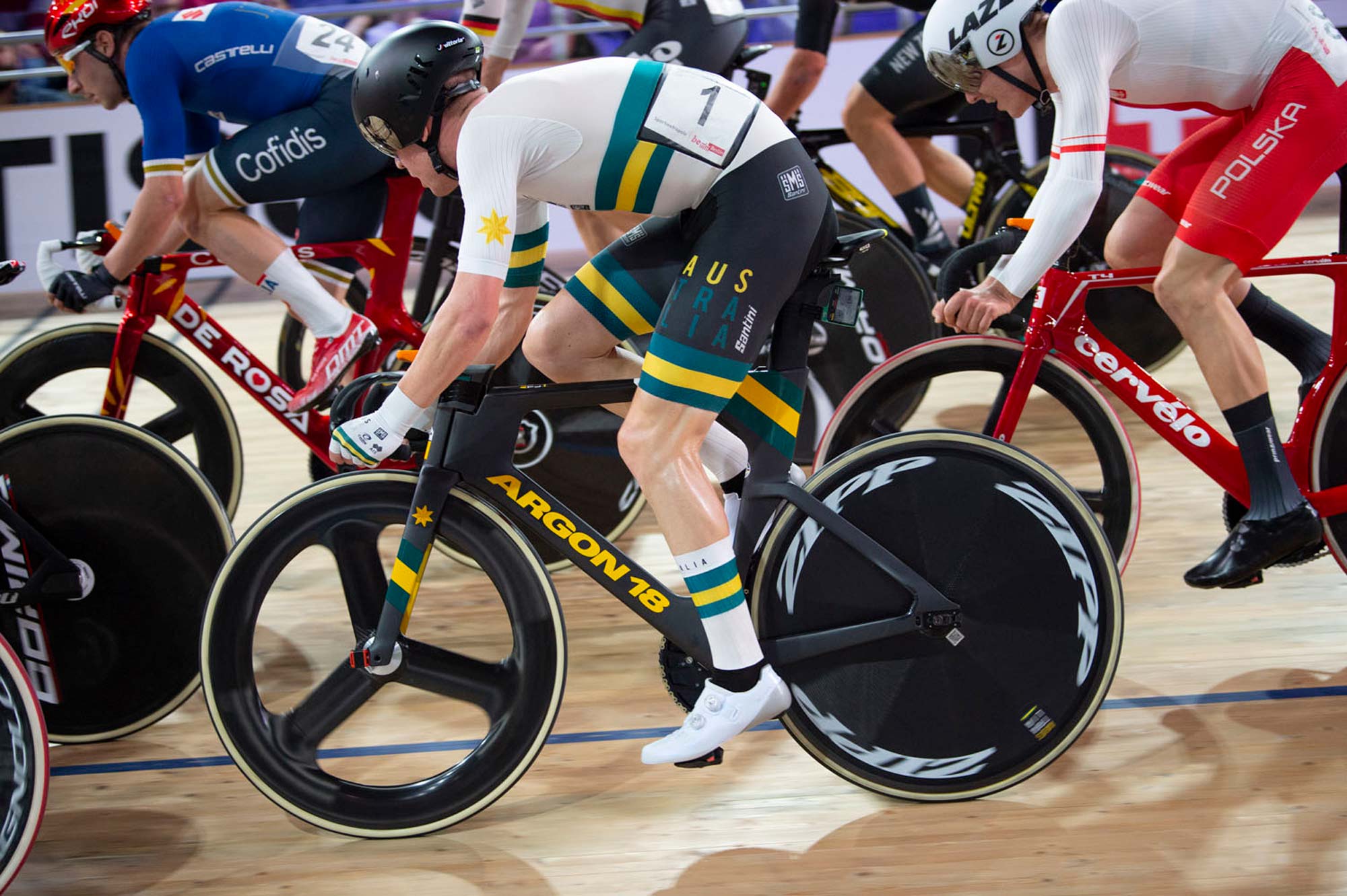 Not this time… Cameron Meyer didn’t enjoy success at the worlds in 2020. (Photo: Casey Gibson)

In the official release issued by Cycling Australia yesterday (the source of my quotes from Jones), he went on to explain the fall-out from the championships in Berlin.

“Yes, we were aiming for podium performances here,” he said about the 2020 worlds, “and you can’t hide the fact we have come up short in some areas. But we have to learn from it.

“We tried several different things here, and we have to settle on a plan and then train to it.

“Now we have finished this period. We gave everyone opportunities, and now we have to gather the facts and make some decisions.”

There were 17 athletes representing Australia at the worlds last week, 13 more than in 2018, Jones’ first full season in command.

Back in 2018, despite only sending four riders – Stephanie Morton and Matthew Glaetzer for sprint events, and Cameron Meyer and Callum Scotson for endurance events – Australia finished fourth in the medal tally: two gold, two silver, two bronze. Every Aussie won at least one medal; with Meyer claiming (yet another) points race title, and Glaetzer defending his sprint crown.

You could say it debunked my conclusion to the article that stopped Jones from talking to me. I rounded out the story about sending only four athletes by stating: “This is cycling in Australia in 2018. What a great shame that it has come to this. How embarrassing.”

That was, of course, the same year that Australia hosted the Commonwealth Games. And there were plenty of conquests to come for the event Jones had prioritised, so it’s normal to be mindful of making conclusions about what happened in Berlin last week.

As Jones points out: “There are five months to the Games, which is a long time.”

At this point, although there is consideration to the contrary, we should expect that the Olympics will indeed go ahead in 2020.

Pointing to a trio of talented young riders, Jones saw a silver lining in the dark cloud of a poor showing in Berlin. Maeve Plouffe, Luke Plapp and Tom Cornish moved up to the elite tier, graduating from the so-called ‘Podium Potential Academy’.

“They also provide upward pressure, and that is really good to see.” 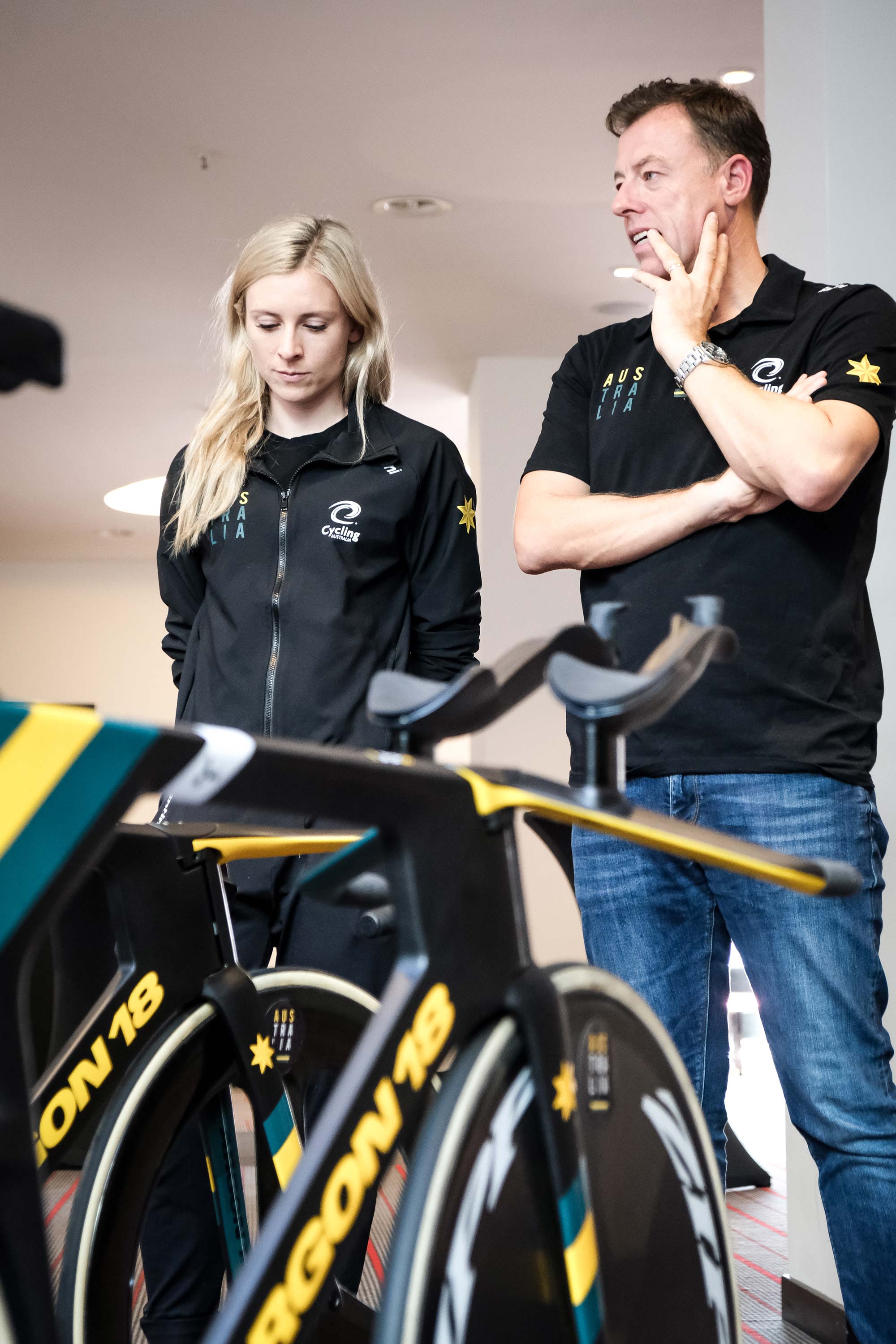 One man, too much power?

The world championships were not the priority of the Australian Cycling Team in 2020 and it’s natural that Jones would take his cues from another nation that has enjoyed considerable Olympic success recently. Team GB has traditionally offered relatively mild performances at the worlds of 2008, 2012 and 2016, but then dominated the track events at subsequent Olympic Games.

Jones is schooled in that line of thinking and we (patiently) wait to see if this will pay off in Tokyo later this year. If it does, he’ll rightfully gloat about his approach.

If it goes awry, however, it’s time for him to go.

Despite my personal grumbles about the way Simon Jones conducts himself, I recognise that he is only responding to his job description which was, alas, issued at a time when the lame ‘Winning Edge’ policy was still being enacted.

He was employed to try and get Australian cyclists to improve on their performances after the Rio Olympics. Hopefully we’ll get to see if he reaps the reward he has so stubbornly pursued – with, it should be noted, considerable taxpayer funding.

For now, however, we can point to the release issued after the championships in Berlin and try to see the good from a bad situation.

Being beaten by a team that rides a 3:44 pursuit isn’t anything to be ashamed about.

Steph Morton earning yet another couple of sprint event medals confirms that her speed and experience are assets.

The absence of Glaetzer for sprint events and Kell O’Brien for endurance races hampered Australia’s chances in Berlin. Both are expected to overcome illness and injury in the coming weeks.

And, above all, the priority given for July/August, rather than February/March suggests that better is yet to come.

But the overriding concern is that Jones was given the power that he doesn’t deserve; or, rather, that he cannot manage on his own. And the responsibility for this dates back to late-2016, early-2017 when the high-performance job was advertised and a contrived interview process took place.

Jones eventually got the nod but, in time, some of the bizarre circumstances surrounding other applications for the job may come to light.

The reality is that there should be a formal review of how it came to be that so much power was given to one man. Should it come to that, there will be some nervous administrators being asked questions…

Frankly, I doubt a review will ever take place because, even if it did, few really care enough to raise their concerns with anything more formal than an arbitrary rant on social media.

For now, there is an equal mix of hope and disfunction in the Australian Cycling Team. At least one key member of the HP unit Jones had assembled has had to leave Australia with visa issues. Another coach with considerable credentials has been distracted by the birth of his first child only a fortnight before #Berlin2020. One of our most accomplished track cycling coaches is dealing with the effects of injuries from an accident that required brain surgery… these are not ideal circumstances when striving to win world titles. But they are part of the Australian campaign this year.

Meanwhile, Jones remains at the helm with his single-minded approach to what’s required from the Australian Cycling Team: Olympic gold remains the quest. We wait to see what comes of #Tokyo2020 with great interest.