Jack Bobridge on the hour record attempt (part one)

Three days before Jack Bobridge attempts to become the first Australian to break the world hour record, he spoke to Rob Arnold about the challenge that lies ahead.

In part one of a two-part series we discuss the requisite wattage for the hour record, how his emphatic ride in the Tour Down Under will serve him for the next quest… and what traits his Cervélo track bike has.

– Find out more about his bike for the hour record ride. – 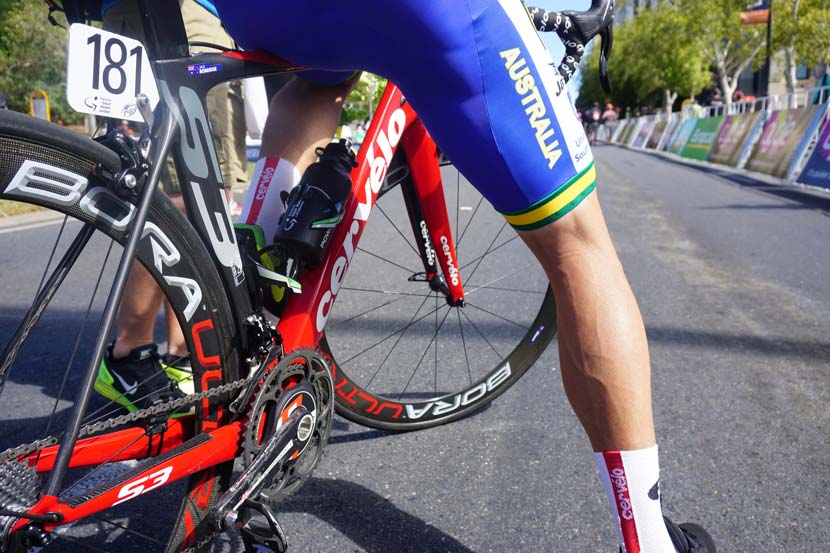 The legs of Bobridge moments after the final stage of the 2015 Tour Down Under.
Photo: Rob Arnold

– Click the Soundcloud file to listen to the exchange and/or read the transcript of the interview below. –

RIDE Media: I’m sitting in an office in Sydney getting ready to go down to Melbourne on Saturday [31 January 2015] to watch Jack Bobridge try and break the hour record. I’ve got him on the phone. He’s had a session at the track, a session on the road earlier today. And, with just a couple of days to go Jack, how are you feeling?

Jack Bobridge: “The last few days have been pretty mellow, pretty quiet for myself with a few, rare easy road rides but it all seems to be going well. The legs have recovered pretty quick – obviously I’m still a little bit fatigued and tired from the Tour Down Under but today’s track session this afternoon wasn’t much. It was just looping around but that felt really good, so it’s a good sign of what’s to come hopefully on Saturday.”

RIDE Media: We saw a lot of you on display at the Tour Down Under. Obviously, you win on the opening day and then spend some time in the leader’s jersey and your team is on the front and you’re showing yourself. But then, that day to Willunga, you really turned yourself inside-out to make sure you got the climbing points. How do you pull up after that? And was that part of the training regime for the hour?

“Obviously it did seal the KOM jersey up to a point but, at the end of the day, it is a week out and I’m starting to know my body pretty good now and I think, if anything, it’ll do well as I can recover and do the right things with massage and good sleep and get the training right up until Saturday night.”

RIDE Media: Can you just give us an example of what you did today, the Wednesday before the Saturday that the hour is on and it’s also a couple of days after the Saturday when you were on the attack. [Today] did you watch power? Did you just have to roll the legs over? What was the regime today?

Jack Bobridge: “This morning I actually went out with Luke Davison. We are in Melbourne so we rode down to St Kilda for a coffee. It was a pretty easy hour-and-a-half, really cruisy… there were quite a few traffic lights but that’s not a problem. We just took off and were slow and easy.

“Then, this afternoon, we were down the track for 20 minutes just looping around with the four team pursuit guys – a bit of rhythm, a bit of small gear stuff, nothing too intense: just getting a feel for the team pursuit before tomorrow’s qualifying round. That will be my first solid little hit-out before Saturday.”

RIDE Media: So you can get a feel of the track. We’re talking a lot about time, so we want to know how the humidity is helping or the temperature is assisting – or not. Your world [individual pursuit] world record was done in exceptional circumstances on a hot day. It’s been very wet in Sydney, how has it been in Melbourne?

Jack Bobridge: “The weather, since I’ve been here on Monday, has been really good. It’s quite windy but the temperature is not too bad – in the mid- to low-20s. It could be a little bit warmer but in the [DISC] track today it felt quite warm.

“I think the conditions in there tonight are pretty fast. I just saw the teams pursuit women just do an Australian record – they went for it and they did 4:20, so they took two seconds off the record. That gives me good insight: the track is pretty quick if there are times being put out like that.

“Hopefully it can only get better and warmer in there leading into Saturday.”

RIDE Media: We can jump around a little bit from road to track but I just wonder, while we were referencing that day in Willunga… you were on the attack for more than an hour, so you’re getting a good idea of your [form] over that period which is very important for this coming weekend. What kind of power were you averaging for that period with [Greg Henderson] and then when you were on your own?

Jack Bobridge: “It’s hard to tell. I’ve got the data but I haven’t actually looked at it myself. It’s been uploaded to the sport science guys. I know I averaged, for the whole stage, about 325 watts – with zeros. So it was a pretty solid day really.

“If you were to pinpoint an hour out of there… even though it was hard, it was pretty consistent the whole way to the top of Willunga [Hill] the first time.

“It was definitely under the power of what I’ll have to do on Saturday but definitely a good indication that I’m going well and things are going to plan leading in.”

RIDE Media: So what power do you expect that you’ll have to generate consistently for the hour on Saturday?

Jack Bobridge: “At my weight at the moment, I’m going to have to average at least 375-380 watts to break the current record.

“It’s all just a matter of having to play with the numbers and how the legs are and what the conditions are like.

“I know the 52 minutes I did at the road time trial for the nationals, I had 385 [watts] average… so that was a good indication back then and I’ve done a lot since with Down Under and a bit more training.

“Obviously it comes down to whether I’ve freshened up and done the right thing leading in to Saturday but it was a good indication – even back then – to where I was sitting.” 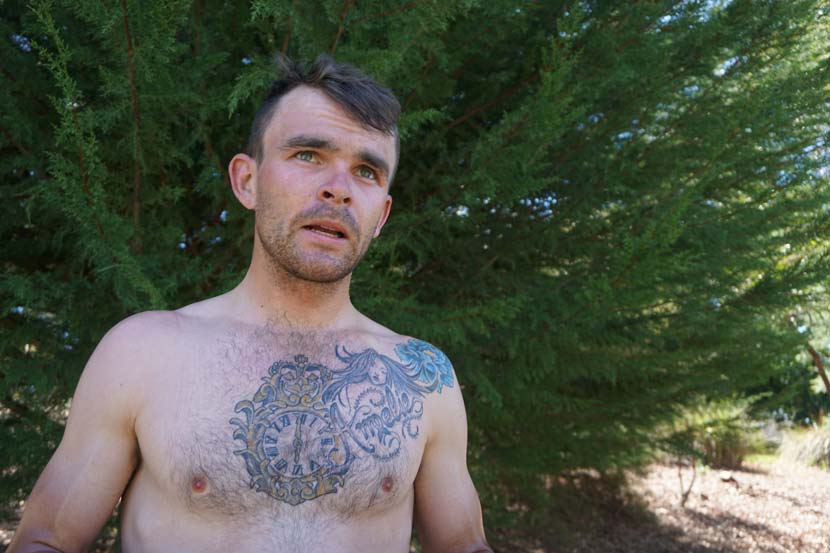 The moment, Bobridge took off the leader’s jersey at the Tour Down Under. He would surrender the lead of GC after stage three… and hand it to another candidate for the hour record, Rohan Dennis.
Photo: Rob Arnold

RIDE Media: And then you get on the track. How does it feel jumping onto a fixed gear and getting into the pursuit tuck?

Jack Bobridge: “Today was only a small gear which is obviously a lot different to riding a road [stage race] where you’re grinding in the big chainring for most of it.

“I think just getting back into the extension of the pursuit position… [was interesting]. I was actually on my team pursuit bike today, not the hour bike.

“Today I was on the BT and obviously Saturday I’ll be on the Cervélo. They’re set up a little bit differently but it was nice to get back into that extension and get the back stretching and the hips and the glutes thinking again in a time trial position.”

RIDE Media: Can you just go through the little changes in position from the pursuit to the hour [bike]?

Jack Bobridge: “It’s hard… there’s not a real lot different. Obviously, it’s a different frame. I think the Cervélo is a lot more relaxed frame than the BT. It’s a little bit different handlebar setup, obviously: BT have their own and, for the Cervélo, we’re running 3T so it’s more the slightly different angles of the bike. It’s more relaxed frame and probably a little bit more comfortable over one hour. I think that’s going to be the biggest change to anything.

“Obviously the team pursuit bike is a bit more aggressive in position and it’s a lot more rigid and twitchy for teams pursuiting but I think the Cervélo is going to be the perfect pick for the hour record.”

RIDE Media: But your position as you pedal doesn’t change, it’s more the frontal area. Not necessarily saddle height or behind bottom bracket or any of those measurements – they don’t alter, it’s just your frontal area?

“Position wise, it’s pretty similar to the pursuit bike so it’s more of a relaxed frame, it feels a bit softer and a bit more cruisy than what the team pursuit bike feels like.”

RELATED: Bobridge – before the hour (part 2): Arthritis, beer, family and dealing with praise