In part one of RIDE Media’s series on the Cervélo Caledonia in the workshop, Anthony Challinor from Velofix explains the basics of prepping a frame for a bike build, cuts the fork, routes the hoses inside the frame, and fits the proprietary stem.

Much has already been said about this bike. It rides very nicely and provides and stable, predictable handling on road and gravel. It looks great and has prompted a considerable amount of riding.

Over 1,000km have been covered already, and there is a collection of clips on RIDE Media’s YouTube channel that offer a range of insights into what went through my mind during the early adventures. Some of the commentary is insight about the bike, other videos are rambling, utterly impromptu observations about what I’ve seen – and what I’m thinking – while riding a lovely bike.

– Click the images above for more from the #ProjectCaledonia series. –

It’s all part of a bigger project. This is more than a bike review, it’s a collective of posts about a frame, a groupset, wheels and other components – and there’s also a fair bit about me… the rider/reviewer.

After many years of reviewing cycling products, I’ve got plenty of experience but also a strong desire to escape the usual way of explaining bikes and how they ride. Although my plan is to hold true to what RIDE Media has always done for readers, and provide as much information as possible about the products I get to ride, I’ve also decided that it’s okay to have a bit of fun. 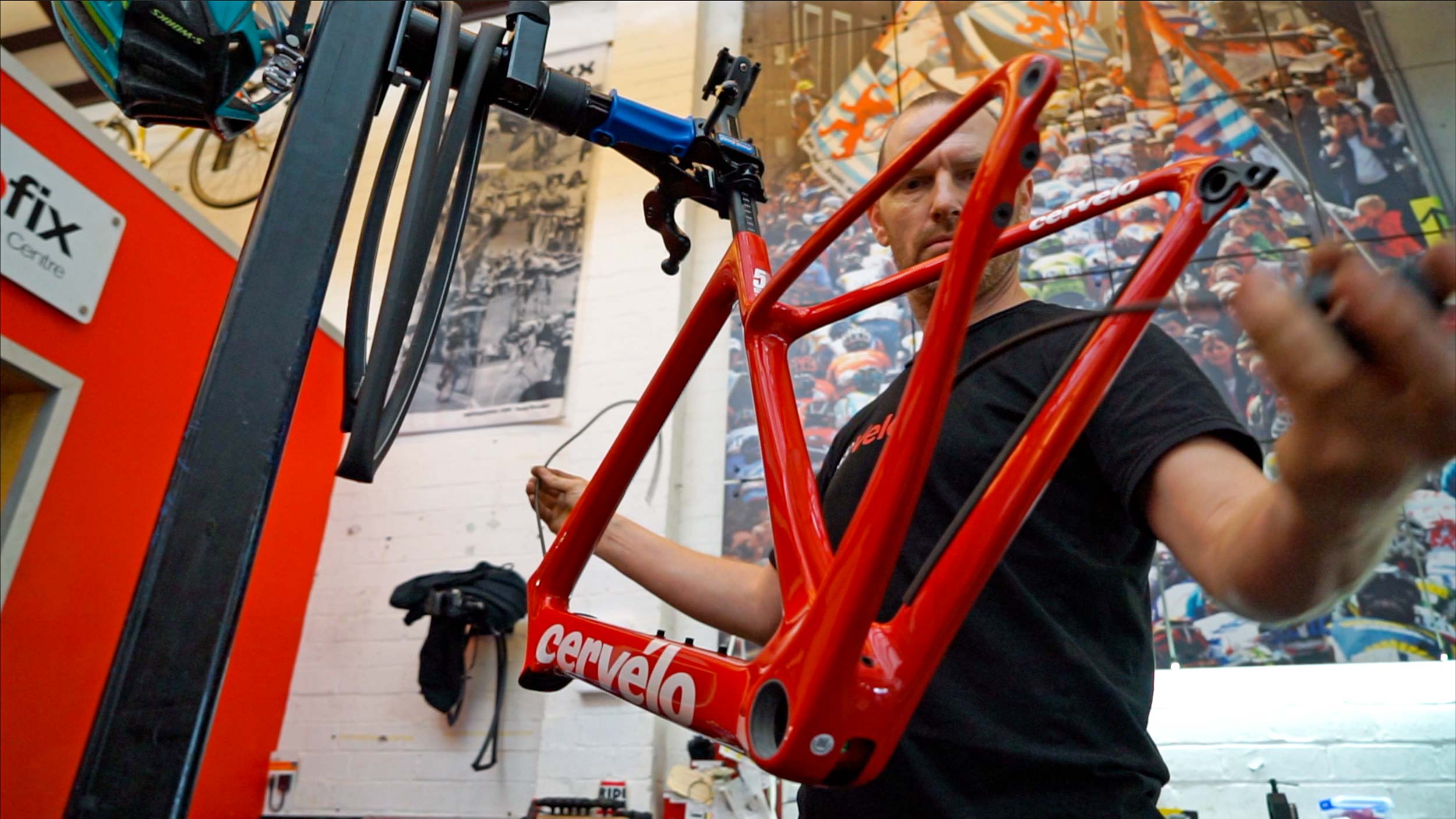 In the first video from the #ProjectCaledonia workshop series, Anthony assembles the frame, fork, and stem.

Buying a $6,400 frameset (which includes the series 5 Caledonia, fork, stem, handlebars, seat post, computer mount, camera mount… and sundry fittings) is serious business. It’s a considerable investment and you want to know that the bike is right for you. But bike riding is fun. And the Caledonia provides a catalyst to seek some adventure, explore a little more than you may ordinarily do on a road bike, and do so in comfort and with a smile.

It has been a pleasure to take the Cervélo beyond my usual routes around Sydney and thrash it a little on the fire trails of the Blue Mountains. 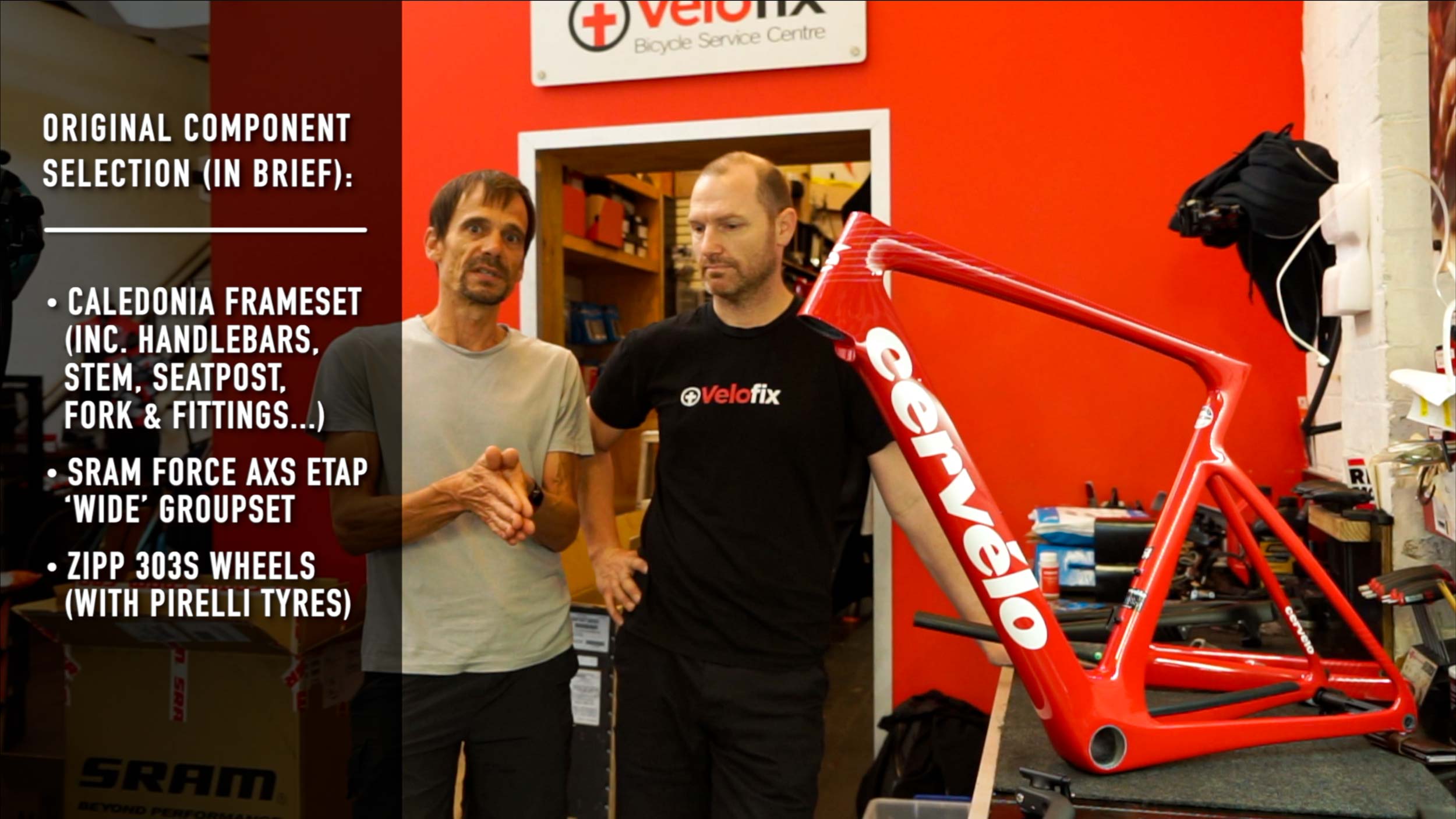 The original spec of the #ProjectCaledonia bike is essentially: Cervélo frame and proprietary parts, plus a SRAM Force AXS ‘Wide’ groupset, Zipp wheels, Pirelli tyres and an Astute saddle. That’s how it was when wheeled out of the workshop, but changes have already been made…

You can watch videos of my riding adventures (in a growing Ride-Review-Rant series) on the Cervélo Caledonia and there is also a collection of workshop videos, which explain the complexities involved in building a modern bike.

Once again, star mechanic Anthony Challinor of Velofix in Rozelle, provides the commentary from the workshop. Instead of posting one long video, however, I’ll be uploading a series of ‘chapters’ about the bike build.

In the opening sequence of part one, I explain how this bike is more than just a cookie-cutter off-the-shelf product that has all components selected before being delivered in a box to the local bike shop.

The #ProjectCaledonia offers a chance to experiment a little. And even the early stanza on this bike reminds me of how many questions emerge while riding on various terrain, in various circumstances, with various mindsets…

This review is a work in progress but the series of videos already includes showcasing some amendments to the stem (ie. a change of face plate, allowing dual fittings – one for my Wahoo Elemnt Bolt, one for my GoPro Hero9 camera) and you’ll soon seen a change of saddles… and other component swaps. 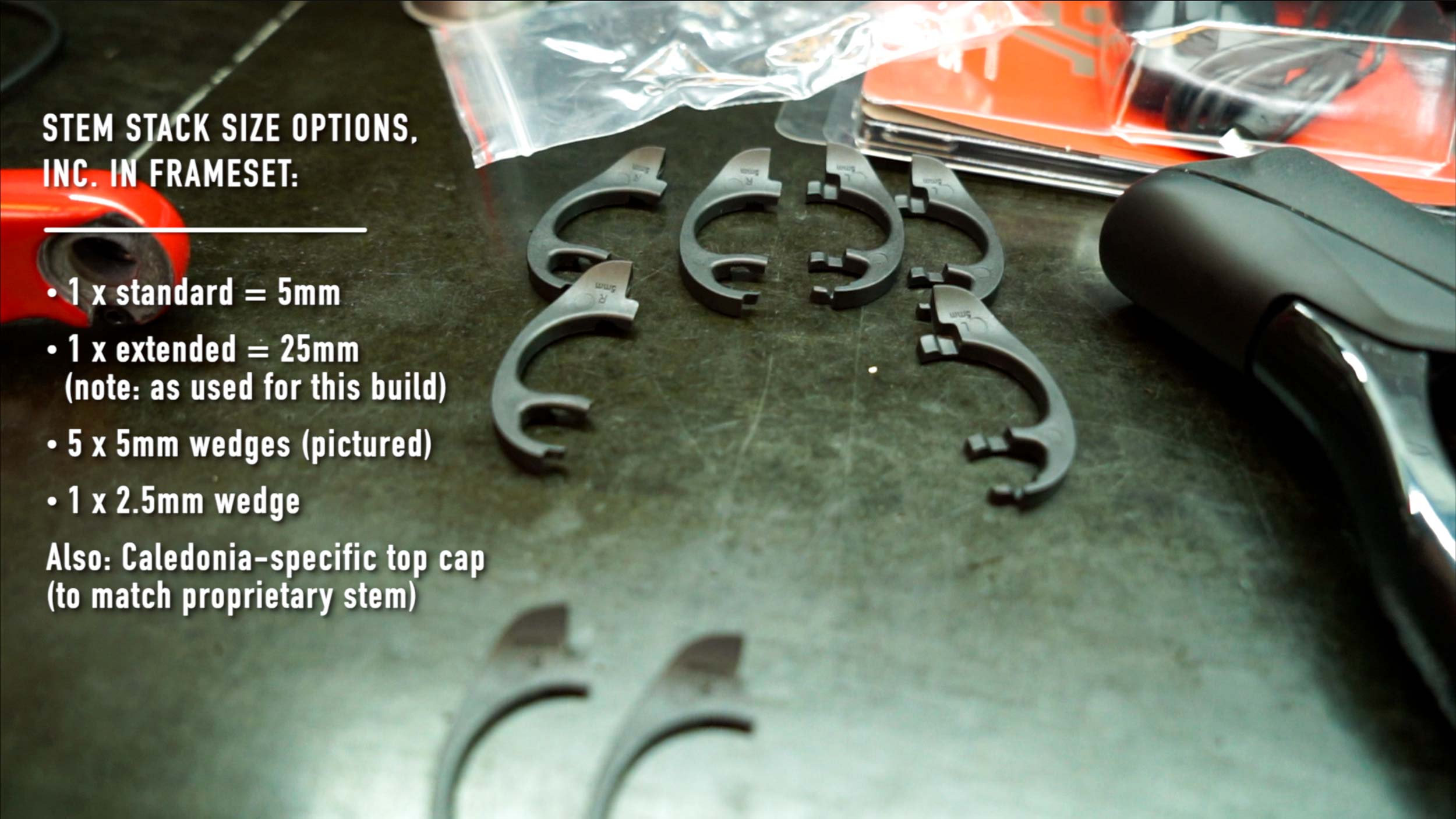 Watch the workshop video to see how the proprietary stem, fork and handlebars allow for a neat, hidden hydraulic hose arrangement.

Anthony Challinor knows his way around the Cervélo range. He has also built numerous bikes with SRAM groupsets and thus he knows plenty about the hydraulic hoses, disc brakes, and the wireless eTap shifting arrangement.

The sessions filmed at Velofix, however, provide interesting insights from Anthony who happily explains some tech details while he works on his maiden Caledonia build. It was also his first taste of SRAM’s ‘Wide’ groupset which was released earlier this year. 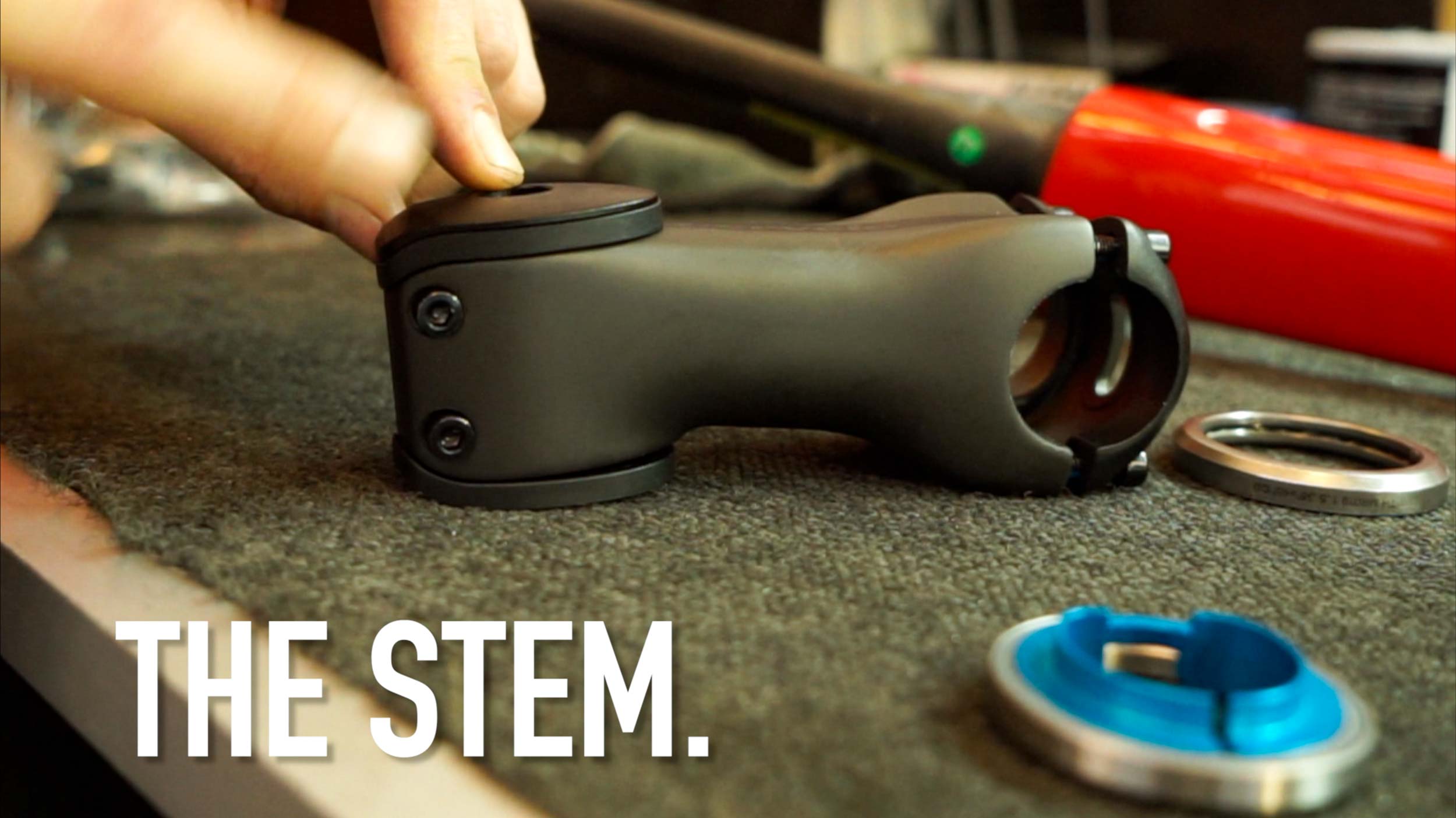 With consideration required for numerous aspects of the build – including a wide range of torque settings, the dot fluid for the hydraulics, complicated internal hose routing, epoxy glue for the fork, and the different bottom bracket required to match the ‘Wide’ groupset to the Caledonia frame – it’s best that an experienced mechanic does the work.

The workshop series of videos are not intended to be ‘How To’ clips, rather they highlight the level of detail that is so inherent with modern bikes.

When built well, a bike like the Caledonia is something that offers hours of quality ‘me time’… distraction-free cycling, on all kinds of terrain, going fast or slow, and creating adventures to sooth the soul and exercise the body (and mind).

If it is built by a mechanic who wants to save time or cut corners, it wouldn’t be so much fun to ride.

I’m happy to say that the only thing I needed to do to ensure the ongoing smooth function of the Cervélo Caledonia was to lube the chain, and wipe off the dust and mud after a couple of dirty off-road rides. Anthony did a great job on the build and I hope you enjoy the content that has been created with the help of an interesting, fun, fast, aero bike that’s as comfortable as it is versatile. 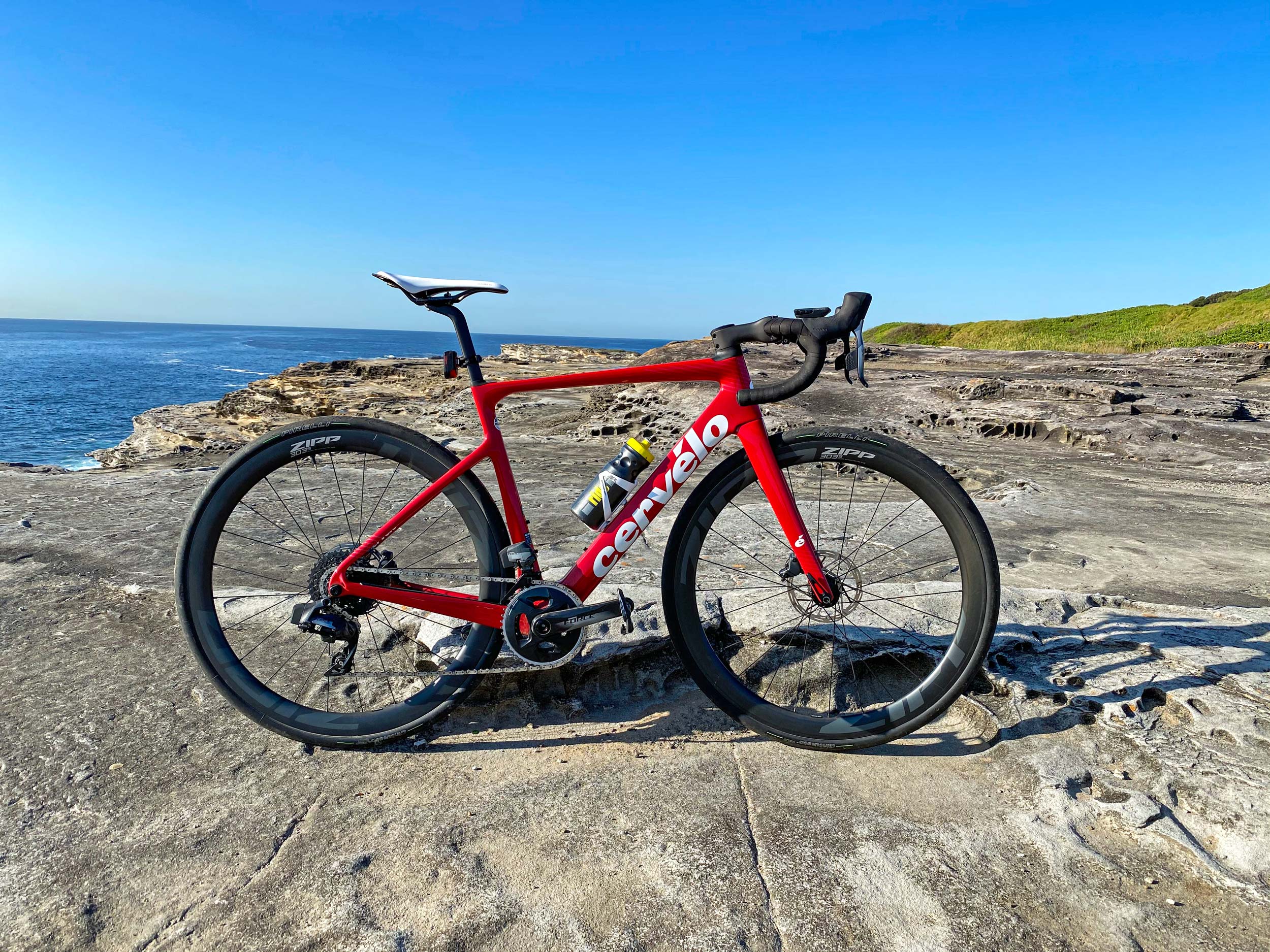 Gone are the days of getting a bike in a box, building it up, riding it for a month and trying to summarise all the thoughts that emerge in a 1,000 word article and a few supporting images. For years, RIDE Media has delved deep into what makes a good bike something that’s really quite special; the aim, of course, is to provide insights that potential customers really want to know.

You may opt to use the Cervélo Caledonia in a different way to me. On your first ride, for example, it’s highly likely that you’d be a little more conservative than what I was on the gravel, sand and rocky surface of the Oaks Trail. But it won’t take long for you to realise – and relish – what kinds of adventures are possible on a bike that has given me a lot to talk about and plenty of joy.

There’s more still to come from this bike. Beyond the rides and the rants and the workshop series, there is also the chance to change a few components and experiment with what’s possible for a bike that is built with the rider in mind.

There’s some outside-the-box thinking – some my ideas, others kind of forced on me by emerging trends in the cycling industry – and it’s been a treat to do a review with a bit of a fun, a high level of detail… and no end in sight.

It would not, for example, have been my choice to spec a road bike with a 43/30 chainring combo, but I was prompted by SRAM to try it and I’m glad I have. I’m not sure the front derailleur will stay as only around 1km of the 1,000+ done on the bike so far has been spent with the chain on the 30, but I’ve not yet fully exploited the range of riding opportunities that a bike like this offers.

It’s been an enjoyable month on the Cervélo Caledonia but there’s a lot of riding yet to come. 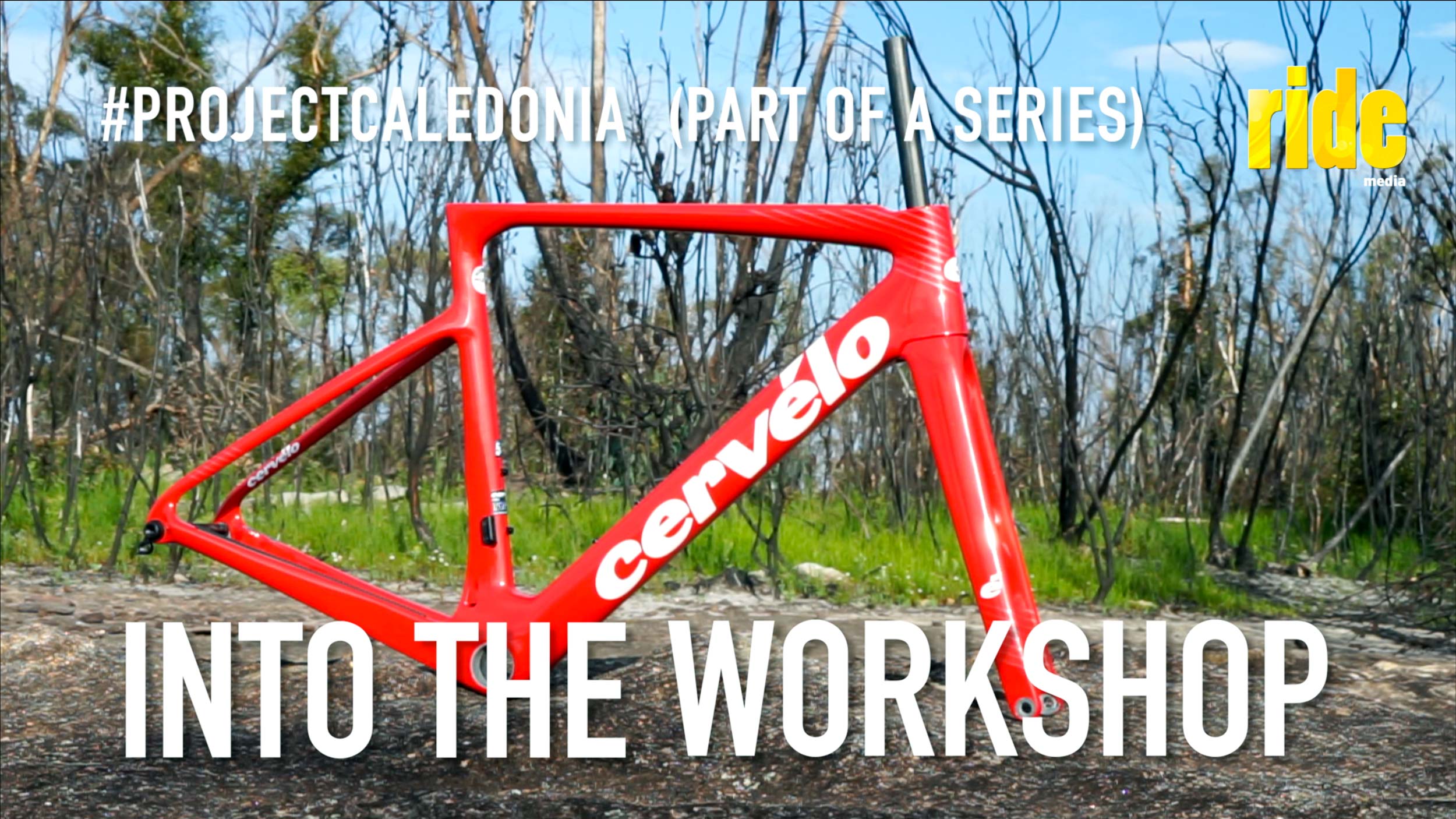