The POC cycling collection from Sweden screams out for attention. I recently got a chance to sample some of the products including a light, bright white Ventral Air MIPS helmet and matching AIM sunglasses…

The unboxing confirmed my suspicions: POC’s Ventral Air MIPS helmet is light! That’s one of the key selling points of this creative design from an innovative Swedish brand with a skiing heritage, but there’s more to it that the weight alone.

There’s plenty of things to like about the POC range of cycling products and when I was sent a box of products to review, it was a catalyst to switch helmets for the first time in a year.

– Click the YouTube links (above and below) to see my early reactions to the POC Ventral Air MIPS helmet. –

I’ve been riding with a Giro Helios Spherical (large) since it was released in Australia early in 2021 and it quickly became my favourite helmet. So, making a change was unnecessary, still it makes for an interesting product review because, in my appraisal, the Giro shape and style is one of the best helmets I’ve ever worn; it fits well, suits my head shape, matches the range of sunglasses I use while riding… and, thankfully, I never found out if it would do the job it’s designed to do, protect my head in the case of a crash.

I mention the Giro helmet in this POC review because it highlights some of the things I now look out for when considering what to put on my head before a ride.

This is part of what will become an ongoing review of POC products. Settle in because I have quite a lot to say about the Ventral Air MIPS, and I’m trying to relay some of the things that come to mind in the early stanza of wearing a new helmet after a long period of using something that I’ve come to know and love. 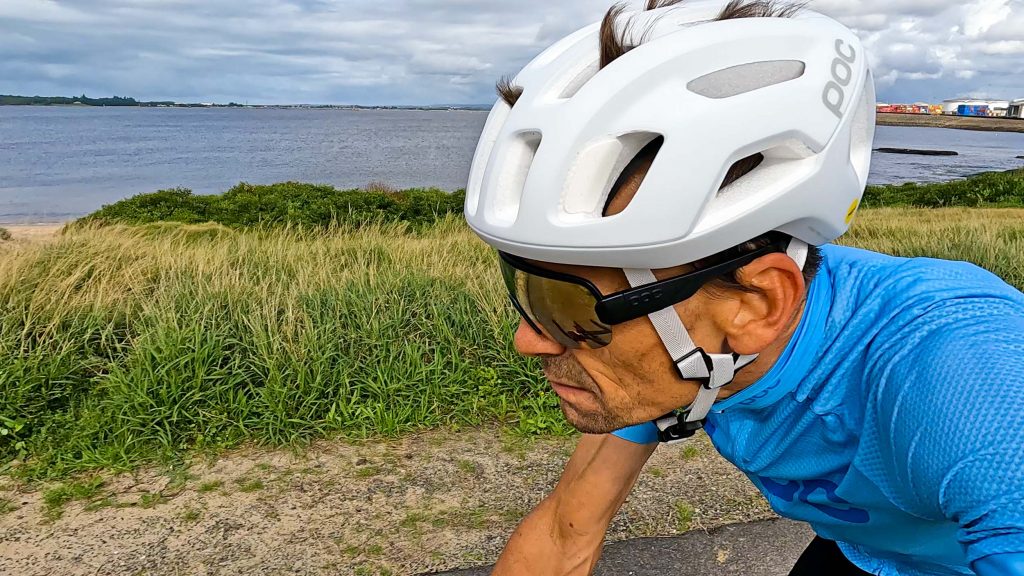 I write this next bit cautiously, not wanting to jinx things, but I’ve not crashed once while wearing the Helios Spherical (with MIPS). Phew! But I certainly did get to know the helmet over the past year. At under 300g, it’s one of the lighter options on the market and the sizing suits me. That said, with the Giro range I could, if I wanted to, opt for either the large or medium.

Most contemporary cycling helmets offer one-the-hop sizing adjustments via a rear tensioning system, allow you to easily fine-tune for a more precise fit. With the large Giro, I could wind the dial quite tight at the start of a ride. I have found,however, that after some time on the bike, it’s also good to be able to loosen this off a little as my head heats up.

Do our heads actually get bigger while we ride? (If you know the answer, please let me know. But it does feel that way at times… and I’m guessing it has something to do with blood flow.)

I have also tried on a medium Giro helmet and, again, it seems to suit my head, albeit with the rear ratcheting system set a little looser. And, with this sizing anomaly in mind, I was curious about what other brands’ helmet sizing is like.

– Click the photos below for more: left to right, the KASK Wasabi, KASK Mojito 3 and Giro Helios Spherical –

I’ve got a collection of helmets to choose from and I know that sizing varies considerably from one brand to another.

With the KASK family of helmets that I’ve tried – including the Mojito 3, Valegro, Protone, and Wasabi – I wear medium. Straight from the box, onto my head, and rarely even any adjustment to the strapping required, the medium suits me (while the large tends to seem… well, a little too large).

To cite another example, of the Oakley helmets I’ve used the medium seems an obvious choice (based on the sizing chart) but I know from experience that an Oakley medium is too small and simply doesn’t fit on my head properly… so, for the ARO3 and ARO5 that I’ve tried, large is the best size options for me. Still, the Oakley ARO5 – which is a great shape offering aero benefits while also providing ample ventilation – sits quite high on my head and can look a little cumbersome. 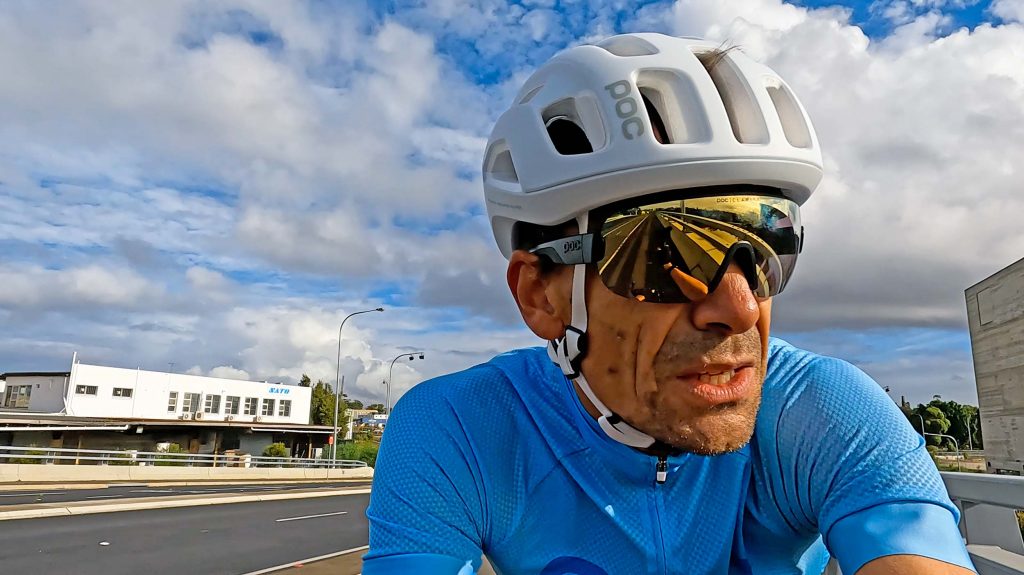 With these discrepancies in sizing in mind, when POC asked if I’d like to try one of their helmets, I answered, “Yes please, but is it possible to try both the medium and large to ensure I’ve got the sizing right?”

“Indeed,” was the answer. And so I waited for the delivery and, when the box arrived, opened it with enthusiasm.

With the camera recording, I grabbed both boxes and started filming my reaction to my first viewing of the Ventral Air MIPS. As you can see in the unboxing video, the obvious highlights of the POC offering include the light weight (292g, versus the 297g of the large Giro Helios Spherical), the bright white hard-shell – which is so stylishly matched to white foam, and white strapping – and the obvious ventilation.

What I didn’t realise at the time is that, instead of sending a medium and large, POC actually issued a small and medium. So, please excuse the error in my commentary in the unboxing / fitting video. I got the details wrong, but one of the points I wanted to make remains: don’t compromise in the hope that a smaller helmet doesn’t appear too large on your head.

Be sure to get the correct size, not just for how it looks but to ensure it does what it’s meant to do: protect you in the case of a fall.

It seems obvious enough but many conversations I’ve had with cyclists over the years highlight the reality that some riders think that a smaller sized helmet is going to look better on the head, because it’s not as bulbous. And so the wrong sizing decision is often made… and sometimes later regretted.

As you can see in the video when I put the small next to the medium, there’s very little difference in the overall sizing. In fact, I made a mistake during the filming suggesting that the small was the medium (and vice-versa). 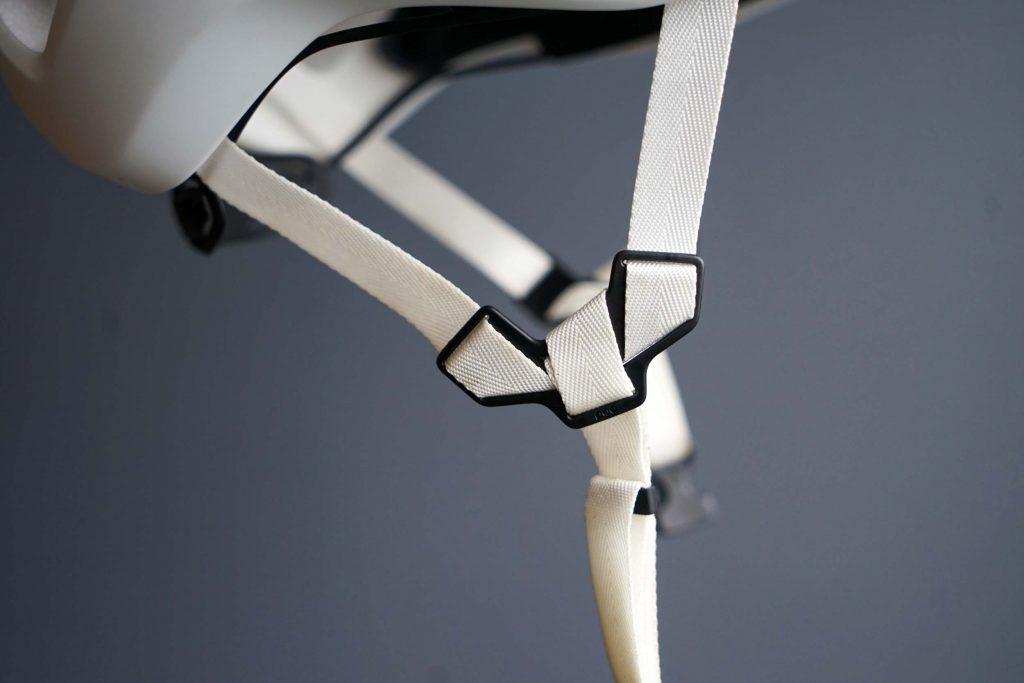 What I’ve also learned after a fortnight of riding with the POC helmet is that the strapping deserves some extra attention.

Some brands have a fixed loop that goes under your ears, with the chin strap attached in a way that allows for adjustments in sizing. Some brands opt for oodles of adjustment with strapping that you can fine-tune before (or during) every ride. This is great, if you head swells as you ride, or if you choose to wear a cap underneath to ward off the cold (or block out the sun or rain).

I’ve often done a helmet fitting and established the ideal strap length and then taken to the excess that hangs under my chin with a pair of scissors. In other words, once I understand how much strap I need, I cut off the excess (and then burn the ends so that it seals and doesn’t later fray).

I should have done that with the Giro straps, but I just never got around to it and I found that I could tuck in the excess into the little rubber fitting without much fuss. Still, there were plenty of times when that arrangement would come loose while I was riding and I’d need to stop to tidy things up underneath my jaw.

All this leads me to another benefit of the POC arrangement. The strap is long, providing ample adjustment options but it also presents in a way that makes on-the-bike fine-tuning oh-so easy. Furthermore, there’s no need to bring out the scissors after the initially fitting. 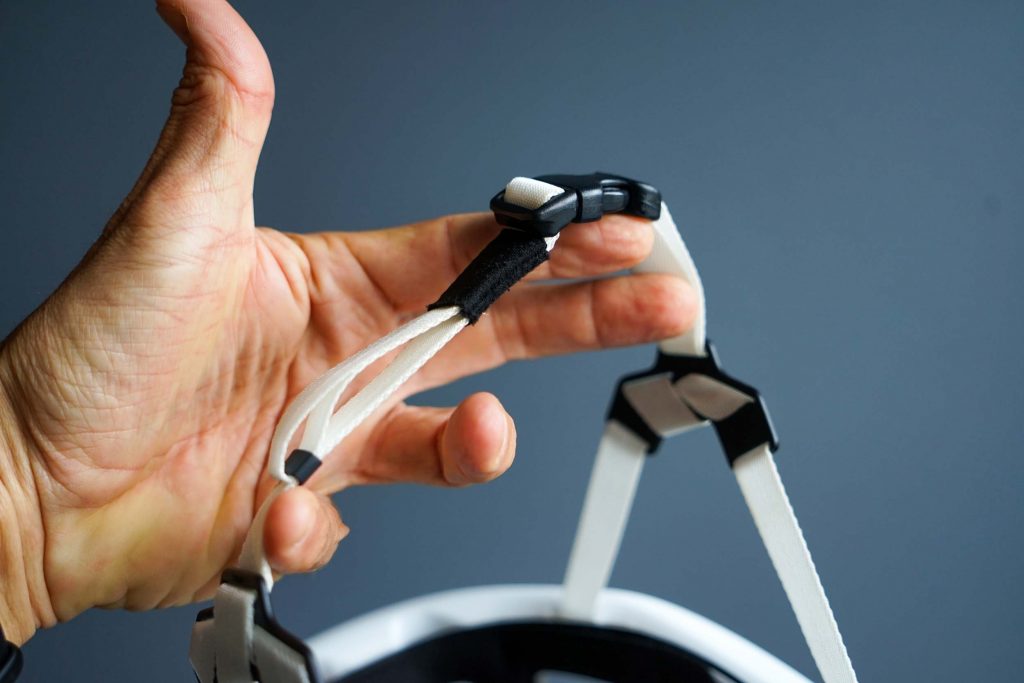 The Ventral Air MIPS offers under-the-ear adjustments, and although it might take a bit of fiddling to get it so that it suits your head neatly, the option is there to get the strap length exactly right.

It took a few rides, and a bit of trial and error, but before long I had the strap in a position that was nice and tight after exiting the helmet and looping under my ears… and it even allowed me to arrange it so that the front of the helmet was pulled down a little (to neatly match the sunglasses I was using) and not have any ‘flapping’ while I rode.

Initially I had it so the under-ear arrangement was a little tight, too close to my earlobe to be precise. But I found that, with the helmet fitted, I could give a little tug on the plastic that the strap loops through and it nestled into the right position with relative ease.

If you watch some of the riding videos since I’ve started using the POC helmet, you’ll see that the strapping arrangement under my chin does, at times, move around a little and there’s a loop that forms near my jawline.

For me, it was really quite apparent while I was editing my videos, but it takes no effort at all to fix that up while riding: just slide the rubber grommet up towards the ear and POC’s excess strap neatly slips into a tidy arrangement.

The photos illustrate the clever strapping configuration of the Ventral Air MIPS. In my appraisal, there’s no need to cut any off any excess strapping because the design is practical and very tidy. It is all neatly housed under the chin. What makes this part of the helmet even better in my opinion is the little slip of black material that wraps around the folds of strap and provides a bit of extra comfort if you opt for a tight fit around the jawline. 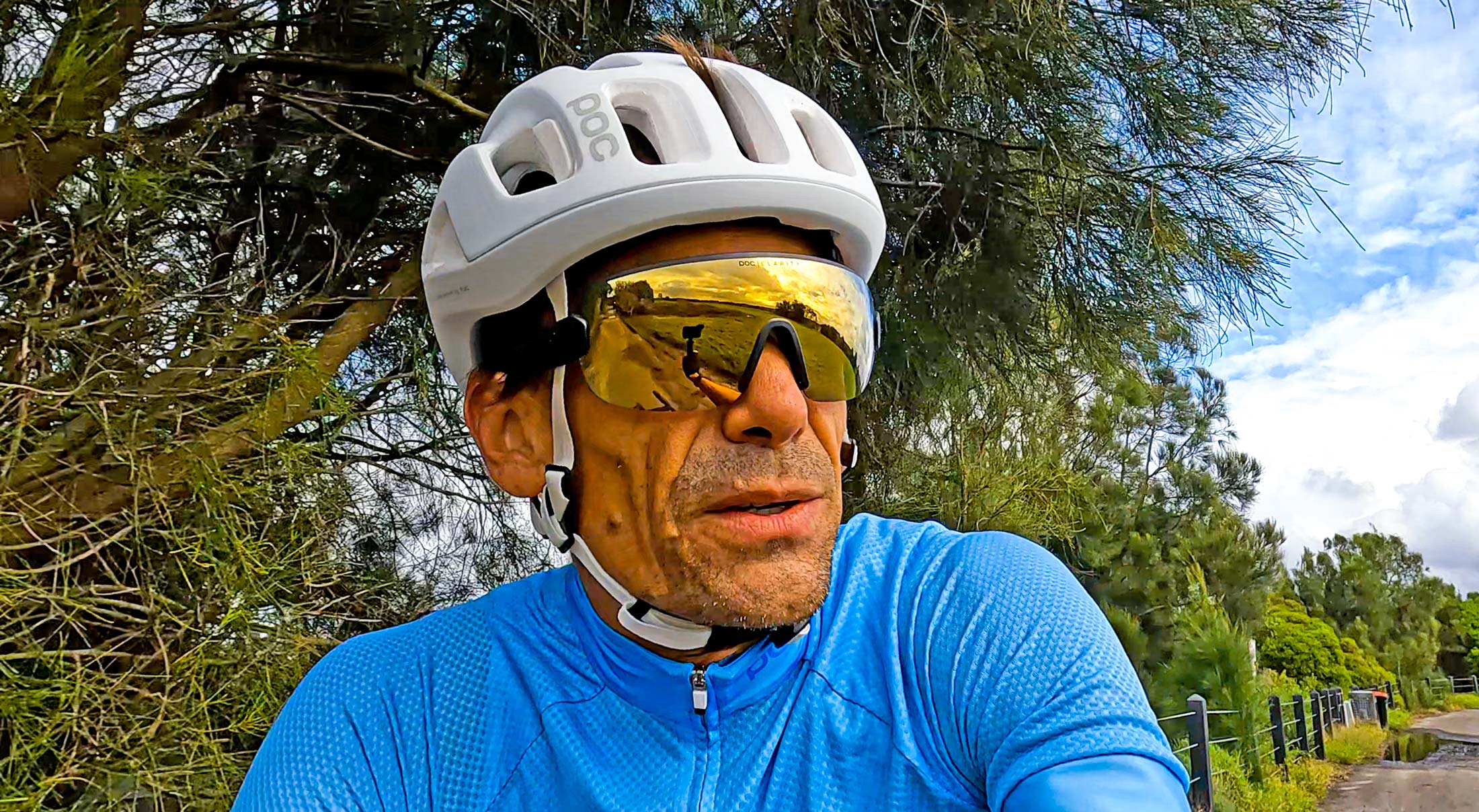 A slight settling in period

In the ‘first ride’ POC video, you’ll hear my concerns about how the Ventral Air MIPS sits at the front of my head. I found that the two pronounced front parts of the helmet squeezed in on my forehead quite a bit, leaving an obvious mark and causing a degree of discomfort.

There are a couple of things to consider if this happens to you. First of all, I suggest you fit the helmet by positioning the front on your forehead first and then lower the rear of the helmet onto your head. Voilà, this gets the matched-to-sunglasses position correct and also reduced the pressure of the hard foam on your forehead.

Finally, as with other helmets I’ve tried over the years, I also found that there was settling in period. After only a few rides, the newness of the foam casing quells – ie. the slightly ‘sharp’ edges of the foam round out – and the helmet nestles neatly into position.

It took a couple of rides before I found the POC’s sweet spot but once I did, it was a case of set and forget. Helmet on. Strap fastened. Dial twisted. Clip into the pedals. Ride!

The ventilation is fantastic. You can see my reaction in the first ride video. “It’s like a party on my head.” And, later, “It’s like turning on the air-conditioning.”

Do I like the new helmet? Yep. Will it be my go-to for the next year? Probably. Do I still like the Helios Spherical? Absolutely. Do the two helmets – one from Giro, one from POC – have an entirely different aesthetic? Definitely. Will my selection be based on mood or conditions…? I’ll let you know in a year. Right now, I’ve shelved the Giro and am enjoying a light, bright, white change on the top of my head.