Months before the #TDFF began, Marianne Vos talked about the prospect of wearing the yellow jersey. “It has an iconic dimension that transcends the sporting context.” After two days of racing, the Dutch superstar has won a stage and the right to wear the maillot jaune.

This is the #ZacWilliamsGalleries of stage 2  of the Tour de France Femmes avec Zwift. 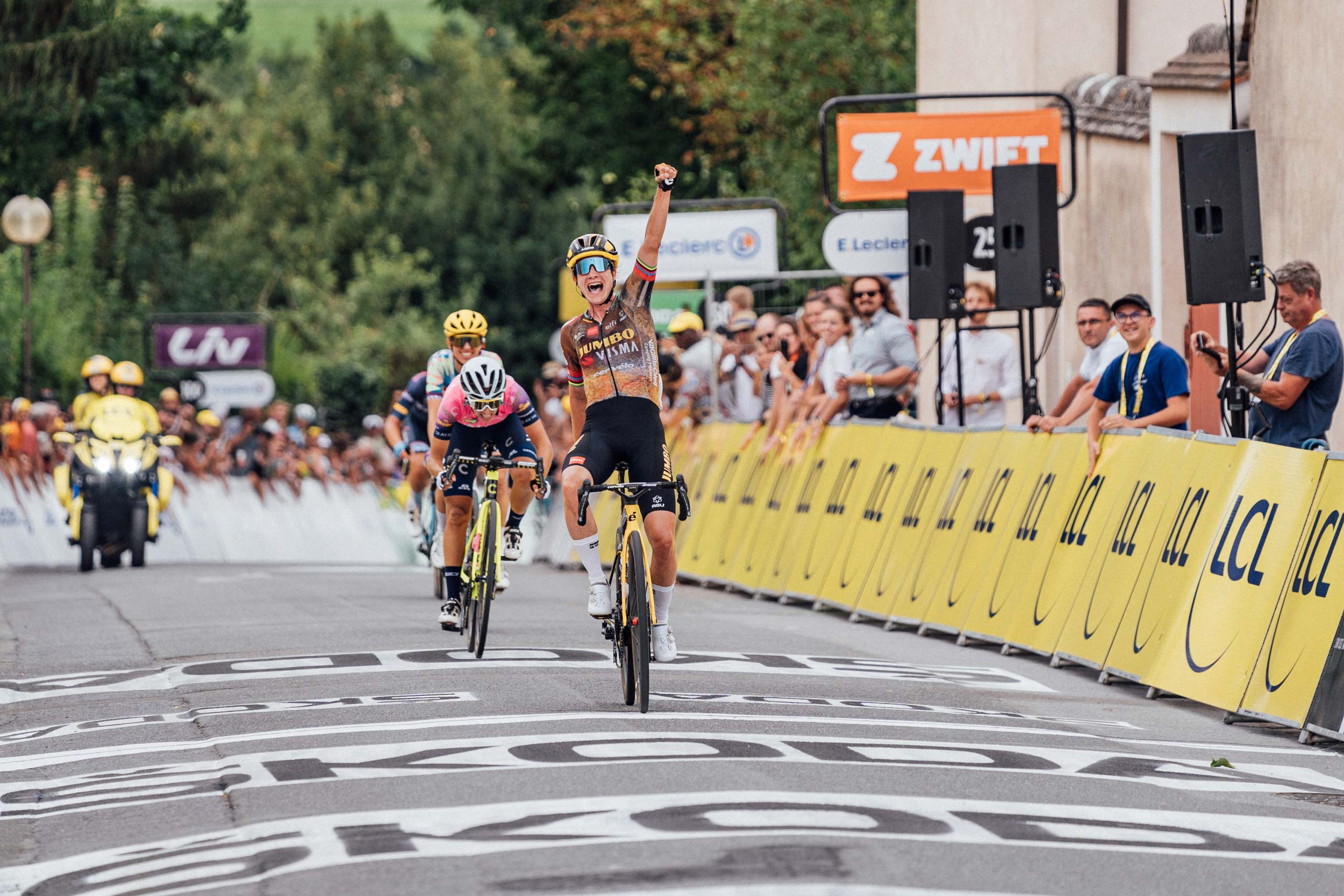 Marianne Vos won a stage of the inaugural Tour de France Femmes avec Zwift. Of course she did. Her humility when talking about the race months in advance was typical of the Dutch veteran’s subdued off-bike ways. She said that winning a stage would be the aim of the week but that the title was out of reach… but, judging by the way she has raced the first two stages, the 35-year-old also has a chance of a good GC result.

“No, the general classification won’t be a personal goal,” she said in an interview published in the Official Tour de France Guide (Australian edition). “The team’s priority will be to win a stage and if that happens one one of the opening days, there could be a nice bonus in the form of the yellow jersey.”

Lo, that is exactly what has transpired.

She outclassed her rivals in the sprint but also rode a savvy race, avoiding crashes that marred the 136km flat stage that included crosswinds and accidents, one which forced pre-race title favourite Marta Cavalli out of the race.

Vos now leads the GC with a 10-second advantage over the runner-up in Provins, Silvia Persico of the Valcar Travel and Service team, with Katarzyna Niewiadoma in third place 12 seconds behind the Dutch rider from Jumbo-Visma.

Lorena Wiebes, the winner of stage one, finished sixth in the second stage and dropped to sixth place on GC, 35 seconds behind Vos, who was the runner-up in Sunday’s stage in Paris. 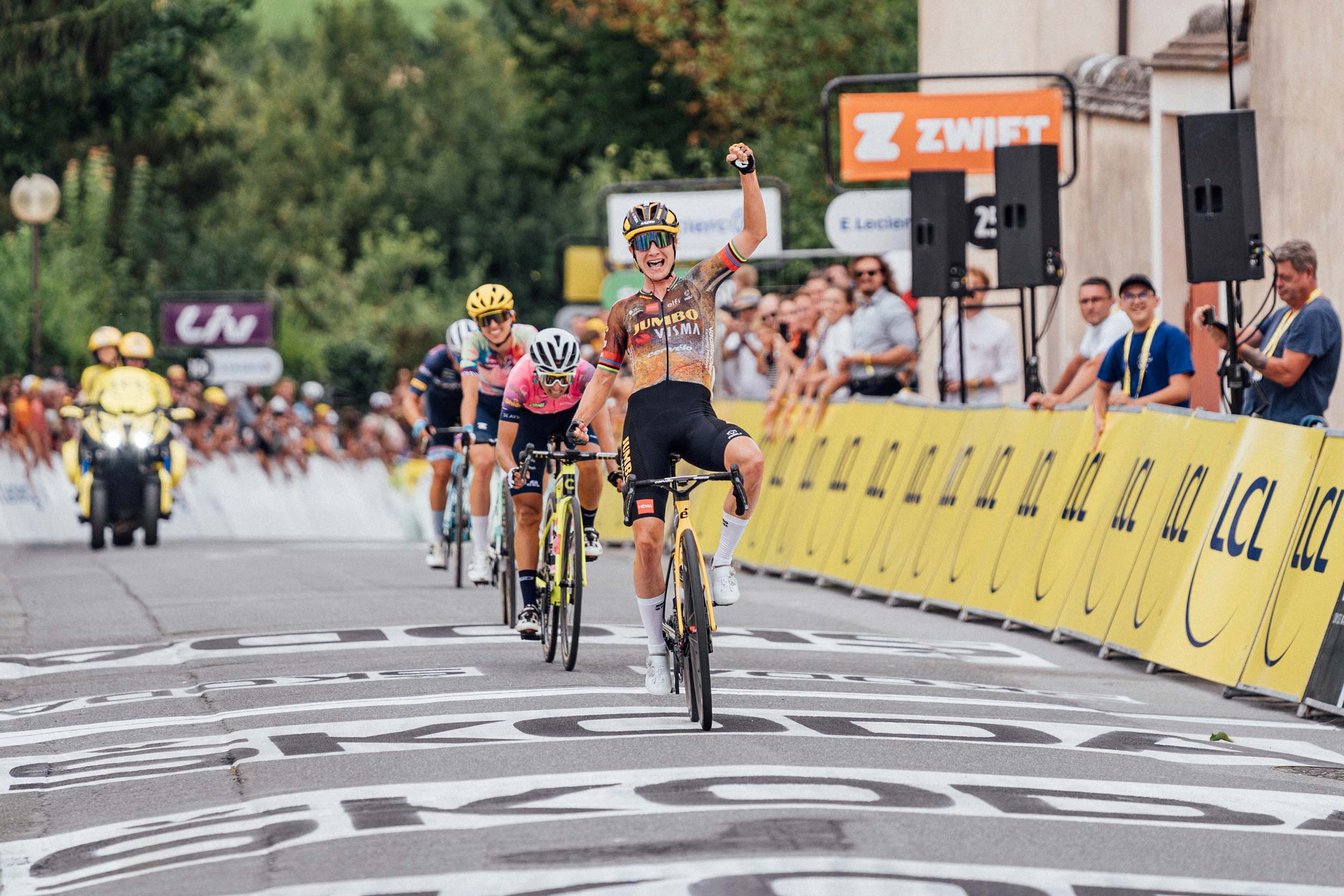 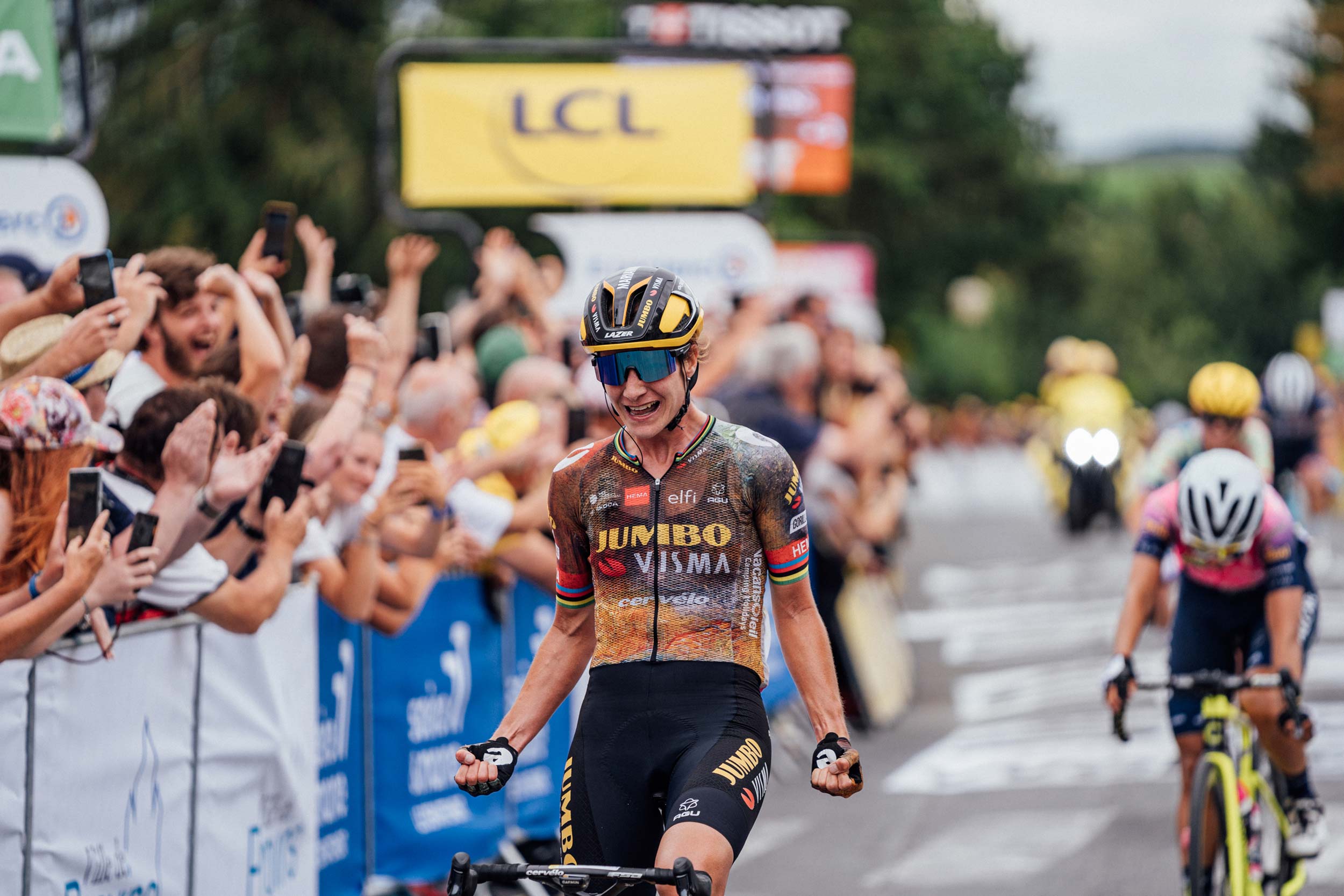 “I knew there were several fast girls in the group and we had already wasted a lot of energy trying to stay ahead of the peloton,” Vos said in the post-stage team release. “My legs felt okay and all I had to do was stay calm and sprint as well as I could. And luckily, I did.”

In her years as a professional cyclist, Vos has claimed 28 stage race titles and although she believes there are others who are destined for the GC victory of the TDFF, the new race leader holds the aces after only two days of racing.

For the second day in a row a rider has finished outside the time limit (with Slovenia’s Ursa Pinta of UAE Team ADQ finishing over seven minutes after the time cut of 23:17). And some of the obvious GC favourites have lost time because of crashes.

Marta Cavalli is out of the race, withdrawn by her FDJ-Suez-Futuroscope team after a nasty incident involving the Australian national champion Nicole Frain.

Meanwhile, Amanda Spratt was also caught up in the same crash that claimed Cavalli and the former national champion from Team BikeExchange-Jayco is already out of contention in GC, losing 9:52 to Vos in stage two. 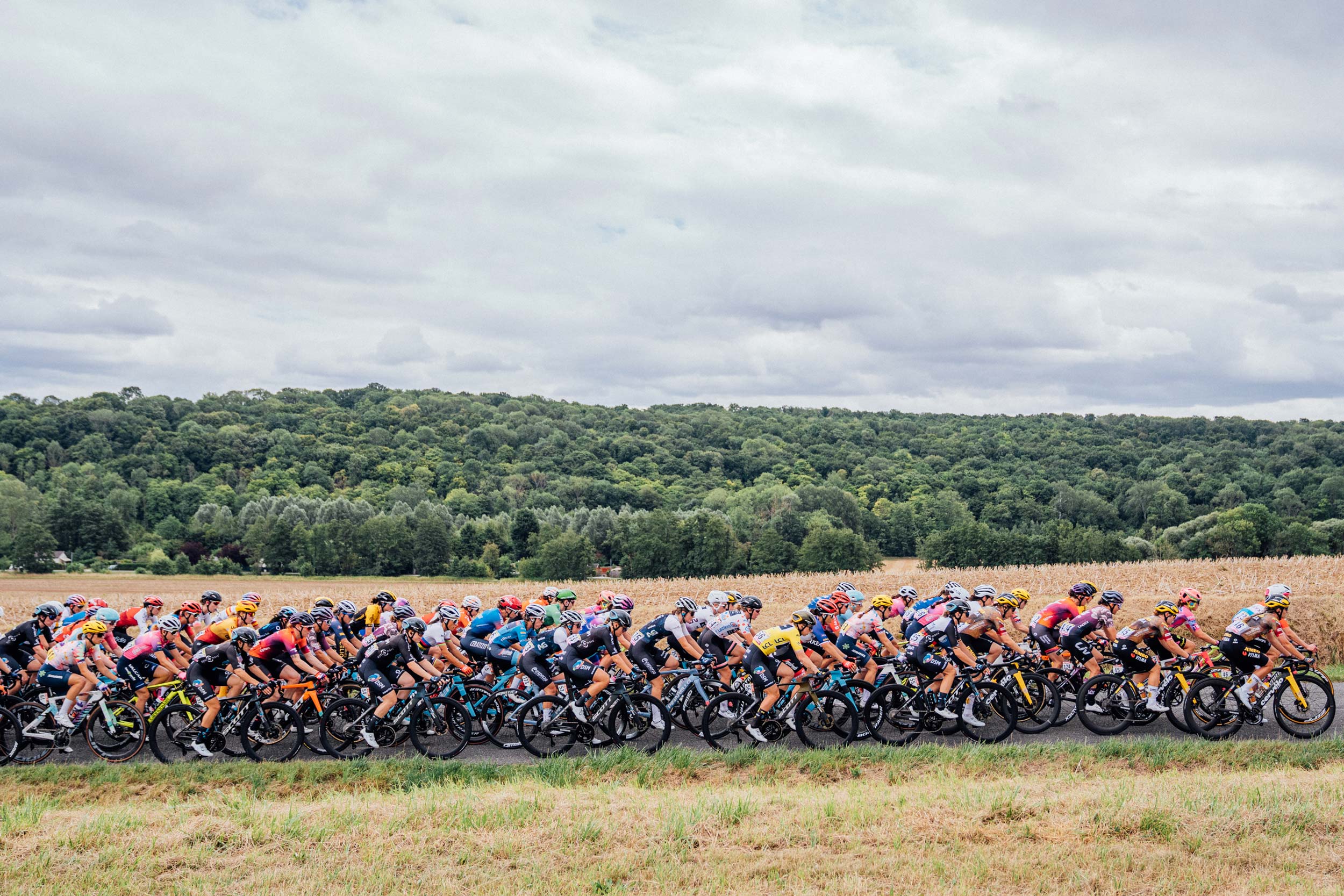 Zac Williams is following the TDFF and we are proud to present this collection of his photos from the second stage. (Be sure to follow Zac on Instagram, and see more of the fine work he has done.) 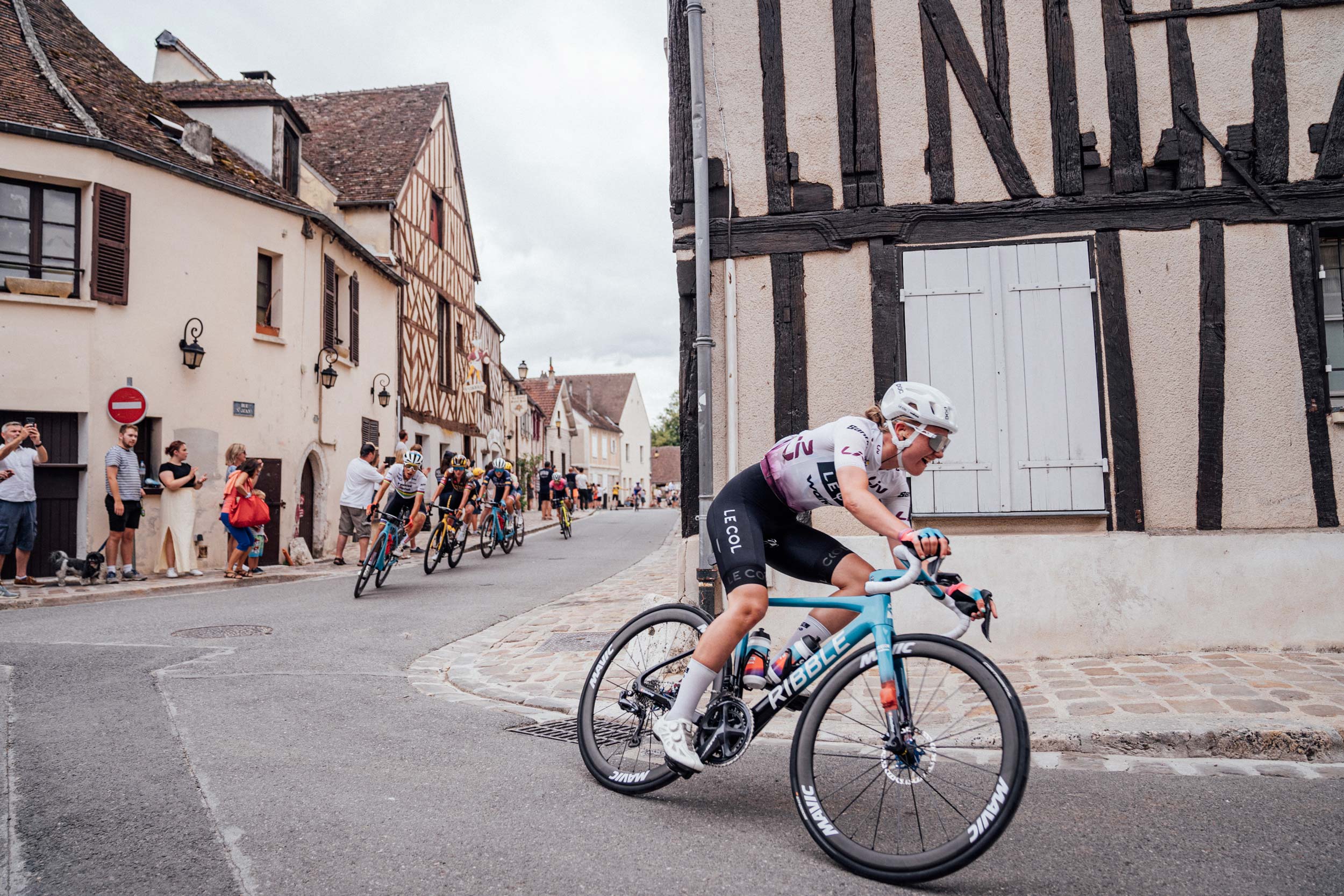 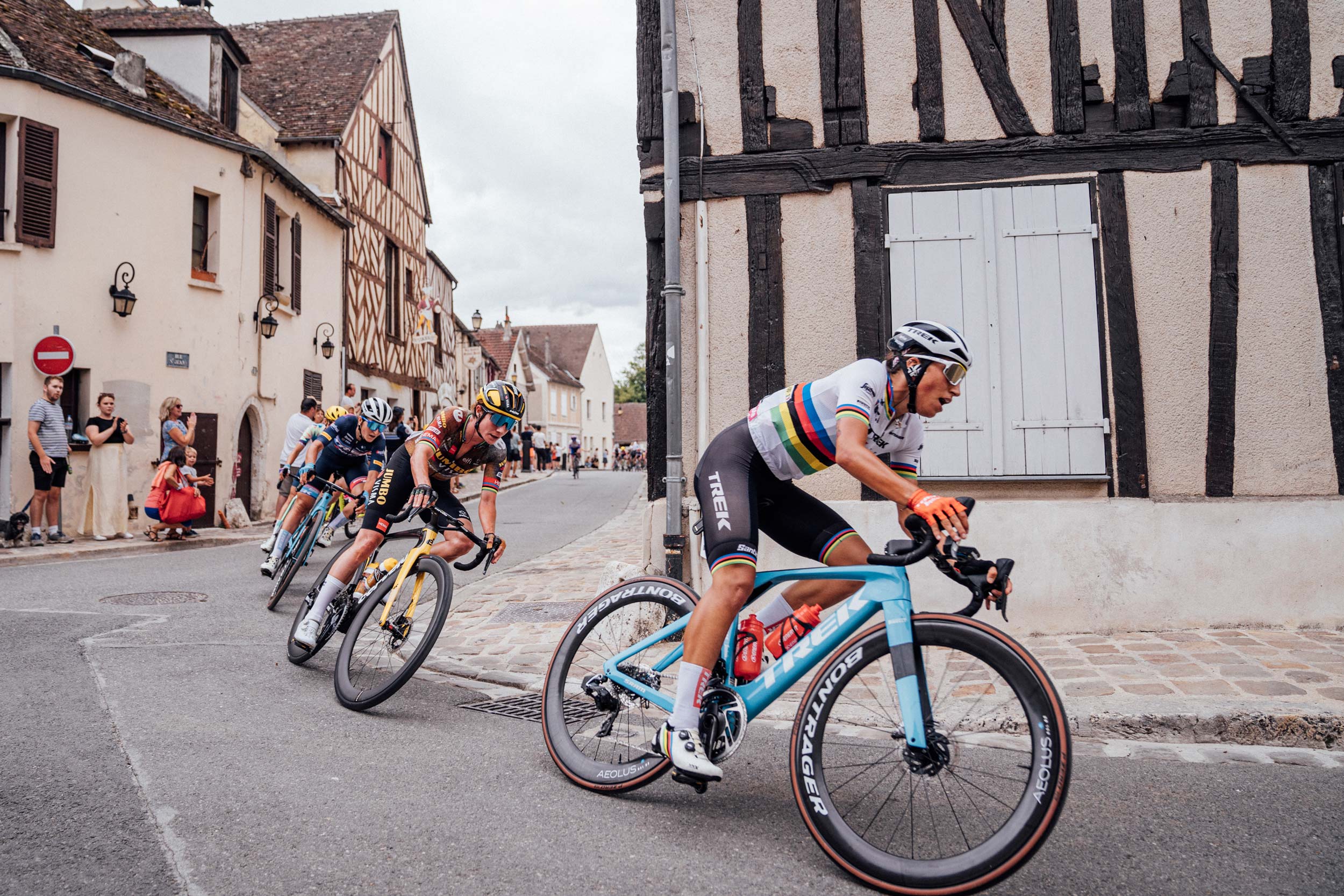 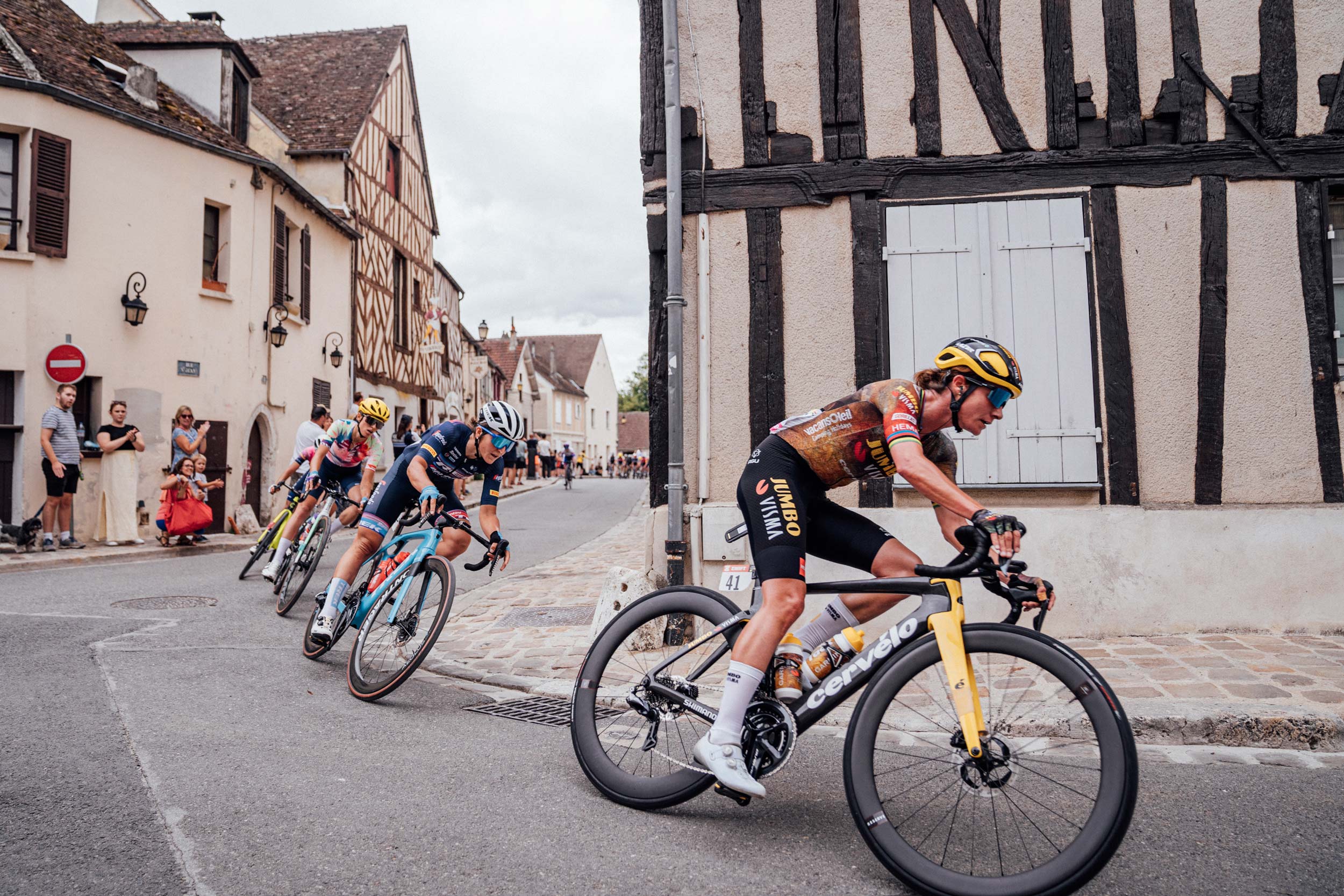 Marianne Vos, on her way to the stage victory and some time in the yellow jersey. 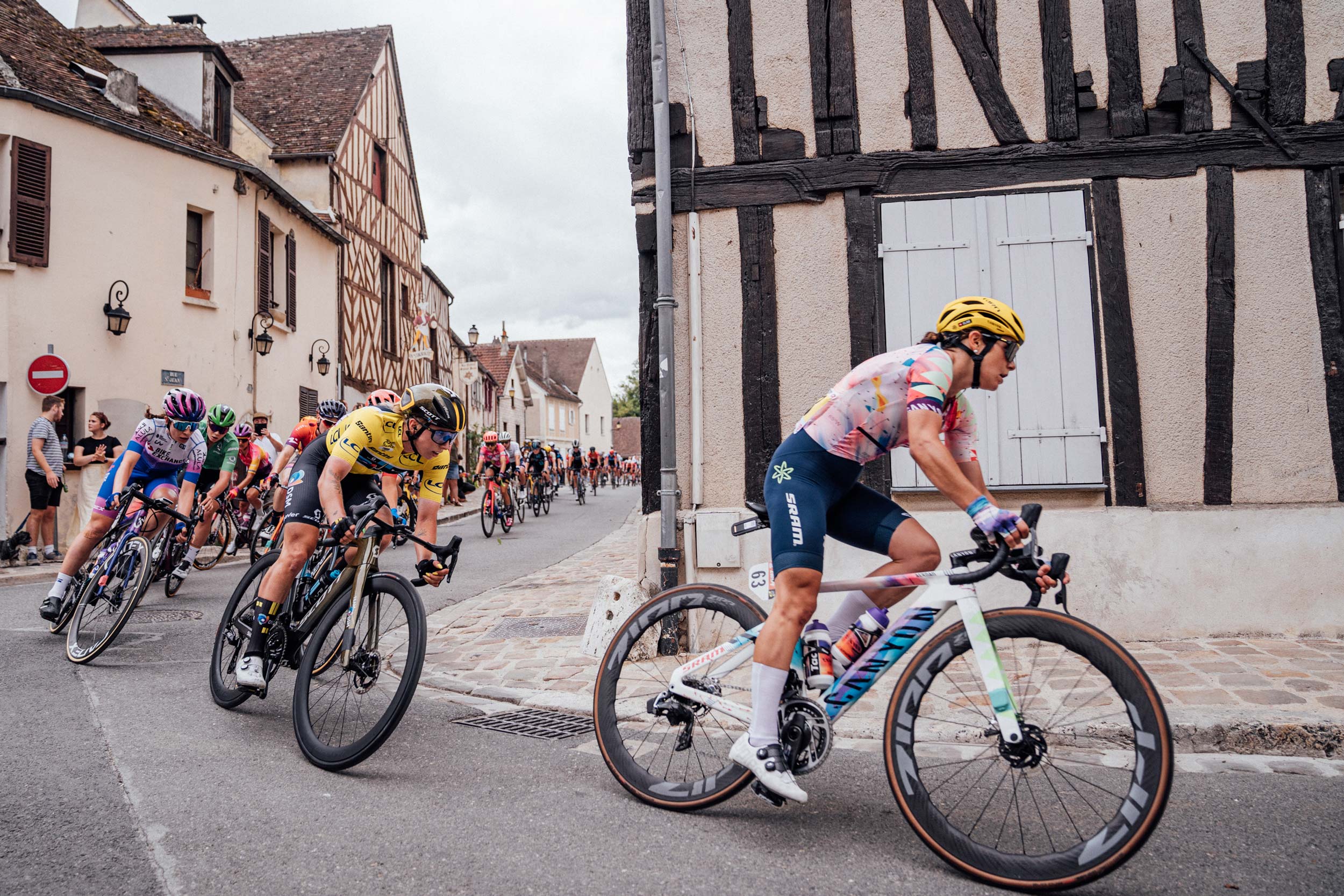 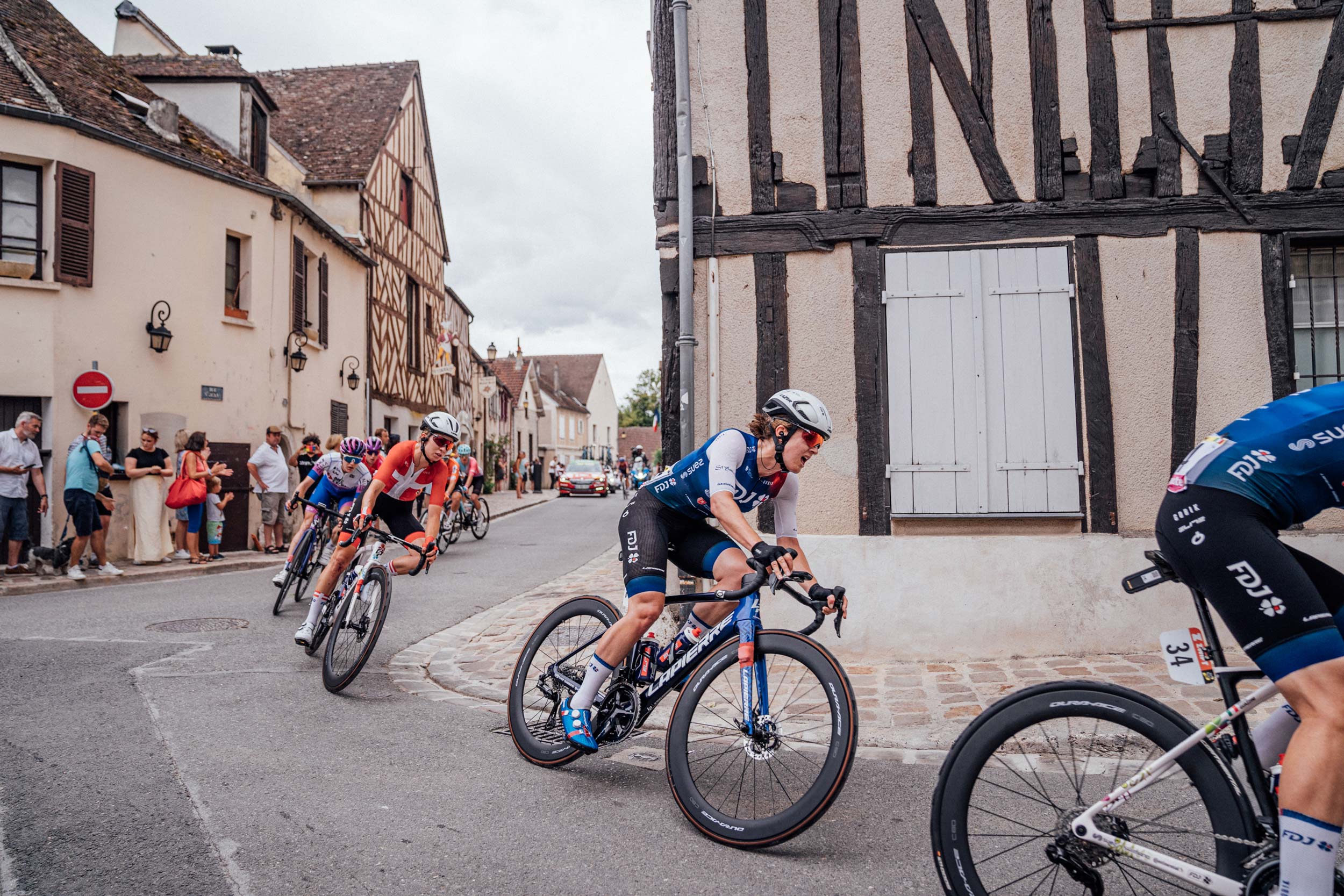 Grace Brown ahead of her team-mate, the Danish champion Cecilie Uttrup Ludwig. 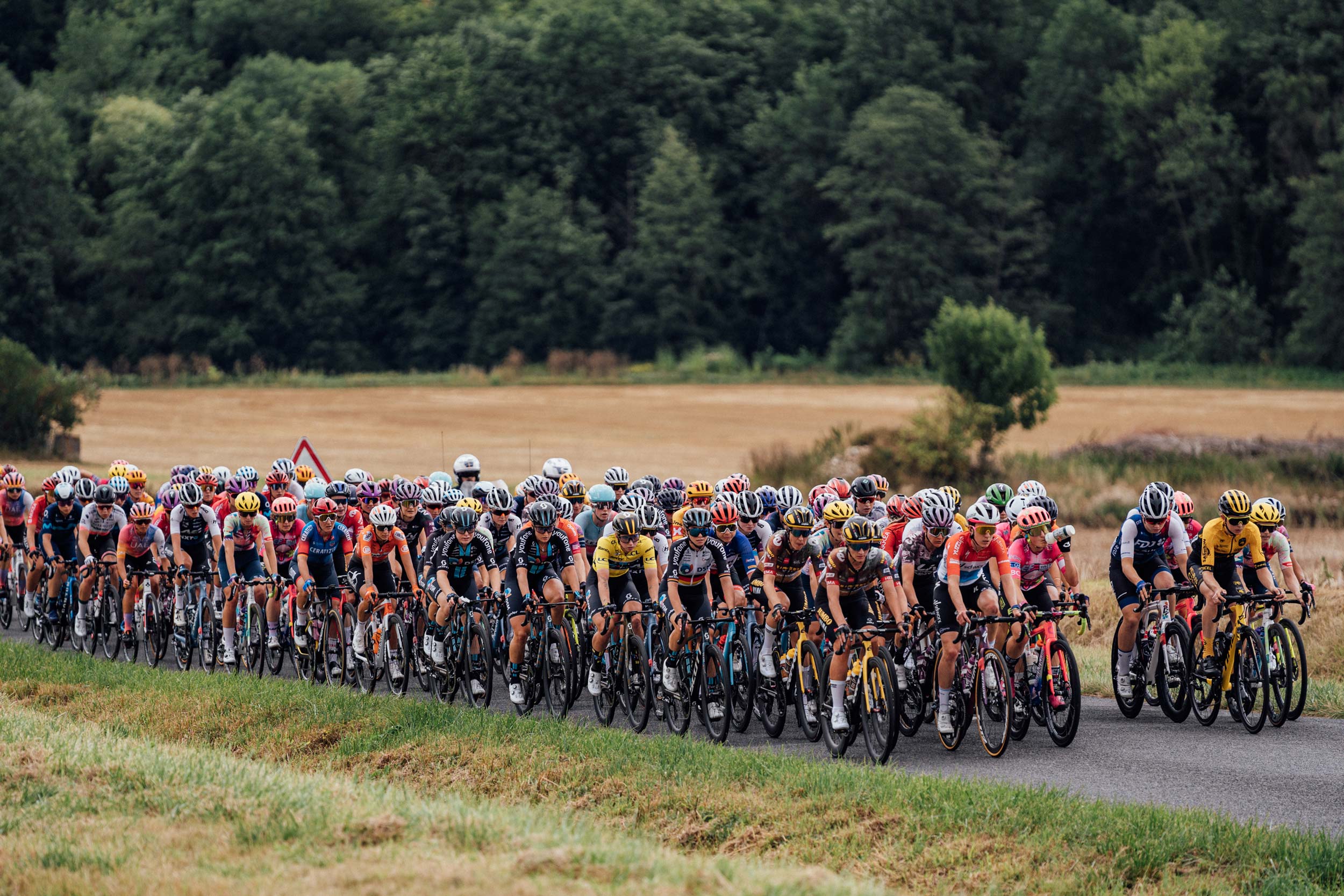 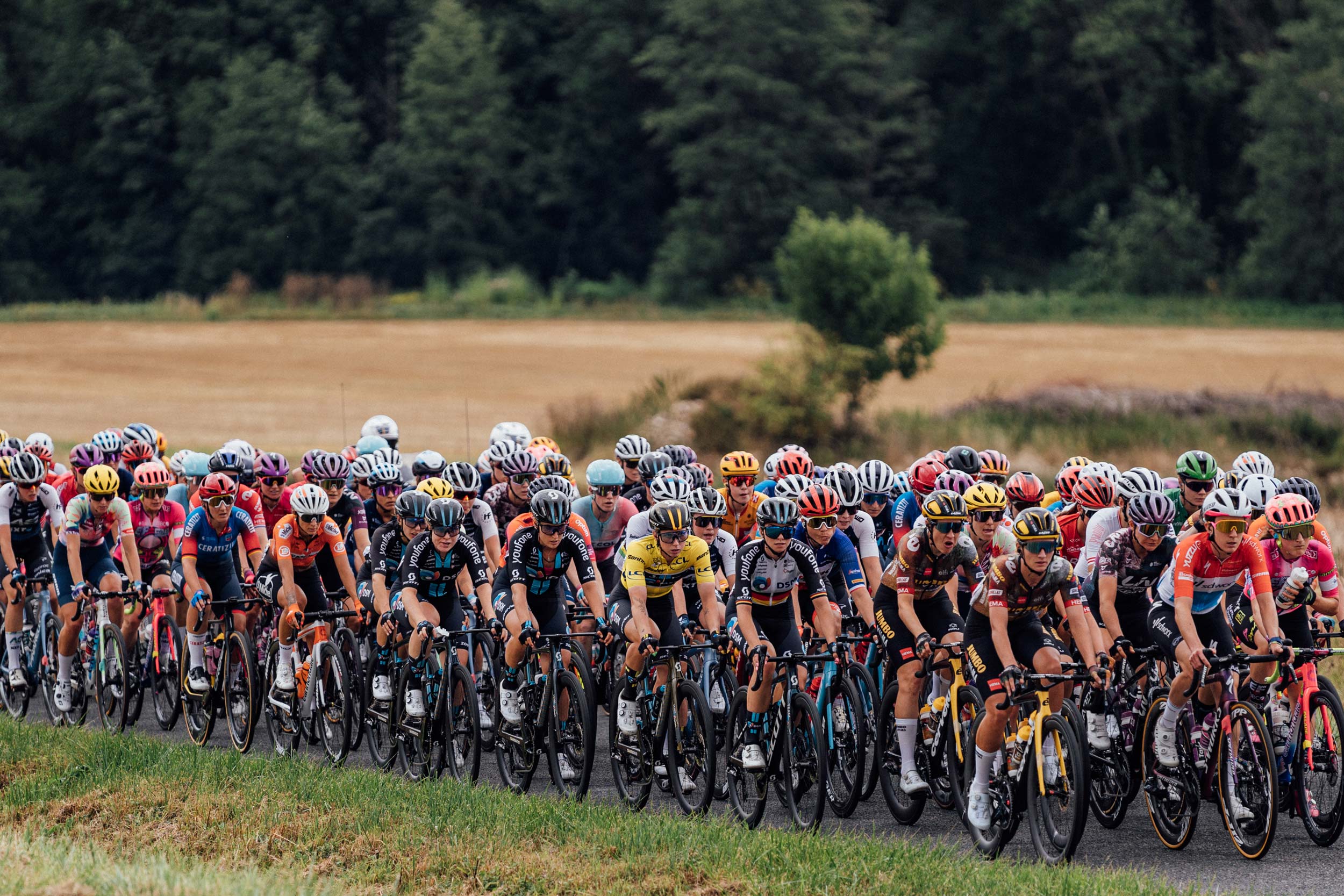 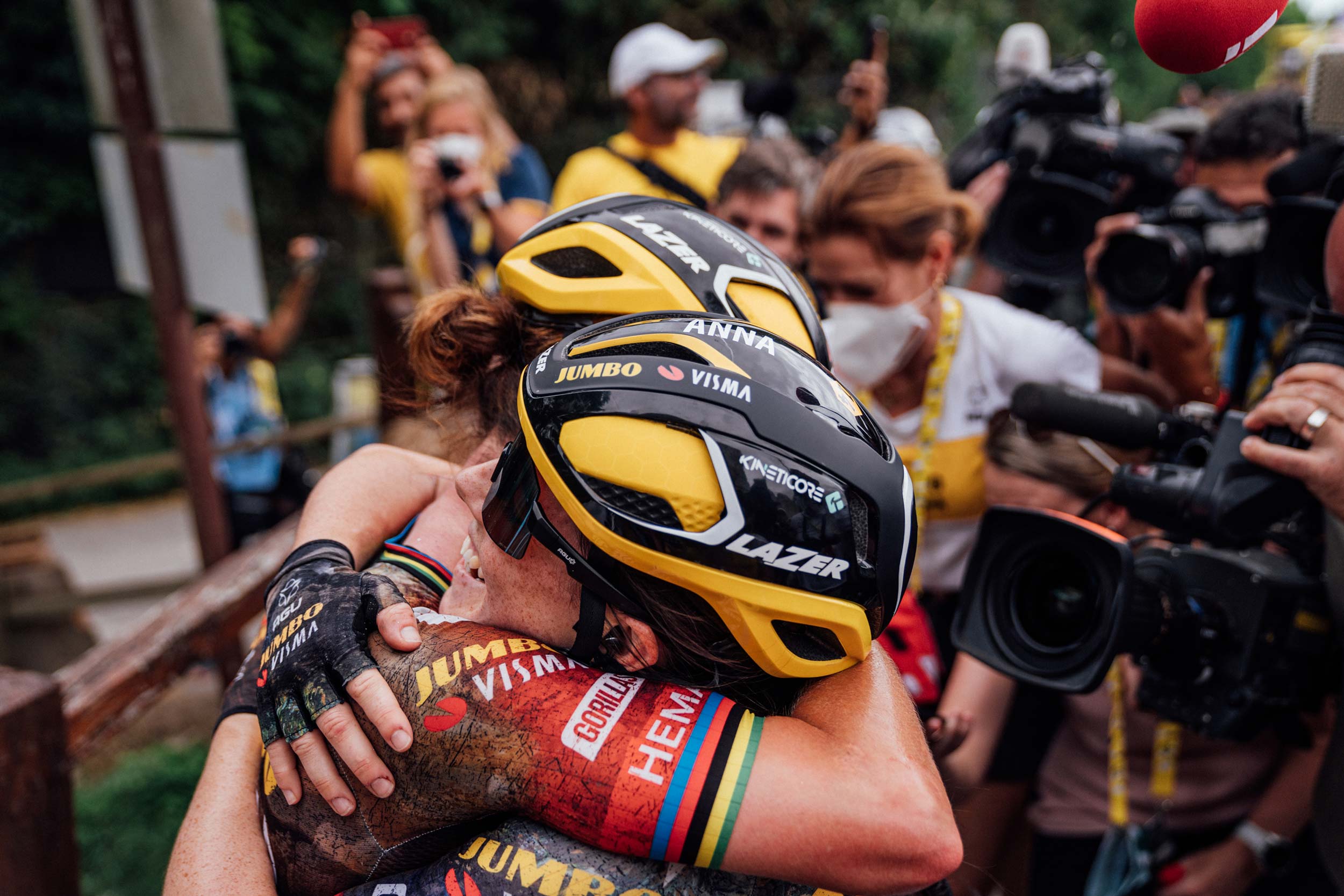 Marianne Vos is the race leader, and a stage winner, but she is also one of the riders who was pivotal in making the TDFF a reality. Back in 2013, she was part of a press conference that included the UCI president at the time, Brian Cookson and TDF race director Christian Prudhomme. The talked about the intentions of establishing a greater presence for women’s cycling on one of the rest days of the 100th edition of the Tour de France.

In 2014, La Course by Le Tour de France was contested for the first time, a one-day race on the streets of Paris in advance of the arrival of the men’s peloton for the final stage of the TDF. The winner was none other than Marianne Vos.

Eight years later, the rider many refer to as the “greatest of all time” continues to prove that she’s not only a formidable competitor, but that she is also able rise to the challenge of performing under pressure… and on special occasions. 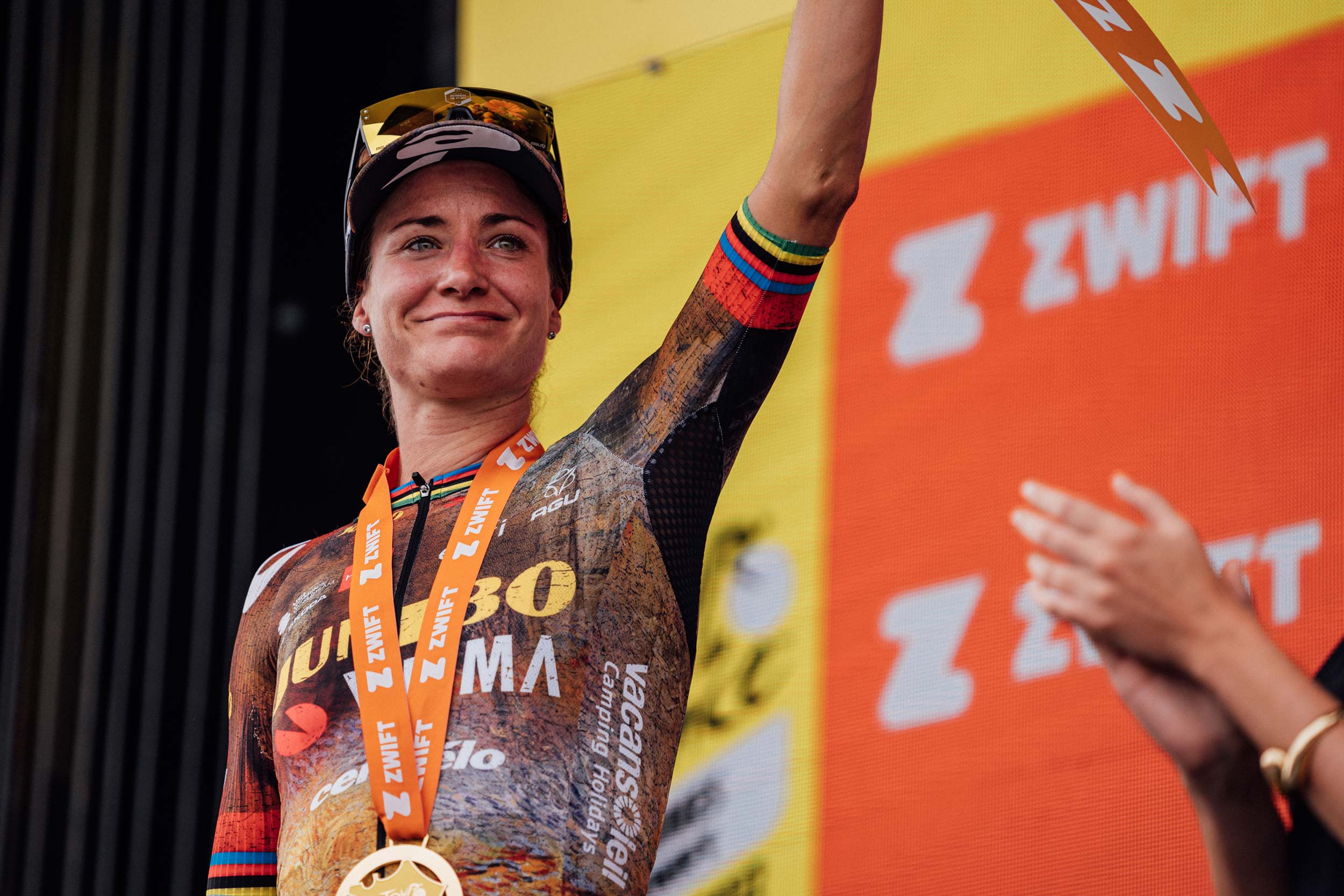 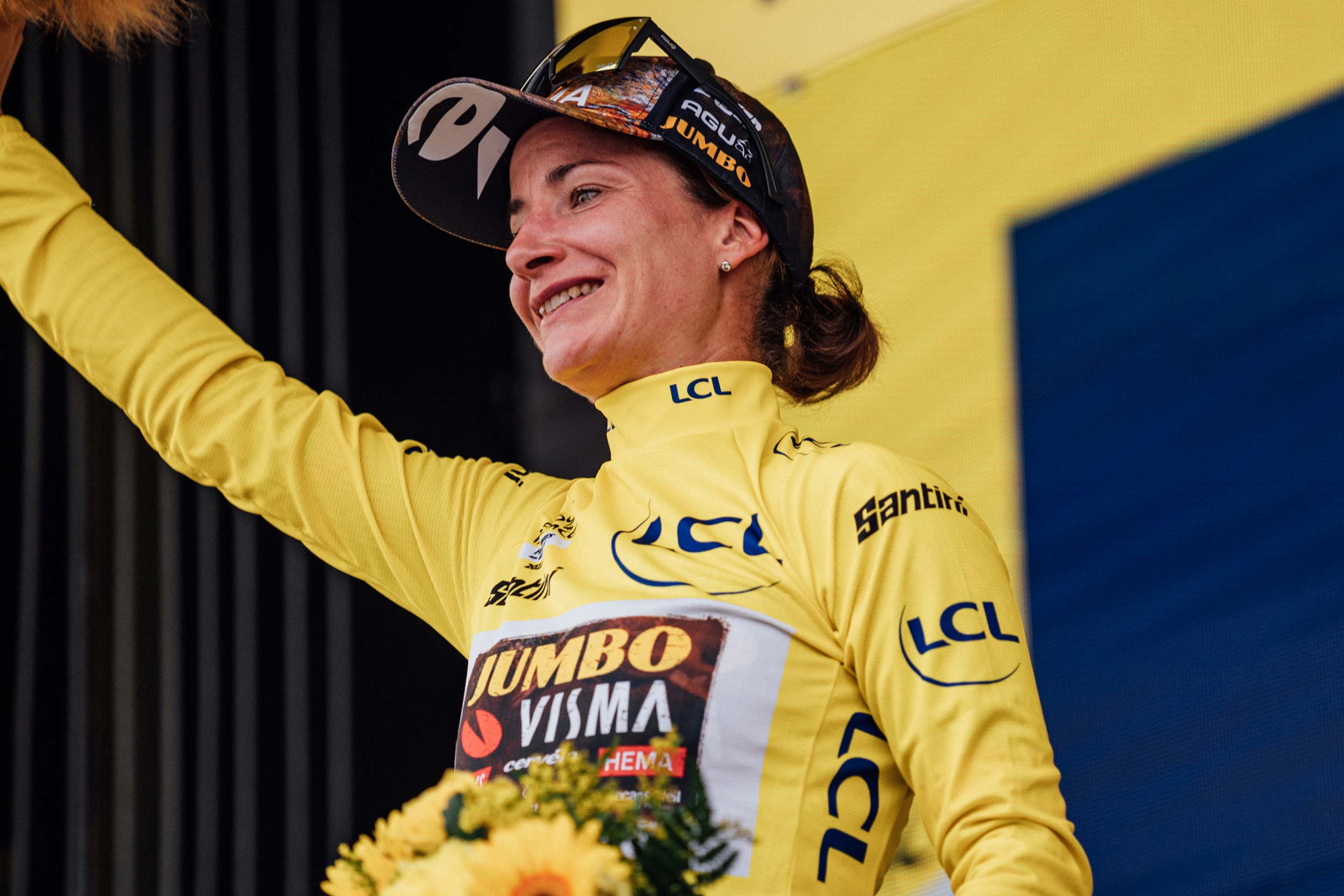 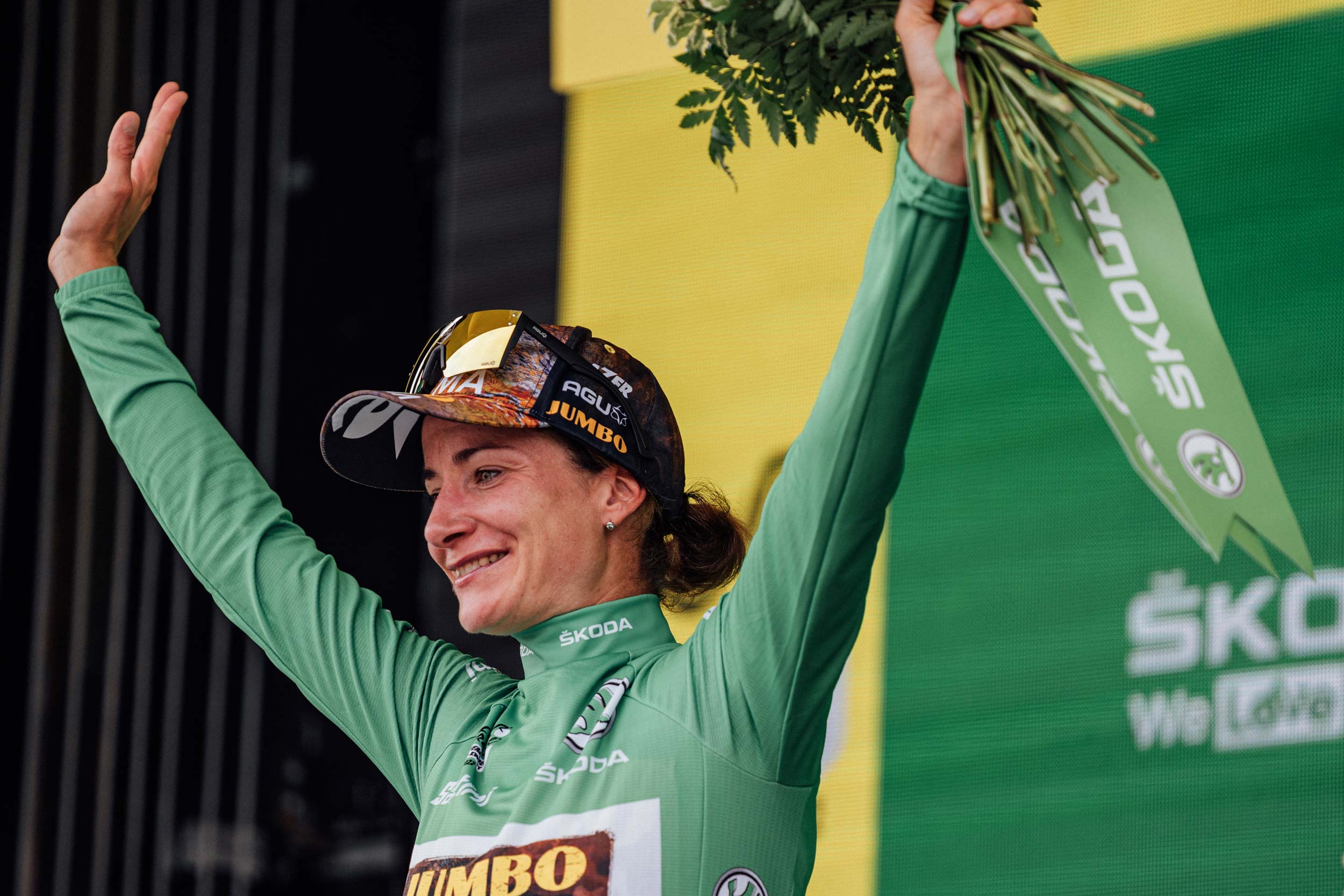