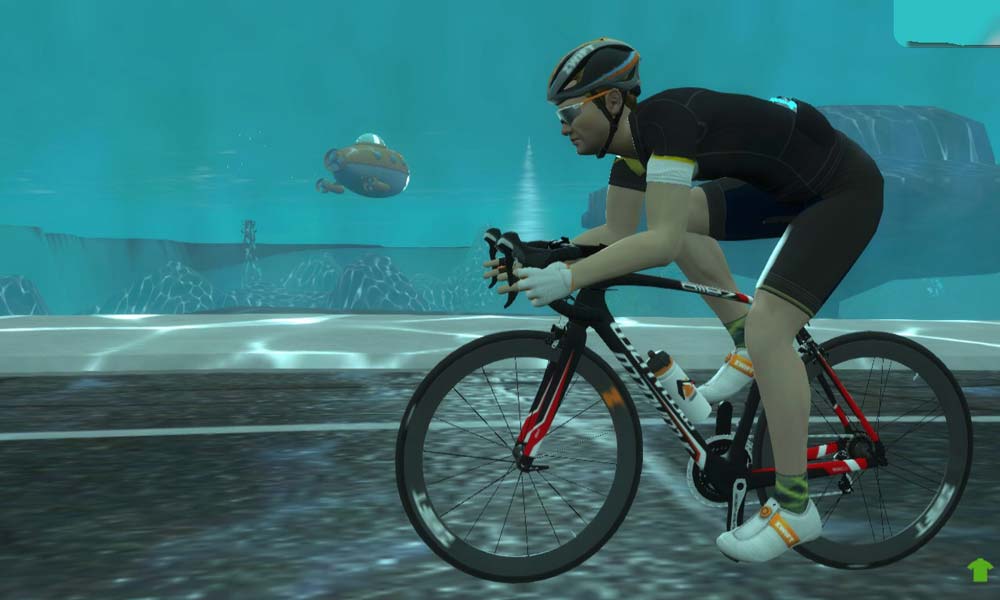 He’d used a home trainer for years but the appeal soon faded but Graham Springett is back on the bike in a room. He tells the story of his conversion to Zwift…

We are all of us creatures of habit, it’s the way we are made. Cyclists, however, tend to be more stuck in their ways and that’s not surprising. We rely on our bikes in some very hazardous situations and it’s a safety mechanism which makes us stick to doing – or using – what we know works.

After all, who wants a puncture/broken chain/snapped frame/busted saddle when we’re riding at 70km/h down a hill, or cruising steady at the furthest point from home?

I’m just the same, but I do occasionally have some conversions on the road to Damascus from time to time.

The latest epiphany has witnessed perhaps a seismic shift in my cycling: I have learned to love the great indoors.

I used to work nightshifts on the local newspaper and I’d get home at midnight or 1.00am then hop straight on the indoor trainer. I had a man cave, a power meter, a telly and a pretty decent fluid trainer. It provided some quality exercise time – albeit at an odd hour – and it allowed me to unwind before getting some rest.

There would be intervals, steady rides, sprints, recovery spins, all done while keeping one eye on a DVD of Grange Hill or the 1986 Tour de France or The Young Ones. Sometimes I’d just listen to music.

And while it was done with purpose and it had numerous benefits, I confess: I got sick to the back teeth of it!

Structure is all well and good. It’s nice seeing numbers rise and I could sense that I was getting fit (while watching repeats of programming that had probably once been captured on VHS). But I only ever got to ride with real people at weekends.

During the week I was The Working Dad, sneaking in 90 minutes of misery and sweat while all around me was sleeping.

Then I cracked. I snapped clean in two and just couldn’t face another minute on the bloody trainer despite the joys of watching Keeley Hawes get stuck in 1980s London, solving crime. 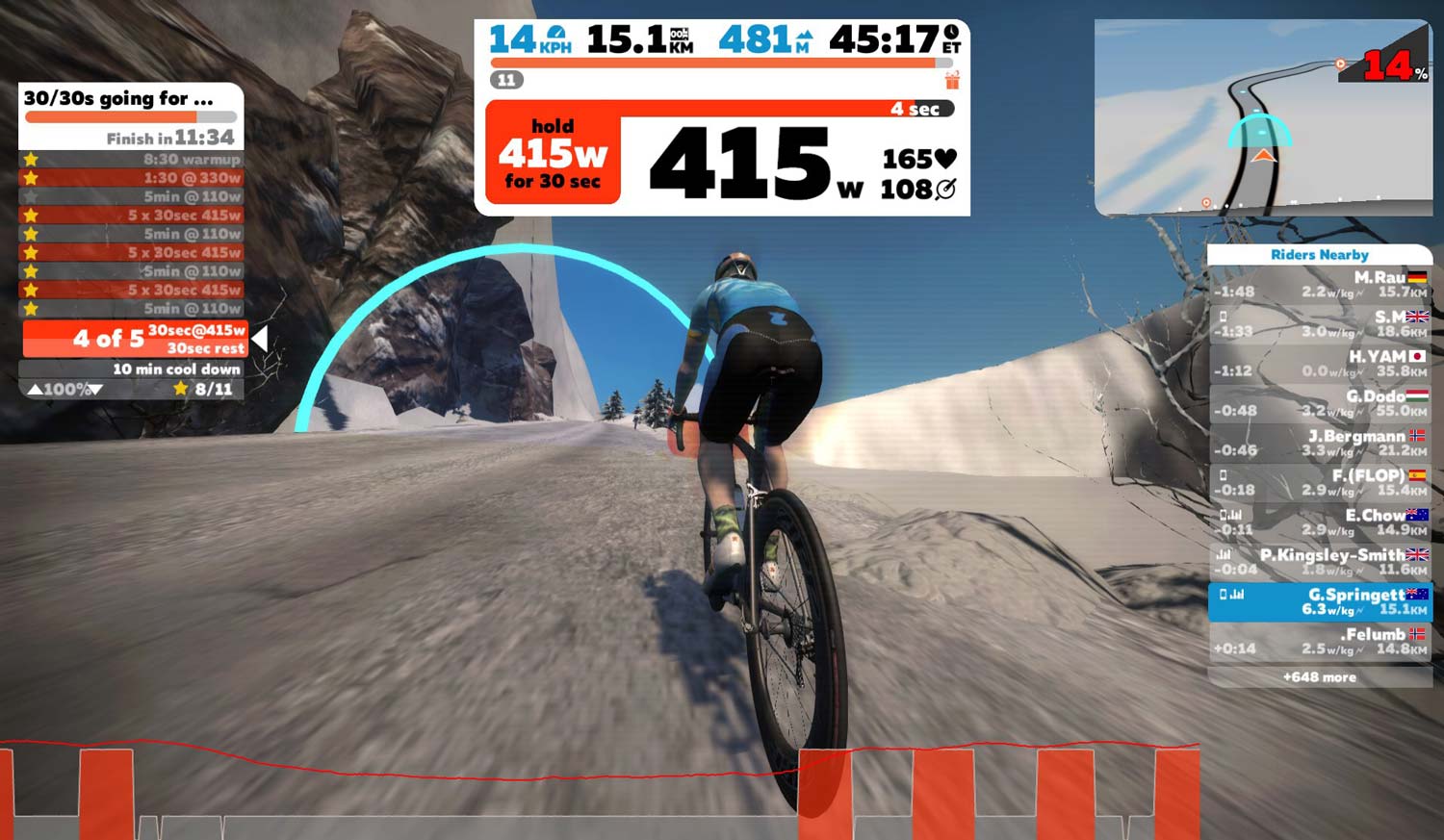 Zwift is a training tool that can also make cycling on your own in a room a surprisingly social activity.

Fortunately when I cracked about the “bloody trainer”, I was no longer working nights and so I was able to get up in the pre-dawn gloom and ride with mates. Winter and summer, we all met up and smashed each other to pieces on our bikes on a real road, completely ignoring training structure but having a ball doing it.

This most recent winter, though, just seemed to drag on for far too long.

It had been around zero or two degrees for what seemed like six months and I thought ‘Bugger this, I’m going on the indoor trainer.’

Now, I’d been loaned a KICKR smart trainer to play with but, for the warmer months, it had lain untouched. ‘Why suffer indoors,’ I thought, ‘when there are mates and high speeds to be conquered?’

But I suddenly had an urge to be indoors where it was not freezing, it was not misty or foggy, where I was not going to get painfully numb feet…

I signed up to Zwift just, as you do, to see what it was all about. 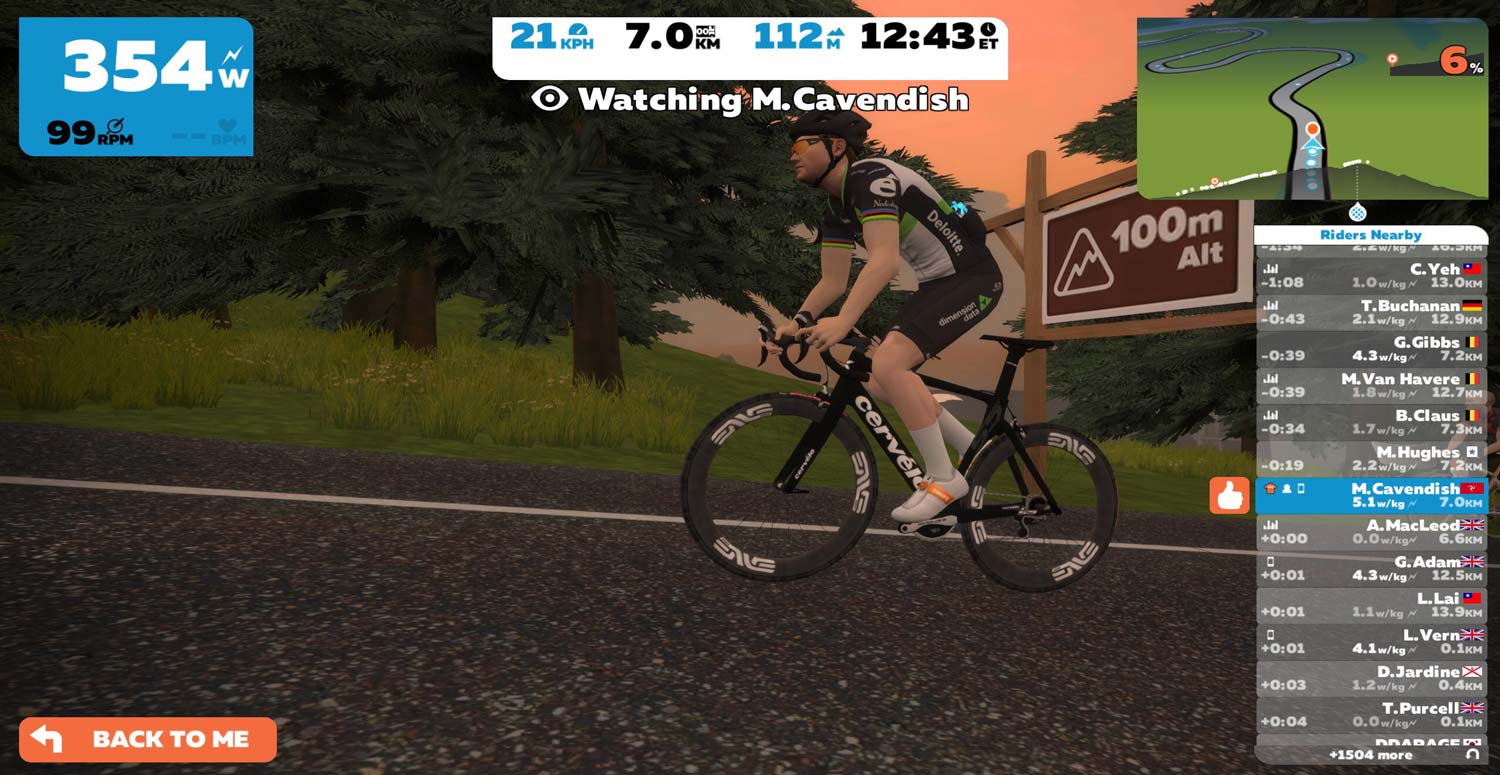 Team Dimension Data has been a big supporter of Zwift and its riders, including 2011 world champion Mark Cavendish, can often be found on Watopia – complete with rainbow stripes on his avatar’s sleeves (above).

I rode round Watopia. I went up hills and it got harder to pedal. I went downhill and it got easier. I sat on wheels and that was a nice way to go fast.

I looked at the mountains. I climbed them. I watched fish and manta rays swim past an impossibly large glass tunnel through which I was riding. I listened to birds, almost squinted as the sun broke through clouds and illuminated me. I even pulled that face you pull when it rains and you’re riding a bike… only that I wasn’t getting wet, not at all. It was, after all, just fictional rain falling on the screen in front of me as I pedalled along on a smart trainer.

It’s not a new concept and there are many who have discovered the joys of Zwift long before me, but now I’m part of that crowd. I was resistant to the concept, but now I’m a convert. (And I’m sure I’m not the only one who’s made that statement.)

I felt like I had gone down a rabbit hole and into a utopia created just for bike riders.

There’d be other riders and other courses. And each one lures you in for different reasons.

I rode round London – my home town – and I knew exactly where I was just by looking at the landmarks and buildings. I rode up Box Hill, a lump I have ridden for real a zillion times. Then I tried Richmond in Virginia and enjoyed riding in a bunch at 45 kilometres an hour. I laughed and whooped and took screengrabs. I did intervals and created my own interval sessions and gave ‘Ride Ons’ and marvelled at the castle on Watopia as I heard my wheels buzz over the cobbles or over planks of wood, then I tried to get a good screengrab of the Spruce Goose (look it up) as it floated by a jetty. I even stopped at a village just to study the architecture.

In a world – the real one – where riding on the road is getting increasingly highlighted as hazardous, and where sometimes you just don’t feel safe, Zwift opens up countless opportunities to enjoy riding your bike in perfect safety.

I have now formed a new habit, Zwifting. Yes, it’s a verb.

I’m still tracking my workload and still getting kudos, because Zwift connects to all your favourite online cycling platforms, but I’m now choosing to ride indoors even though it’s nice outside because I just like looking at the scenery and exploring, enjoying all the eye candy and knowing that I’m riding as part of a global community. Heck, my brother in London was watching me ride while I was in a garage in Wagga.

He’s signing up on Zwift after my delighted ravings because training to ride L’Etape du Tour when you live in London in winter is, how shall I phrase it? Bloody awful.

Been there, in the rain and dark in winter, and it sucks massively.

Zwift has injected a whole new enthusiasm into my 30-year-old habit. I’m getting a bit of ribbing about not being allowed out of the house, but I’m also forming new bonds in the virtual world.

The company has just released a new map, a Mayan jungle, so I’m currently engrossed exploring that and enjoying more new pretty things to look at, all while building fitness in the security of my garage.

I’m not getting any younger and as you get older you tend to think more about your own fragility.

Of course I’ll still do bunch rides at weekends and during the week, because they’re still fun and exhilarating.

But there’s something special about being safely ensconced in the middle of 200 riders from around the world on the 2015 world championship course, or chasing a rider from Canada up a half-hour climb past villages, fountains, trees and patches of snow which, for me, is completely and utterly irresistible. 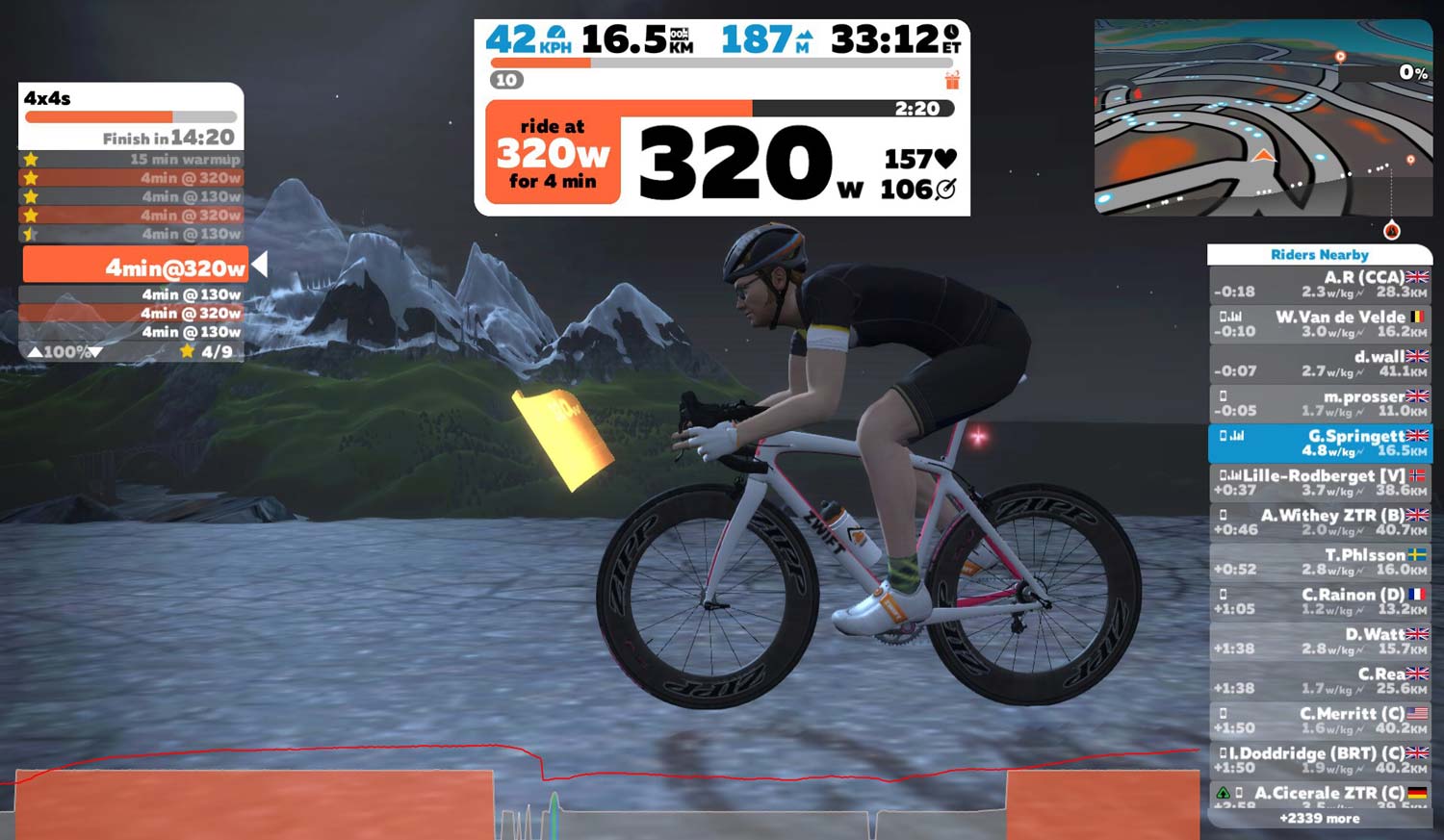 *Note: this is not a paid promotion. It is simply a first-hand account of someone who surprised himself with how much he enjoyed a new form of training.