Went for a Sunday ride in rotten weather. Bumped into a couple of blokes on their bikes. Talked about tyres with one of them, and a new gravel bike frame with the other…

Back in Sydney after the #RoadTrip to Glen Innes and Saturday was spent riding inside. The home trainer got a workout again after almost two months of neglect (since the end of the Sydney lockdown of 2021). The weather gods insisted on applying a bit of logic and seeking some shelter… but on Sunday, even though it was windy and the roads were wet, I couldn’t resist going for a ride outside again.

I set off early with a new pair of knicks from MAAP and no real direction. If I stayed dry, it would be a bonus. (Just so happened that I did, so all’s well that ends well.)

The knicks are terrific: as tight and snug as I remember MAAP kit to be, and with a lovely ridged effect on much of the legging. Apparently the “Unique 3D Aero structured fabric delivers firm compression for our closest to skin fit”. So says the blurb on the site, but I only know that now because I looked for an explanation after having been for my ride. 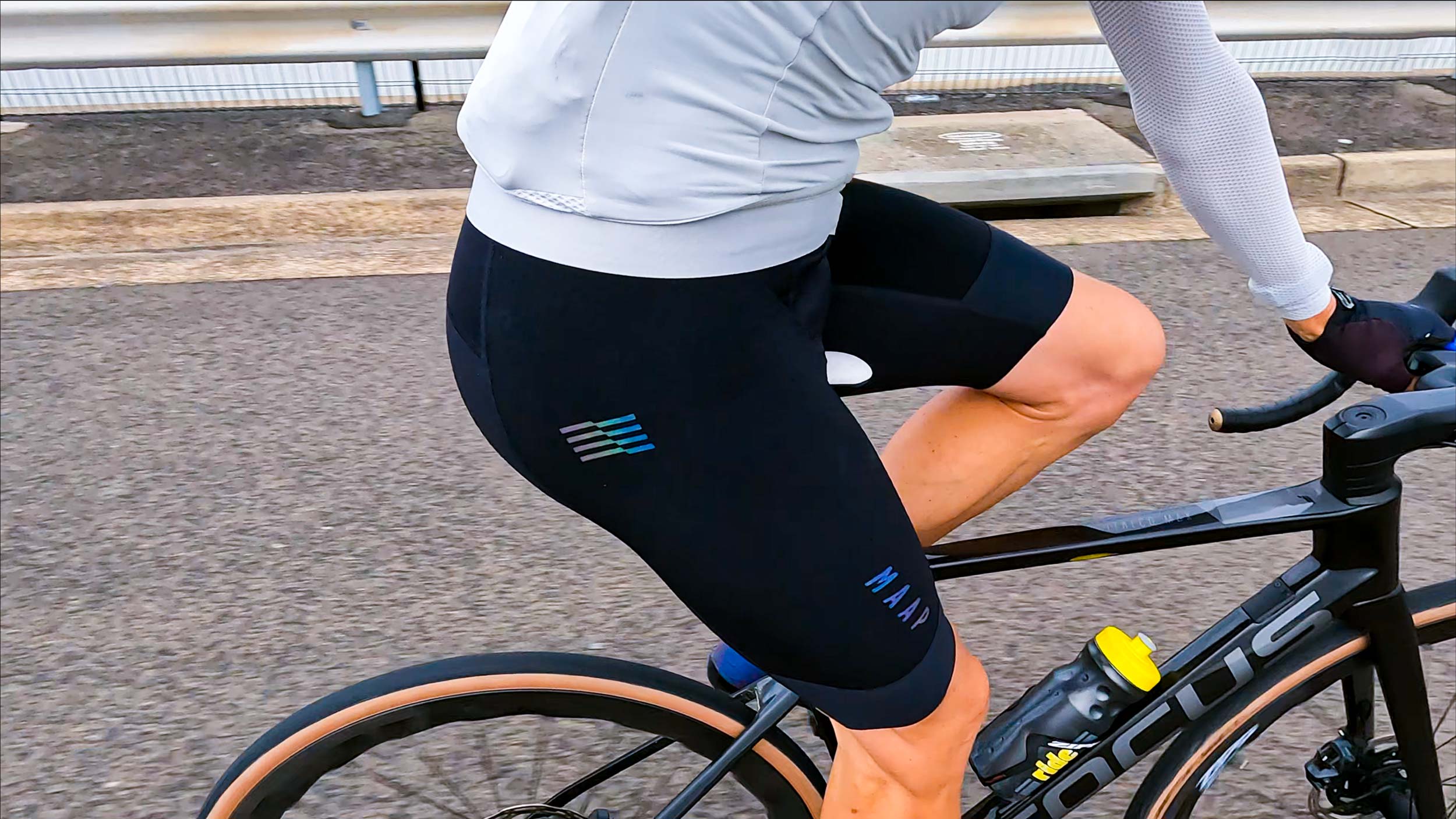 What I can tell you is that they have the usual broad length of gripper at the base, but the actual gripping bit (ie. the stickier material on the inside of the knicks) doesn’t go all the way around your leg. The section that’s not the “3D Aero structured fabric” has no gripper. But yes, it remains neatly in position.

(Note: I have done a separate unbagging video, capturing my first impressions upon seeing the Pro Bib 2.0. I’ll edit and upload this to YouTube in the coming days.)

It wasn’t a long Sunday ride but it was a good one that included a few coincidental meetings: first with Ryan O’Keefe who was squeezing in some quick kilometres before taking his kids to nippers; and, later, with Michael – the owner of a schmick new Crust gravel bike. 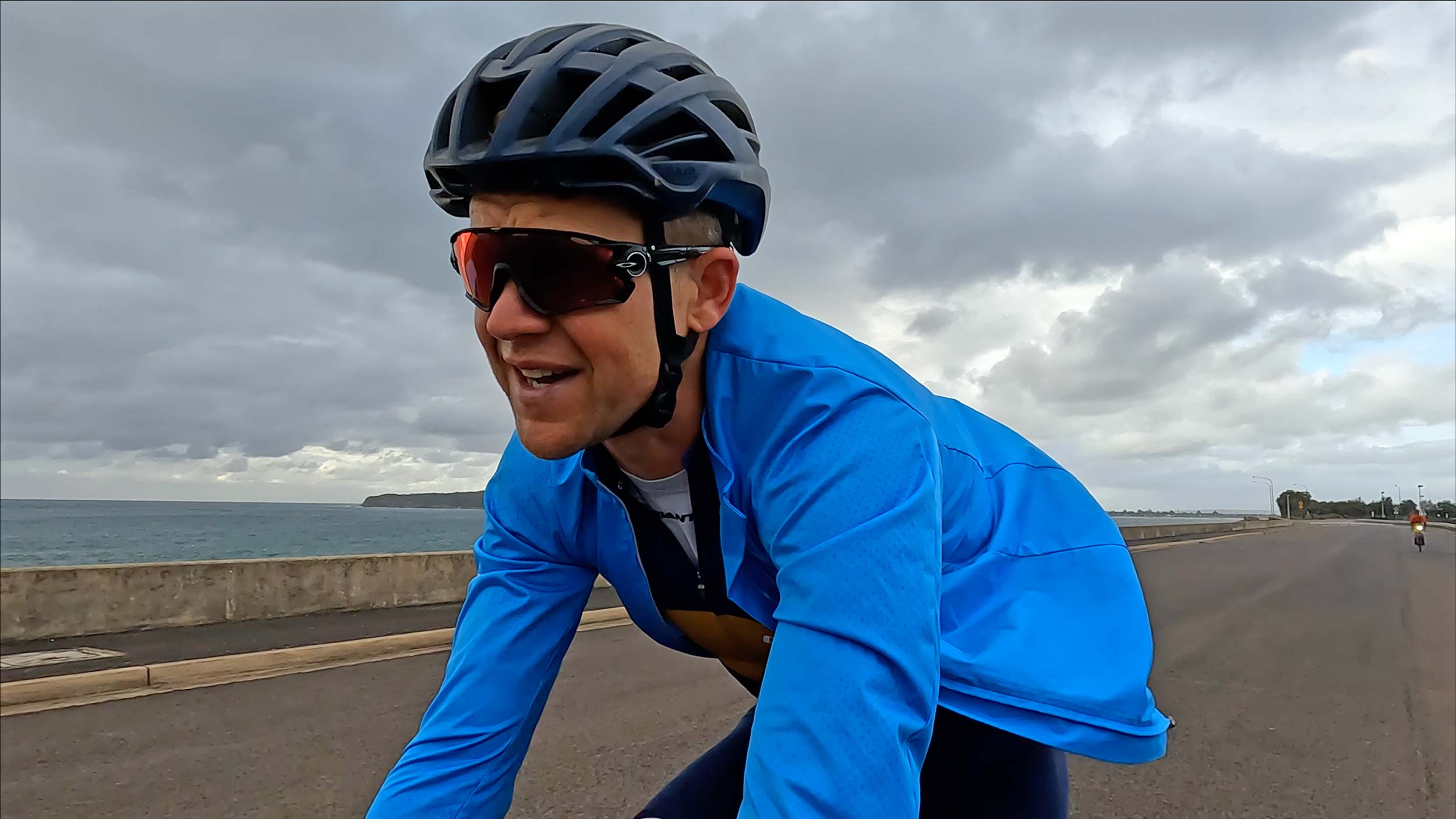 Ryan O’Keefe will be doing a series of product reviews for RIDE Media this summer. In the video for this #StoryOfMyRide, he offers a quick summary of his early impressions of the Continental GP5000 TR tyres.

Suddenly, the ride that was meant for me to clear my mind and get a taste of what the new knicks were like included a few extra elements. I pulled out the camera and did a couple of impromptu interviews.

Ryan is going to be doing some product reviews for RIDE Media and we started things off not too long ago with the fitting of some tubeless tyres. He has a pair of 25mm Continental GP5000 TR (‘tubeless ready’) which he put on the hookless rims on one of his Giant bikes. Unfortunately he didn’t get far before getting his first puncture – a slash on the tyre that the sealant couldn’t remedy mid-ride.

O’Keefe’s comments on the Continental tyres

A feature of the GP5000 TR tyres, I was told when handed the review pair by Manfred Otto of TMO Sports (agents for Continental in Australia), is that they are easier to get on (and off) the rim than the TL equivalent. Ryan confirmed this when we spoke about the puncture incident during our ride on Sunday.

“I needed to stop and put a tube in,” he explained.

“How was it getting the tyres off mid-ride?”

“Not too bad at all,” he confirmed. “Not much of a wrestle and the repair was done without any fuss.” 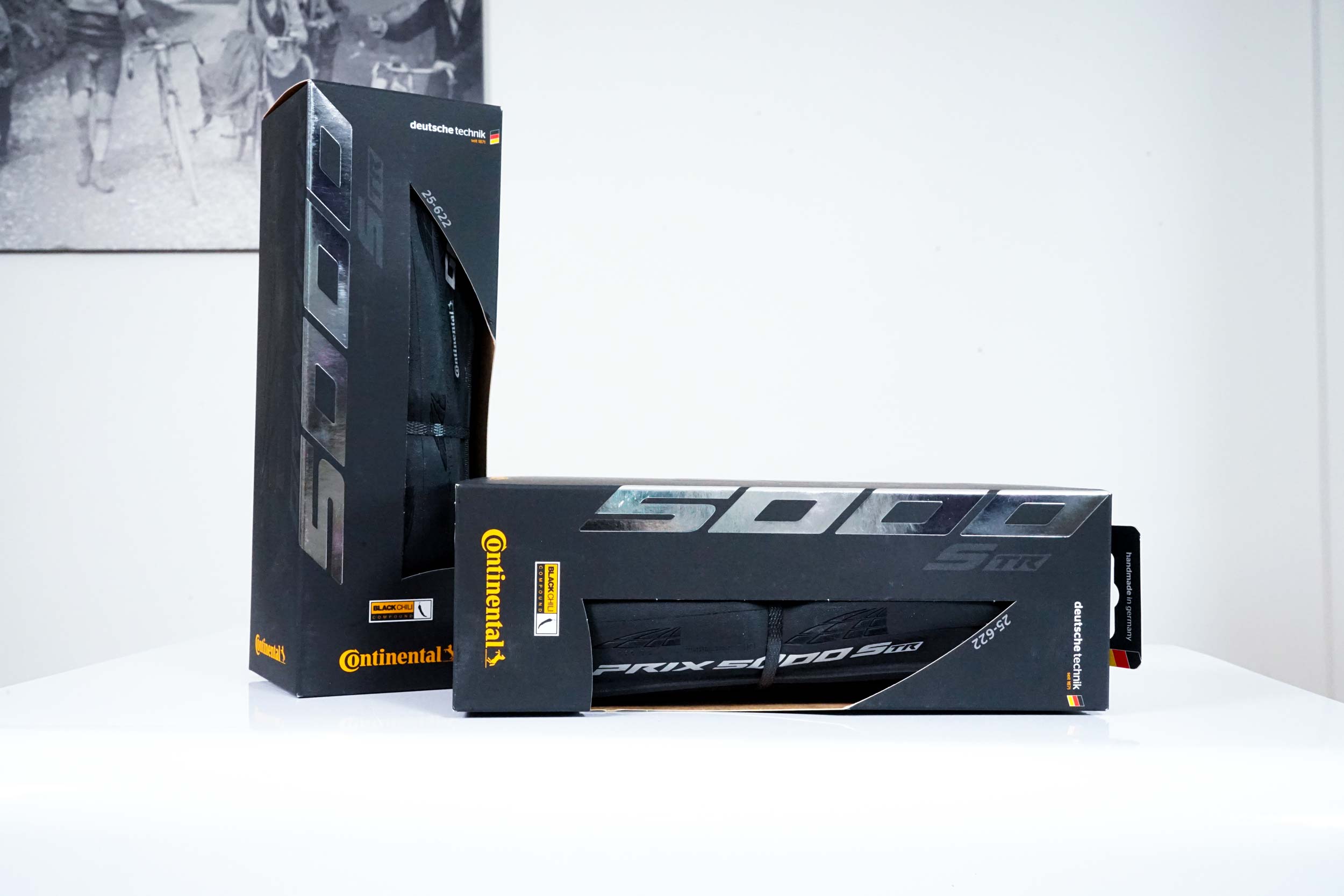 In the video, Ryan offers other thoughts on the Conti tyres while we ride back towards the city on the container terminal road near La Perouse. The upshot is this: the tyres have a great grip and they roll nicely… in a straight line. Around corners, however, Ryan believes they aren’t quite as good as other tyres he’s ridden.

“They were the 25mm,” he says during our quick interview on the ride. “I do reckon 25s are too small for those wheels so I will hold a bit of judgement until I try the 28mm. I think the 28s would be much better.

“They are really super soft,” he says of the compound. “You can see how they’d be a really good race tyre – you know: fast, light, supple – but for Sydney roads they are just too soft.

“I just didn’t feel super comfortable with them, especially when you’re accelerating and cornering hard, they felt really spongy and soft. You lose a bit of power out of them.

“When you roll along straight… they roll really nicely – really smooth and beautiful but I think for that really punchy sort of stuff, they just didn’t feel great. But again, I think I’d have to see what the 28s feel like on the bike.” 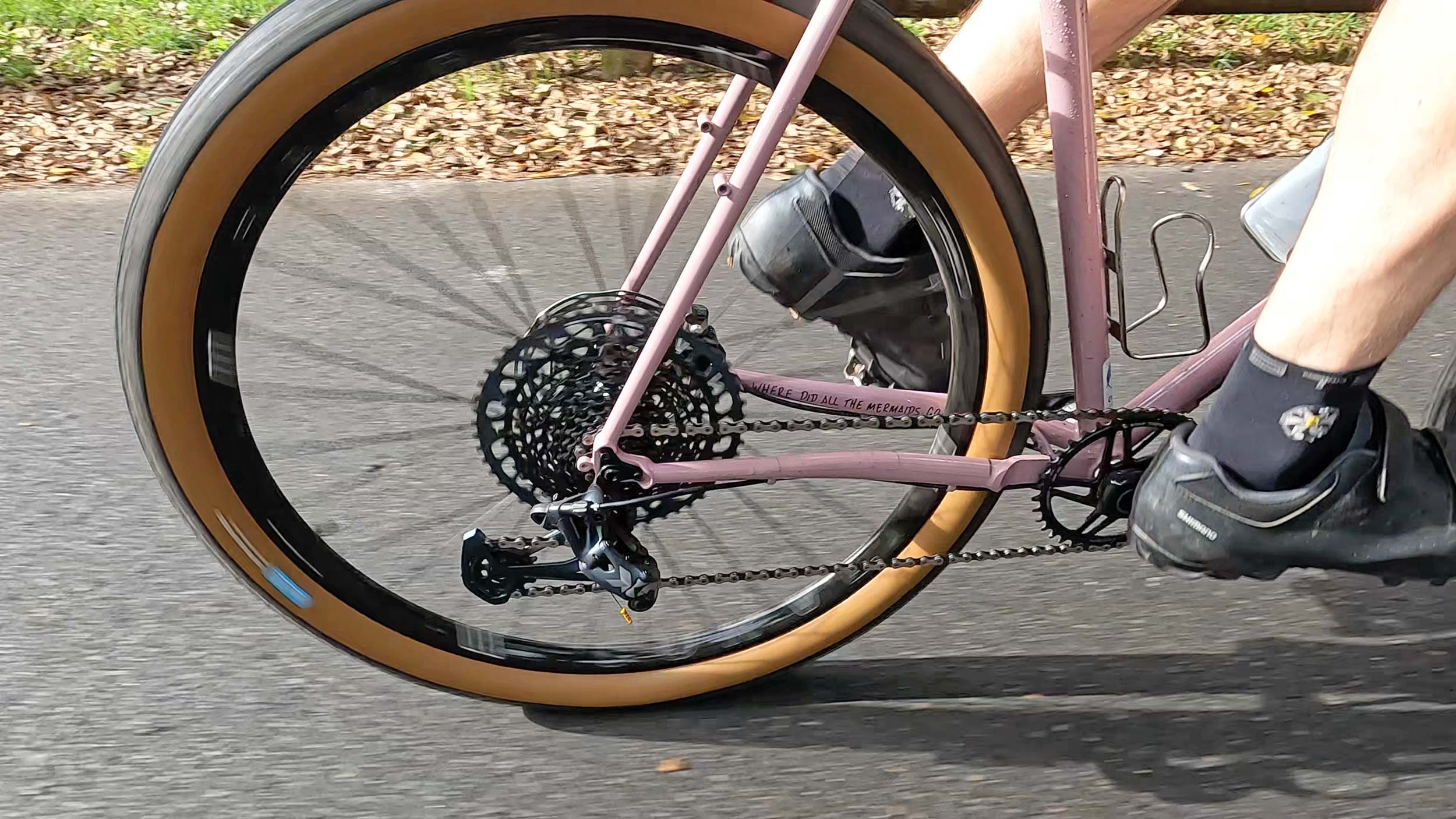 ‘Where did all the mermaids go?’ (Your guess is as good as mine, but Crust ask the question with a little graphic on the chain stays of the Bombora frame.

Michael and his Crust gravel bike

After the quick (coincidental) ride with Ryan, it was back into the city for a few laps around Centennial Park before getting on with the rest of my Sunday plans. Once in the park, the first rider I saw was Michael, the proud owner of a new Crust gravel bike. The pink frame caught my eye as he sped by with fat tyres and oversized handlebars.

After following his wheel for 100 metres, I rode up beside him and – as you do – commented, “Nice bike. New?”

“Yep. Haven’t even been on the gravel yet.”

“You should get to Glen Innes,” I told him almost immediately. I’d only been back in Sydney a few days after the road trip to Peter Teschner’s place. The roads of the NSW northern tablelands were fresh in my mind, and upon seeing the Crust bike in Centennial Park, I couldn’t help but suggest an ideal place for Michael to ride. 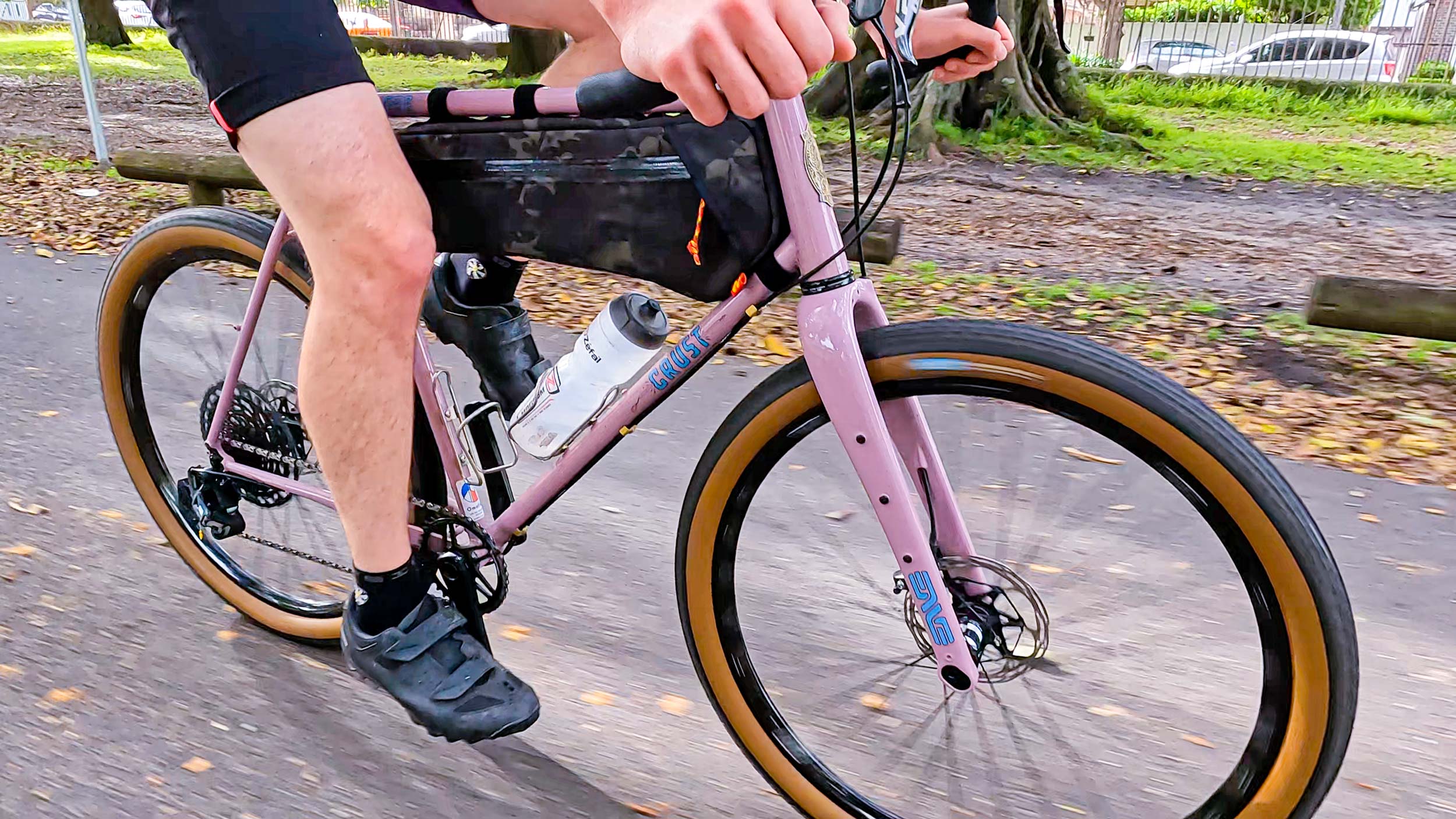 We got talking and after a lap of the park, he agreed to my request to film the bike and ask him a few questions about it.

“I was originally looking at a Curve bike,” he told me, “but availability is pretty bad.”

(That’s not a brand-specific comment, certainly not in 2021. The pandemic has dramatically impacted the supply chain and – stating the obvious – sourcing bikes or components is more difficult now than it has been in years.)

“A batch of these popped up in the States,” continued Michael with his story of his bike, “so, thanks to DHL, it was over here in about six days.

“I just wanted a bike that can do everything. I’m sick of the roadie, sick of the mountain bike – and just want a do-it-all.

“It’s the Crust Bombora frame with the ENVE fork. It’s running a 1x 12-speed mechanical, [SRAM] Eagle – so it’s the ratio kit to get that working with the shifters. The rest of it,” he continued, “is pretty low-end SRAM just because of availability and I sort of broke the budget on the frameset and the shipping.” 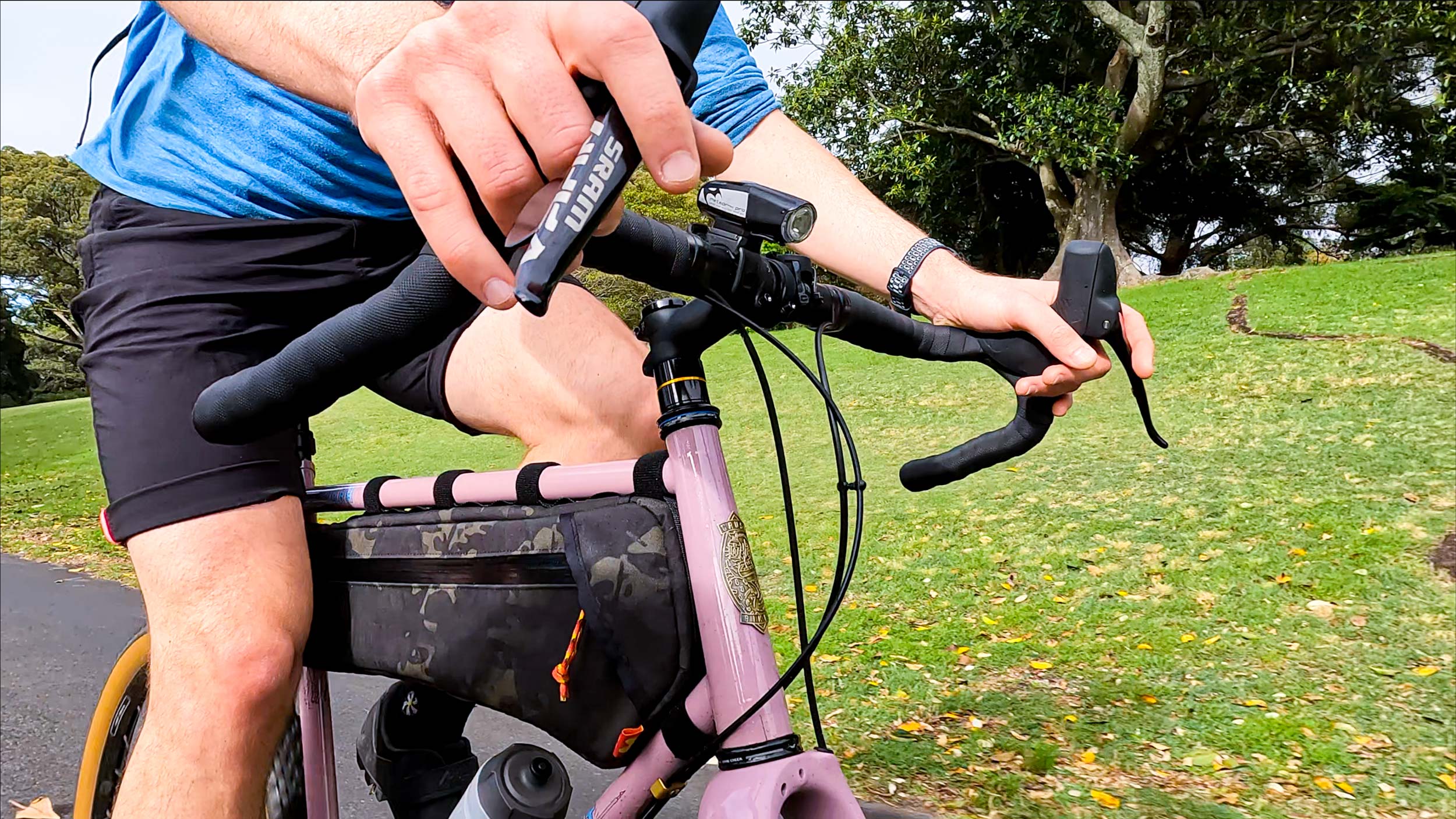 It was meant to be a quick, no-fuss ride – just me and my thoughts – but it became part two of a tyre review, with the added bonus of a quick chat about an interesting new bike.

Watch the video and you get to see Michael and his bike. The pictures tell much of the story but it’s great to get an overview of the motivation behind a purchase. To then see the size of the smile of a happy customer as he gets used to the new bike is also satisfying.