After finishing second in stages 1, 2 and 3, Wout van Aert scored a victory in stage 4. The leader of the Tour de France put on a masterclass of riding, going solo after a blistering Jumbo-Visma assault on the Cap Blanc-Nez climb 10km from the finish in Calais.

Here is part 4 of the #ZacWilliamsGalleries from Le Tour of 2022. 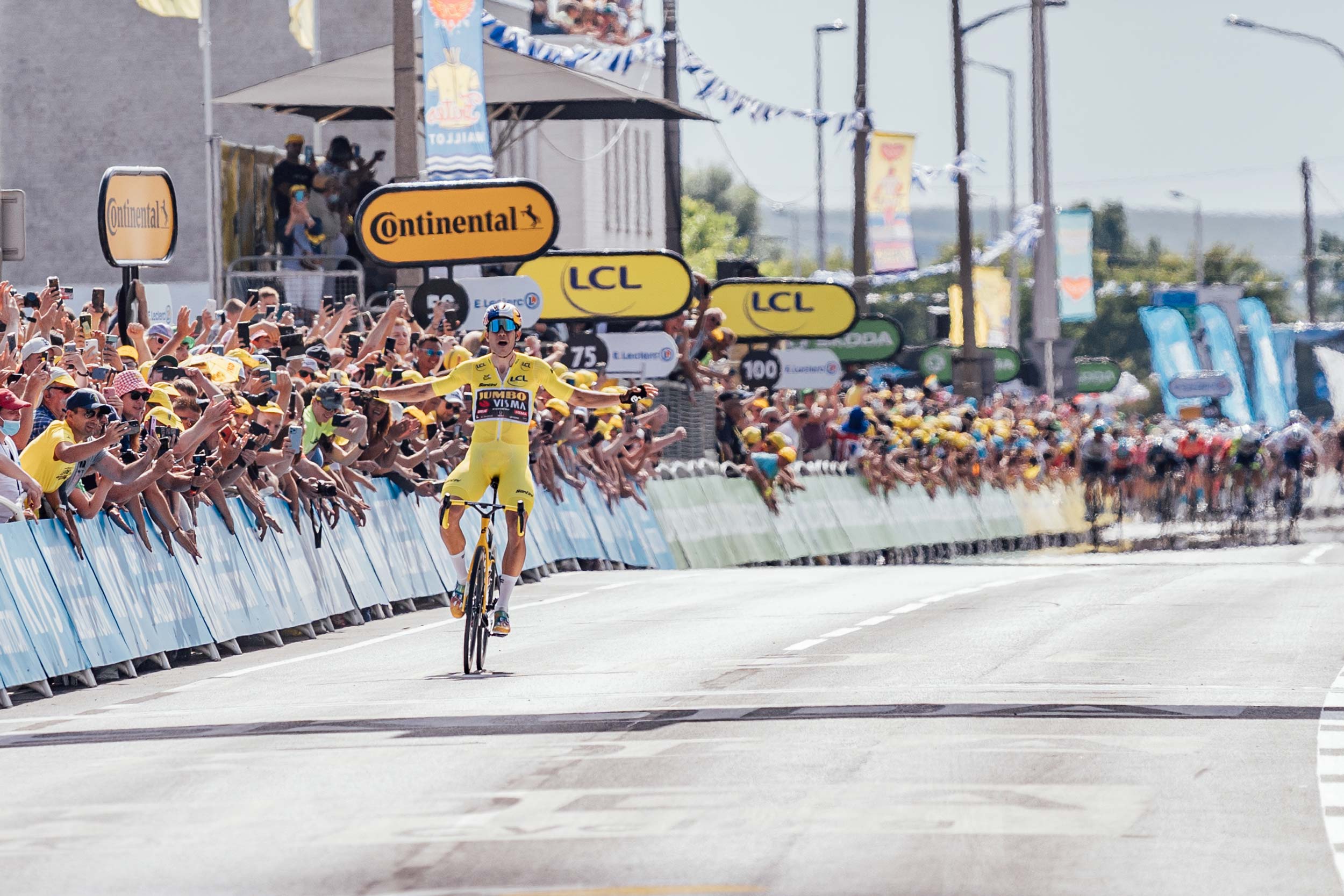 The photos suggest two riders enjoyed the taste of victory in the first stage of the 2022 Tour de France raced on French soil. Wout van Aert (above) was, however, the absolute star of the show. Meanwhile, Jasper Philipsen (below) was the embarrassed runner-up who crossed the line eight seconds behind his compatriot… but he celebrated in Calais thinking he’d scored his maiden TDF stage win.

“For five seconds, maybe less, I thought that I had won,” said Philipsen after realising his error. 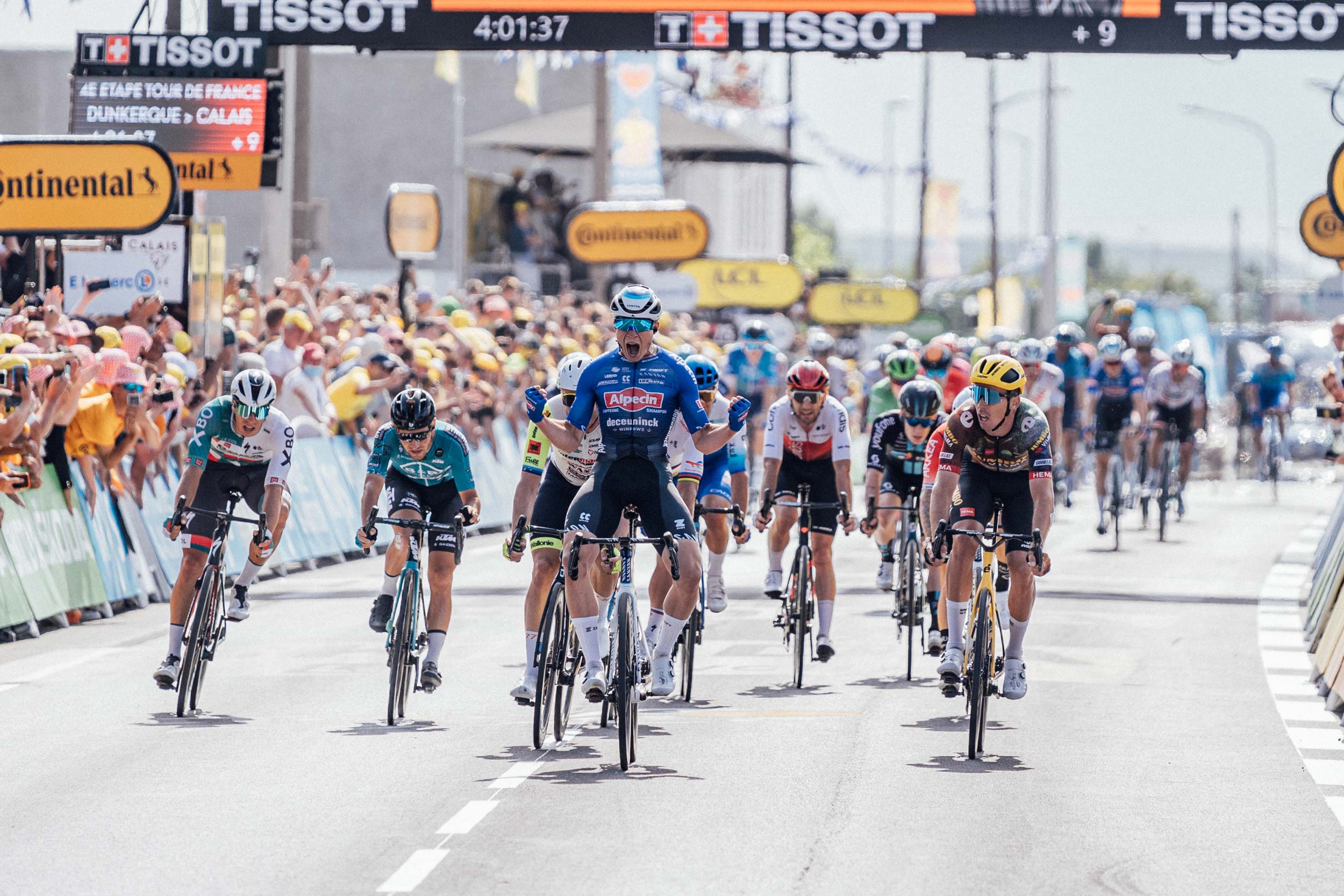 A short-lived celebration… Philipsen salutes what he thought was a victory, not knowing that Wout van Aert had already won the fourth stage eight seconds earlier. (Photos: Zac Williams) 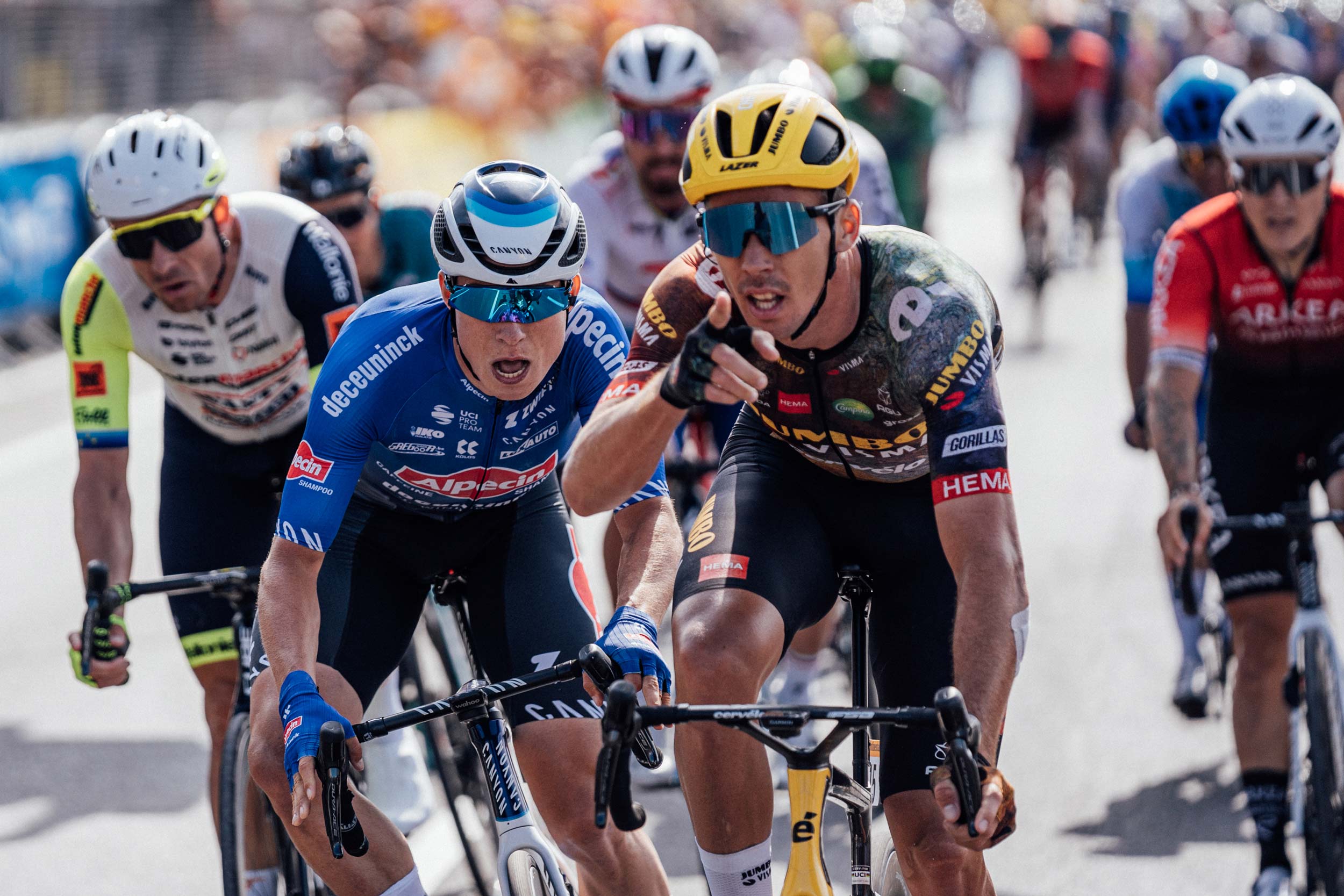 Moments after his celebration, Philipsen learned that he was second in the fourth stage. Christophe Laporte, who rounded out the podium of stage four, pointed up the road and a gobsmacked runner-up realised his error (above).

The cobbles of stage five lie in wait and we can expect to see more of the dominant Jumbo-Visma team which has already claimed second place in the three Danish stages, and – thanks to Wout van Aert – enjoyed three days in the lead of the general classification. The Belgian now also has a stage win in 2022 to his credit and we shouldn’t be surprised if he is in the mix again on the rough roads of Wednesday’s stage from Lille to Arenberg. 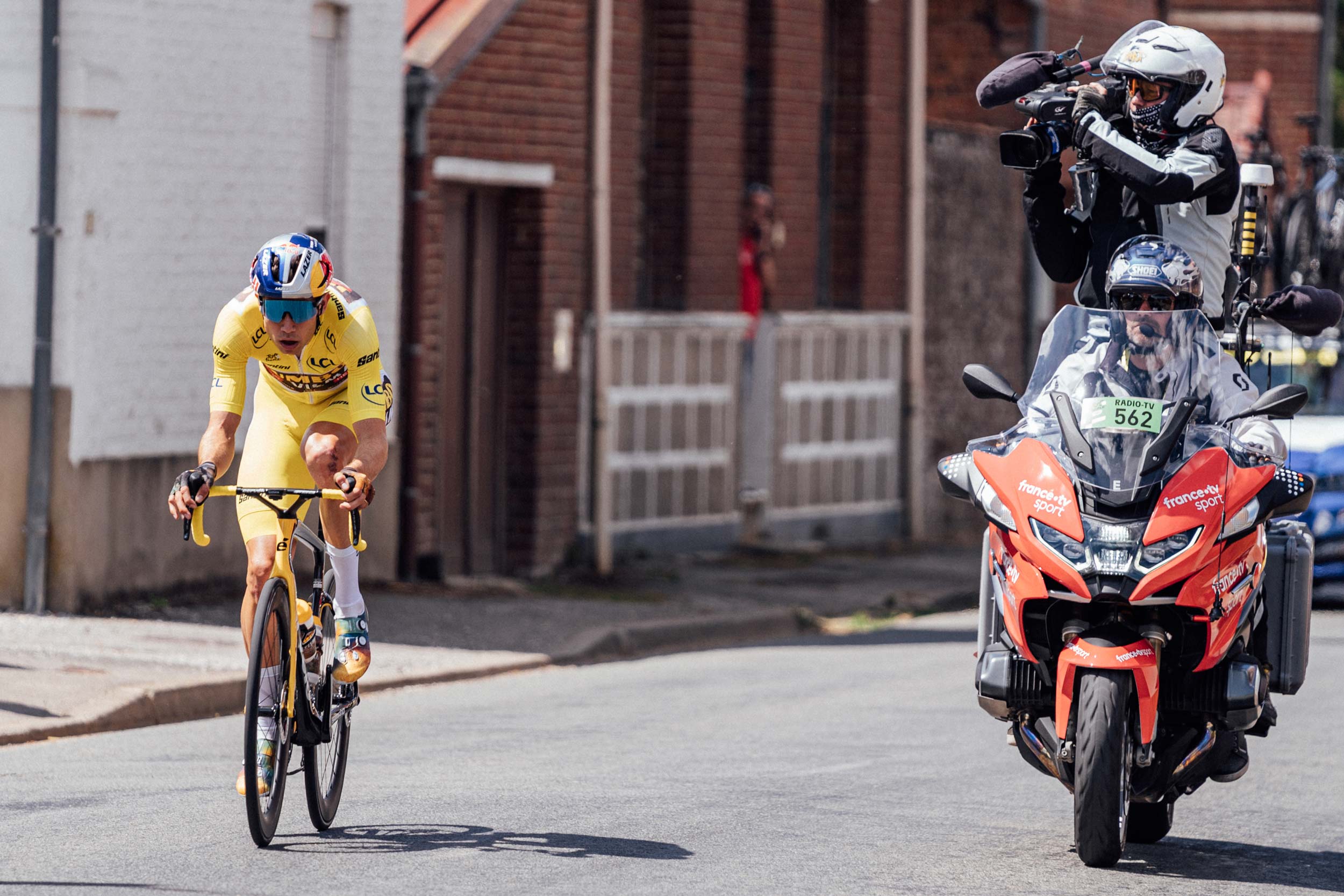 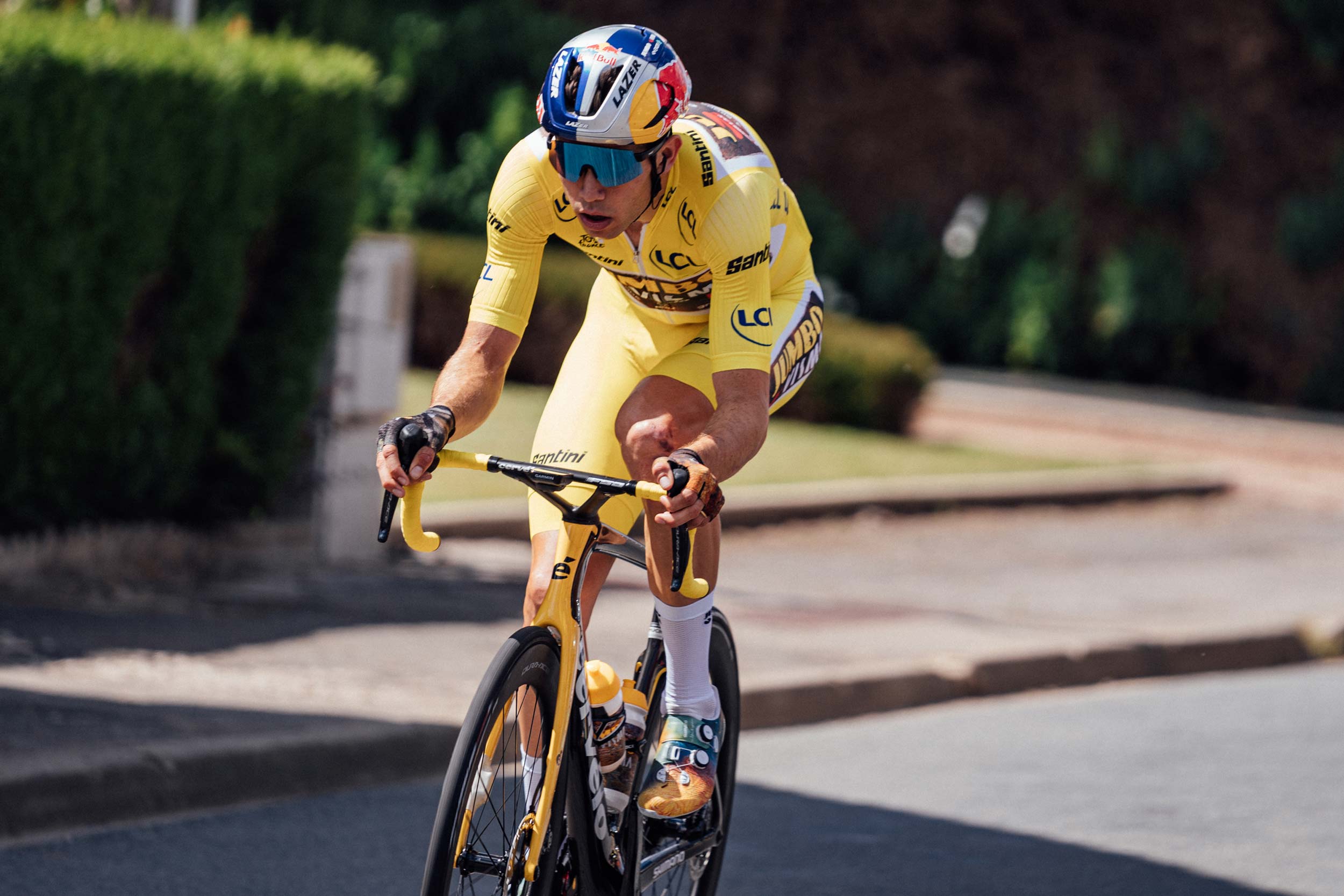 Wout van Aert has been the stand-out performer of Le Tour 2022: 2nd, 2nd, 2nd… 1st. What next? Considering his pedigree, he should be challenging for another win in stage five.

Jumbo-Visma set WvA up with a deliberate move on the Cap Blanc-Nez climb, a short rise that peaked around 10km from the finish of stage four. Nathan van Hooydonck then Jonas Vingegaard pulled the peloton to pieces with their effort on the 900m uphill ramp, and van Aert finished off the job. He eventually went solo after dropping Adam Yates – one of the GC men from the Ineos Grenadiers team – who desperately tried to match the pace of the rider in yellow. 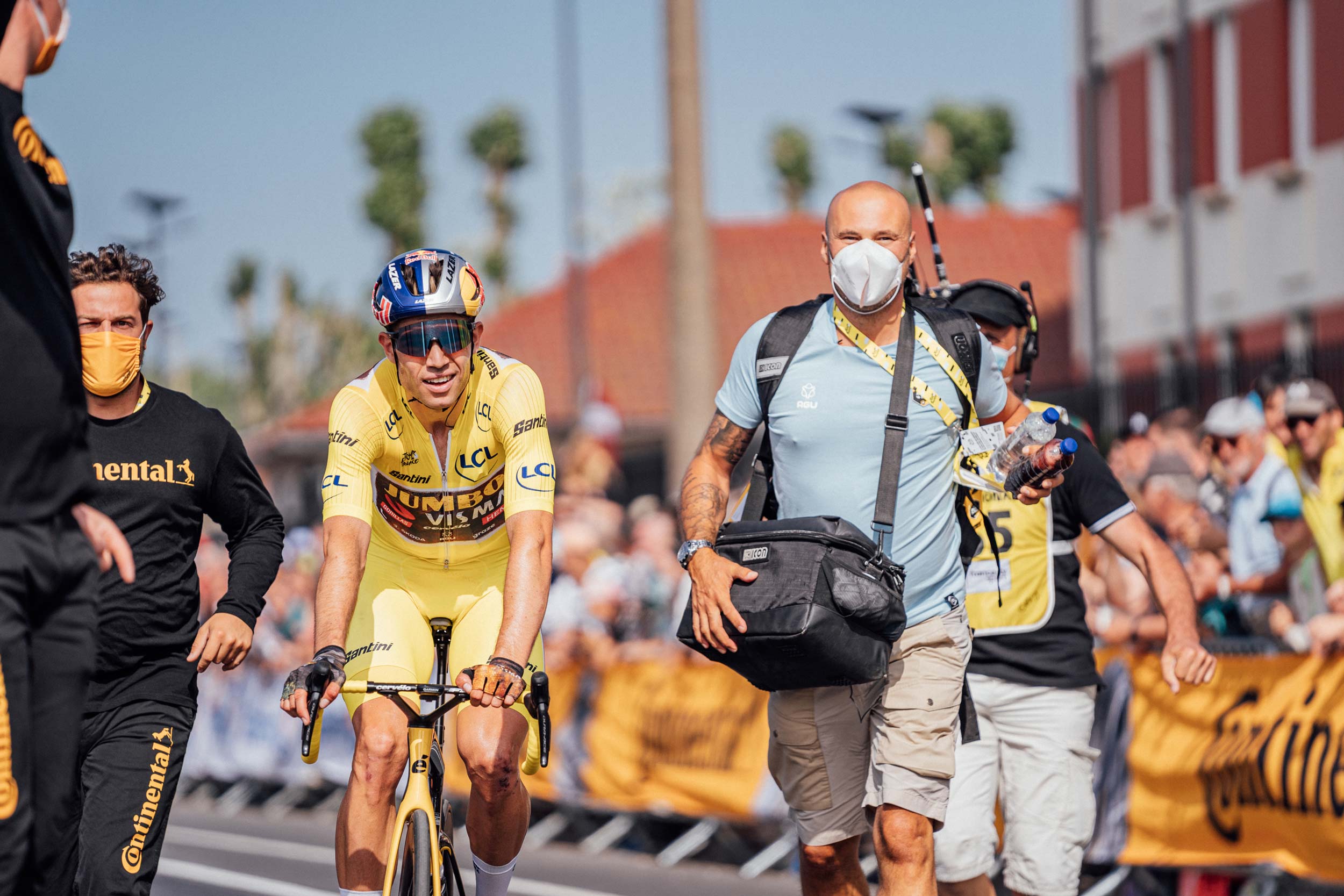 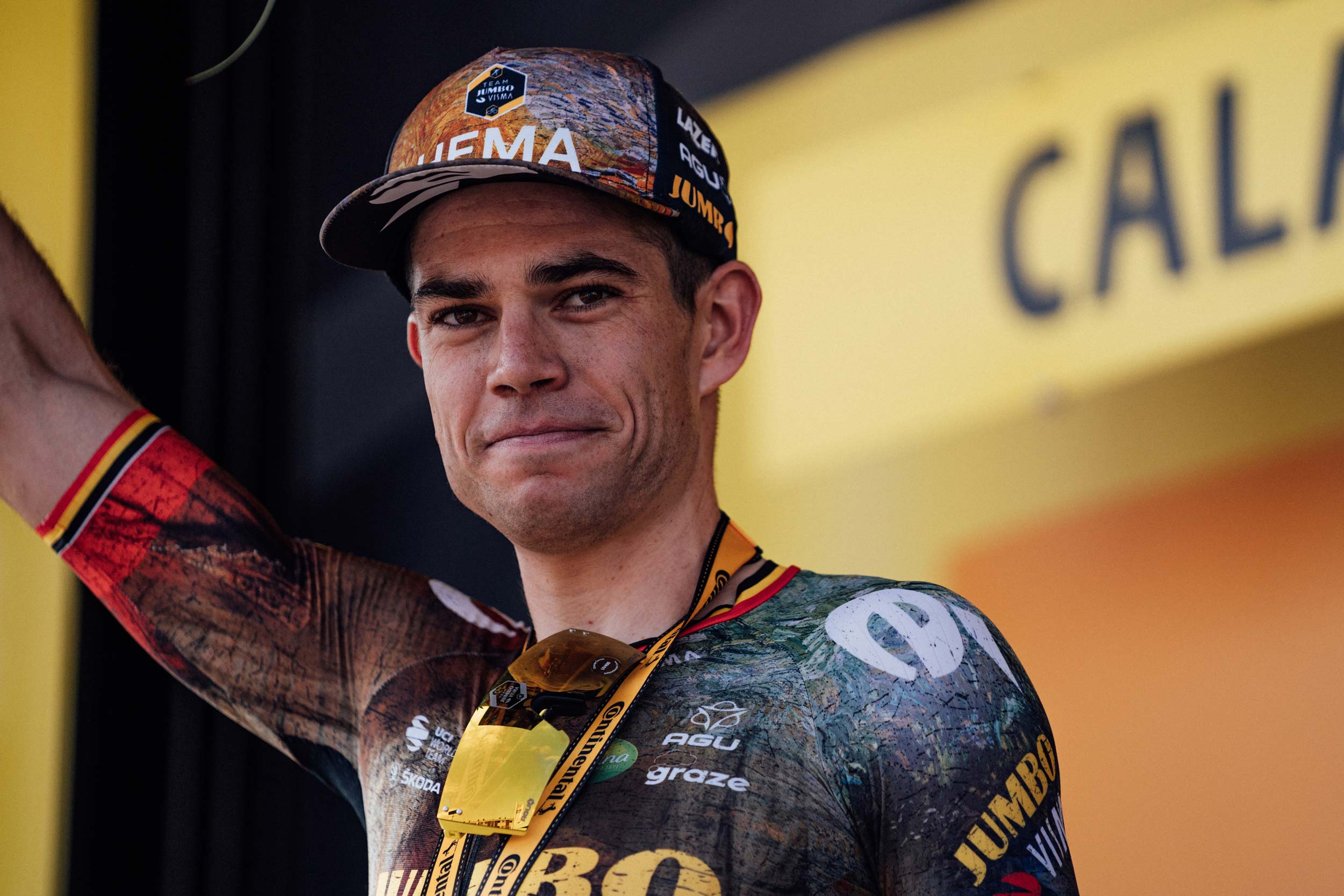 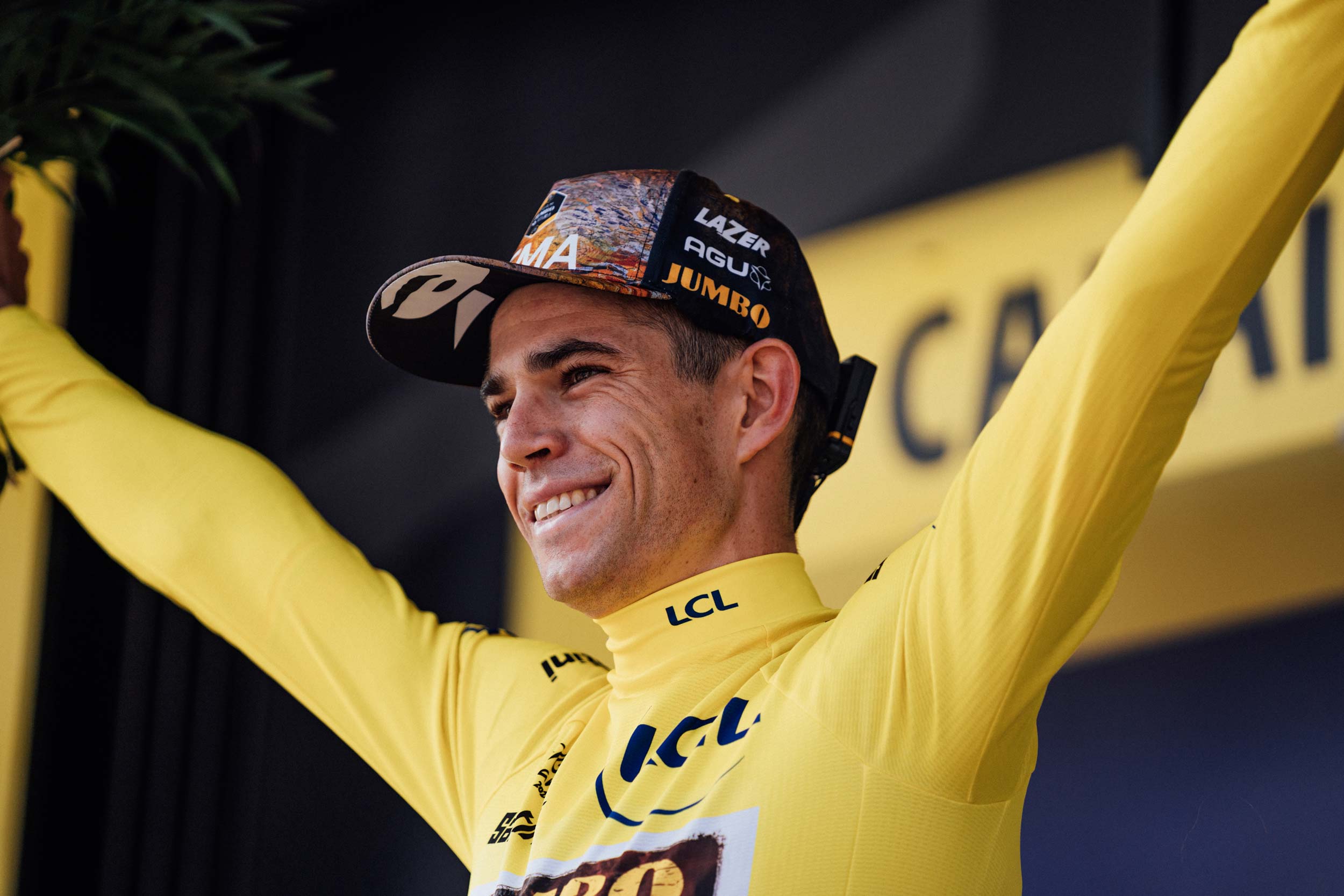 Jumbo-Visma is earning plenty of attention early in the 2022 race and it seems the team will be the star of the upcoming Netflix documentary series that is being filmed during the Tour this year. Back on the podium to collect another yellow jersey, and a stage winner’s trophy, van Aert can be seen with an extra element to his headwear (above). Is it a device to collect audio from the stage winner while he salutes the crowd?

Months out from the release of the Netflix series, we can already see considerably more tech on display than usual and, we can assume, there will be vision (and sound) that has not been collected before. The evolution of cycling continues, and leading the charge of the new generation of riders is WvA. He wears yellow, believes he can win green, and now he has won a Tour stage with a bold attack followed by a phenomenal solo effort. 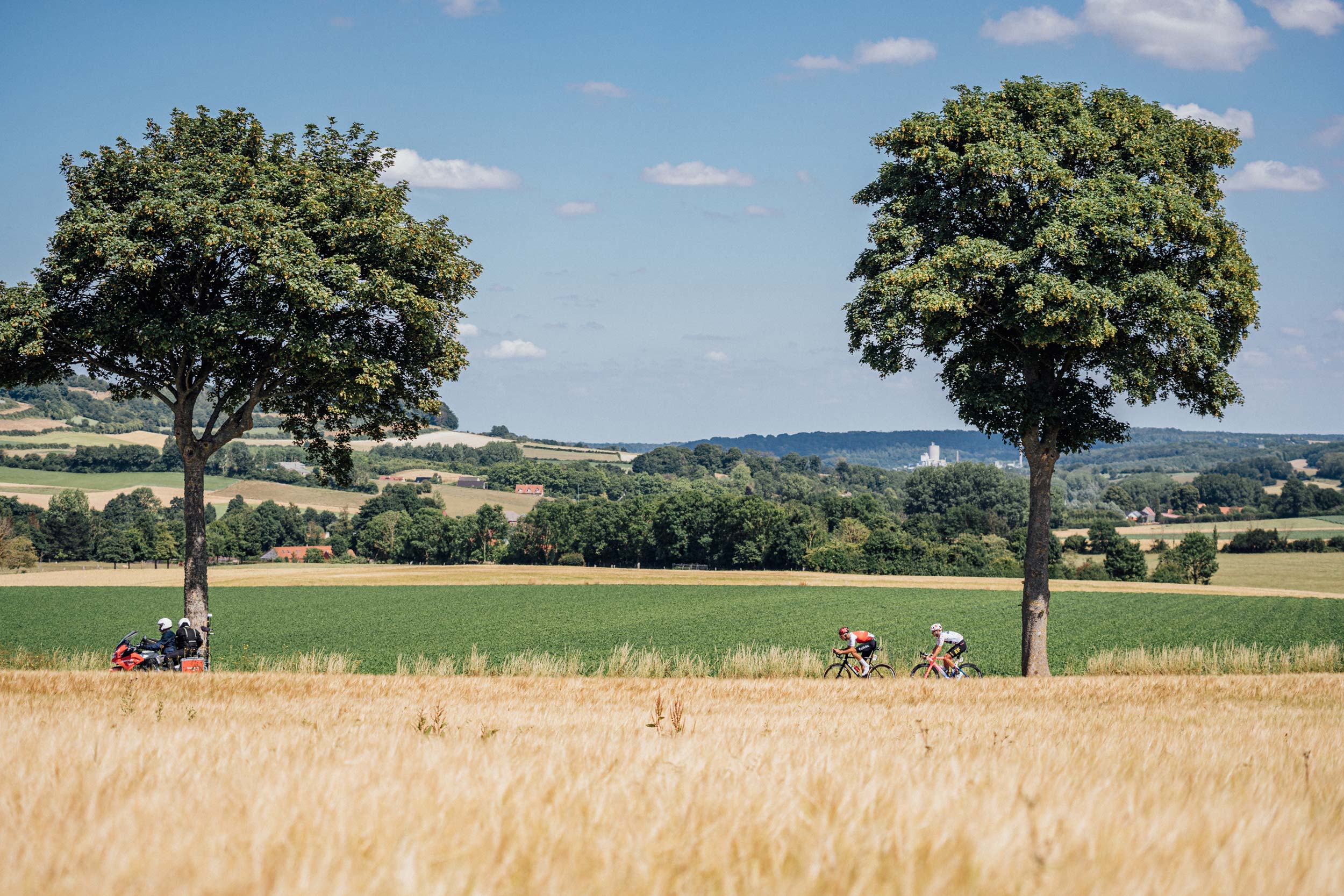 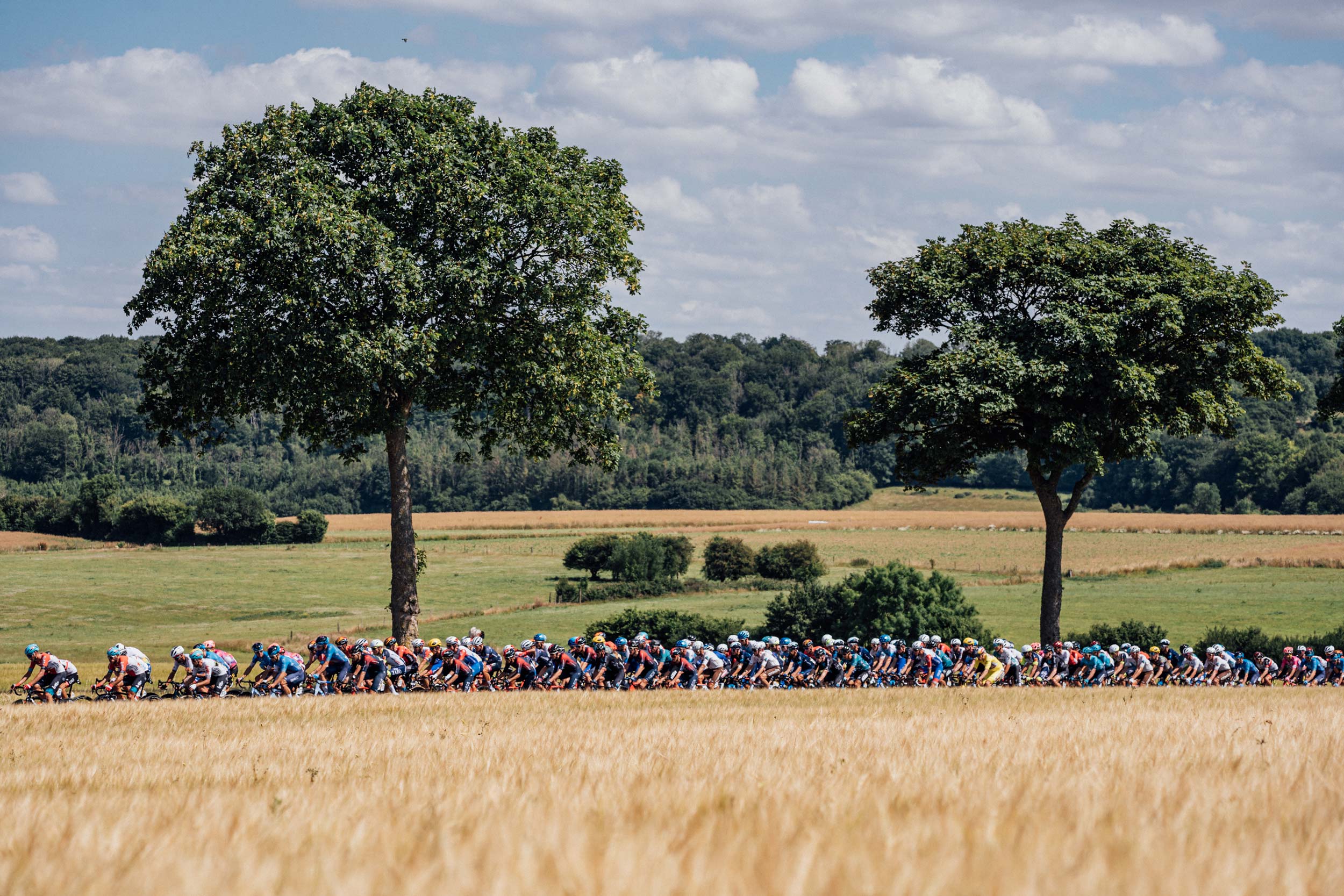 The early break again contained another irrepressible rider of Le Tour 2022: Magnus Cort joined Anthony Perez in an attack that enabled the Dane to add more climbing points to his tally. He increased his advantage in the race for the polka-dot jersey and seems to relish his status as King of the Hills.

The pavé will be the talking point on Wednesday. There’s considerable anticipation around what stage five will deliver but don’t be surprised if the rider in the yellow jersey is again in the mix. He can time trial, he can sprint, he can win on his own… and he has a strong record on rough roads. Wout van Aert can do it all and he only seems to be getting stronger the longer this race goes on. 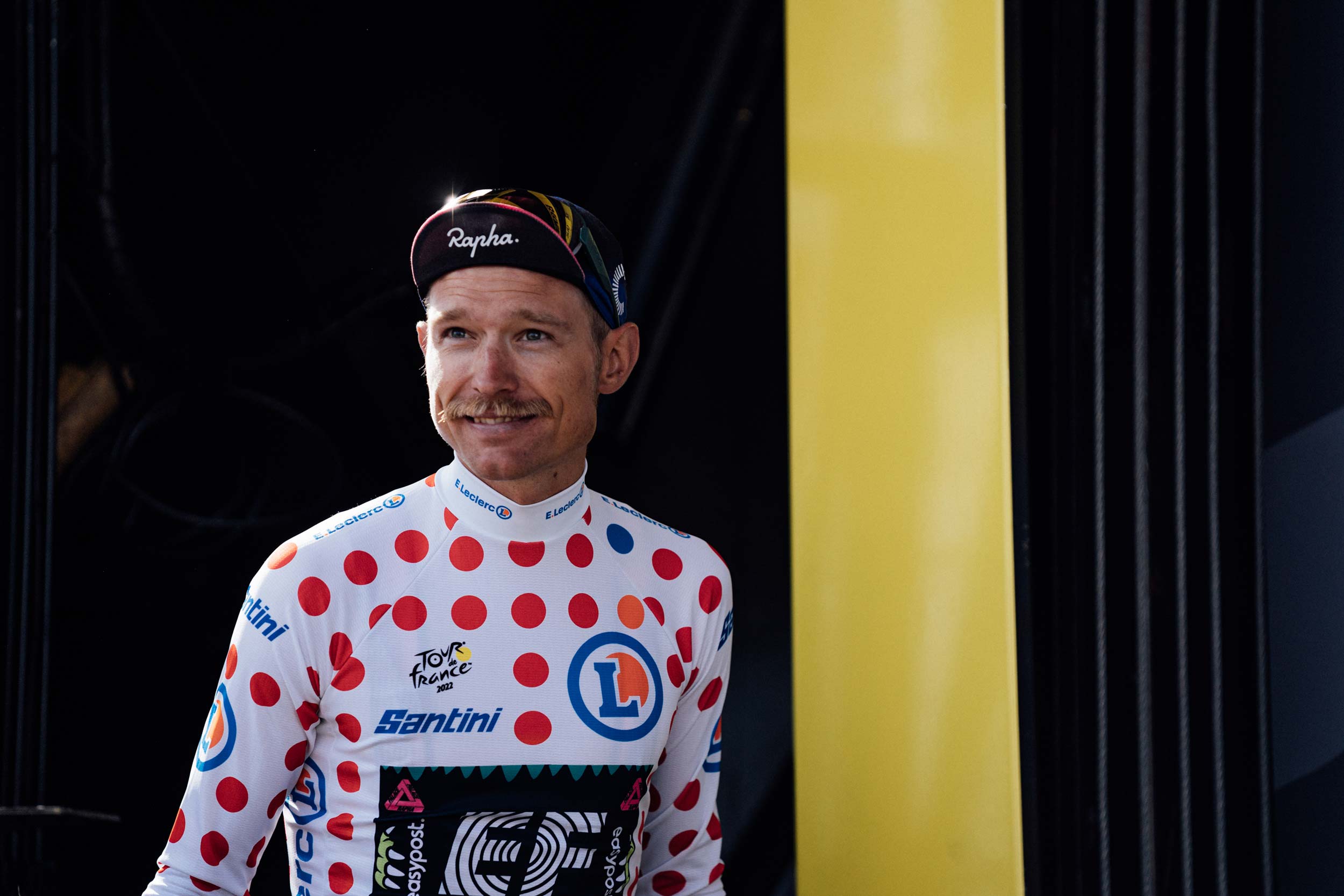 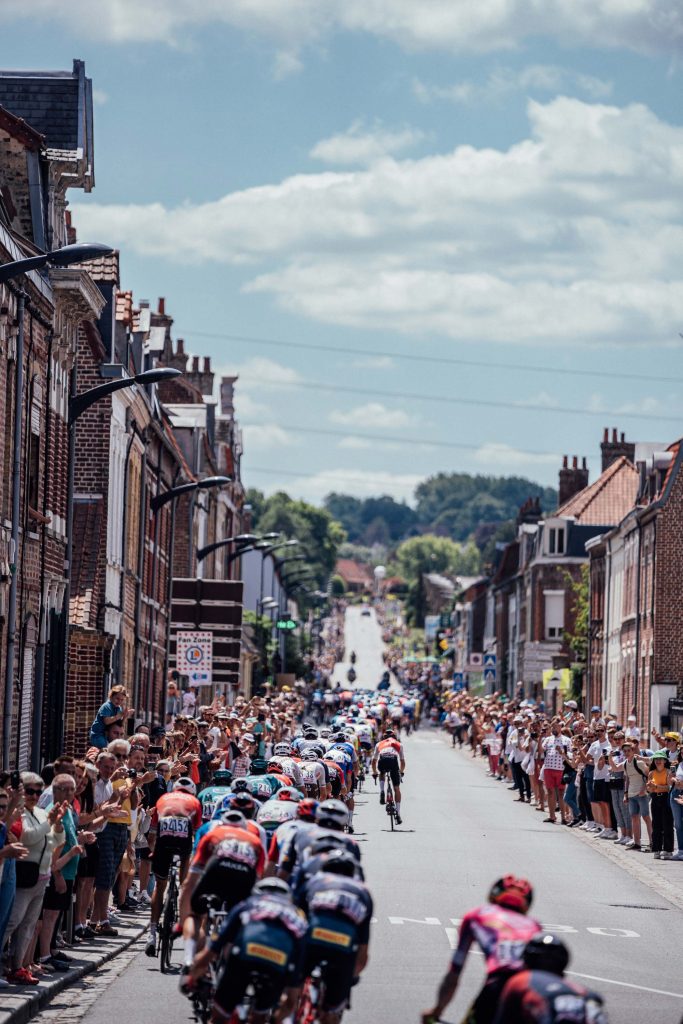 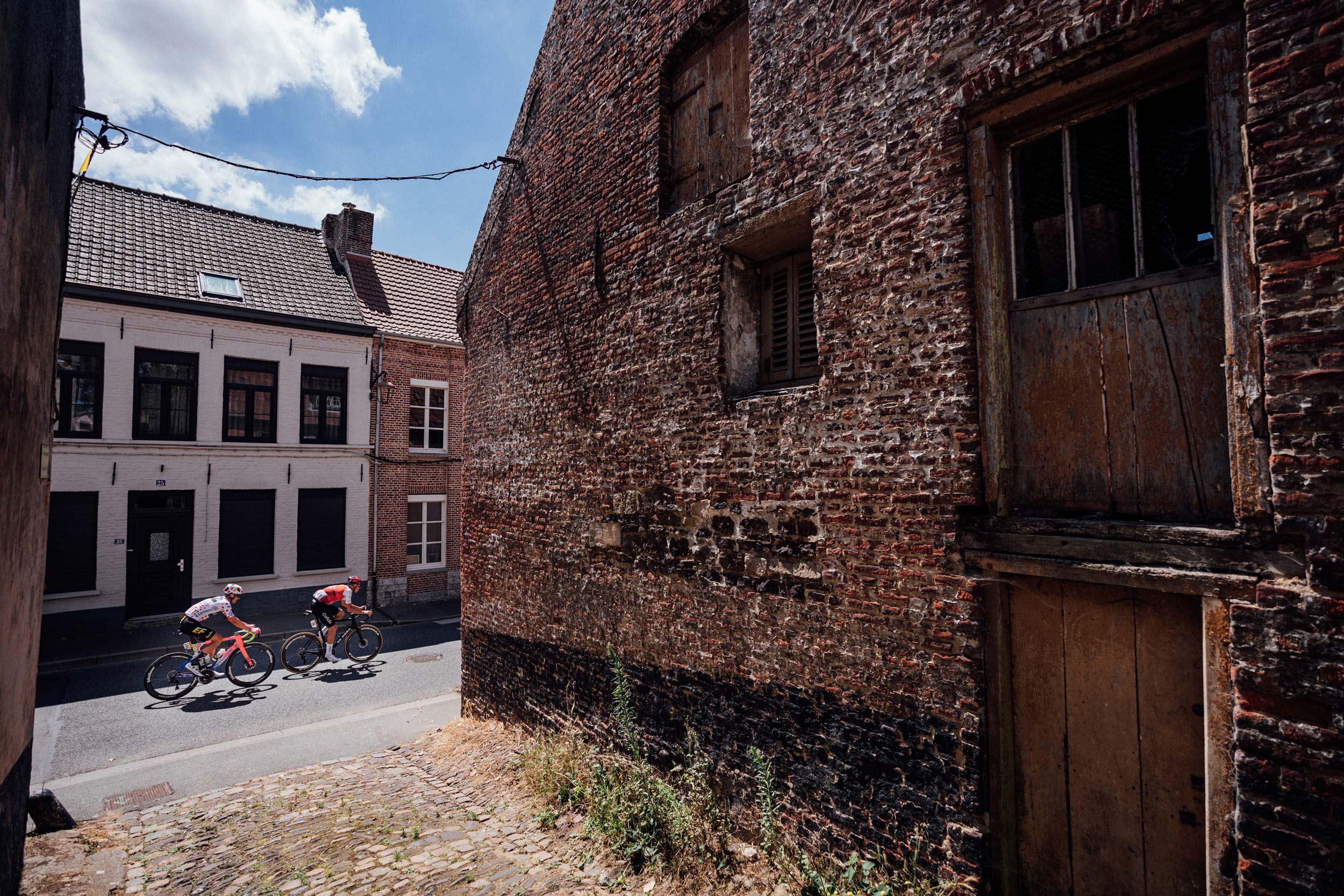 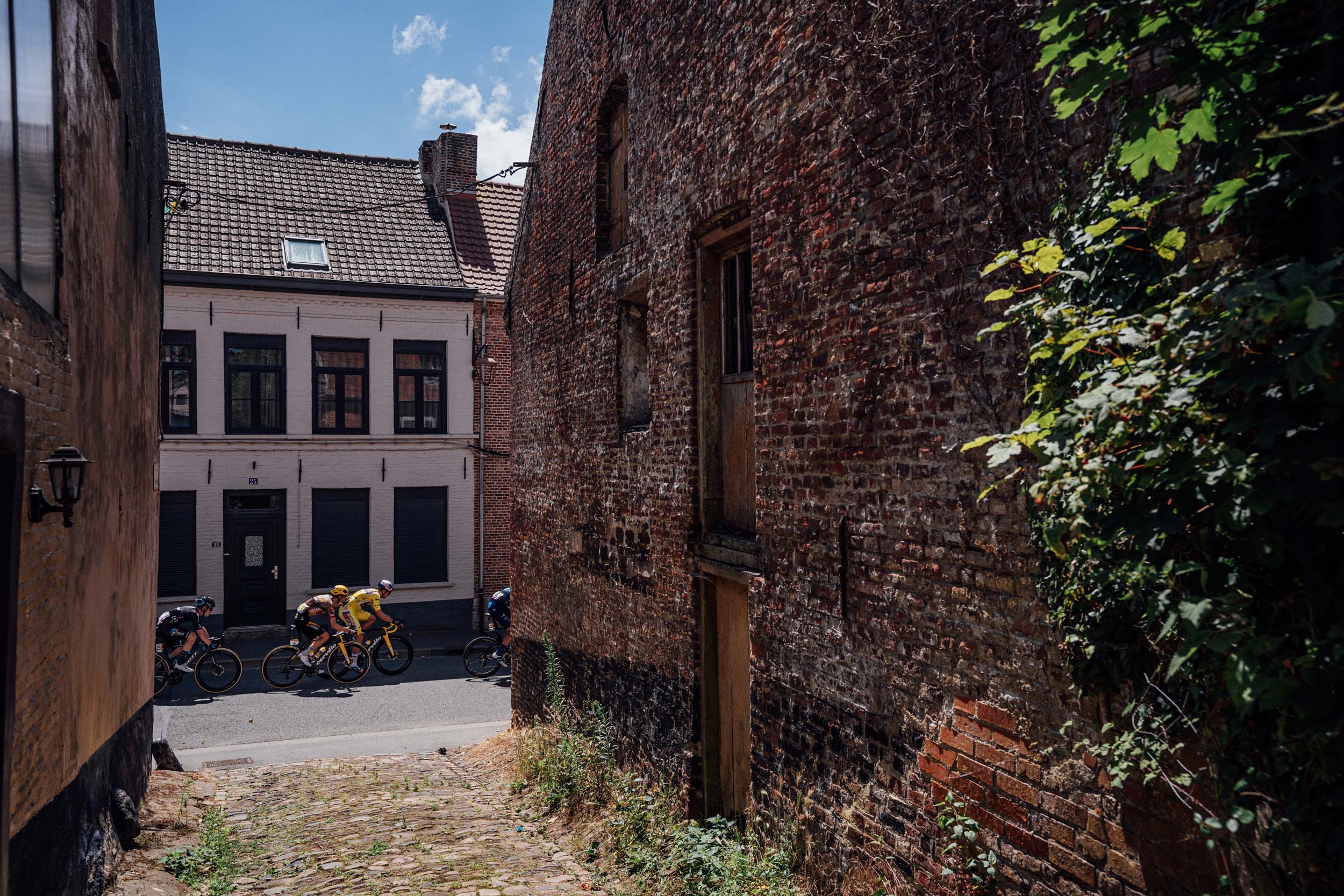