Track worlds: Italy wins TP in 3:47.192… could this impact how Australian cycling progresses?

The Olympic team pursuit champions are now also the world champions. Italy continues to hold the gold standard in this beautiful 4,000m event on the velodrome… could this serve as a catalyst for a rethink of the priorities for Australian cycling administrators?

Never mind that the winning time of the men’s team pursuit at the worlds of 2021 in Roubaix (3:47.192) was five seconds slower than the gold medal ride at the Tokyo Olympics in August. That’s expected. The 3:42.032 world record set at the Games may yet prove to be a once-in-a-lifetime ride and thus it doesn’t take the gloss off what the Squadra Azzurra did 78 days later. 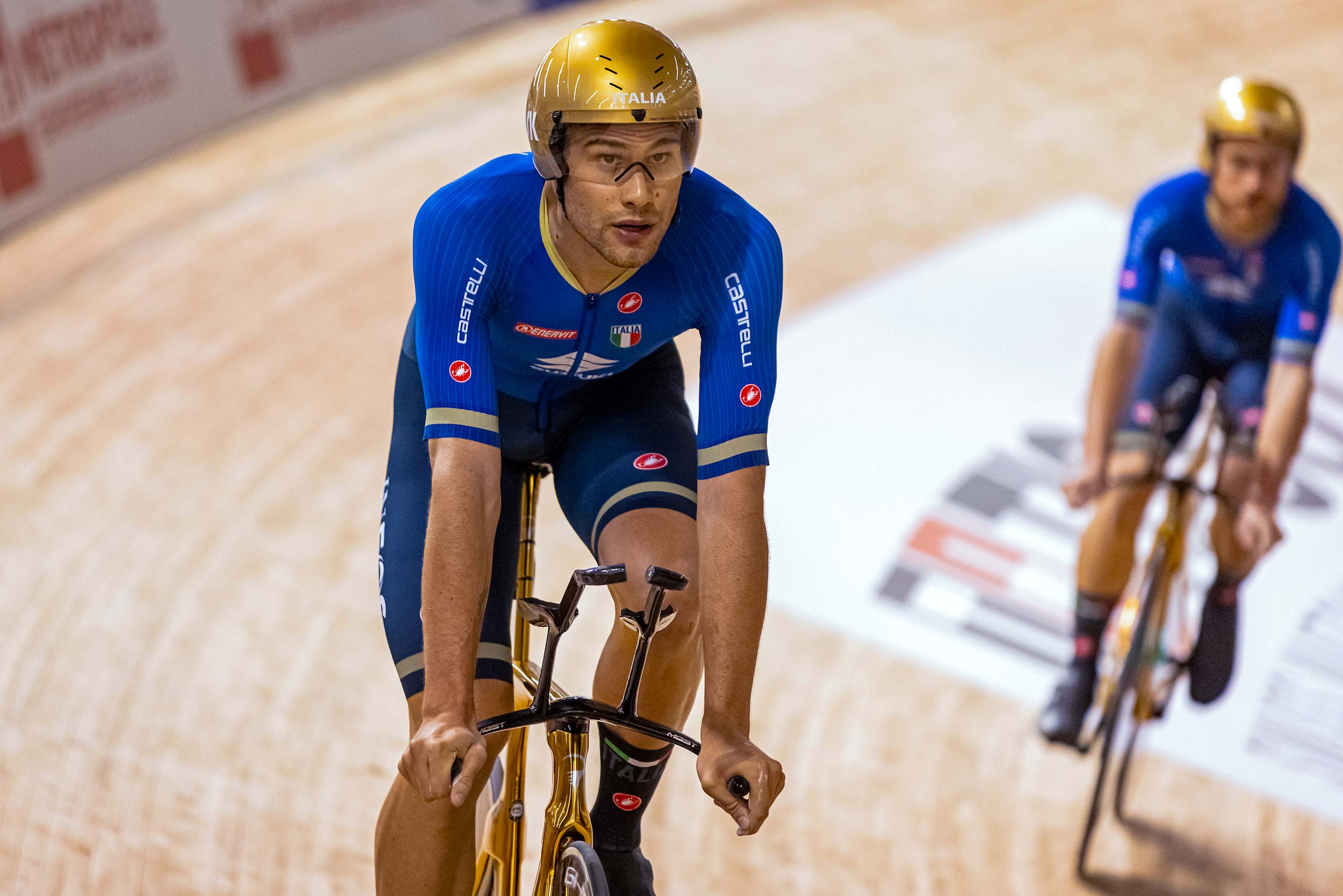 Yes, Filippo Ganna was there on the podium again after doing his thing on the track and piloting the troops to another TP victory. And Francesco Lamon, who won gold in Tokyo and rode the qualifying round in Roubaix, sat out the finals, replaced by 29-year-old Vini Zabù–Brado–KTM rider, Liam Bertazzo.

The other duo from the WR ride in Tokyo, Simone Consonni and Jonathan Milan, were there again too, going fast for 16 laps and effectively taunting the home team that has risen a level in recent months to secure silver. 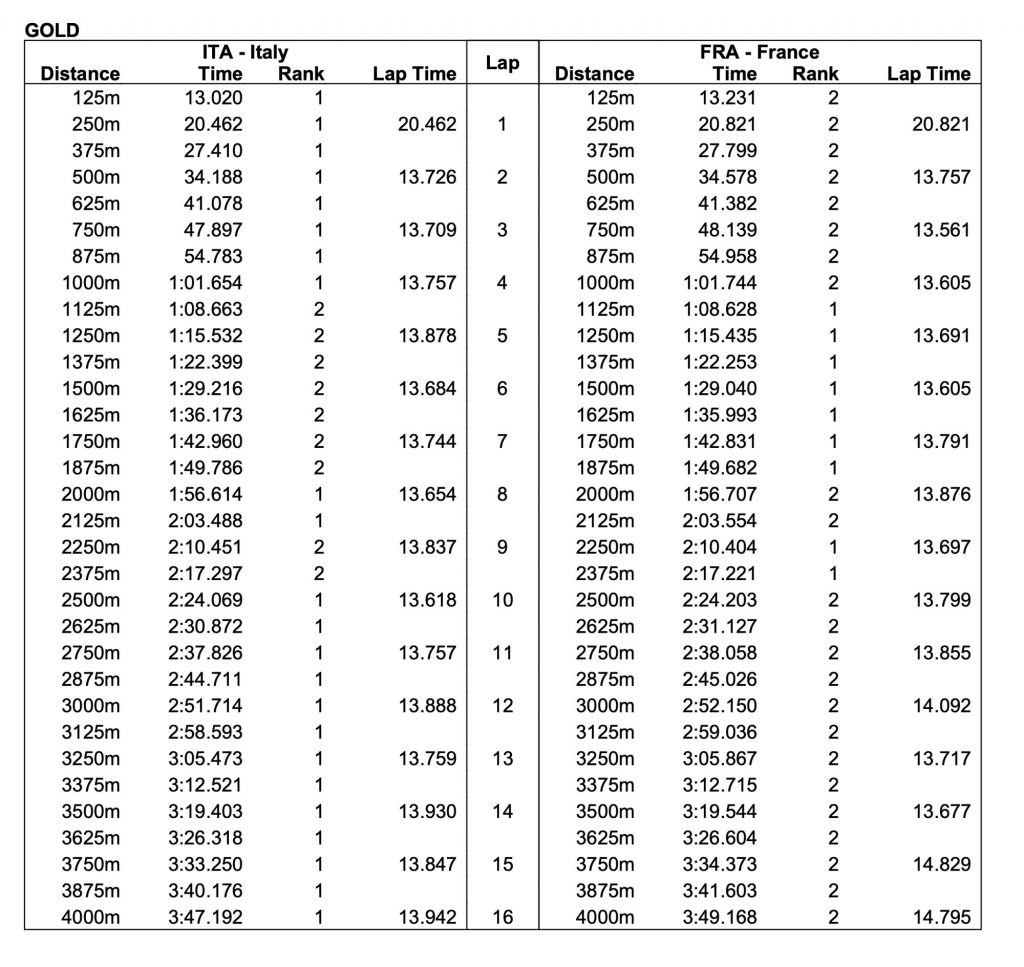 The French quartet set a new national record on their way to an impressive second place against a phenomenal opponent, but the 3:47.816 was done on the opening day of the 2021 world championships. In the final Thomas Boudat, Thomas Denis, Valentin Tabellion and Benjamin Thomas weren’t quite up to that qualifying speed, posting 3:49.168 in the ride against Italy overnight in Roubaix.

There was a time when it was relatively easy to remember all the team pursuits ridden faster than 3:50. The first time it happened was as recently as 2018 at the Commonwealth Games in Brisbane. The Aussie team did that. It was quick and it was like passing a magic mark… 3:50, broken on the way to a gold medal. But in 2021, 3:50 has been within reach of a host of nations as new life seems to have been put into the team pursuit. 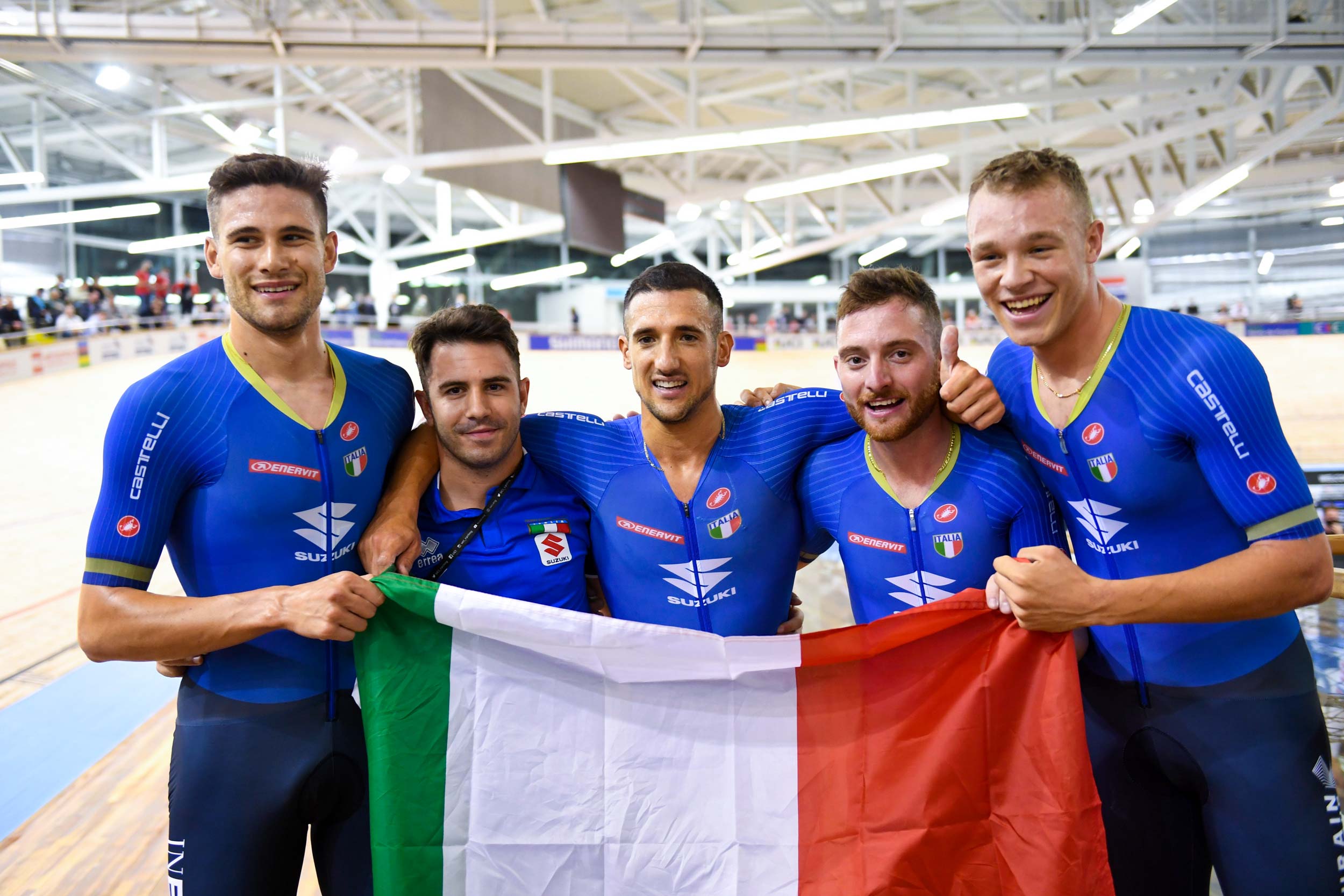 During this new wave of medal-winning candidates racing world-class times, it has been Italy and Denmark that has pushed the level higher and higher but Denmark’s gloss faded in Roubaix, relegated by Team GB to the chocolate medal position, fourth in the worlds. Good, but not quite the 3:42.198 that earned them silver in Tokyo. 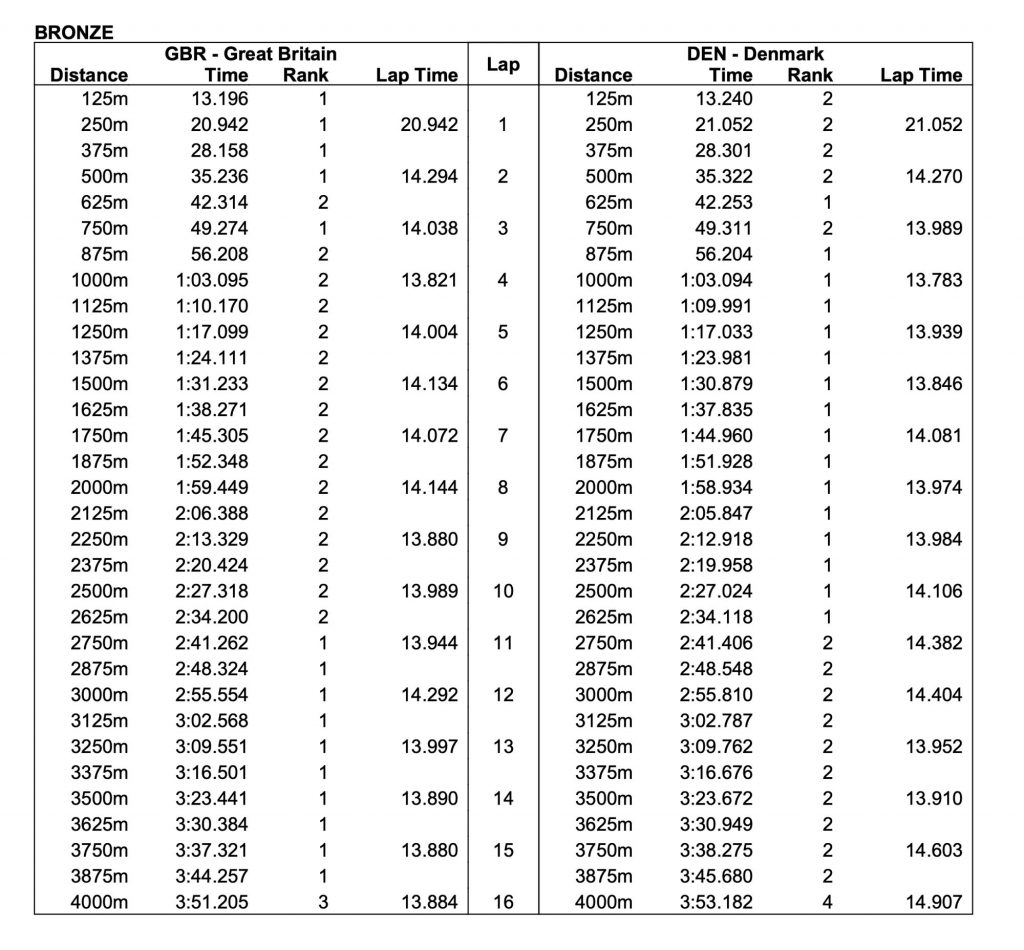 Could Italy’s win be a catalyst for change in Australian cycling?

The evolution of the team pursuit continues. It has been a discipline in which the Australians have excelled but we’ll never know if the likes of O’Brien, Welsford, Porter, Howard, Meyer, Plapp, Scott et al would have been able to duke it out with Ganna and co. The Aussies didn’t get to go. Travel restrictions because of the pandemic have forced a hiatus from worlds competition for most Australian riders. (There are, as has been referenced, five competing in Roubaix, but it’s an abbreviated team because of COVID.)

Perhaps this is a pivotal moment in Australian cycling. For so long the team pursuit has been the major focus of the national team. There has been considerable investment in making our riders go fast for 16 laps and when it comes off and the nation is watching and cheering, it’s a thing of beauty. We see precision riding, teamwork, power, grace and tech all on display and the times tell much of the story about the conquest.

When they go quick, it’s lovely. When they win, it’s thrilling. It has happened often and been the reason for much rejoicing (for the, alas, dwindling crowd that follows track cycling).

Once the gold medal is won… well, it’s time to think about going faster than before and finding an answer to the pace of the ‘new arrivals’ in team pursuiting. That has, at least, been the policy of Cycling Australia for over 20 years, maybe 30… could it even be 40?!

And now? Well, it’s no longer Cycling Australia. It’s AusCycling. The administration is now in charge of a more diverse range of cycling disciplines and, as beautiful as the team pursuit is, now would be an appropriate time to shift priorities and give riders in other disciplines a go. The team pursuit has been a staple of our national program for a long, long time. But the forced hiatus will give the Aussie team time to reflect and consider the approach to how funding is allocated in the future.

Let’s hope a bit of common sense prevails and we see some investment in some of the other things that make cycling beautiful. Of course, the talented riders we have for the TP are still going to be motivated to try and take on the Italians when they next get a chance, but there are a lot of other wonderful things in this cycling caper. And, in my appraisal, a good place to start spending would be at the grassroots level.

It’s a great shame that there are only five Aussie riders at the worlds in Roubaix but we understand why it has to be that way. Still, let’s hope it’s a catalyst for a much needed change in thinking from the administrators in the coming months. 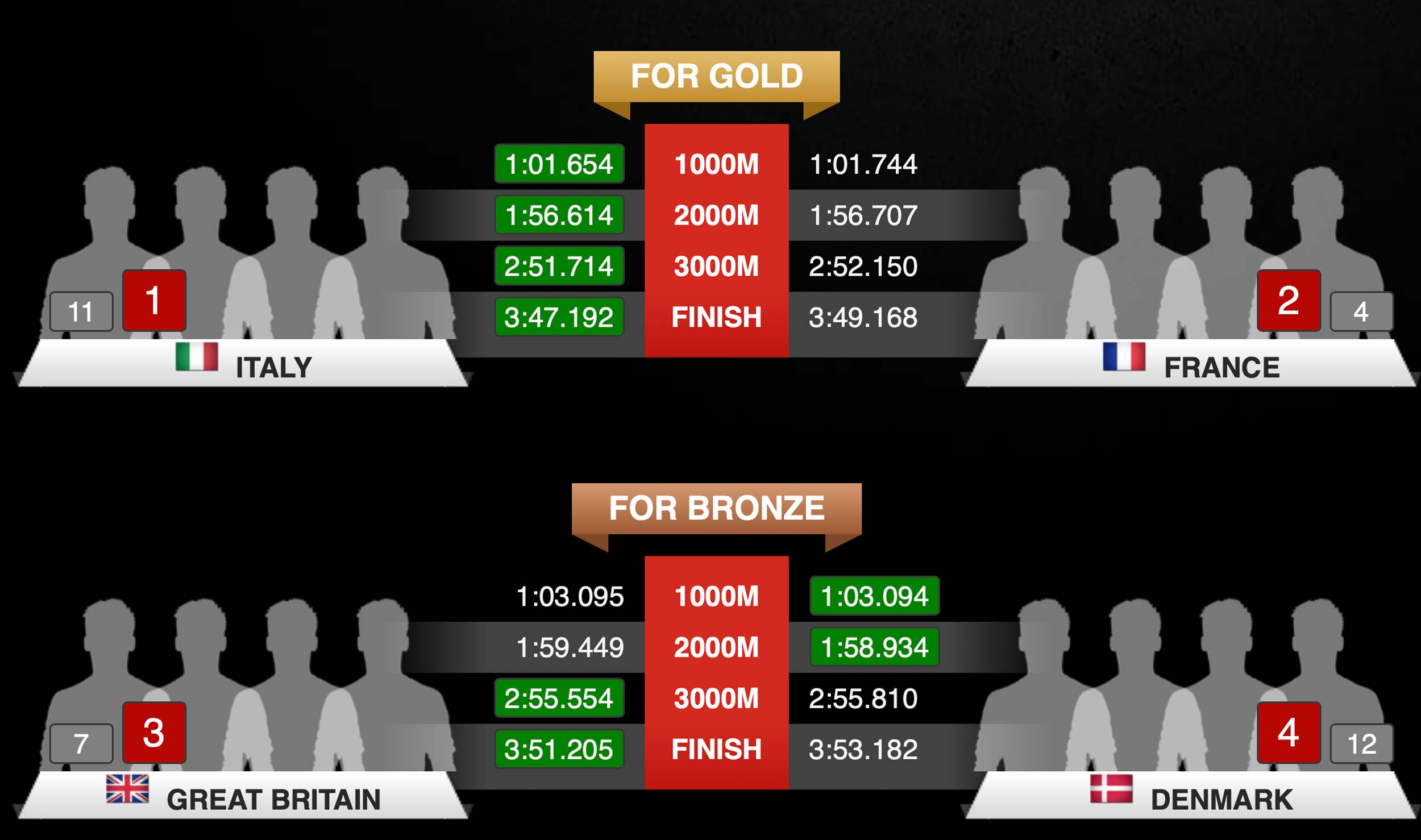