The first weekend out of lockdown served up strong winds for a southerly ride on Saturday, and glorious conditions for a Sunday cycling adventure. Two rides: first south, then north – a great way to rediscover Sydney.

Last Monday I did a largely ceremonial final ride on the home trainer. The Tacx Neo 2 and FulGaz helped save my sanity during the Sydney lockdown of 2021 and grateful as I am for the exercise I hope that style of riding is over for a little while.

Now that we’re free to roam again in Sydney, I’m happy to be back riding on the road with a smile, and I’m also seeing things differently. Although I’ve been visiting familiar sites, it all feels new again and the rotten weather last week even added to the thrill of returning to the road. Of course, I’d have preferred the glorious conditions that were so prevalent for months – blue skies, a light breeze and minimal traffic – but it didn’t play out that way.

Still, there was a little ray of sunshine on Saturday and bright blue skies for Sunday. Bliss! Ah, but before I gush too much, did I mention the wind? The BOM said it’d get gusty and the BOM was right.

Saturday’s ride started out as a #TouristInMyTown pootle to Bald Hill and back to the city and ended as a full-on #ProductReview, with the Zipp 353 NSW wheels scoring well in the ‘holy dooly!’ stakes. 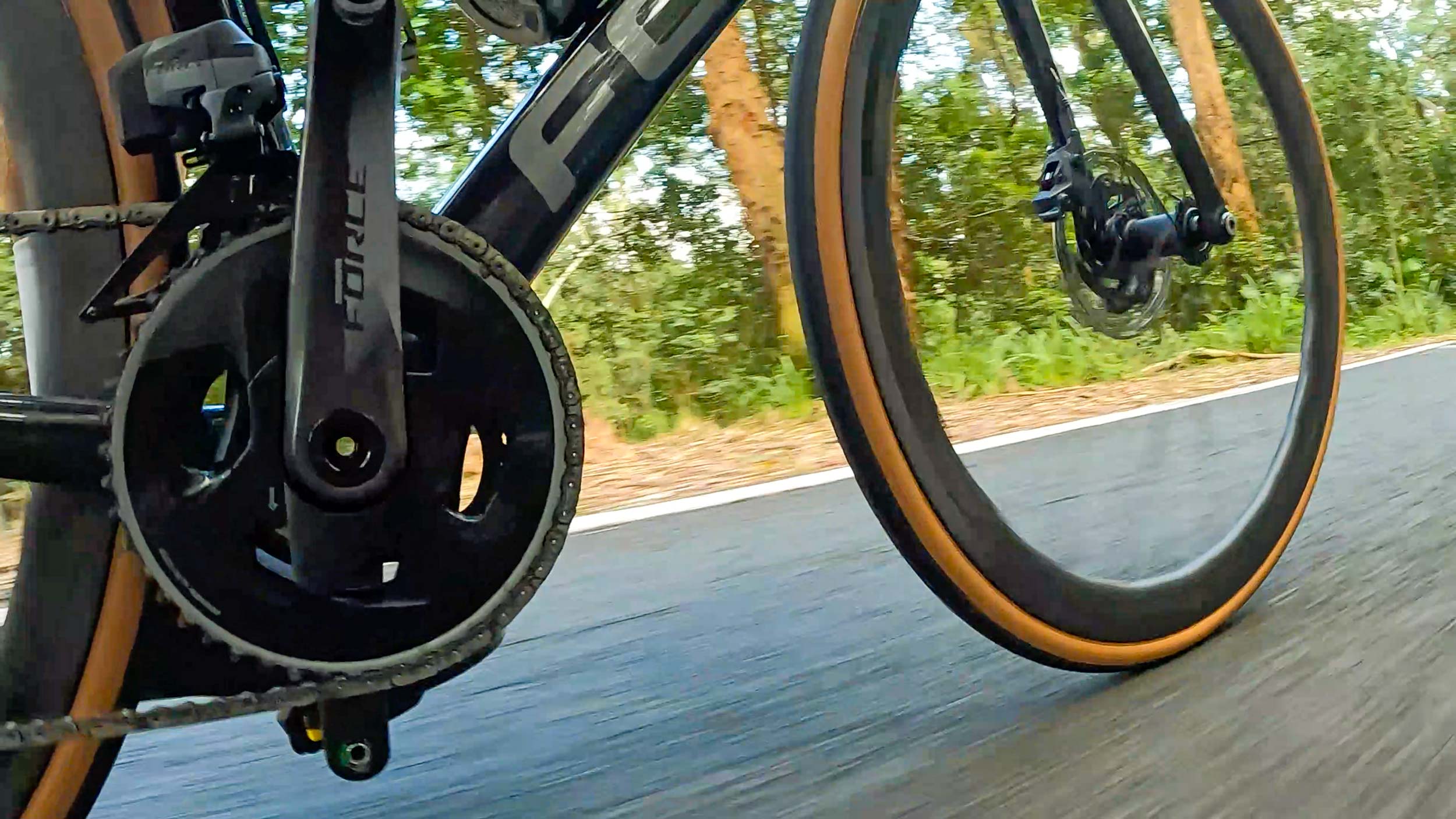 A 50km/h westerly provided answers to the question: how are those wheels in crosswinds? Actually, I’d tell myself (and now you), they’re terrific! Better than I imagined they’d be, in fact. In places where I’d ordinarily have been holding on tight, focussed on not being blown sideways, I was comfortably tapping away on the pedals, chatting to the camera, riding one-handed… and thinking, ‘This is all a bit too easy.’

In truth, it was quite strange. Do the wheels deserve all the credit for this surprising stability? Yeah, I think so. What else would it be? It’s not like I’m heavier and therefore less prone to being blown around. If anything, the time off the bike (96 days without a ride outside) had made me more anxious than confident… but my trepidation lasted only a couple of days. By the fourth ride since lockdown (ie. Saturday) I felt at one with the bike and the result is a long #StoryOfMyRidevideo that I’ll soon post on YouTube as part of a series about my return to riding on the road.

When the COVID infection numbers in Sydney were on the rise and we were stuck, I began the #LockdownReview series. The idea was to talk about products and things that I found to be of use while riding inside… but the novelty soon wore off. You can find a few videos on RIDE Media’s YouTube channel, but there’s a lot more that remain unedited. Watching a bloke riding on a stationary bike, with two screens in front of him for company and puddles of sweat forming below isn’t exactly riveting viewing.

I’m happy to be riding outside again and I’ve been recording my experiences. After only five days, there’s a rapidly growing catalogue of commentary about riding and bikes (and other associated stuff) much of it filmed in postcard-settings of glorious locations in and around Sydney.

It started again last Tuesday afternoon, a nervous short ride to La Perouse and back. The Wednesday ride was put on hold by torrential rain. Thursday and Friday saw my return to the ‘Mosman Alps’ and my reflection point at the Cape Banks turnaround.

By Saturday the clouds (of doubt) had cleared and blue sky begged for a longer ride.

There’s a lot to like about being able to ride where and how you want to. Get your kit on, pump the tyres, grab a bottle of water, whack a banana in the jersey pocket, turn the daylights and the Wahoo Elemnt Bolt on… and ride. What comes next is anyone’s guess.

Go where the road leads you and, as I’ve realised for years, the stories inevitably flow. 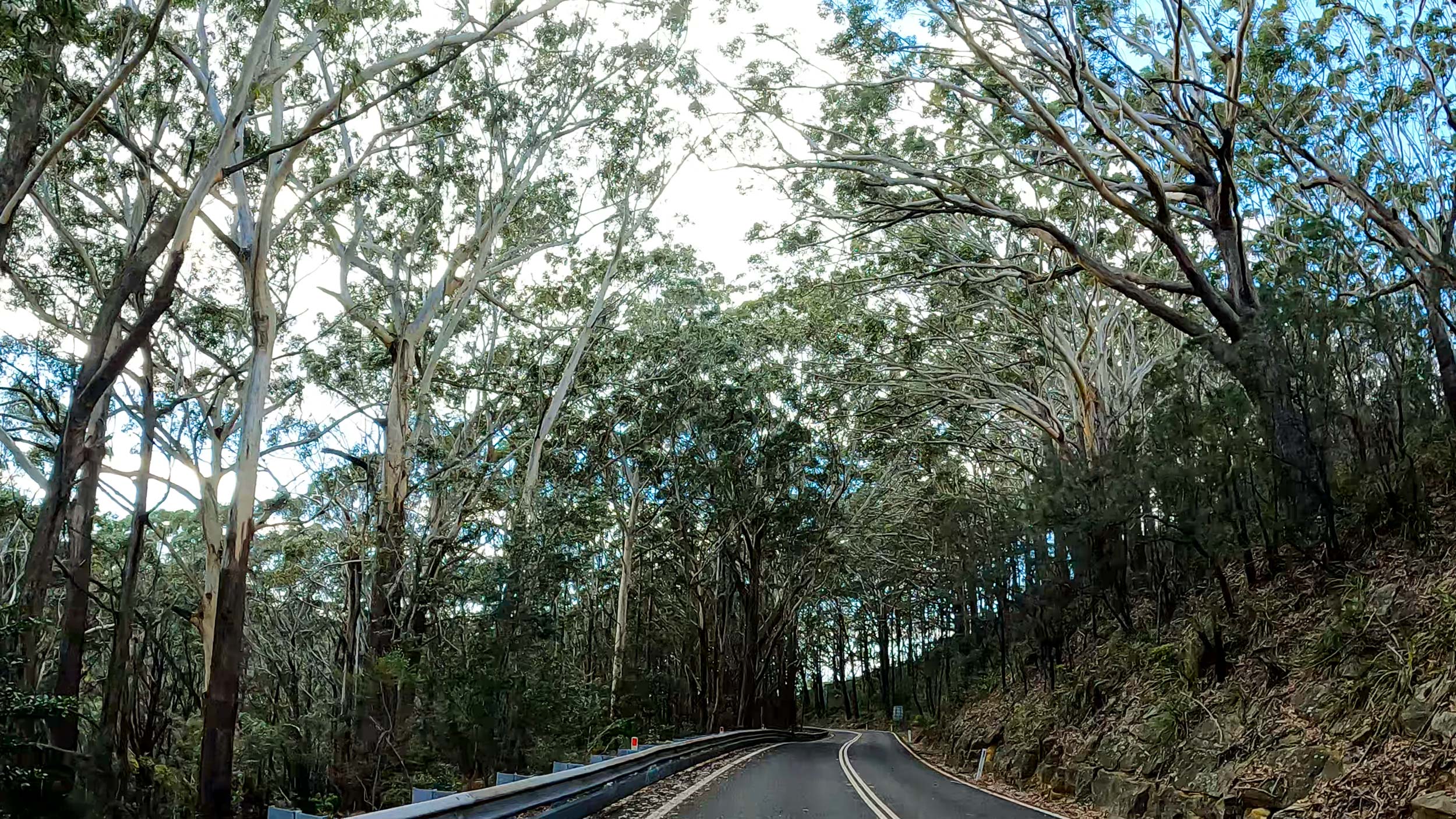 It was early when I set off on Saturday and after considering the warnings about wind from the BOM, I decided to go… well, wherever I wanted. If the conditions got feral, I’d just deal with it.

I wanted to go south, to Bald Hill, to stand on that precipice and look down on the ocean to the east, the Sea Bridge to the south, and the Royal National Park to the north. It’s a ride many cyclists in Sydney have done often and options open depending on your mood.

Aim south and turn left shortly after Sutherland, dip down through Audley and watch as the Aussie bush changes dramatically as you go from one climb to the next and wiggle your way towards the park exit near Stanwell Tops.

Second option: ride in the breakdown lane with 100km/h traffic in the right-hand lanes as you steadily add climbing metres to your Strava file along the Princes Highway for another ±15km. Then, veer left and up the exit ramp at Waterfall before dropping down into the National Park via McKell Avenue. The fun descent leads you to the Hacking River causeway and the right-turn at Lady Wakehurst Drive. From there you ride back up to towards the coastal ridge through lush rainforest, listening to bird song and looking at the confused and contorted angophora branches high above.

Then there’s the third option that I went with (by pure coincidence rather than because of any planning): ignore the Waterfall exit, dip down to where the road splits and effectively becomes the gateway to Wollongong (‘UCI Bike City’, and future site of the world championships), wait for a break in traffic and dash across two lanes of the Princes Motorway to get to the Princes Highway. (Most motorists take the motorway; day-trippers, cyclists and moto riders generally take the highway.)

Follow your nose and eventually all three options send you to the unmissable Bald Hill lookout. I’ve been to this place often and it is always stunning.

By the time I was speeding down Lawrence Hargraves Drive on Saturday morning, the westerly wind had picked up to ±50km/h just as the BOM had predicted. It forced tall trees to tilt and, blowing from behind, sent me quickly to my turnaround point. 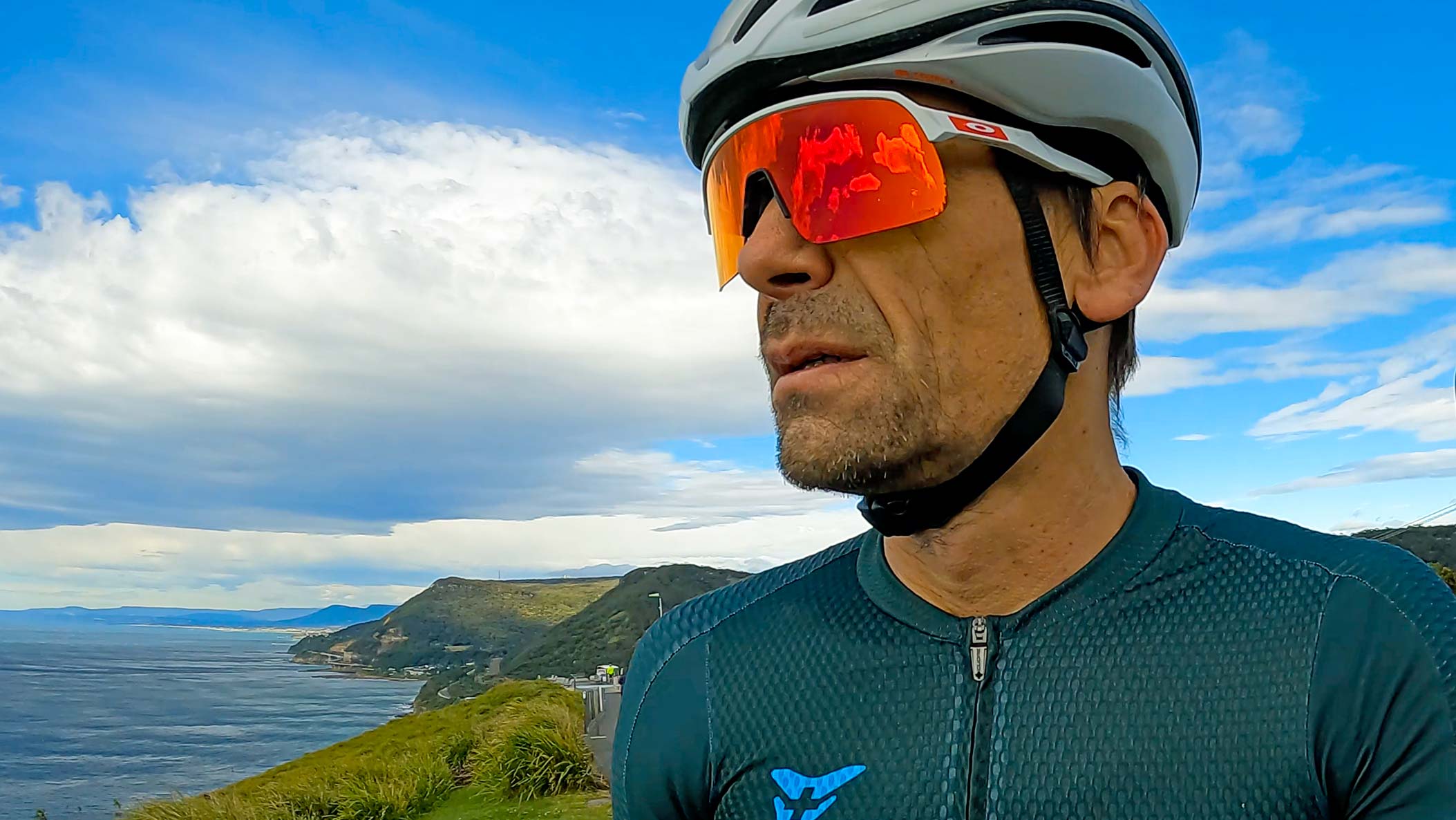 There were no colourful parrots picking up crumbs, no picnics being prepared, no hang gliders waiting on the grassy verge, no cycling bunches stopping for a coffee. Instead of these usual scenes at Bald Hill, there was wind, wind and more wind!

With a charge of adrenaline after a 70km/h downhill sprint with a tailwind, I rolled into the carpark at Bald Hill to see a Meet-Up of motorcycle riders and a few souls who’d climbed out of their cars to catch the view but were now trying to shelter from the strong westerly.

It was a violent wind that made you think twice about getting a little closer to the edge of the hill for the obligatory photo op.

While I was there on Saturday, I opted to swap a GoPro battery, refill my drink bottle, and taking a very quick video of the coastline leading to Wollongong. And that was the end of my visit.

The wind blew through me and blokes on chunky Harley Davidsons and Ducatis alike sympathised with me in my lycra and a 7kg bike. “It was pushing us around mate,” said one bloke from the moto Meet-Up, “so it must’ve been terrifying for you!”

“It wasn’t too bad,” I replied, surprising even myself. “Don’t know why, but I felt stable.” (More on those Zipp wheels in a later story.)

And then it was time to ride again. Back towards the north, through The Royal – past the Garie Beach and Wattamolla turn-offs – along Sir Bertram Stevens Drive with views of bush and ocean. 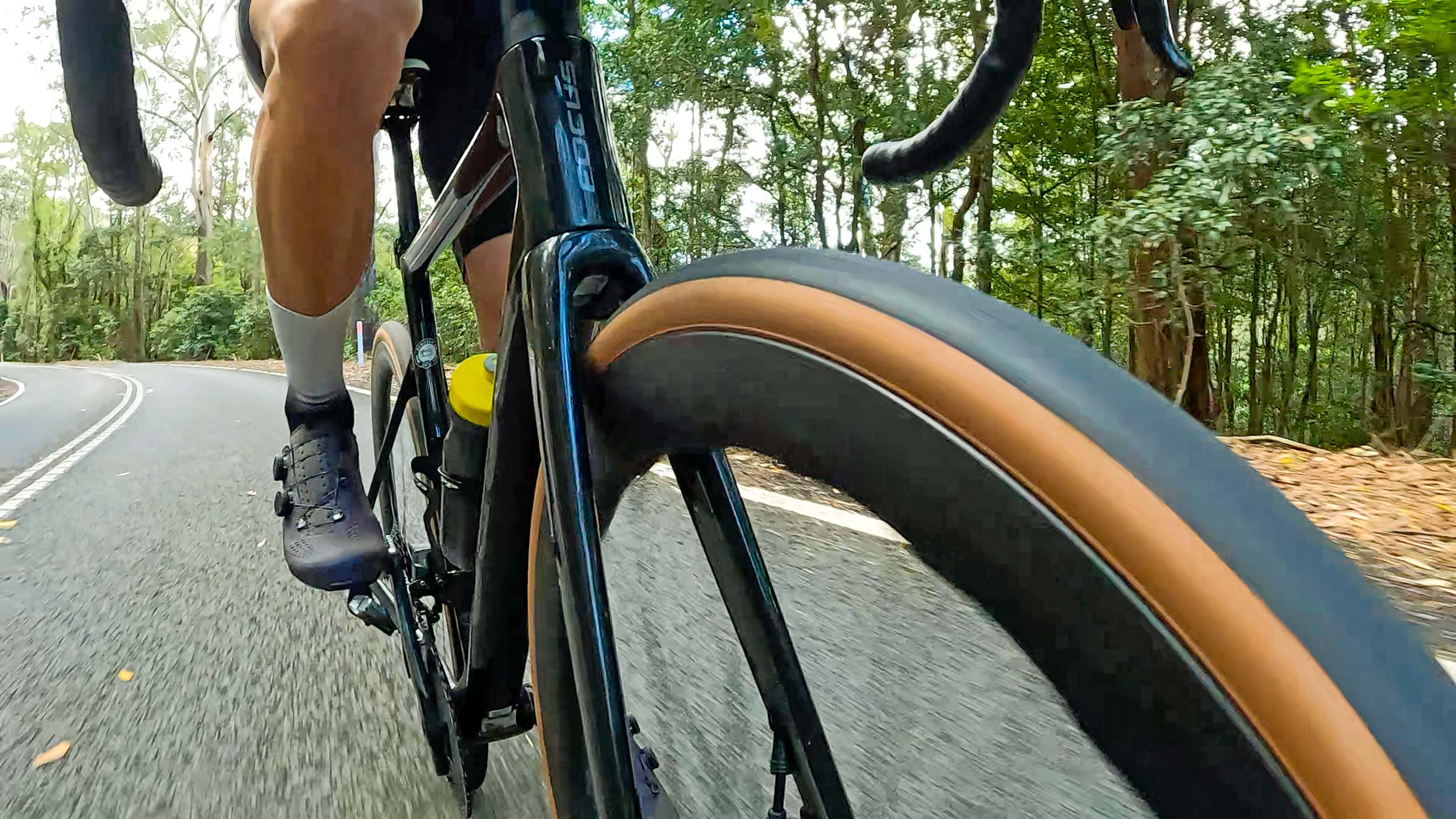 It would amount to 115km in all manner of conditions, on all kinds of road surfaces, with an array of distractions and interactions. It was a bit over four hours on the bike and turned into much more than just another workout. Yes, I got exercise, but that was a by-product of the experience. It was cycling as I’ve done it often before, but it felt new again – exhilarating and fun – and it ignited my senses.

Scene on my ride today.#SlowTV – testing wheels and a new camera on a windy Saturday ride. Here’s a clip to showcase both products.
Zipp 353 NSW wheels: Fanasttic!
GoPro Hero10: pretty steady at speed, huh? I’m getting used to it.

Nice to be riding outside again. pic.twitter.com/dE1E79oHHN

In time, last Saturday’s ride will blend in with the thousands of other days I’ve spent on the bike but for now the vision collected has been replayed numerous times in my mind as I look back fondly on that first decent bike ride since lockdown. That’s what cycling is for me. It creates an adventure, provides a chance to see the world, and makes me feel both vulnerable and invincible at the same time.

It was a taste of living and it gave me a few hours to cherish. Cycling can do that for me on most weekends but after riding inside for so long, the joy was magnified, and it left me feeling most satisfied. I can’t wait to do it all again one day soon. 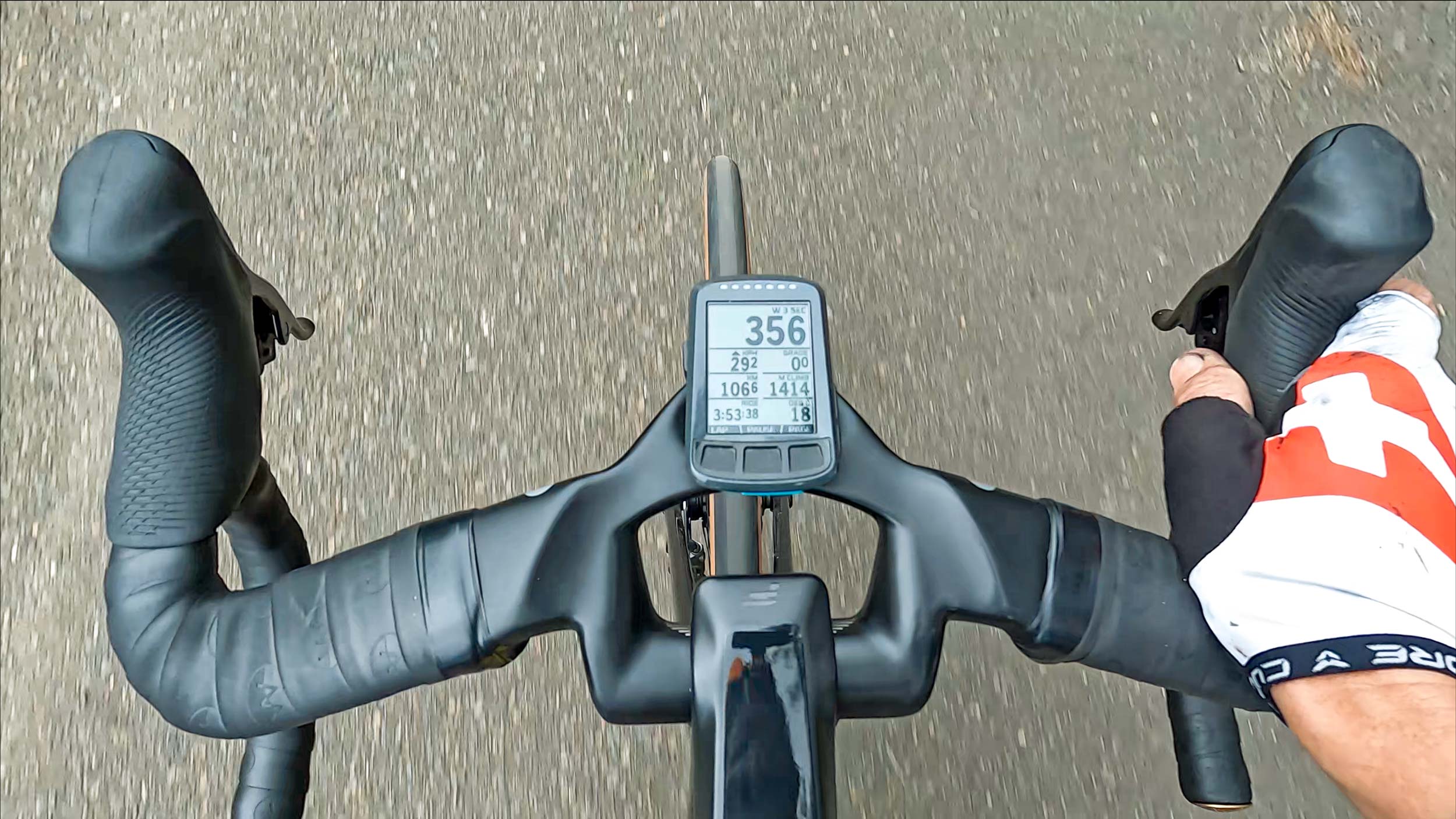